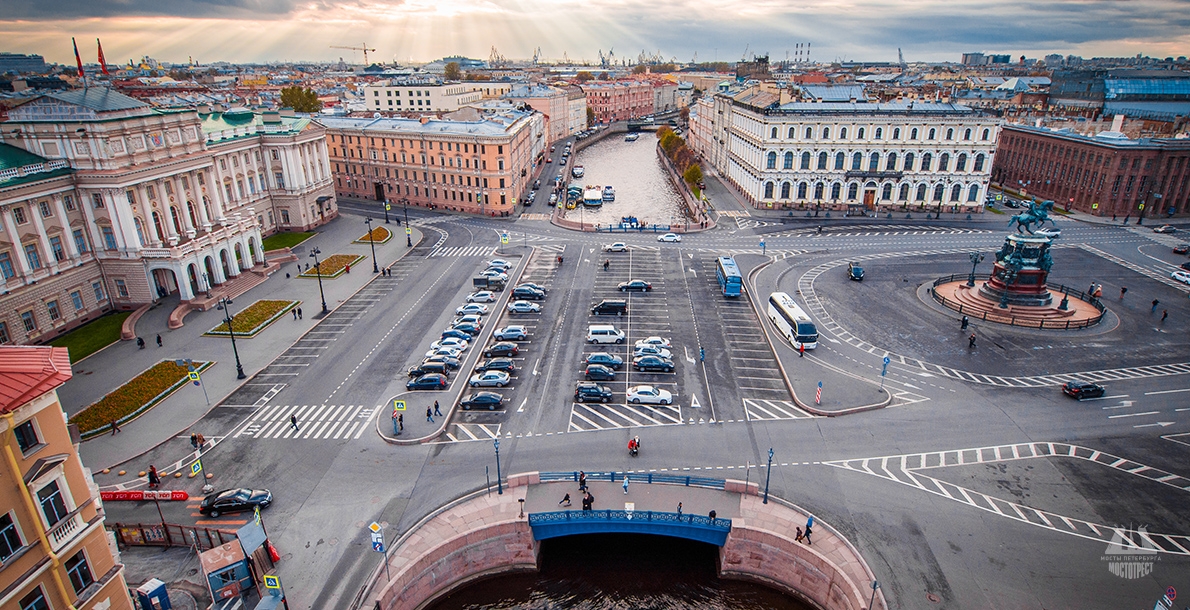 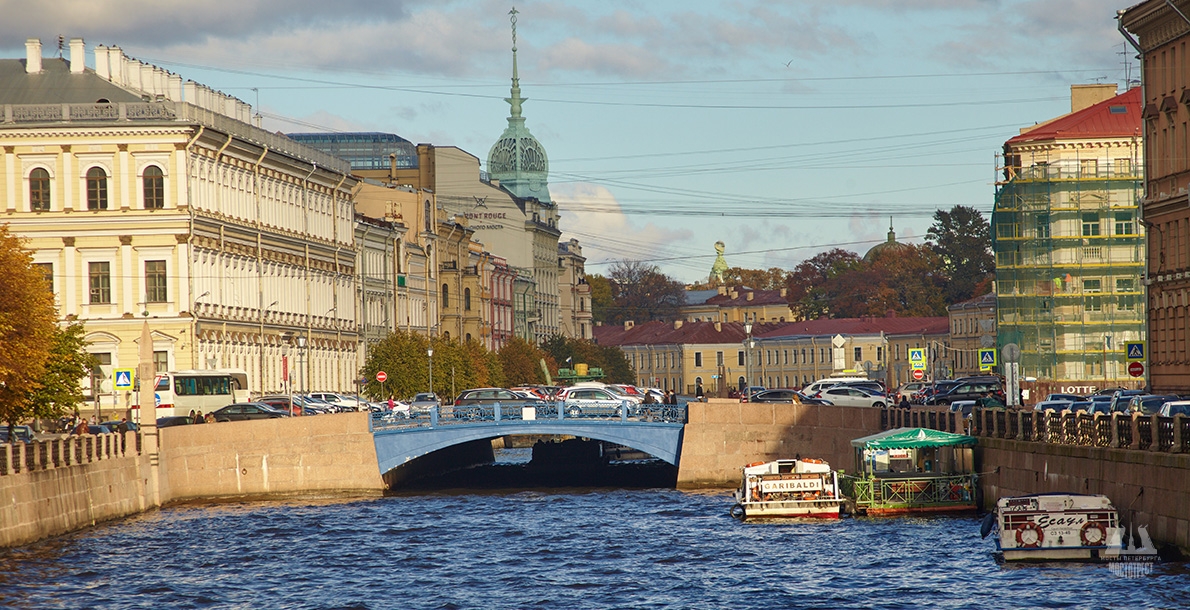 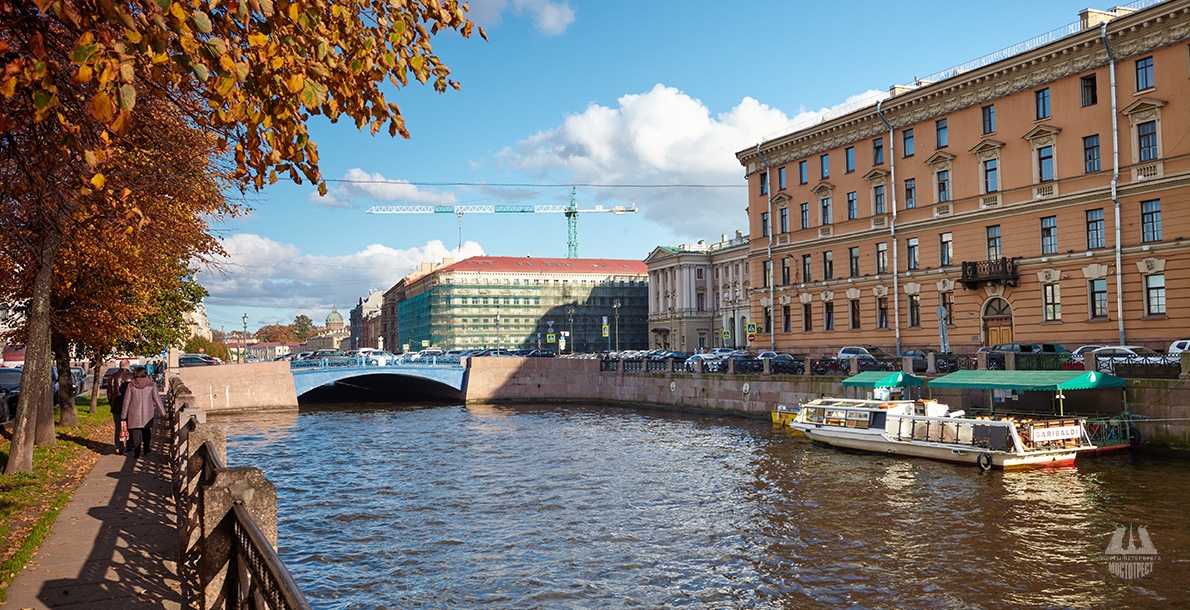 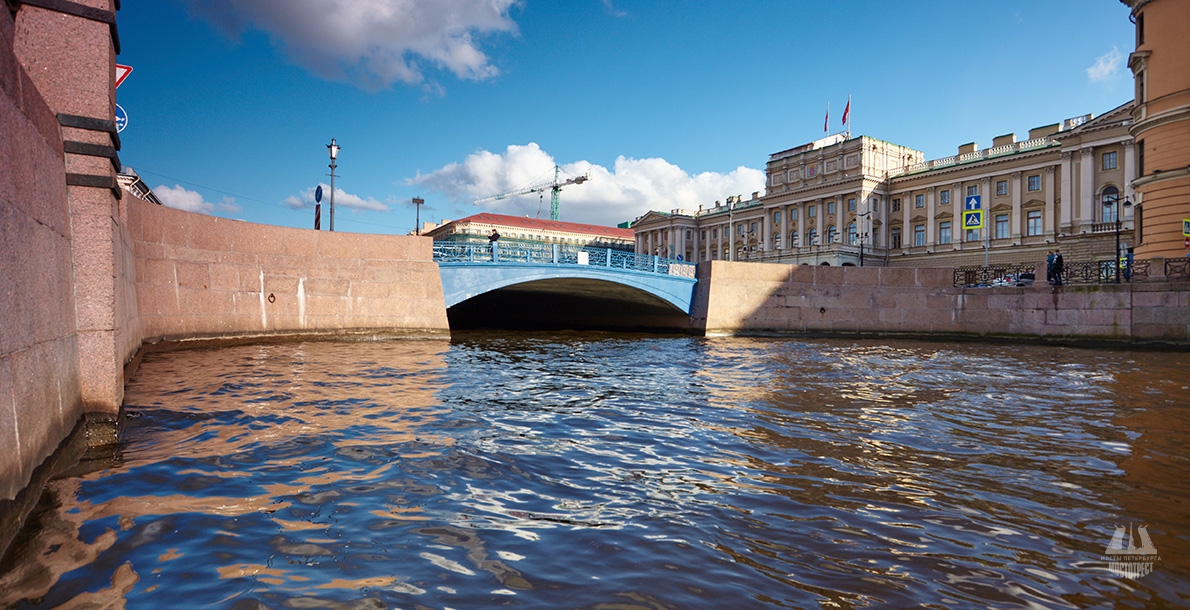 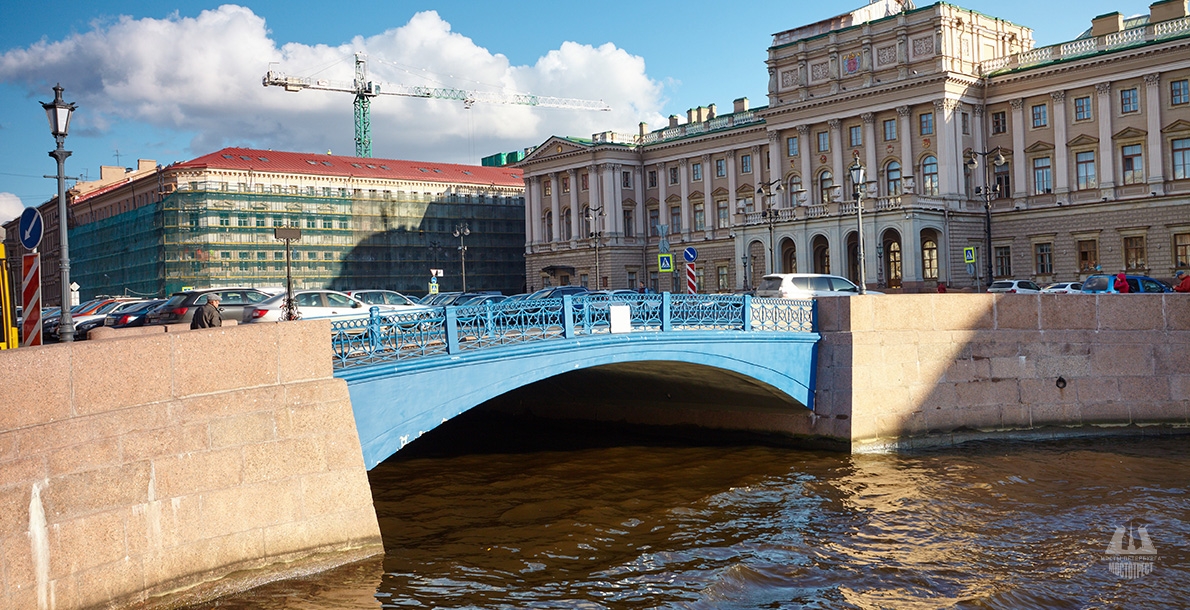 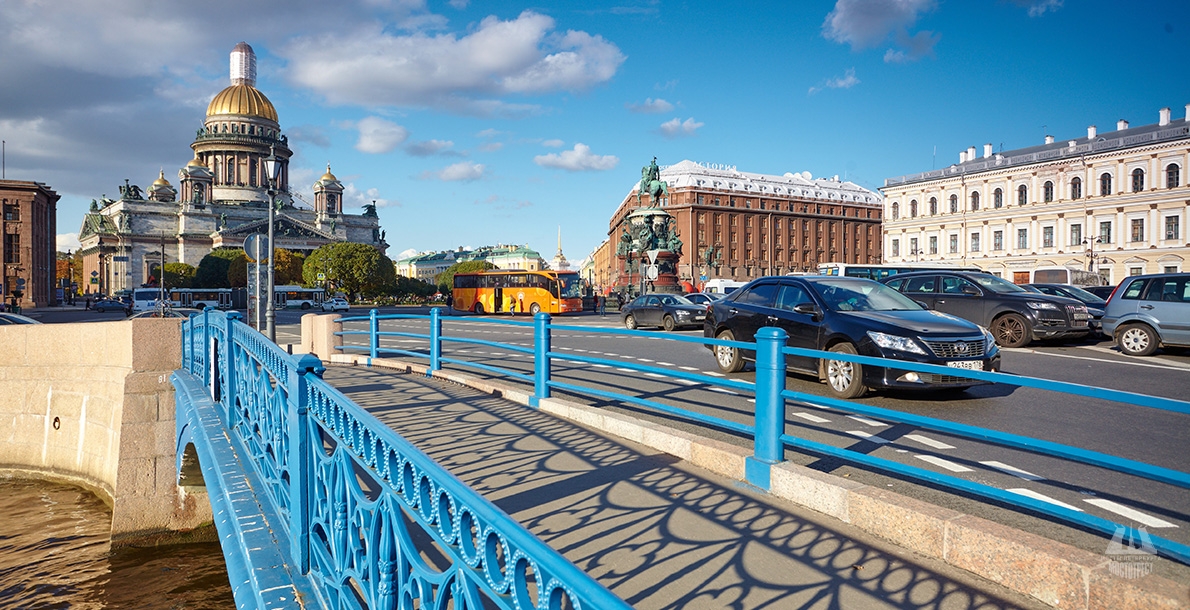 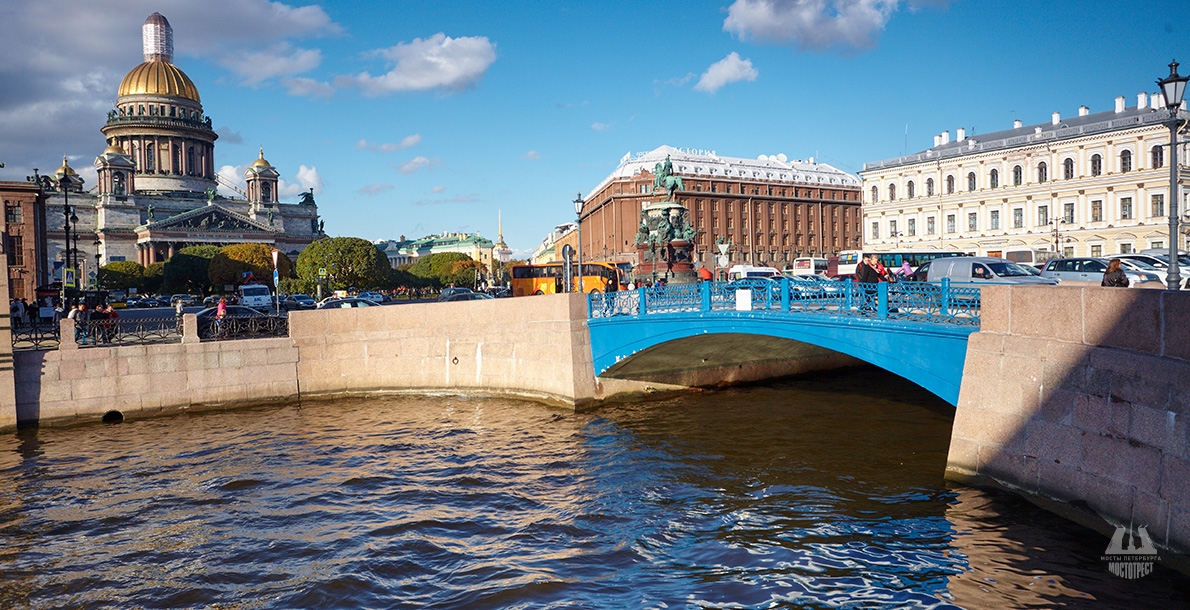 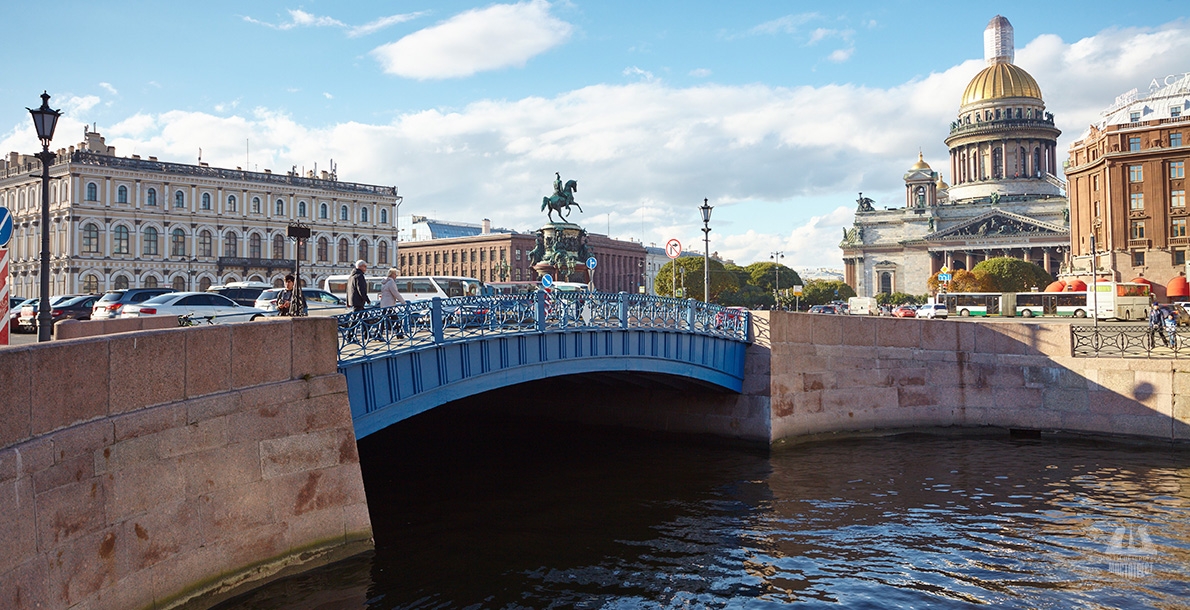 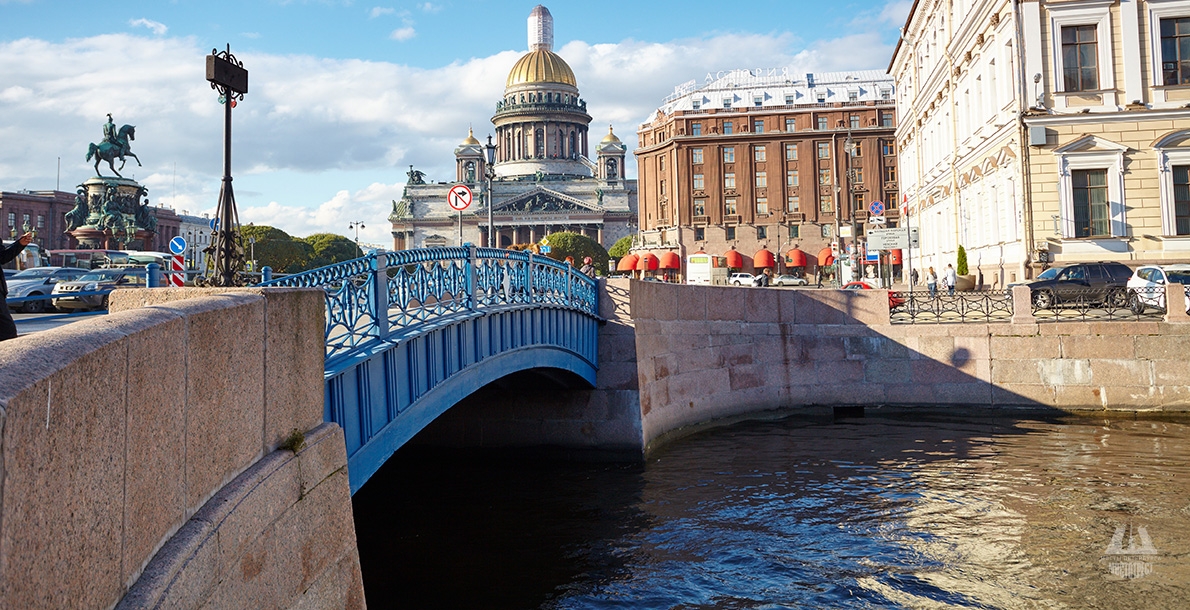 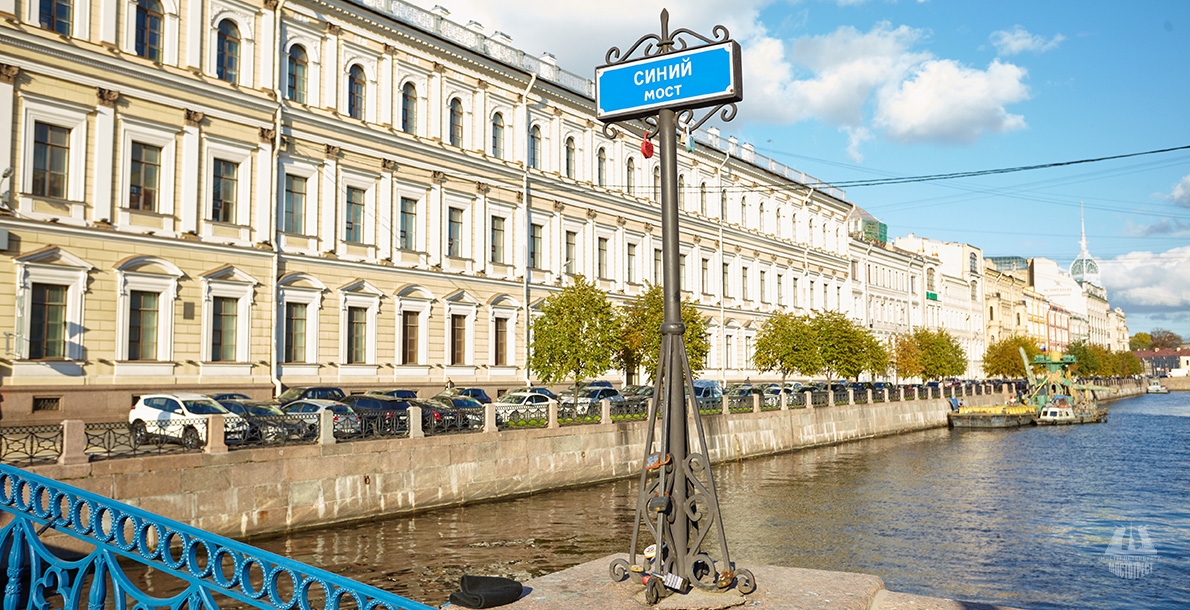 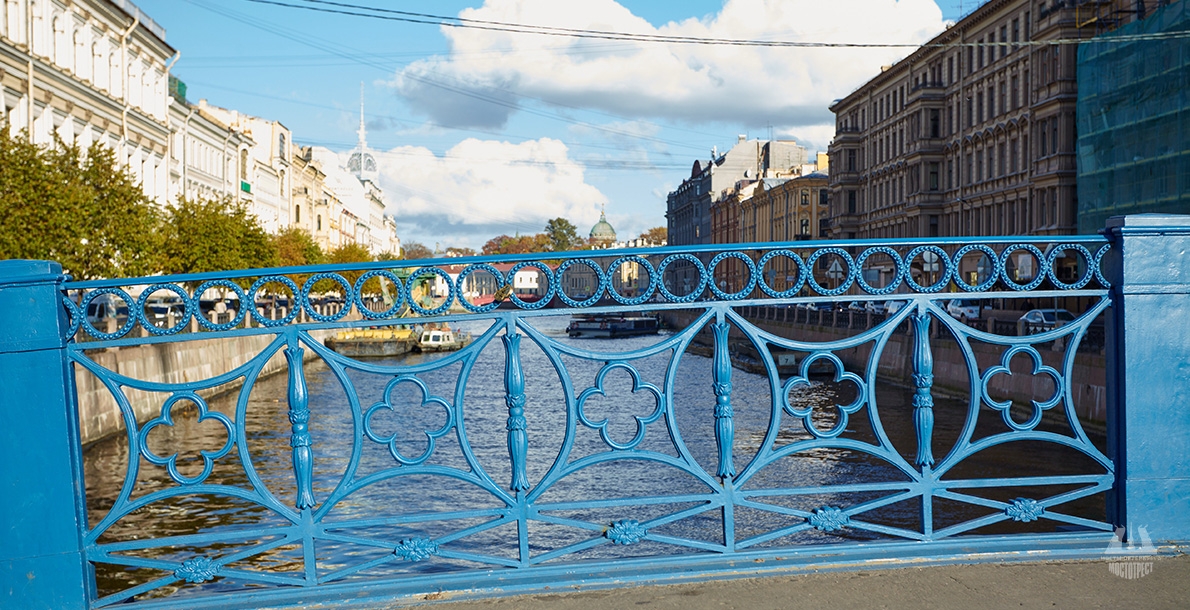 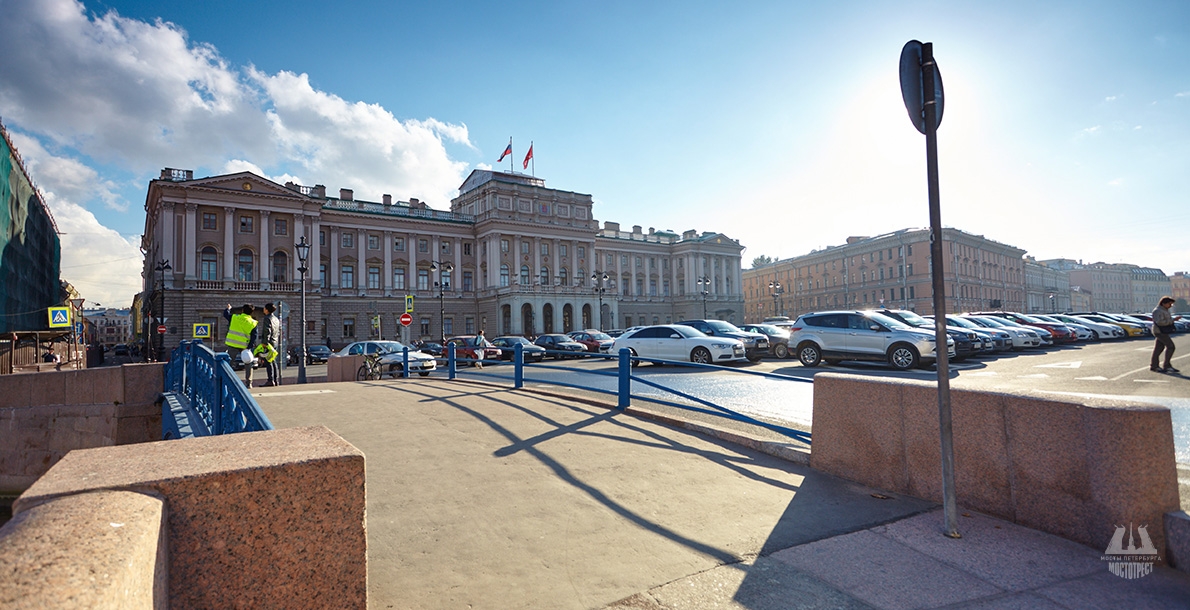 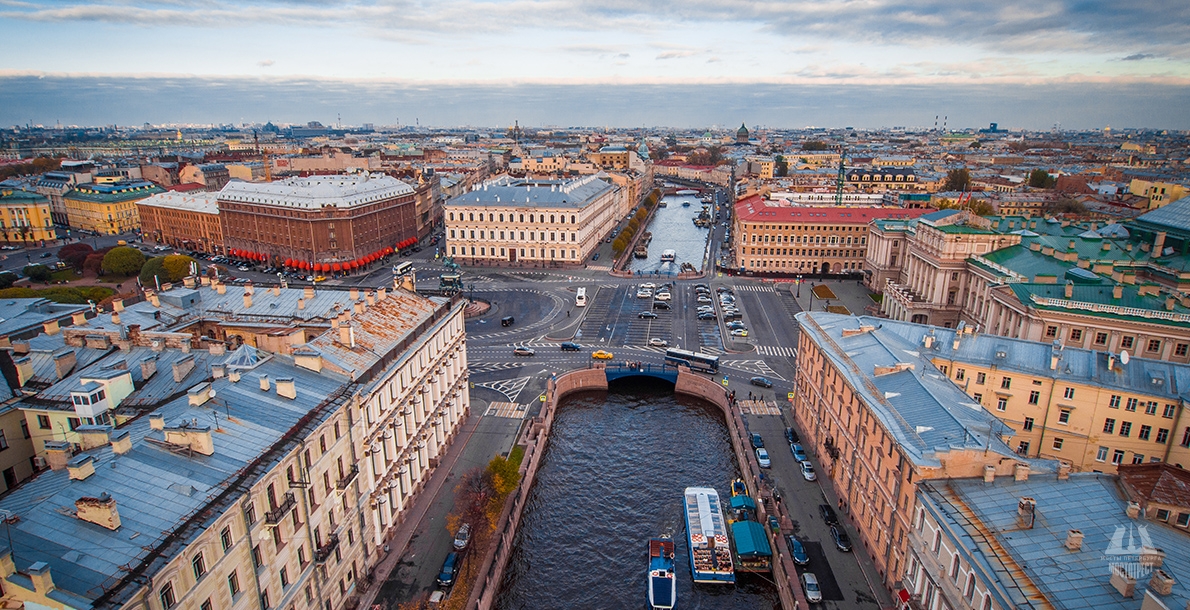 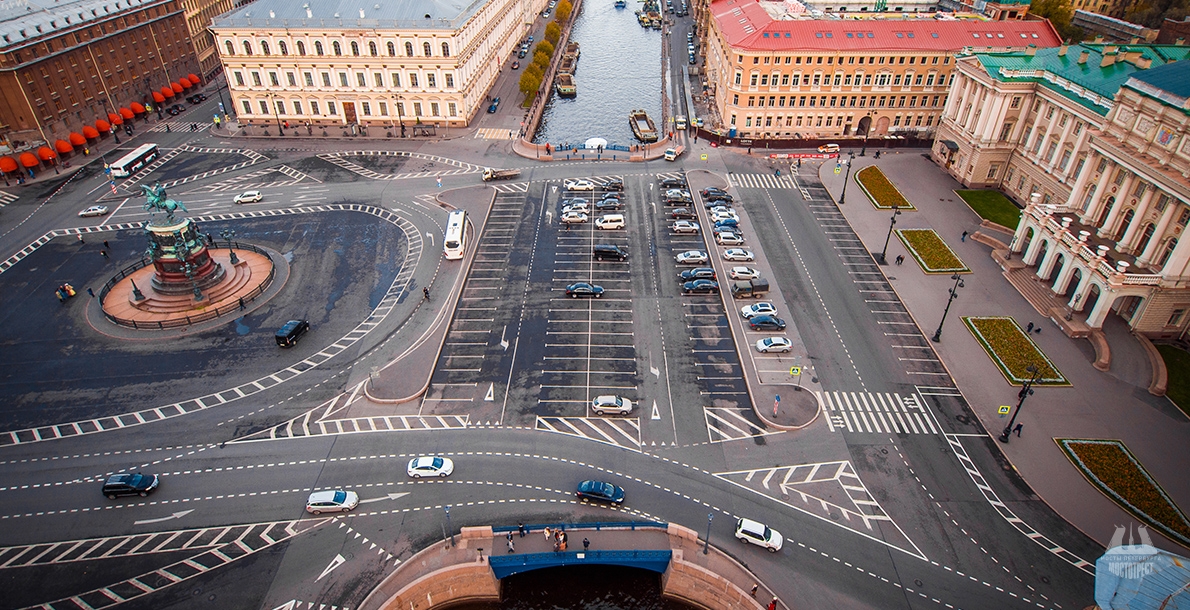 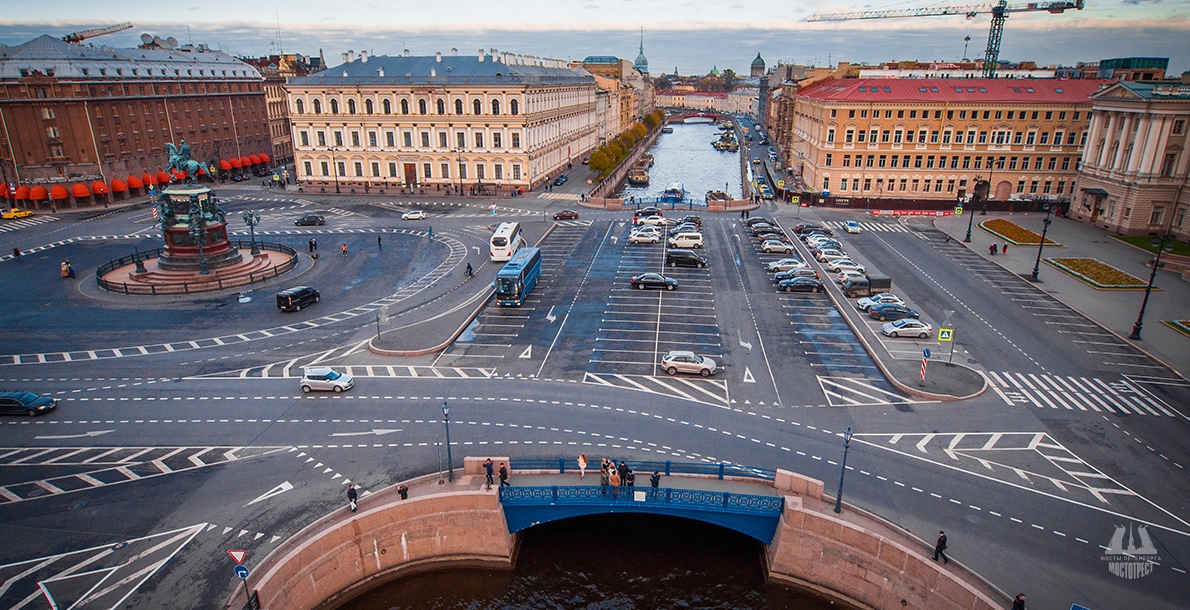 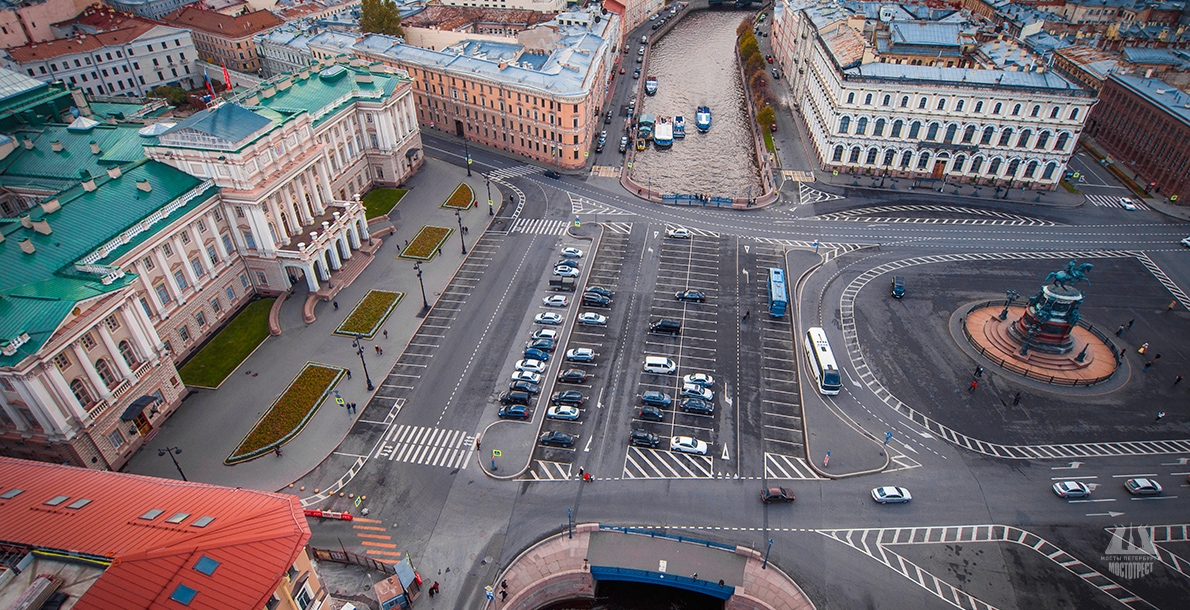 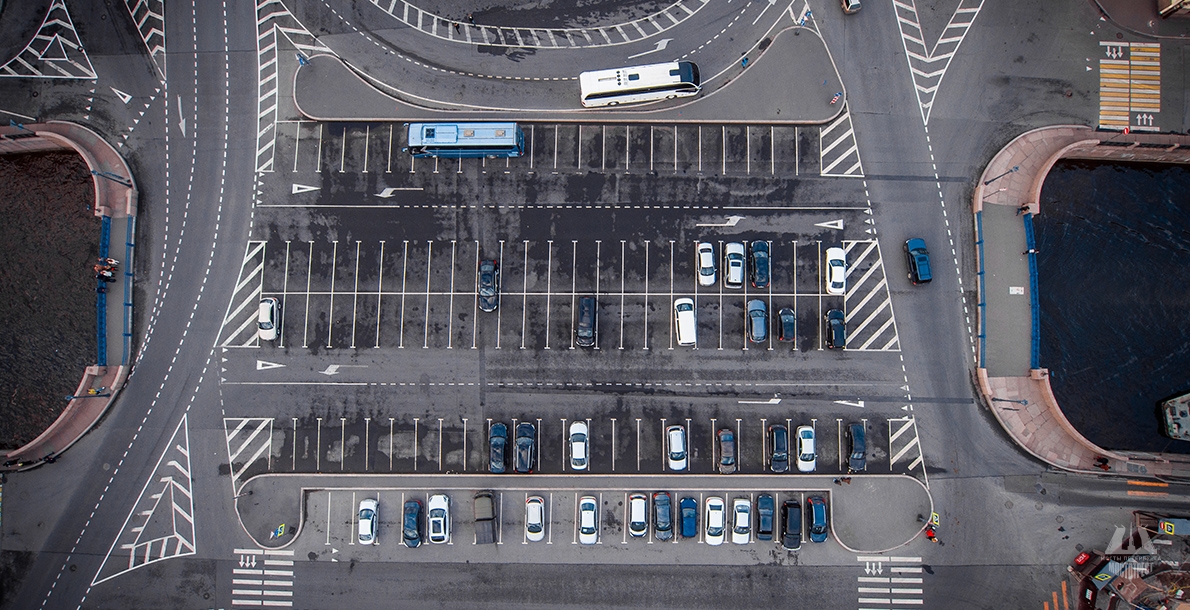 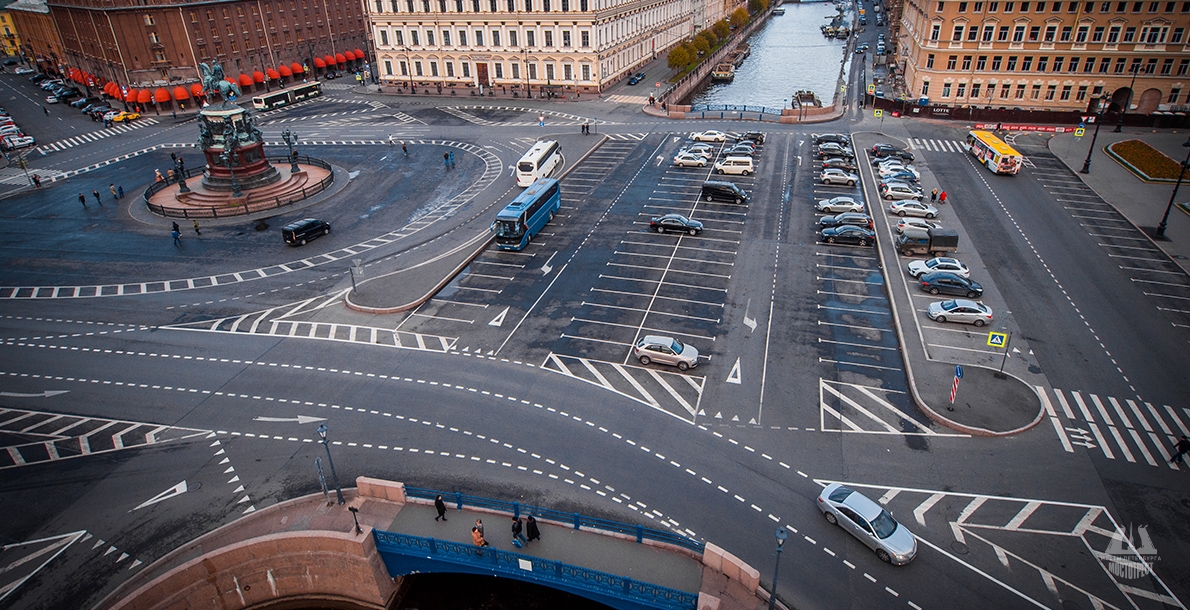 Blue Bridge is located in Admiralty District of St. Petersburg; it connects Kazansky Island and the 2-nd Admiralty Island across the Moyka River. It is the widest bridge in the city. It is a part of the ensemble of St. Isaac's Square.

Since 1730 there was a wooden draw bridge, which got its name by its colour. Later it was rebuilt into a three-span bridge with a wooden span structure on stone supports by the type of the bridge across the Kryukov Canal.

In 1818 under the project of W.I. Haste the bridge was rebuilt in a single span cast iron arched one. The superstructure is a double-hinged arch, designed as a continuous vault.

The sidewalk was separated from the roadway by cast iron railing of simple pattern with cast-iron bollards. On the superstructure facades there were a few ornaments. There were stone paving on the bridge. Originally, the bridge was narrow; it was 41 meters width.

In the years 1842-1843 in connection with the construction of the Mariinsky Palace and St. Isaac's Square redevelopment, the bridge was widened in the upstream in the direction of Red Bridge up to 97.3 meters. The superstructure was constructed of cast iron tubing connected to each other by bolts. Since 1925 the cracks appeared on iron boxes of the vault built in 1818 from the downstream side.

In the years 1929-1930 cast iron arches from the downstream side were replaced with reinforced concrete ones and the abutments of the old bridge were preserved. The superstructure is a double-hinged arch. The cast-iron part of the bridge, built in 1842, has survived to the present day.

In 1938 the stone paving on the bridge was replaced by asphalt pavement.

In the XIX-XX centuries the bridge was repeatedly reconstructed, its sizes and design features were changed. Despite this, its appearance has not changed, and the external appearance of the crossing is almost reached us in its original form. A statement that two of the emperor turned away from the bridge applies both to the bridge and to the Mariinsky Palace nearby: the equestrian statues (Bronze Horseman and the monument to Nicholas I) is directed from out the bridge.

Simple architectural decision of Blue Bridge organically inscribed in granite ensemble of the Moyka embankments. The Mariinsky Palace, St. Isaac's Square with the monument to Nicholas I, St. Isaac's Cathedral, the All-Russian Institute of Plant building n.a. N.I. Vavilov and his library are located near the bridge; and nearby - the House of Composers. Also you can see the building of the Admiralty from the bridge.

Initially, granite obelisks were used as the lamps according to the project of Haste. Lights that copying lights on the Bridge of Alexandre III in Paris, was installed in the late XIX century. These lights remained on the bridge in its original form. In 1971 a granite post-staff gauge decorated with the Trident of Neptune was installed on the descent of the bridge under the project of architect V.A. Petrov. On the construction the marks are applied indicating the water level during the largest floods: 1824, 1903, 1924, 1955, 1967.

From April 2013 to September 2014, major repairs of the bridge were carried out. Concrete arch was strengthened by an additional reinforcement; reinforced concrete soil arch was built above the cast iron part of the bridge; and the railing and iron metal decor were restored. Also crash barriers and stand lamps were restored; supports, granite cladding of abutments walls, and cast iron tubing were repaired. The river bottom is protected by reinforced concrete mats. There are safety islands on the bridge. It should be noted that the bridge is a popular place for parking of civil servants of the executive authorities of St. Petersburg and municipal employees of the Legislative Assembly, which is located in the Mariinsky Palace.

The area of the bridge decking at the moment is 2,294 square meters and sidewalks area - 143 sq.m. 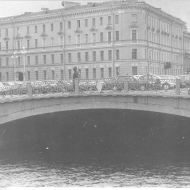 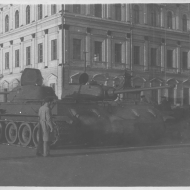 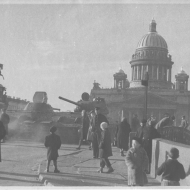 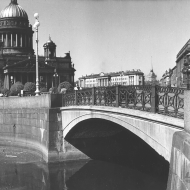 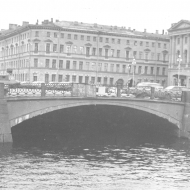 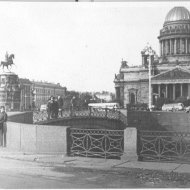 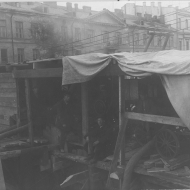