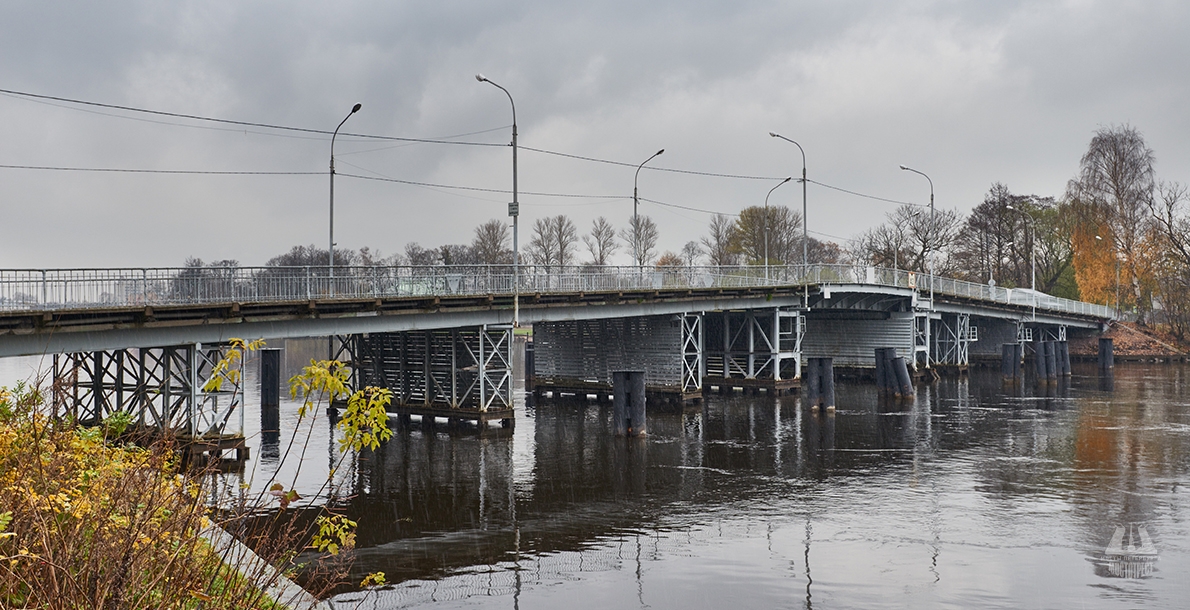 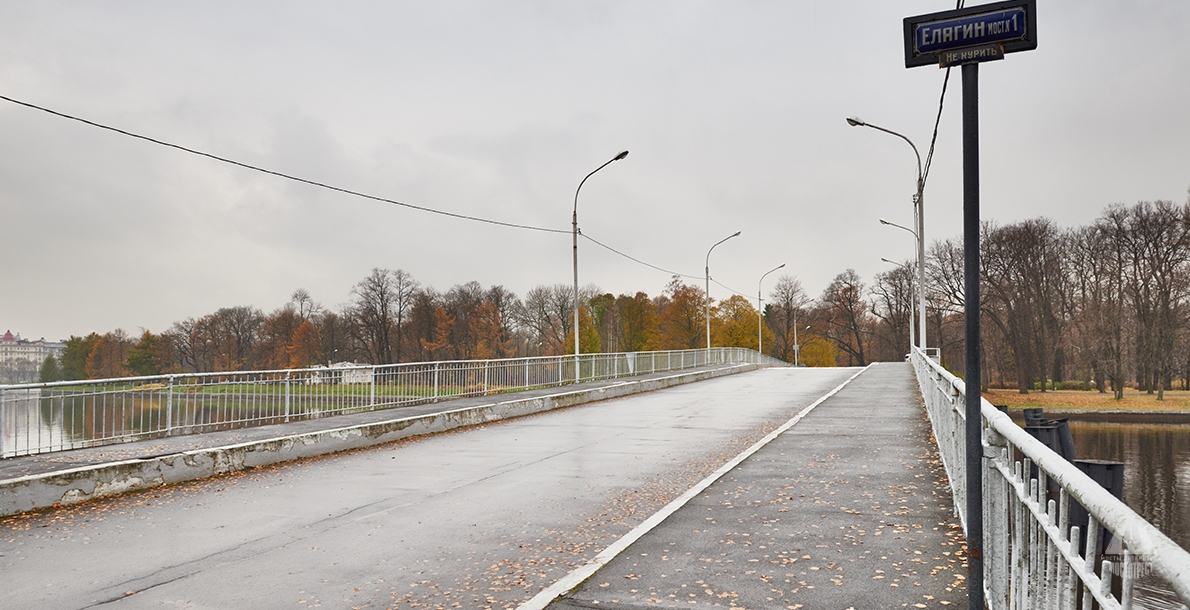 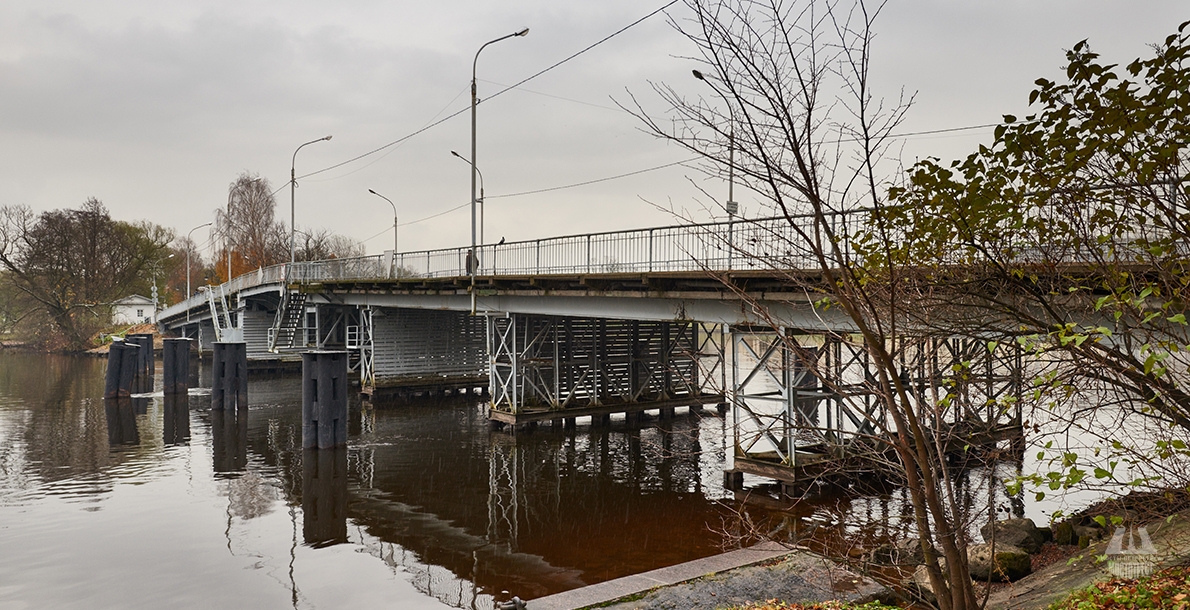 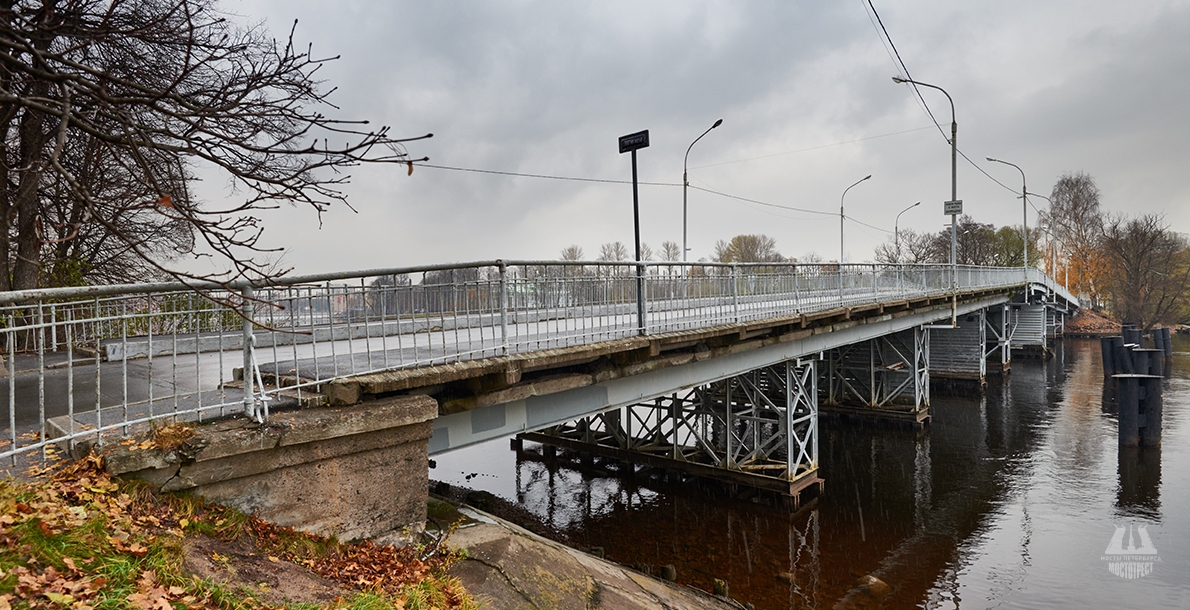 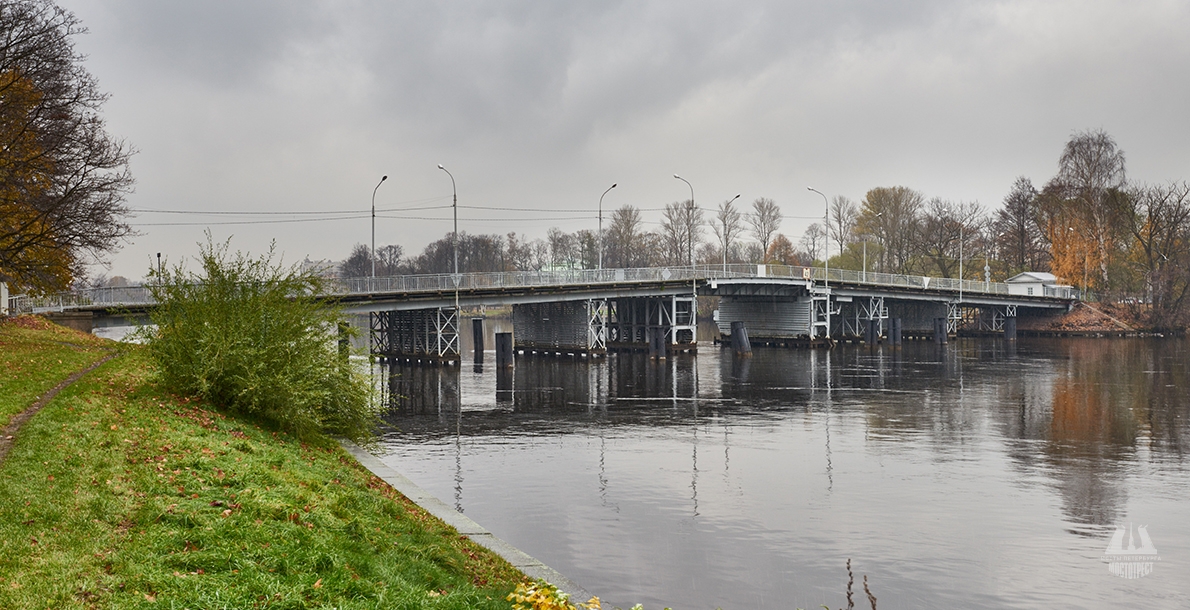 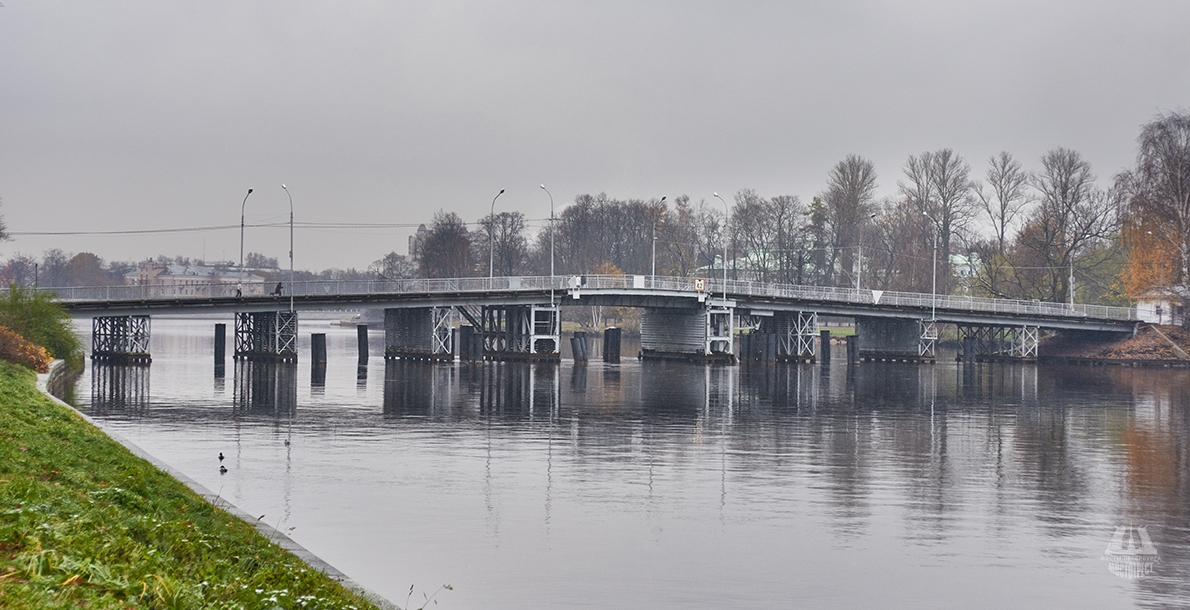 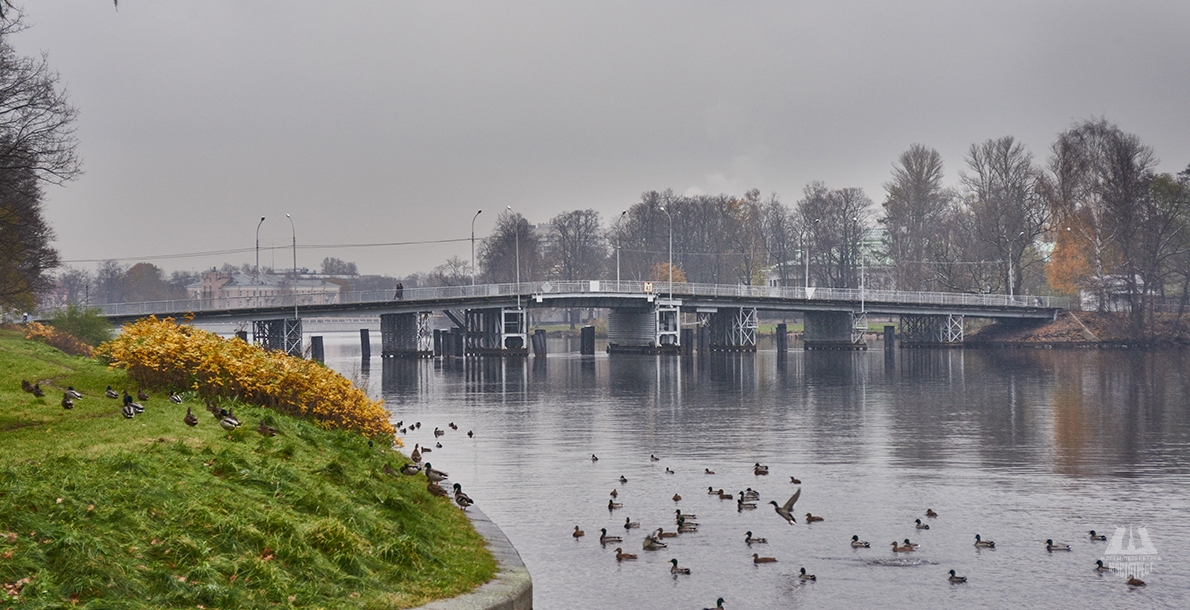 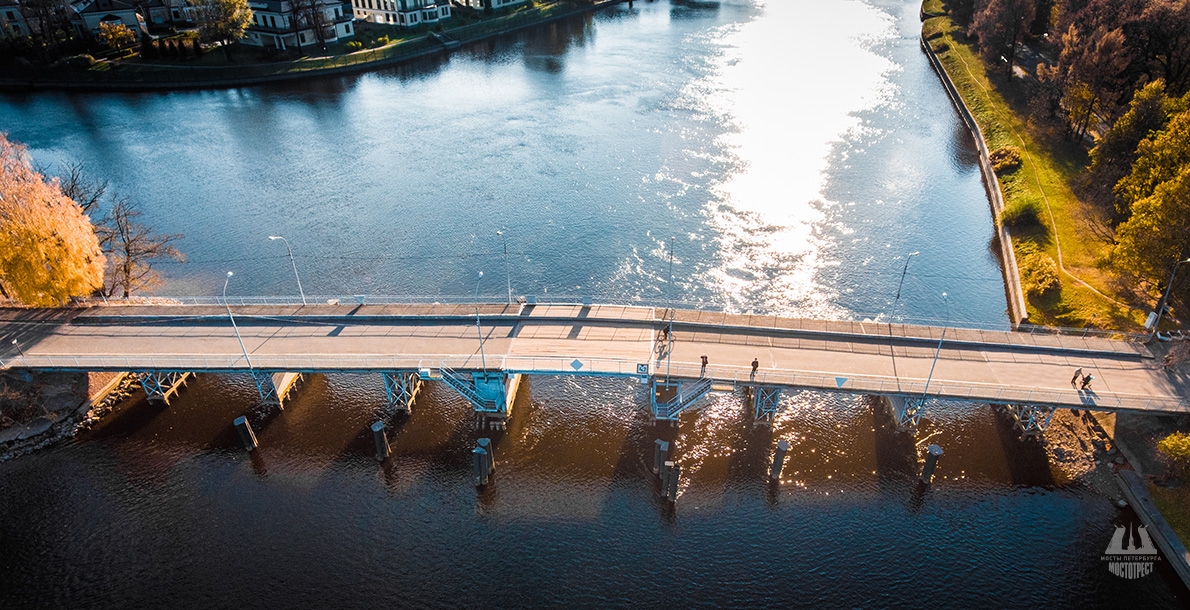 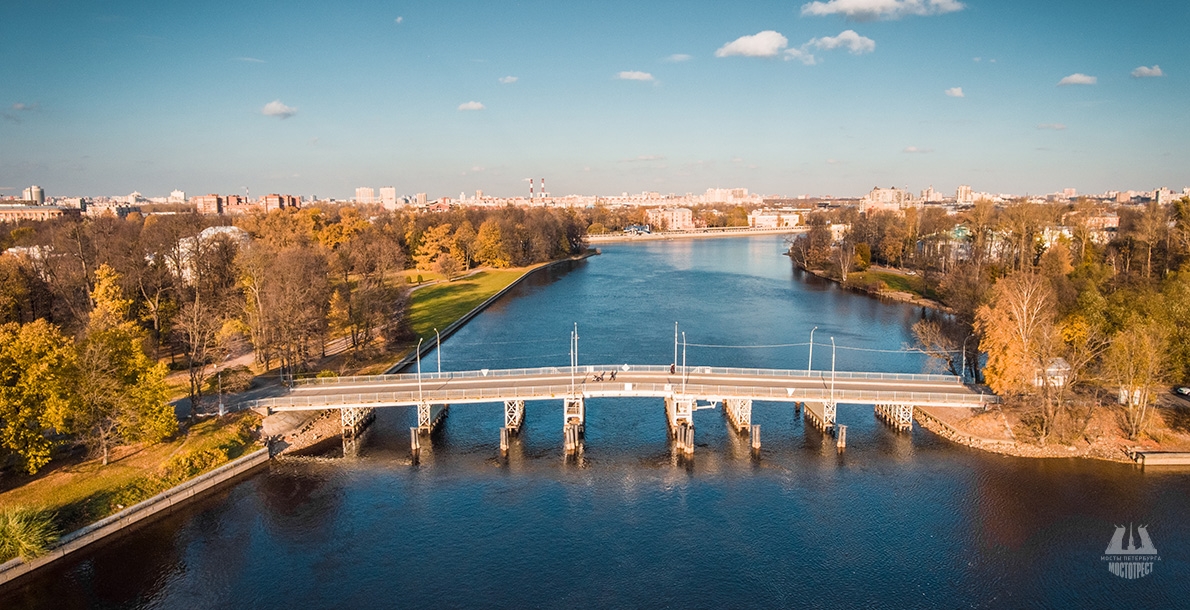 In the middle of the XVIII century the name Lisy Nos (Fox's Nose) stuck for the future Yelagin Island because it has an elongated shape from the western part. For some time the island was called by the names of its owners Shafirov, and later - Melgunov.

The 1st Yelagin Bridge is one of the first bridges built across the Srednyaya Nevka River. The floating bridge was opened at the beginning of 1817.

In 1831 the floating bridge was replaced by fixed strut-framed timber bridge with bolsters on pile supports consisting of 9 spans upon the project of engineer P.P. Bazen.

In 1908 the bridge was completely replaced by a timber bridge with the swing span in the middle. It was a twin-leaf bascule bridge, consisting of 4 timber frames. The bridge was opened with use of manual winches. The bridge abutments consisted of timber piles and pile retaining wall. There were tower intermediate supports on pile foundation. It was a timber covered bridge.

In 1931 the overhaul of the bridge was carried out while maintaining the same structure and foundation piles.

During the years 1951-1952 the bridge was rebuilt according to the project of engineer V.V. Blazhevich of Lengiproinzhproject to nine span metal simple bridge with single leaf draw span in the middle. Fixed spans were overlapped by welded metal I-beams tied in pairs.

The bridge has single-leaf draw bascule span with metal welded superstructure with a fixed axis of rotation. It consists of 2 metal welded beams located under sidewalks and interconnected with beam grid.

The bridge abutments are massive and concrete, and based on earth foundation. Cones are reinforced with concrete slabs. The intermediate supports on the timber pile foundation with rigid metal grillage and metal frame rigging. Supports are protected from ice and berthing impact by pile groups.

In 1975-1976 the bridge was repaired under the project of Lenmosttrest. Timber slab on the roadway and sidewalks of fixed spans was replaced by concrete slabs, included in main beams. The timber deck on the draw span was repaired. The bridge was painted. The supports sheeting and cones paving were renewed. The pile groups were repaired.

In 1981, machinery and technical equipment on the draw span of the bridge were repaired.

In 1998, Mostotrest made painting of the bridge spans, metal supports, and replaced timber deck on the draw span. In 1999, by efforts of Podvodrechstroy, CJSC metal protective pile groups of the bridge supports were installed.