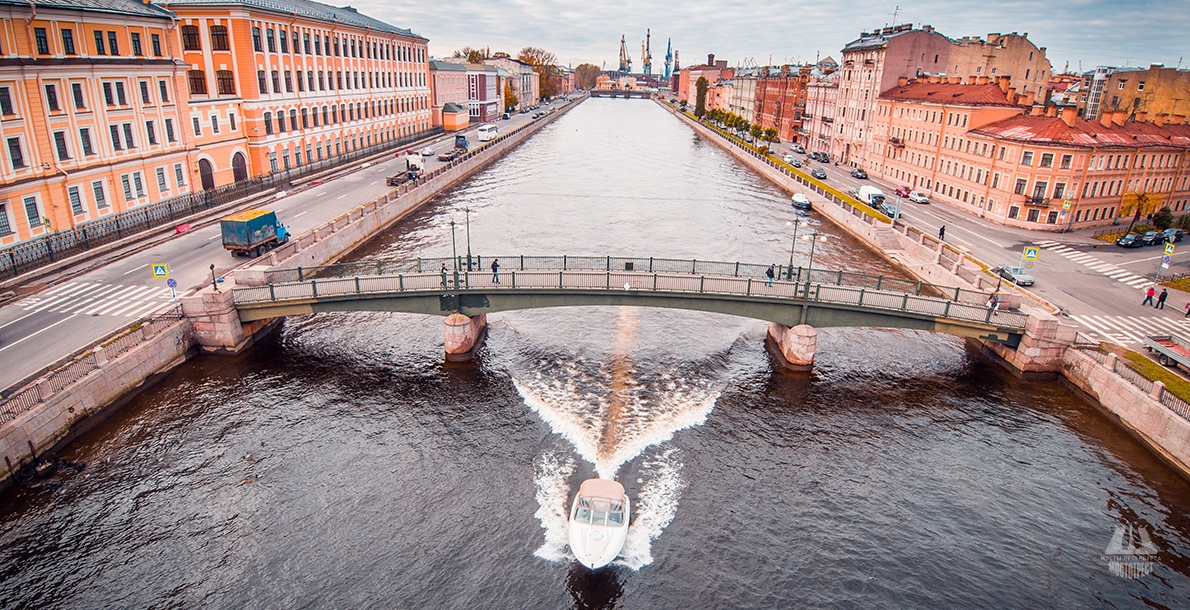 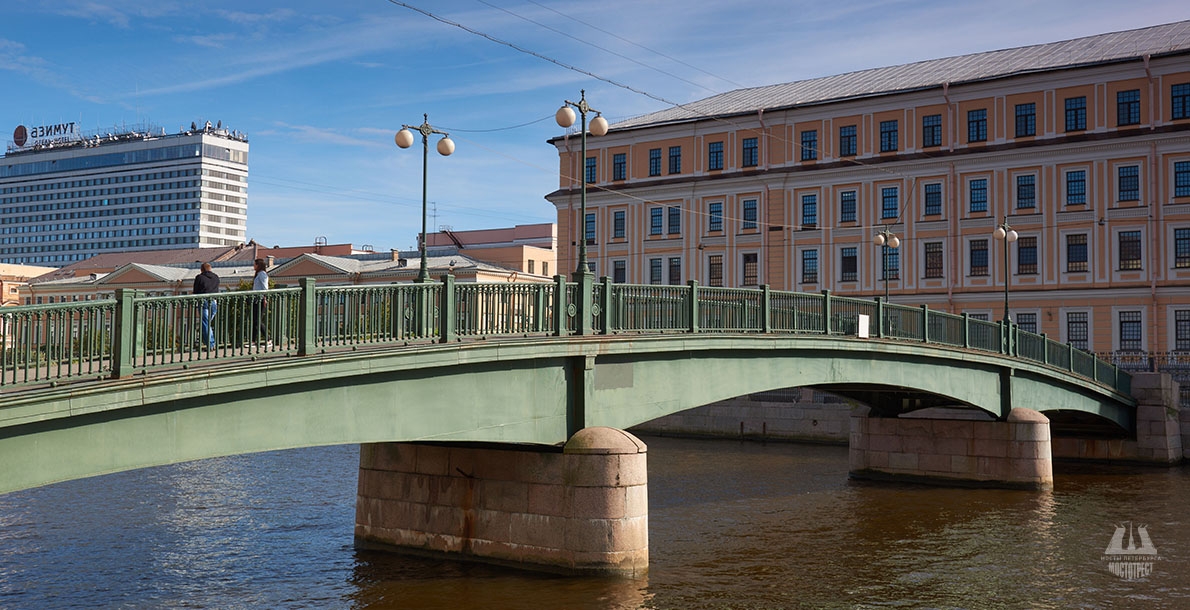 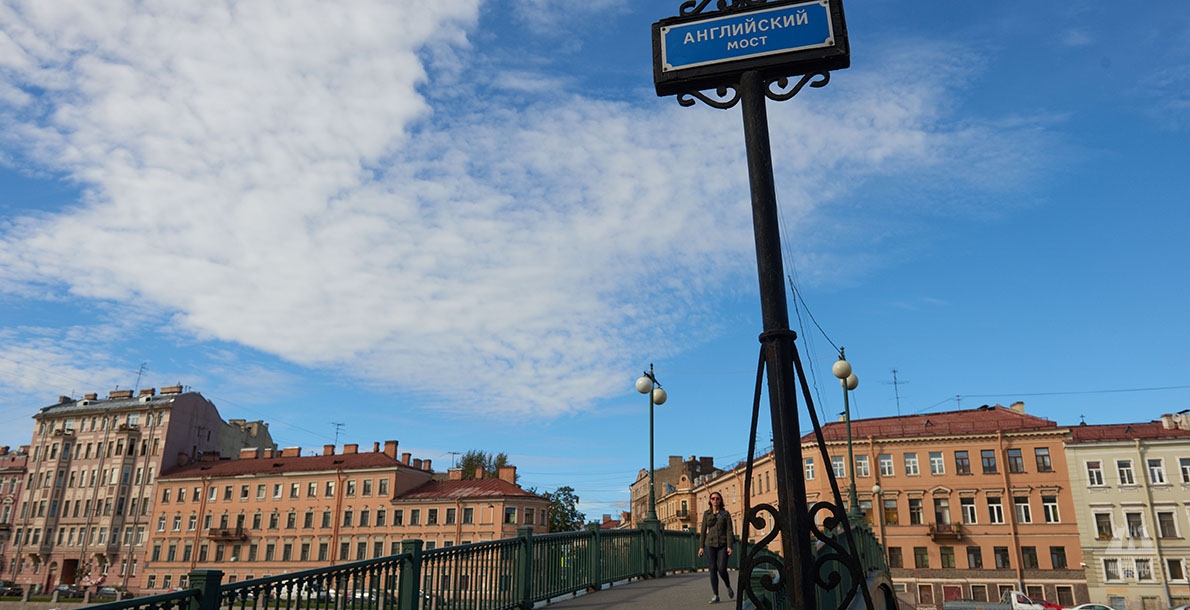 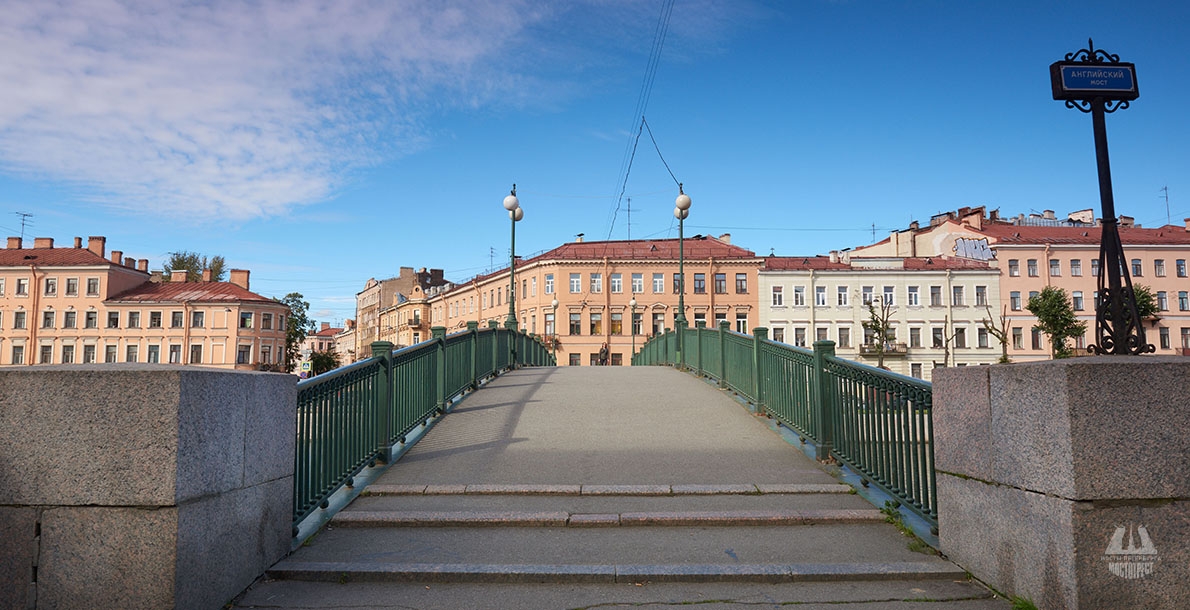 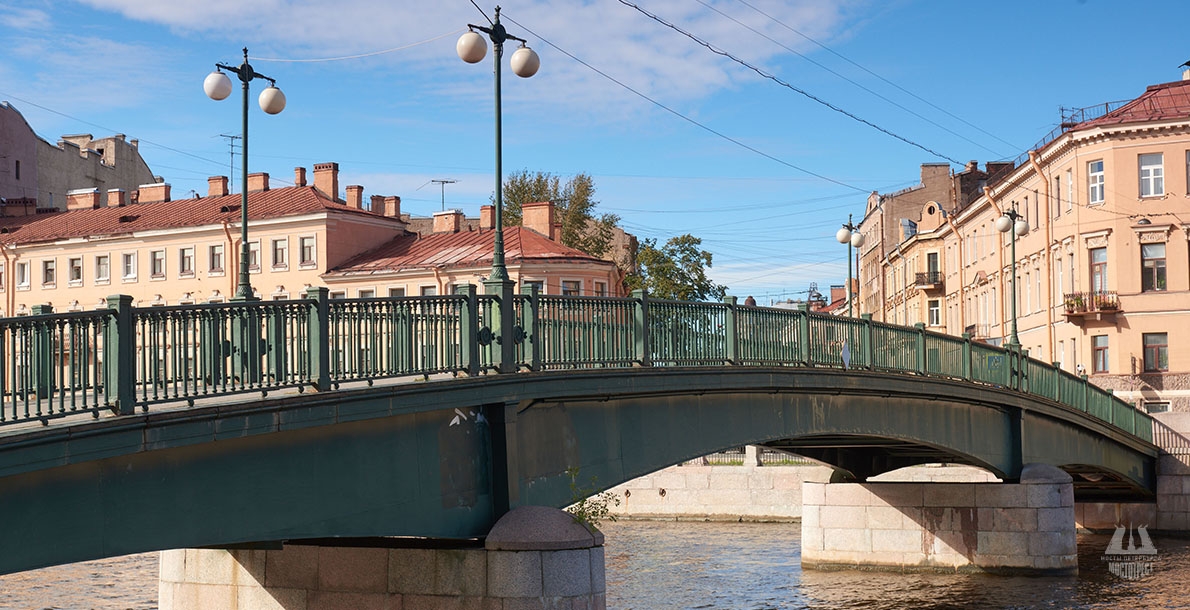 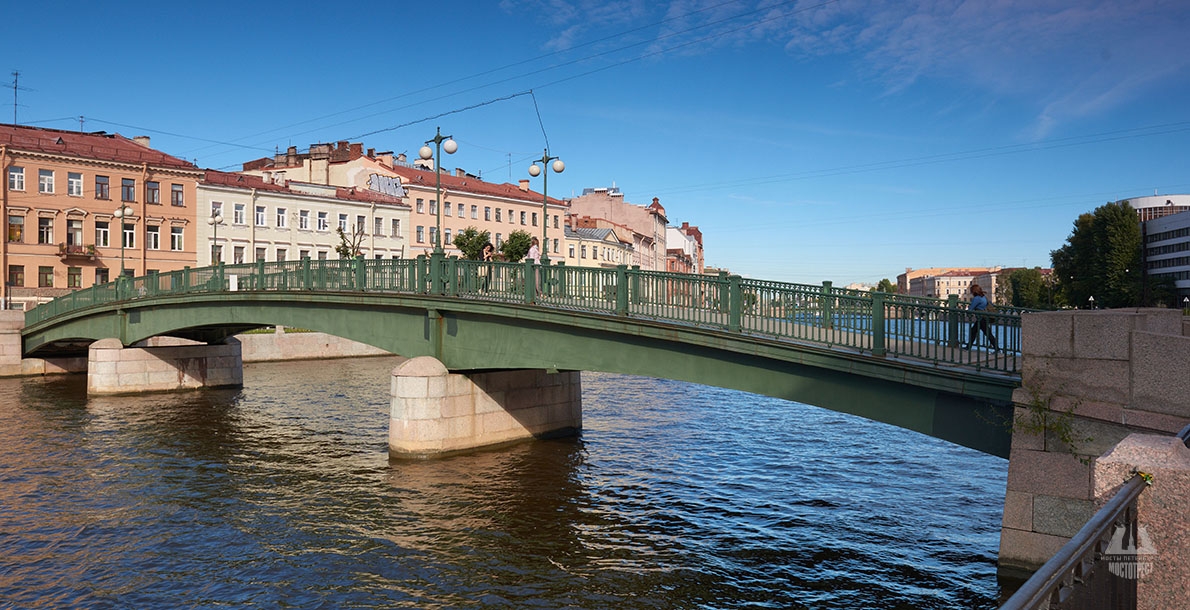 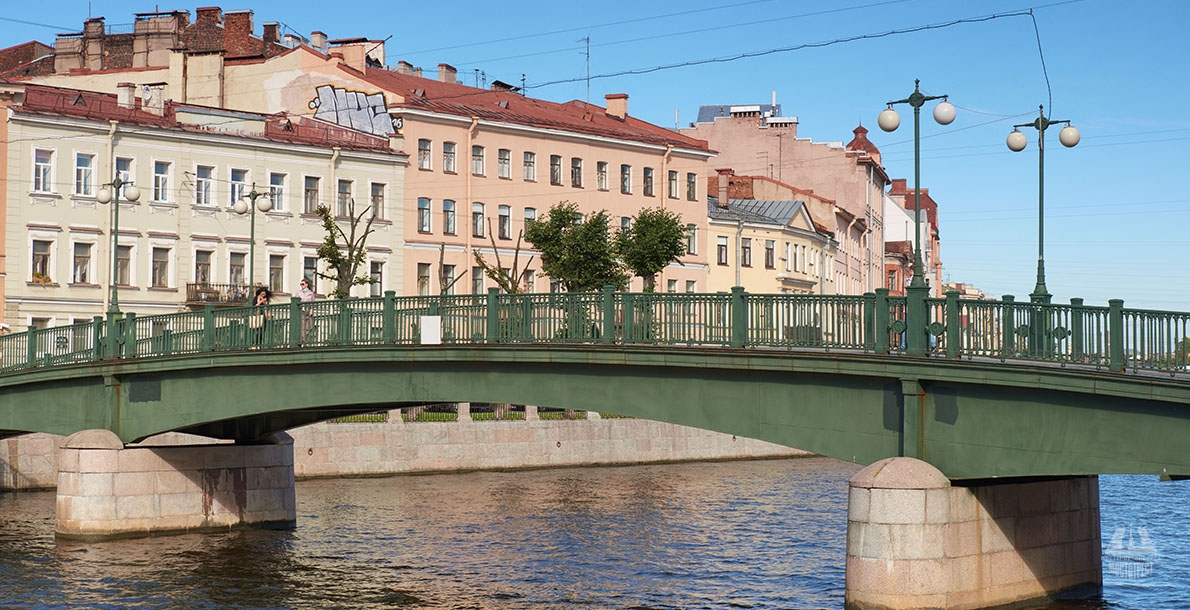 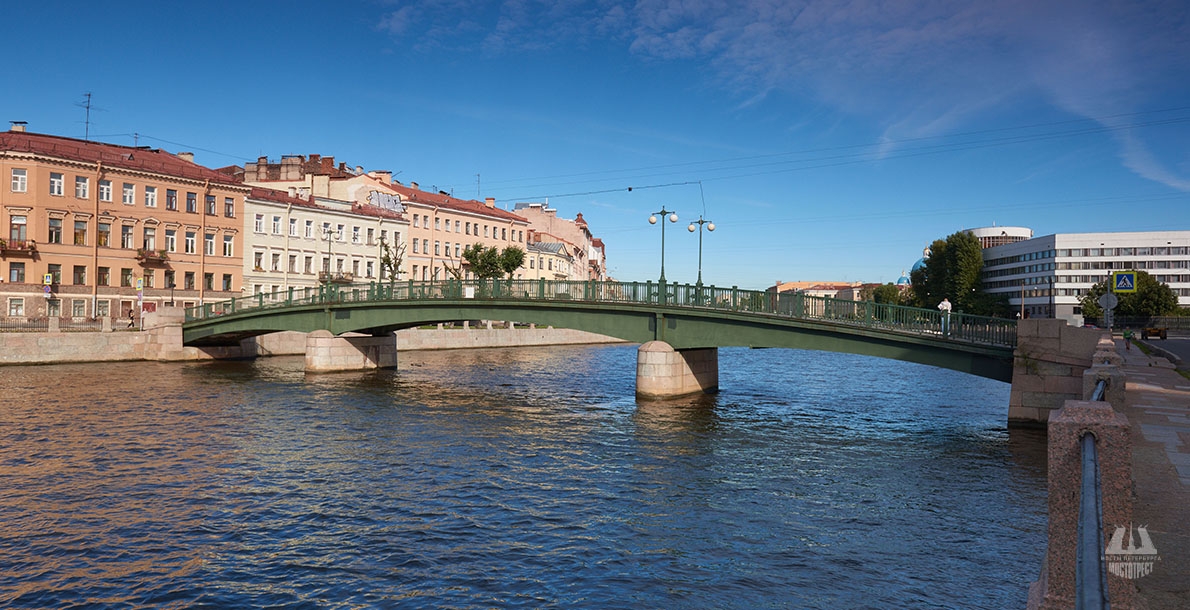 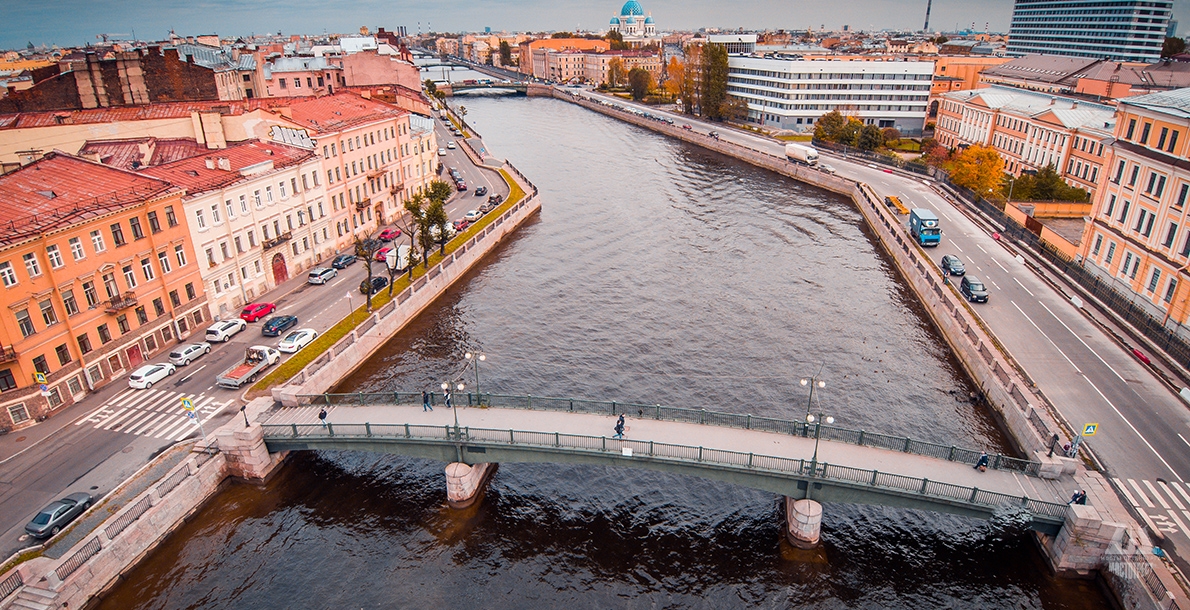 English bridge connects Pokrovsky Island and Bezymyanny Island over the Fontanka River in the Admiralty district of St. Petersburg. The bridge connects the medical treatment buildings of the District Medical Centre with residential areas of the Sadovaya Street and the Turgenev Square.

In 1910, five-span pedestrian span metal simple bridge was built there. The length of the bridge was 61 meters, width - 4.5 meters. He took over the part of the traffic load that arose after the collapse of Egyptian bridge in 1905.

The bridge derived its name from the nearby highway - Angliysky Prospect, which, in turn, is called in honour of the Angliyskaya Naberezhnaya (English Embarkment), which received its name at the beginning of the XIX century. In the XVIII century this area was colonized by merchants from the country of Foggy Albion, and the Anglican Church of Jesus Christ was opened here. Merchants took the whole quarter; the embankment was the "soul" of aristocratic St. Petersburg: balls, literary and musical evenings were held here, social life was in full swing. The prospect was built in the nineteenth century; it was inhabited by theatre bohemian of the Northern Capital.

The crossing was repaired several times. Modern bridge was built because of the need to lay there district heating pipes. In 1963, under the project of engineer A.A. Kulikov of Lengiproinzhproject and architect P.A. Arishev by order of Fuel and Energy Administration for district heating network old timber bridge was rebuilt in three-span metal bridge with continuous beams.

The bridge span has a curved shape of the bottom chords. The bridge is designed for the laying of district heating pipes and pedestrians passing. The bridge abutments and supports are reinforced concrete on the pile foundation, faced with granite. Railing consists of cast-iron grates and bollards. Above the river supports metal lighting columns with lamps are installed. The bridge was built by the type of Krasnoarmeysky pedestrian bridge across the Fontanka River.

English bridge is distinguished by its proportions, forming a unique ensemble together with Egyptian Bridge and Krasnoarmeysky Bridge united by a single architectural style. From each side of the start and end of the bridge there are stair descents. Artists of St. Petersburg have traditionally paid special attention to this bridge, so it can be seen in many paintings.

There is quite a few "English" places in St. Petersburg. The first ship with Englishmen on board - the engineers and sailors, doctors and mathematicians - arrived here together with Peter the Great. There is a legend that in the XIX century, a rich old Englishman visited the city on the Neva River. From the sailboat board he appreciated the beauty of the Northern Capital and refused going ashore saying that it made no sense, since there wouldn’t see anything better and more beautiful. 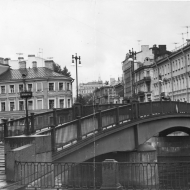 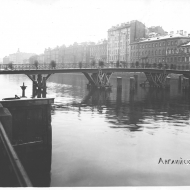 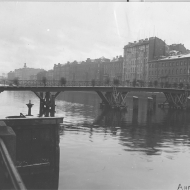