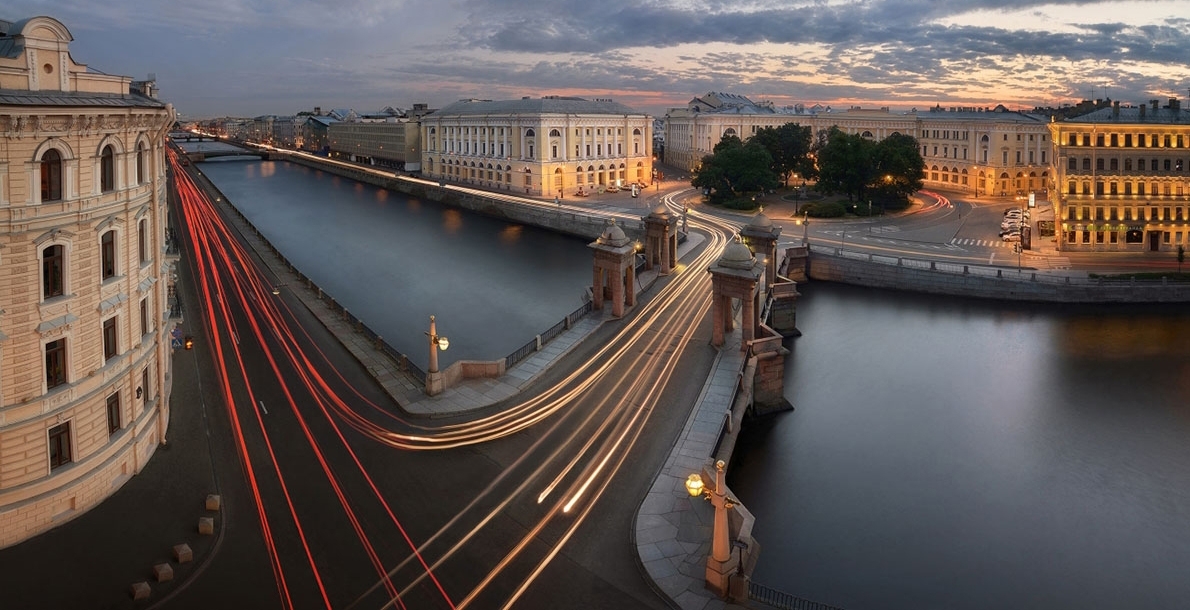 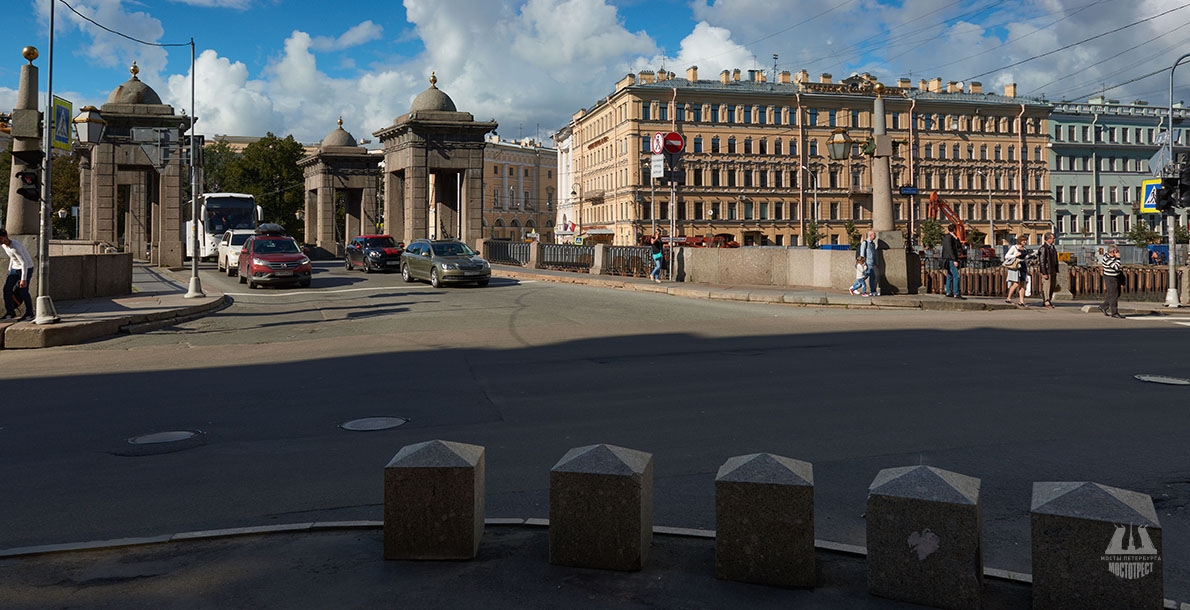 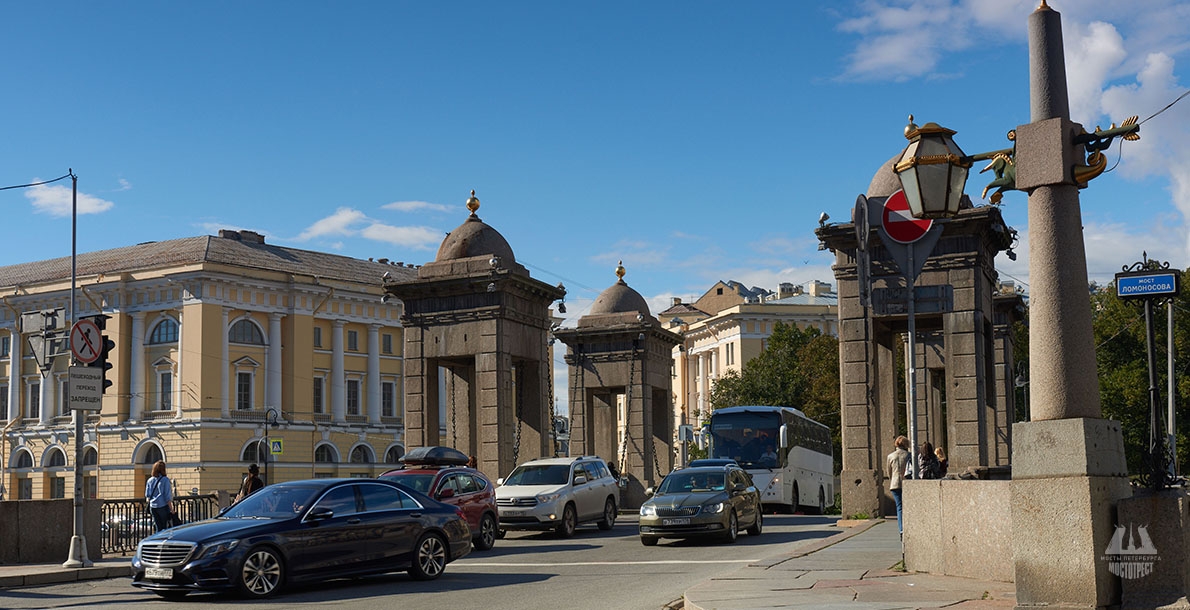 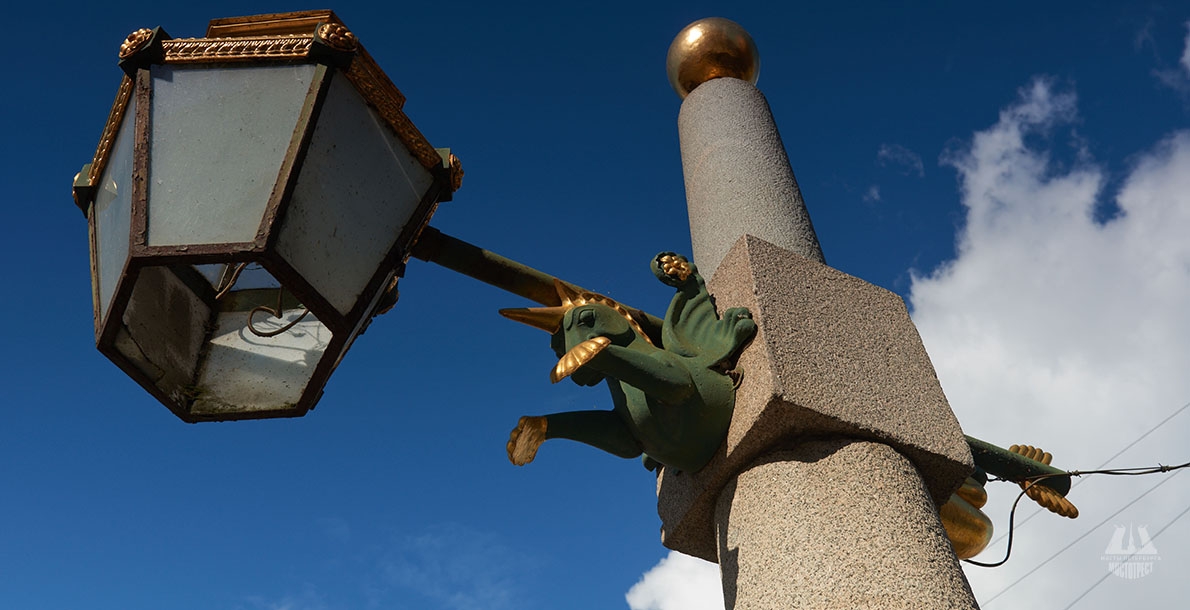 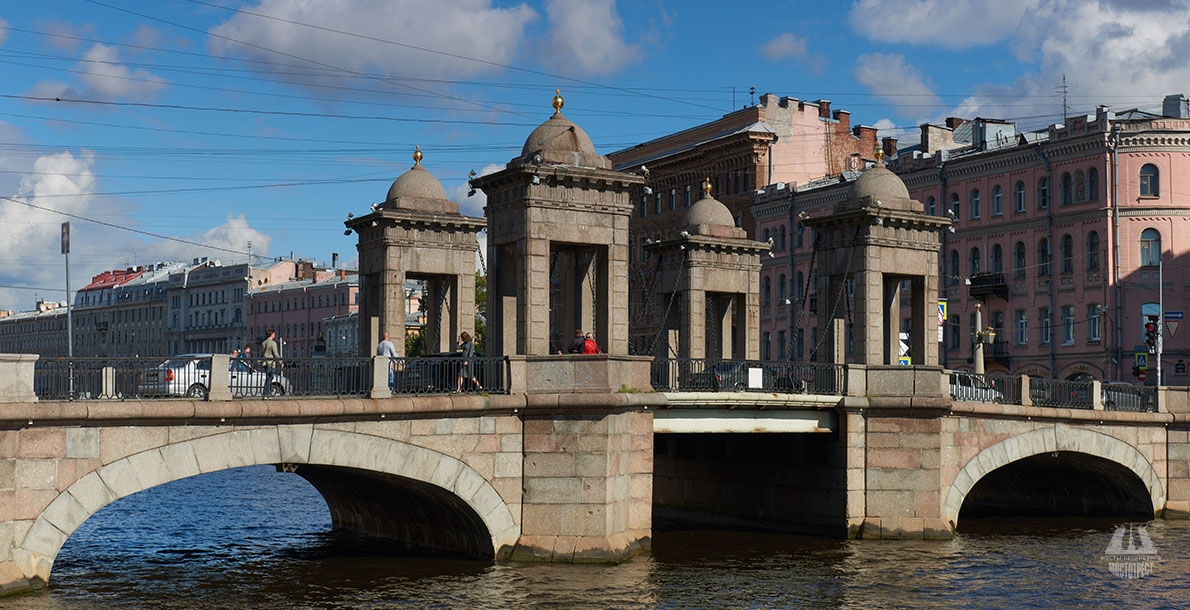 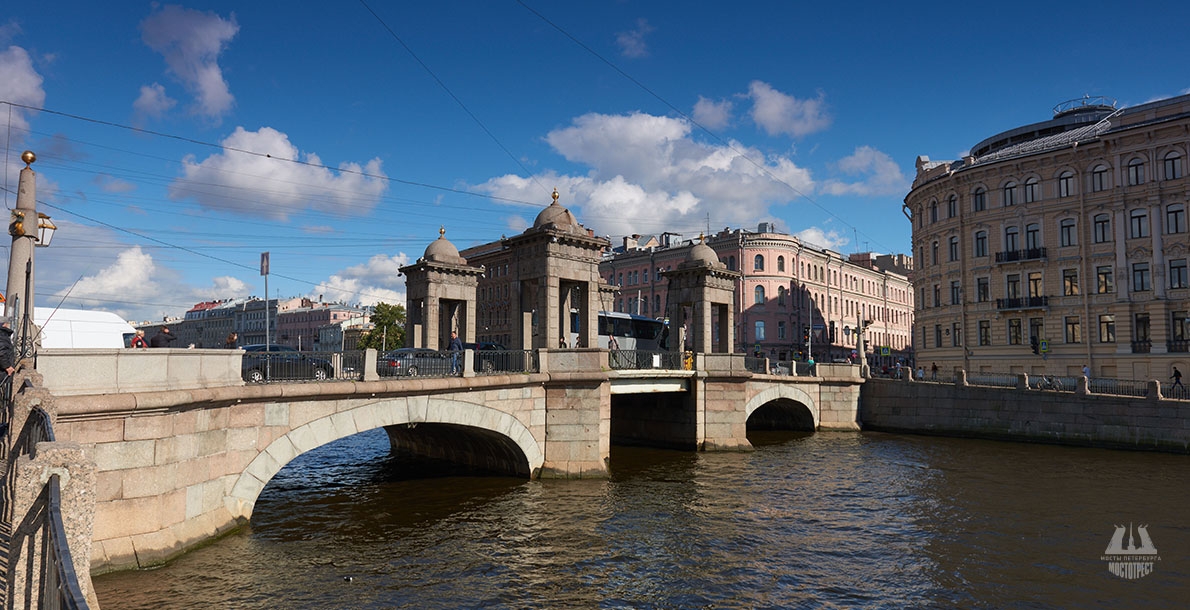 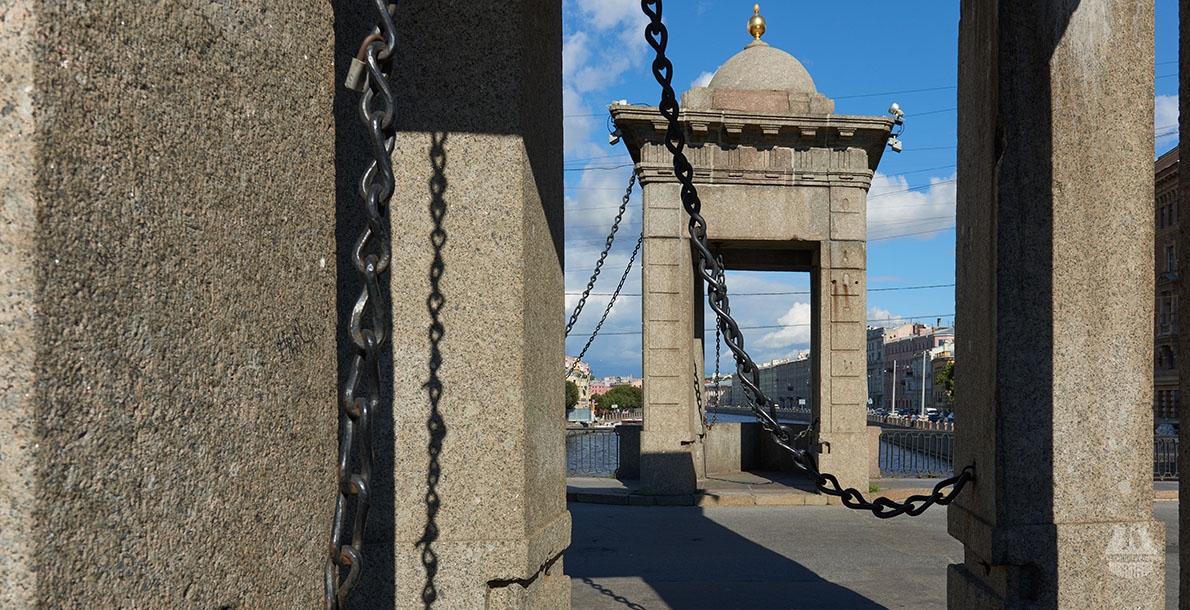 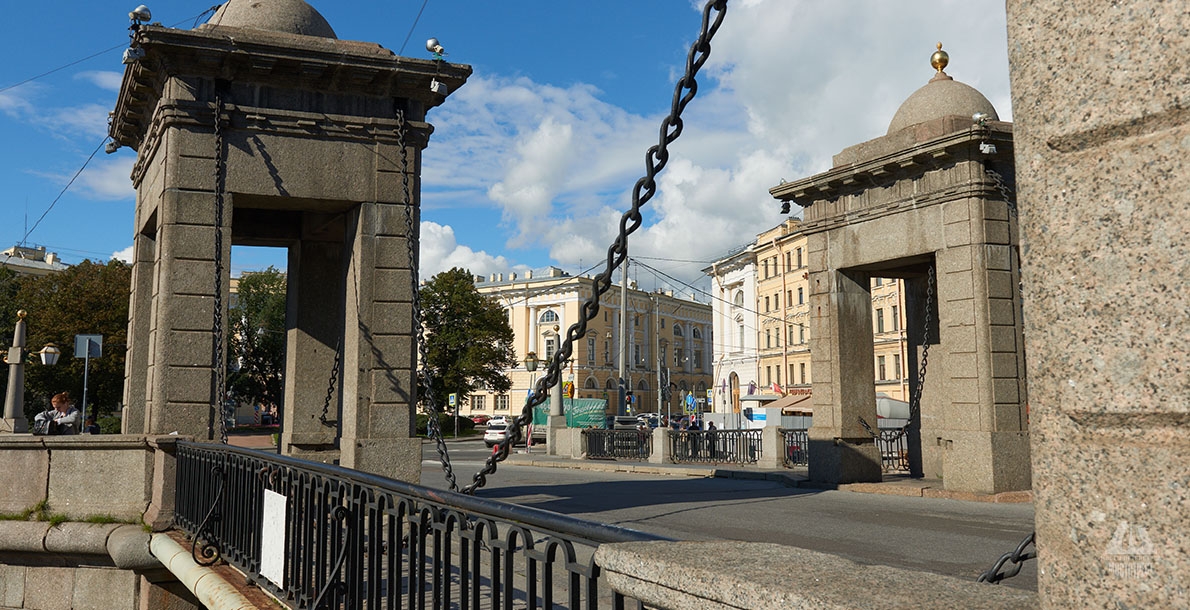 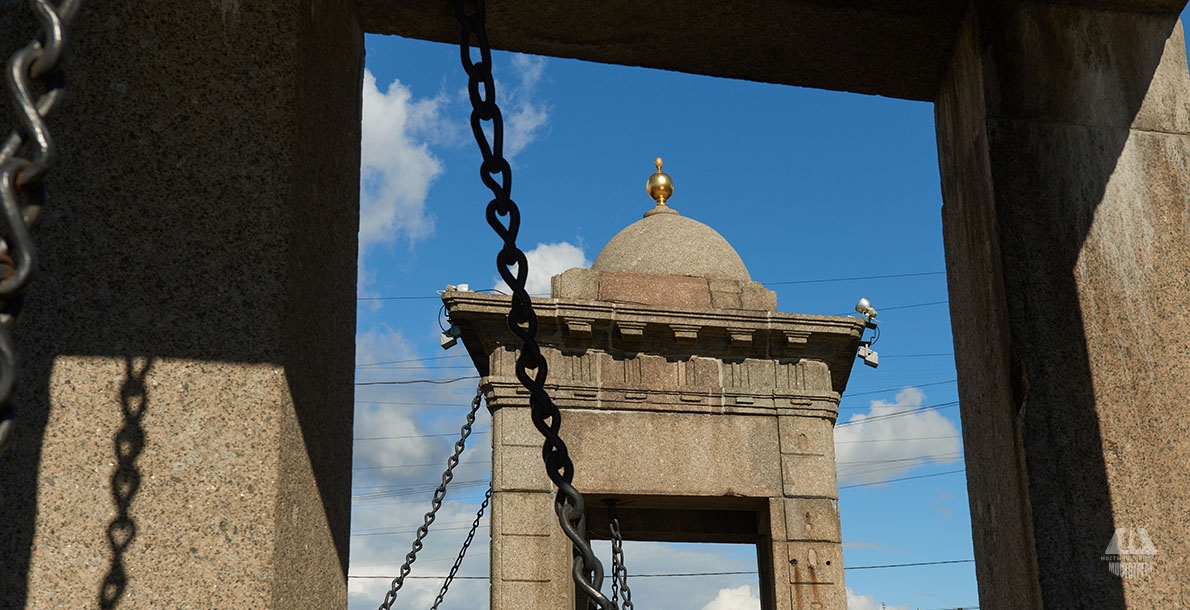 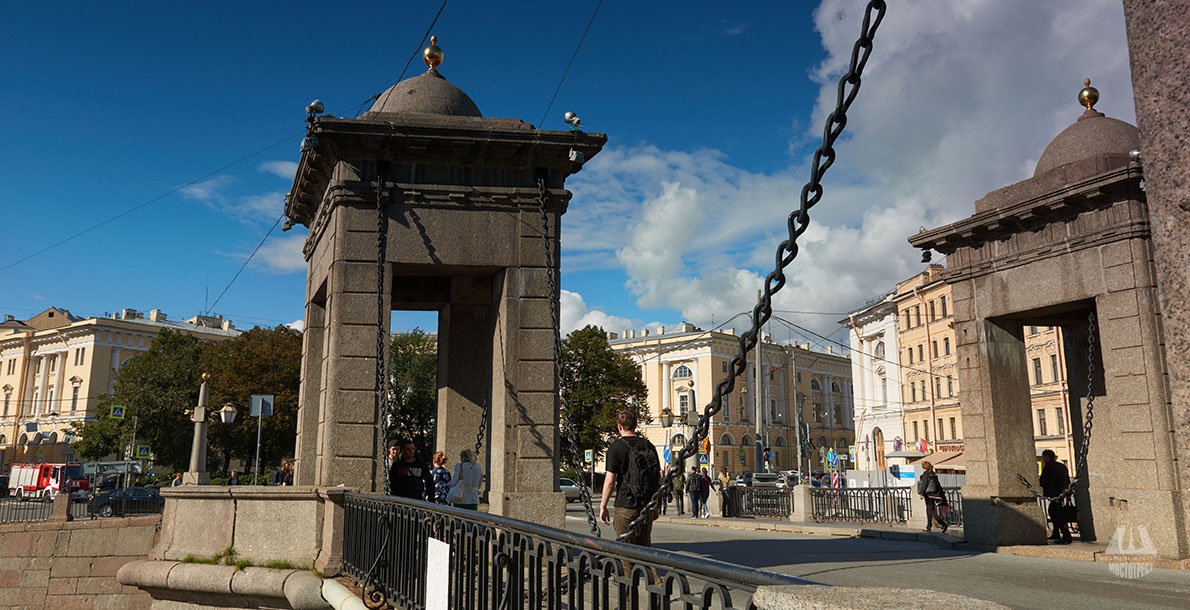 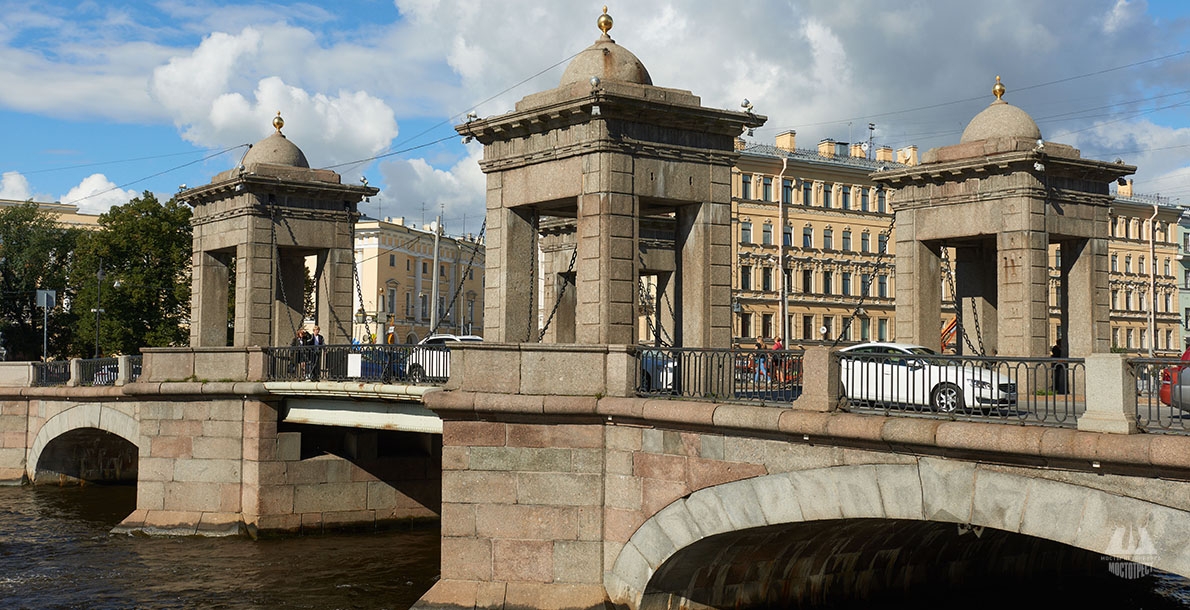 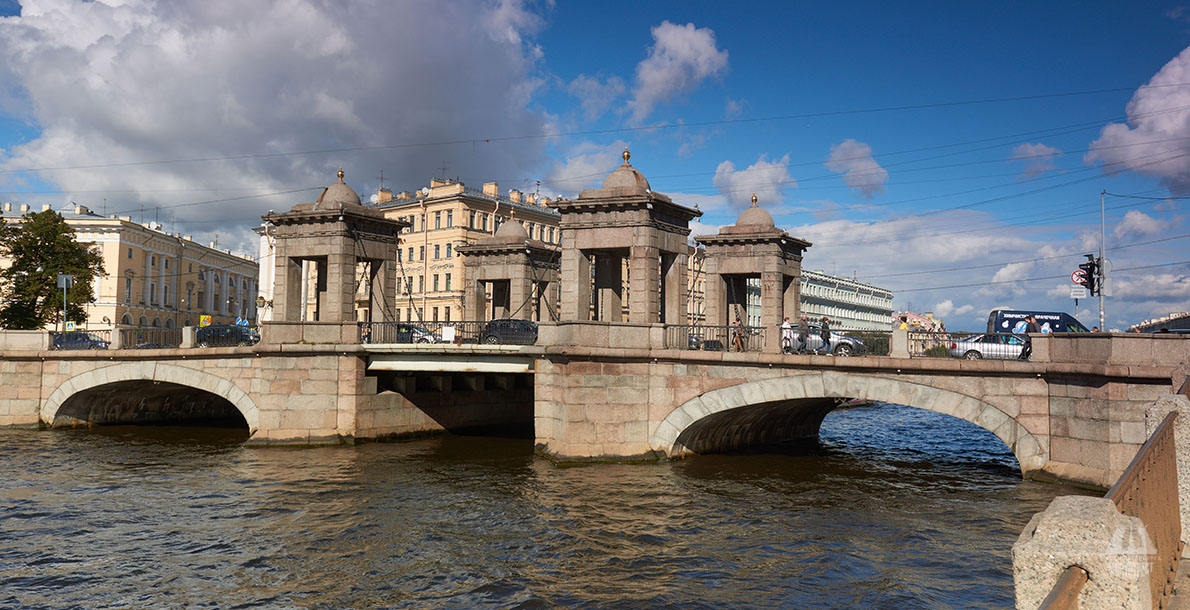 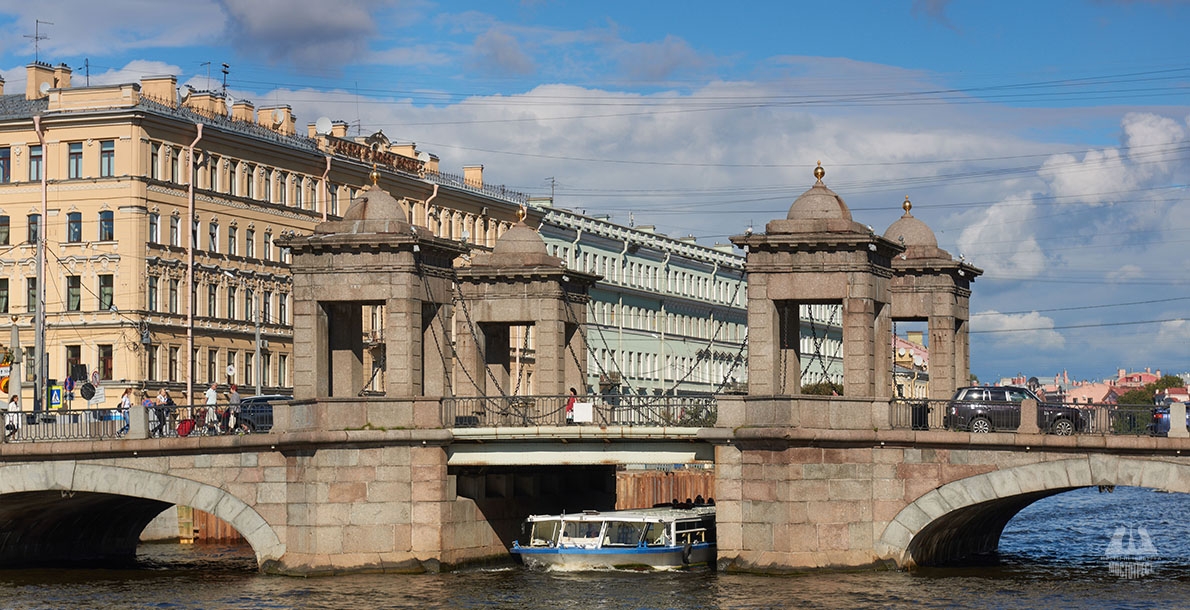 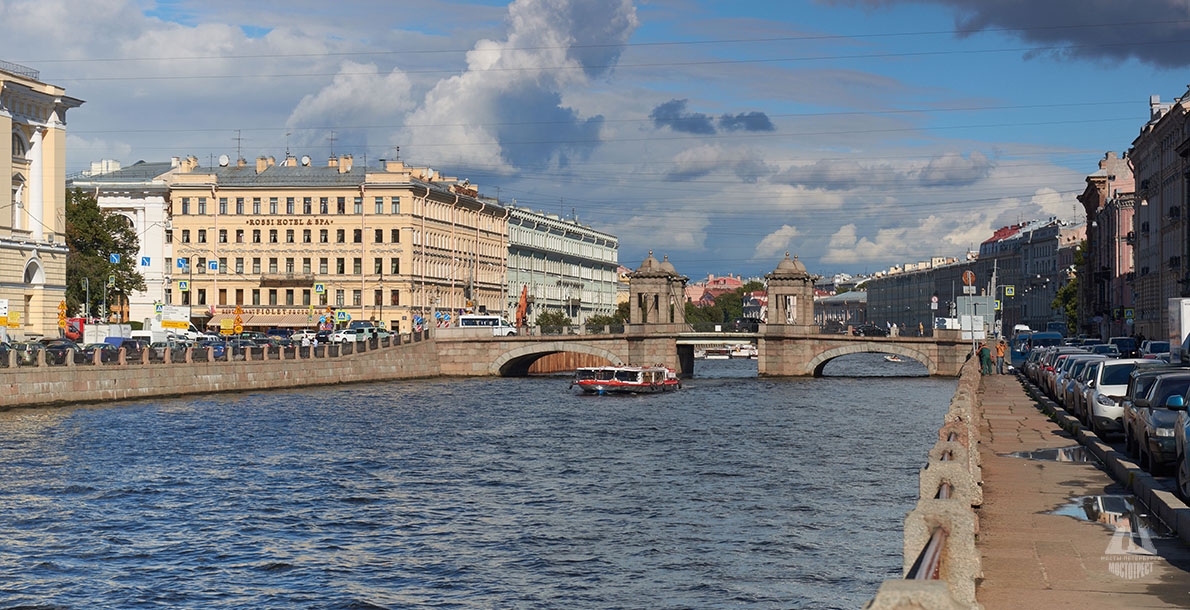 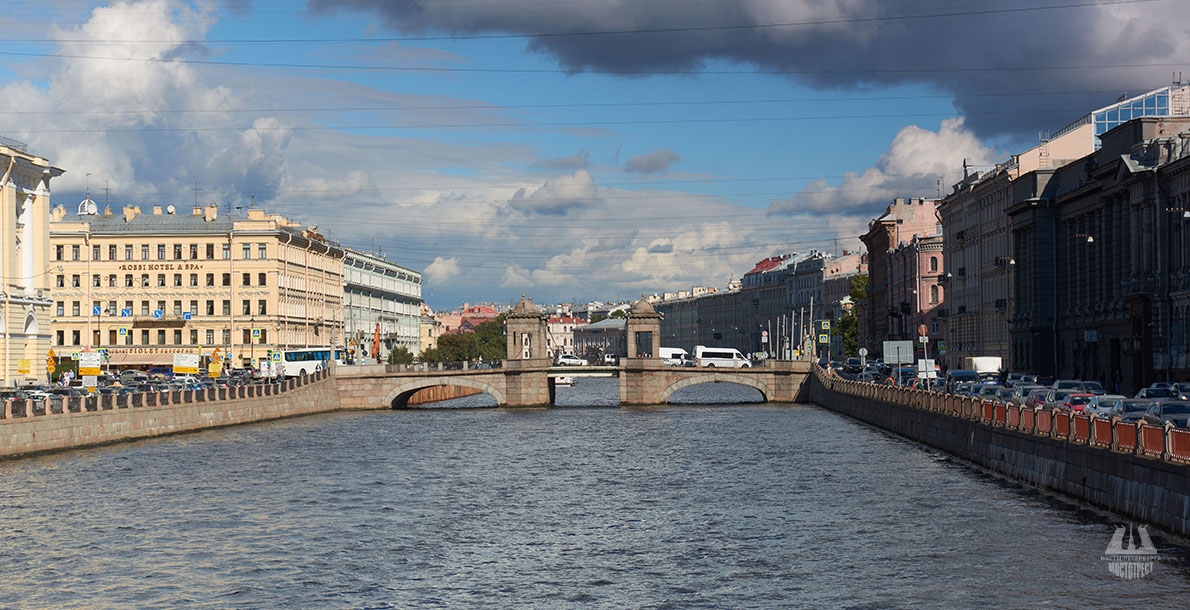 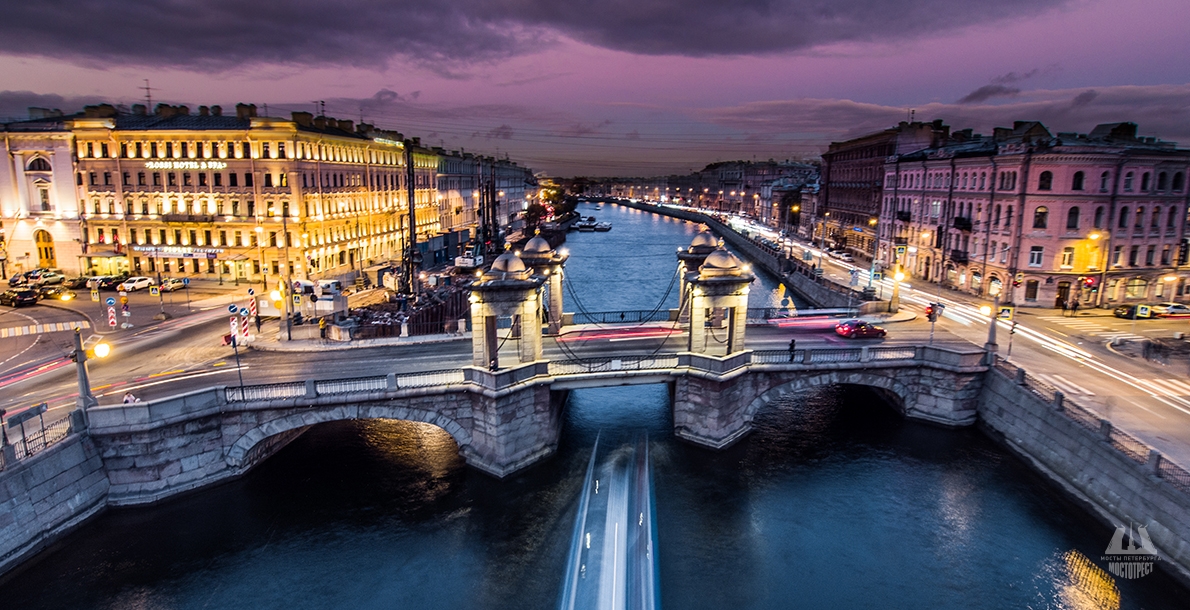 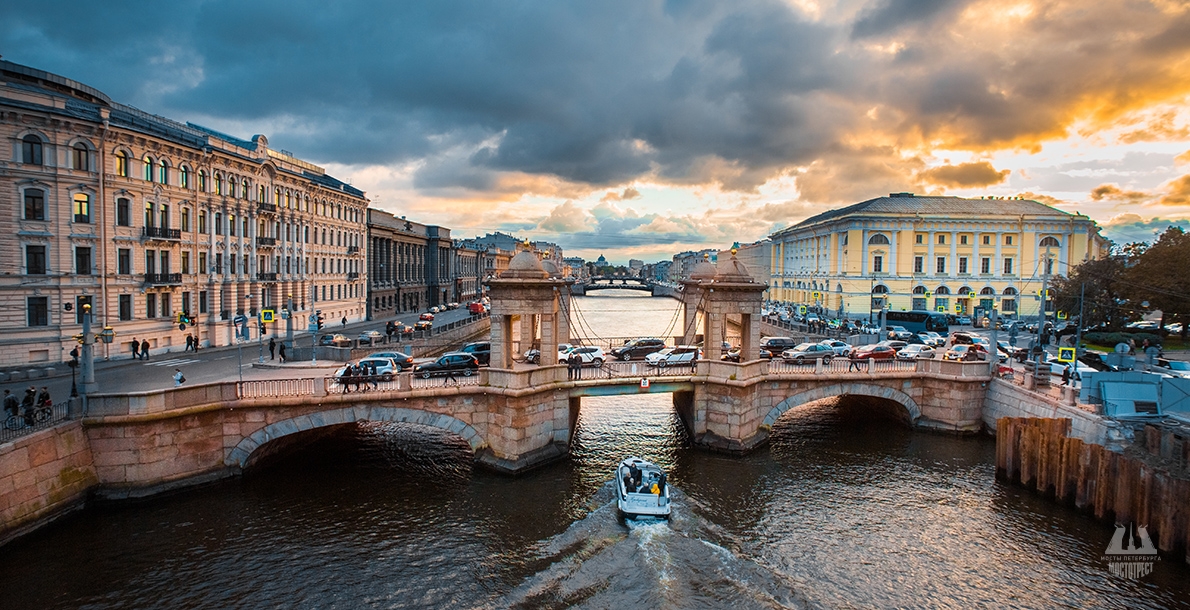 Lomonosov Bridge is a bridge across the Fontanka River in Saint Petersburg, at the crossing of the river with Lomonosov street. It is one of the outstanding monuments of bridge construction culture of the city.

Chernyshev Bridge was not scheduled in the preparation of the project for the Fontanka River embankments arrangement and its construction was started later than the other ones, when the embankment was already encased in granite. It was built in 1785-1787 under the typical project of stone bridges over the Fontanka River.

The bridge was built, apparently, on the request of Catherine II, and originally named Catherine’s Bridge, and then was renamed in honour of Chernyshev, General-in-Chief of the graph G.P. Chernyshev, a member of the Azov campaign and the Battle of Narva and Poltava, and after the revolution, the bridge was named after the great Russian scientist M.V. Lomonosov.

The bridge consisted of 2 side masonry vaults faced with granite, and central lift part - wooden two-leaf draw span. Granite towers with lifting gears and long chains were placed on the river supports. The decking of the side parts of the bridge was paved with cobblestones (until 1830s the bridges on the Fontanka River had block wood pavement), the central span is covered with wooden decking. Sidewalks were below the paving and fenced off from it with high granite parapets in full length of the sides of the bridge. Railing repeated pattern of railing of the Fontanka River embankment, but its connections were interrupted by granite abutments. The same parapets, but sharp-angled ones, were installed on the piers between the posts of gazebos facing the water. At the four corners of the bridge at the entrances stone lampposts-obelisks with two oval-shaped lanterns on metal brackets were installed.

In the middle of the XIX century due to increased traffic of urban transport, the stone tower bridges: The reconstruction was started of Simeonovsky, Anichkov, Semyonovsky, Obukhovsky, Izmailovsky bridges with the demolition of the towers and replacement of the draw spans by the fixed ones.

Chernyshev Bridge and Staro-Kalinkin Bridge to the fullest extent possible have preserved their original appearance. Chernyshev Bridge is one of the brothers stood unchanged over a hundred years, undergoing only current repairs.

The bridges ensemble remaining an outstanding work of architecture, no longer played the same role, which flowed from the boundary position of the Fontanka River, behind which in the ХVIIIth century, essentially a suburb area begun.

In 1911-1912 the bridge was thoroughly repaired. The supports and arches were reinforced; wooden superstructure in the central span of the bridge was replaced by a metal beam one.

In 1915 at the entrances to the bridge obelisks with lanterns under the project of architect, Academician I.A. Fomin were restored. Also upper parts of the piers and abutments were rebuilt. The sidewalks were raised above the level of the roadway, and parapets separating them from the paving, was removed. All roadways were paved with cobblestone, and sidewalks on the sides – with granite slabs, and in the centre part - with asphalt.

Along the sidewalks granite gutters were laid.

In 1950 granite obelisks with lanterns suffered during the siege of the city were restored; and in 1967, architectural details were gilded.

In 1989 granite curb and drainage gutter of RSU Lenmostrest were reconstructed. 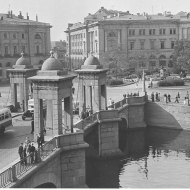 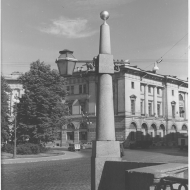