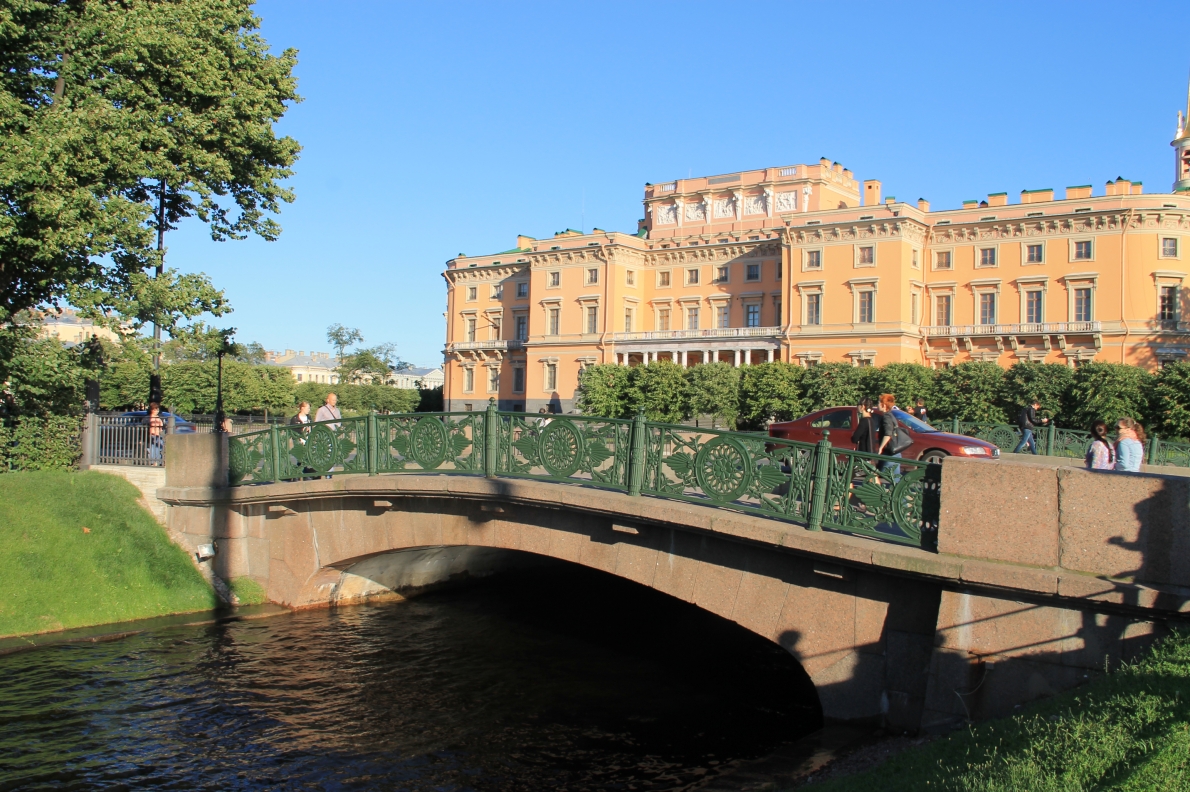 The first wooden bridge appeared there in 1733. It was built under the project of engineer Hermann von Boles. The original location of the bridge corresponds to the place where a stone retaining wall within the territory of Summer Garden is located now.

It was a girder bridge with supports on pile foundation, board facing of supports and wooden span structure lined with boards from the facades that resembled a single span arch structure with a gentle vault. There were wooden railings on the bridge.

In 1836-1837, during redevelopment of the district around Mikhailovsky (Engineers’) Castle, the bridge was rebuilt in a stone one. Its vault was built of brick, supports - from stone masonry on the pile grillage. The facades and supports were faced with granite. The construction of the stone bridge began in 1836 and lasted only 6 months. The haste was immediately reflected in its strength. After removing of a lagging jack the brick arch settled down, and the set increases every year.

Builders could not eliminate deformation, and in 1847 a new project of reconstruction of Nizhny Lebyazhy Bridge was drafted. None of the stone bridges of St. Petersburg was not subjected to such frequent reconstructions and renovations, like this one.

According to the project, the bridge design has no different from the previous ones. It is a single-span stone arch bridge with a brick vault, the facades are faced with granite. To reduce the thrust arch was put into a more gentle shape. It was supposed to install "transparent" metal railings of a simple pattern. However, the bridge was not built under this project.

Nevertheless, the bridge was rebuilt later but neither the author of the project nor the year of construction is known. According to the inventory list taken in 1880 span structure represented a brick vault of parabolic shape; facades were faced with granite. The railings consisted of cast iron sections installed between the tetrahedral bollards. Sidewalks was fenced from the interior by cobble stone with granite pillars, by three on each side, the roadway was paved with wooden ends.

In the early 1900s defects were detected again in a new brick vault. In 1904 the bridge was examined in connection with the preparation of the tram traffic opening - the results were not encouraging. The Commission recognized the unsatisfactory condition of the bridge.

In 1907 another reconstruction project according to which superstructure shall be consisted of lattice steel trusses was drawn up. Neither this one, nor the next-designed projects were implemented, and the bridge continued to fail.

Only in 1924-1925, under the project of engineers B.D. Vasilyev and A.D. Salarev, the bridge was reconstructed in the single-span concrete arch one. The superstructure is a solid reinforced concrete hance vault designed as an elastic arch. The bridge abutments was not reconstructed.

The railings are very similar to the railings of Sadovy Bridge performed according to a pattern ascribed to the architect K.I. Rossi.

The last repair was carried out to the 300th anniversary of St. Petersburg: waterproofing and railing gratings were restored. The roadway was covered with asphalt, and sidewalks - with granite.