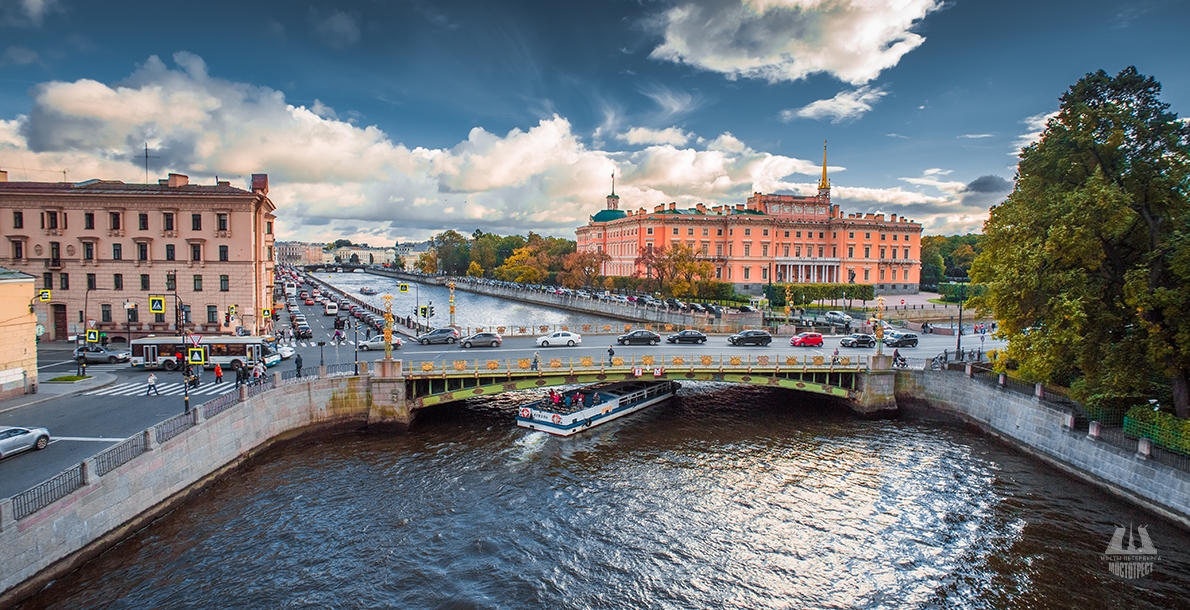 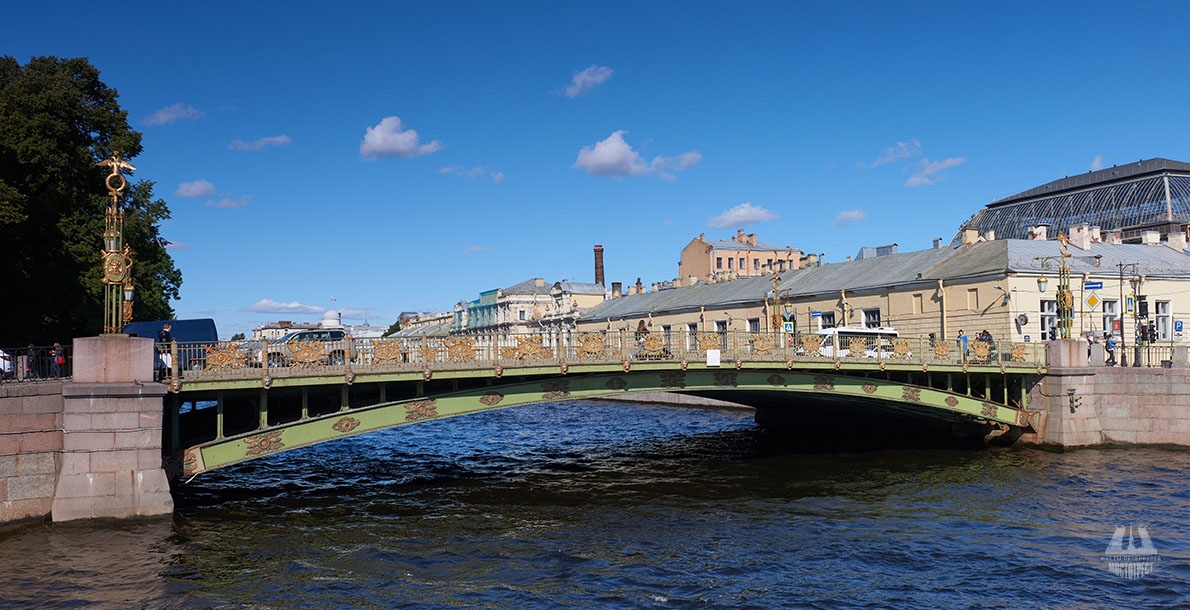 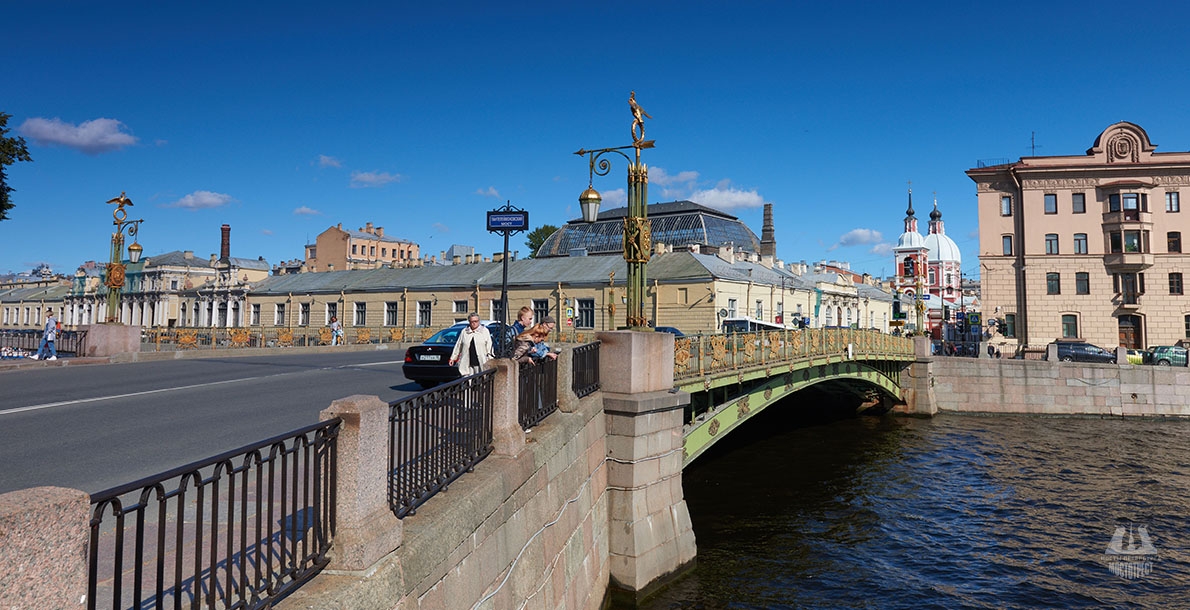 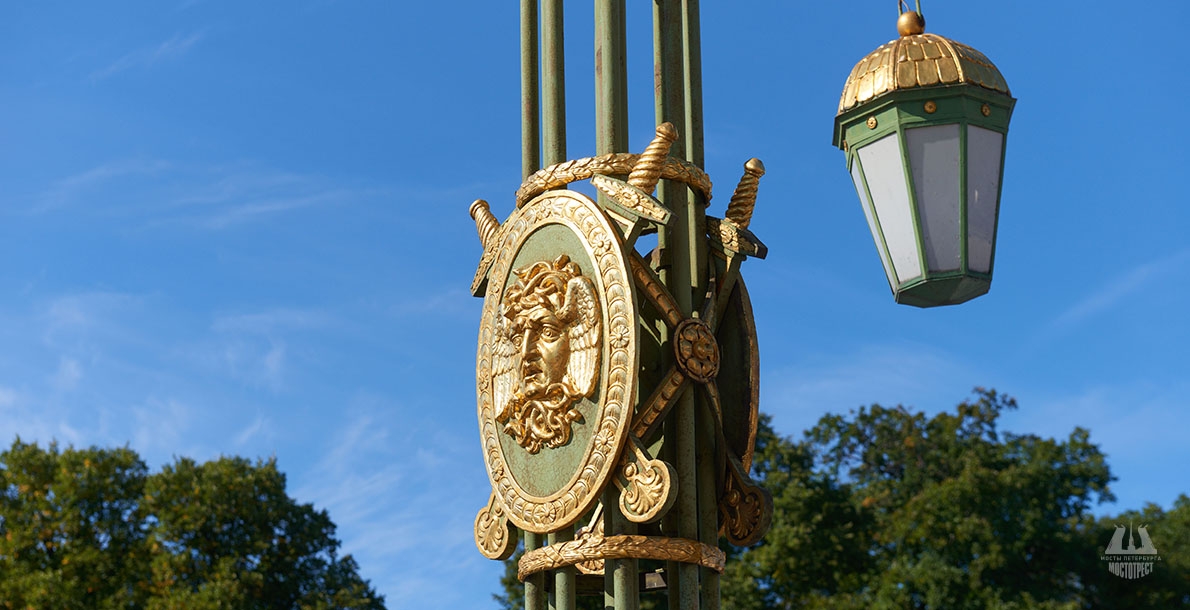 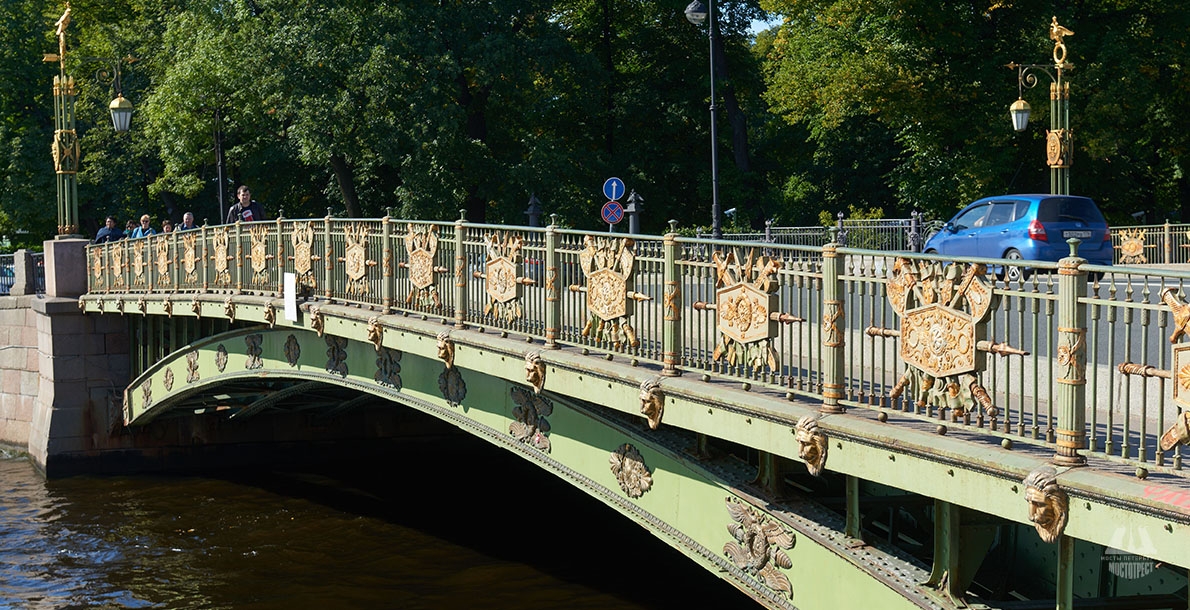 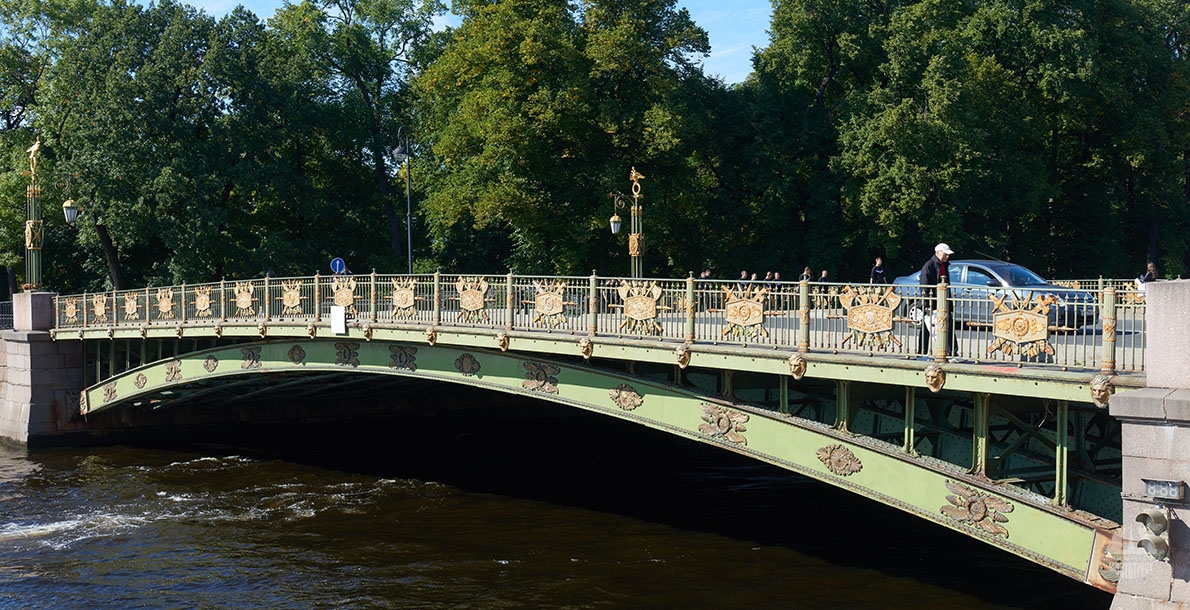 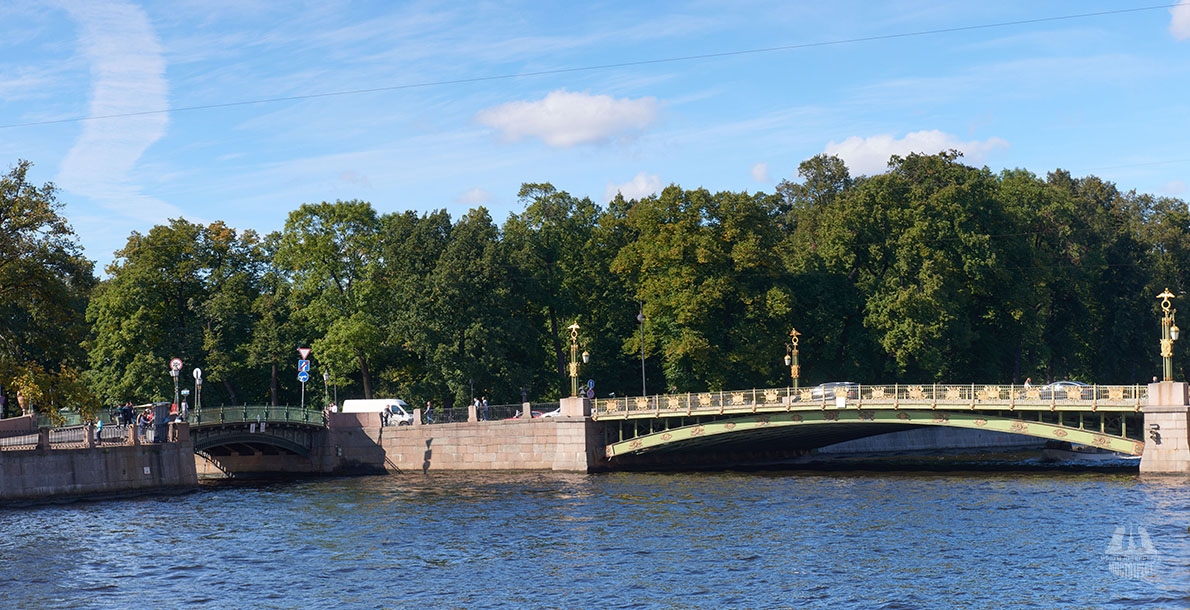 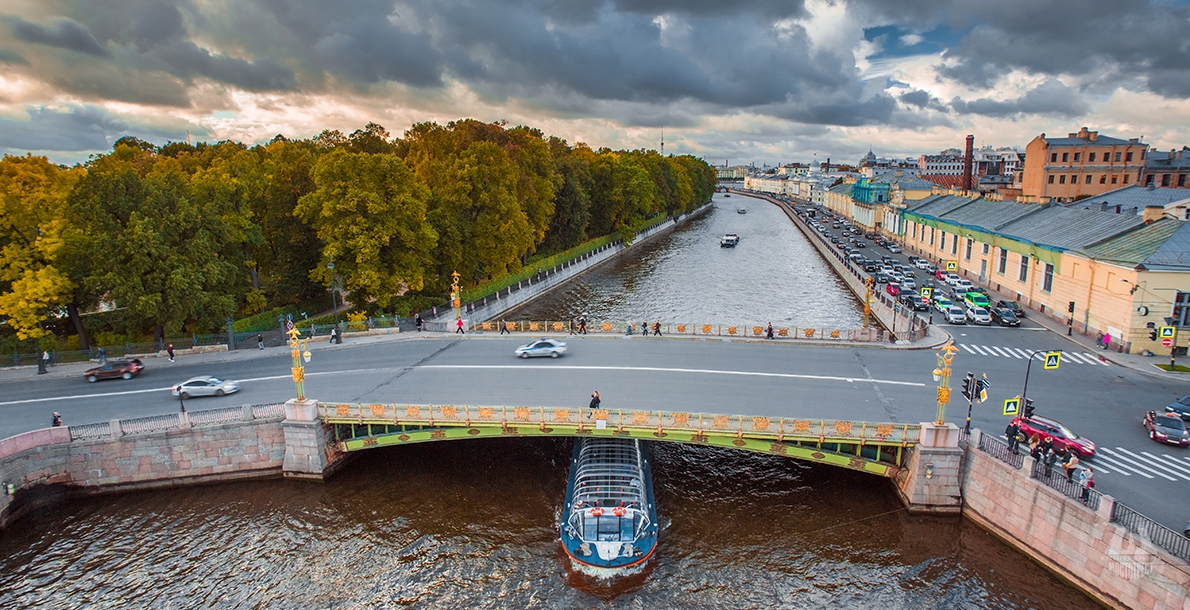 Panteleimonovsky Bridge is a bridge in Central District of St. Petersburg, connecting Summer Garden (Letny Sad) Island and Bezymyanny Island across the Fontanka River. It is one of the most beautiful and architecturally interesting bridges in the city.

In 1725-1726 a wooden bridge-aqueduct through which water was supplied to the fountains in the Summer Garden was built there under the project of engineer H. van Boles.

In 1748-1749 this aqueduct was replaced by a new one built under the project of architect F.B. Rastrelli in Baroque style.

Wooden aqueduct existed until 1777 and was demolished after the flood in the result of which the fountains were destroyed.

At the beginning of the XIX century, in connection with the redevelopment of the Field of Mars and Mikhailovsky Castle, in 1823-1824 the first chain bridge over the Fontanka River was built. The construction consisted of two cast iron portals installed on abutments through which 5 rows of paired chains were spanned. Serving as the bearing elements of the bridge, they supported the wooden deck construction of the roadway by means of vertical chains. A feature of the chain bridge was the supports, which served not only the main structural elements, but were richly decorated.

Portals consisted of five cast-iron columns, topped with architectural elements and openwork stiffeners in the form of buttresses for stability and rigidity of the whole suspension system. The carrier chains on the bridge width were distributed unevenly and in accordance with the organization of motor and pedestrians traffic. The bridge was designed to the weight of 1,500 people.

From November 1833 to August 1834 near the Summer Garden in a house on Panteleymonovskaya Street Alexandr Pushkin lived. "In St. Petersburg, near Chain Bridge, against Panteleimon, in the house of Olivier" - such an address specified in his letters to his wife from Boldino in autumn 1833.

The bridge work properly for 83 years and was demolished in 1906 due of the collapse of equivalent Egyptian chain bridge across the Fontanka River, which occurred in 1905.

In 1907-1914 under the project of engineer L.A. Ilyin a modern single-span metal arched bridge was built instead of the chain one. The bridge represents a structure consisting of 12 hinged shallow arches with parallel chords and superstructure pillars that support elements of the roadway, consisting of metal girders, cross beams and decking of trough iron. There are massive stone abutments on pile foundations.

Sections of cast iron railing represent closely spaced darts with overlaid reinforcement of the arranged military attributes: tangled ribbons, peaks, shields. Stand lamps in the form of bundles of high peaks, tangled with wreath in the middle, decorated with overlay elements of military reinforcement in the form of oval shields with reliefs of jellyfish on a background of interlaced swords of antique form. The lights are made in the form of a truncated octahedral pyramid and suspended to the brackets.

In 1925 on the occasion of the 100th anniversary of the uprising of the Decembrists, the bridge was renamed to Pestelya Bridge.

On October 4, 1991 the bridge returned to its original name Panteleimonovsky Bridge.

In 1994 the Monument Tchizhik-Pyzhik was installed next to the bridge.

In 2000 in the frame of the "Shining City" program architecture lighting of the bridge was made. 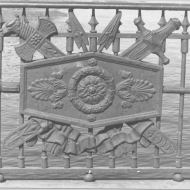 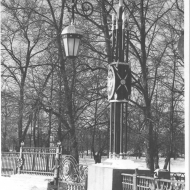 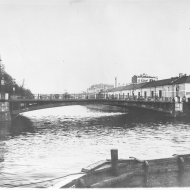 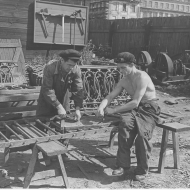 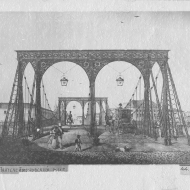