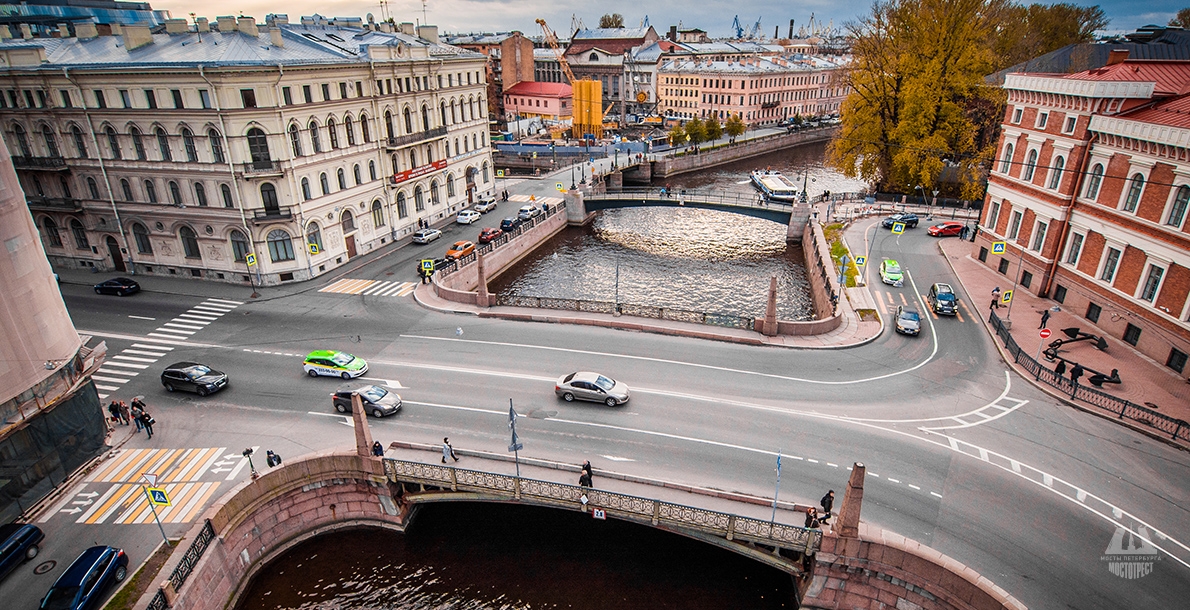 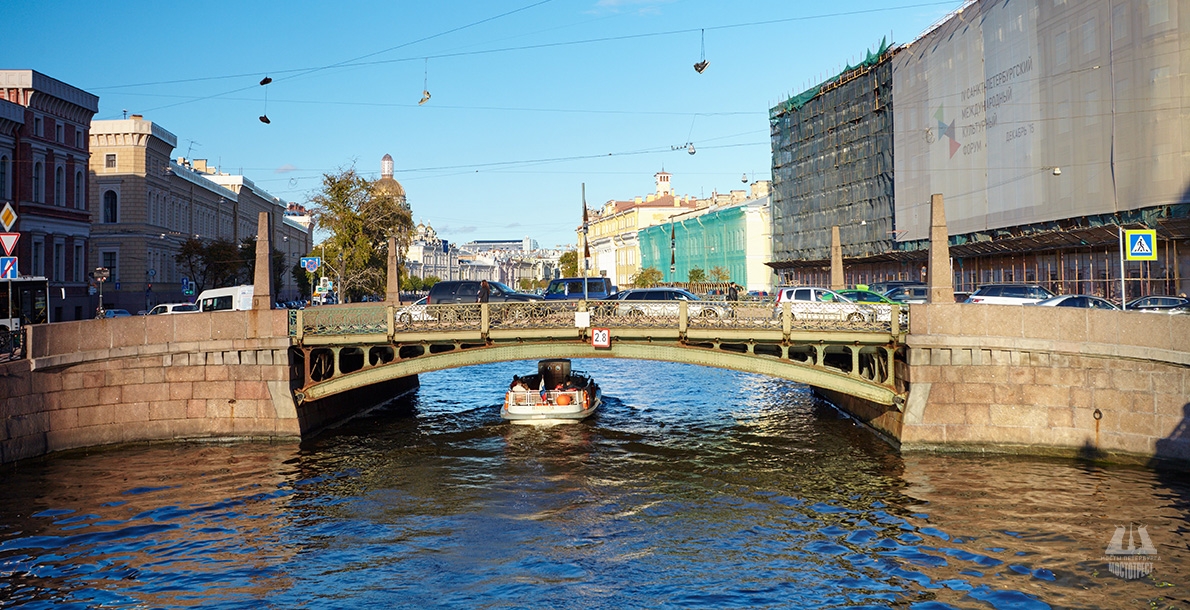 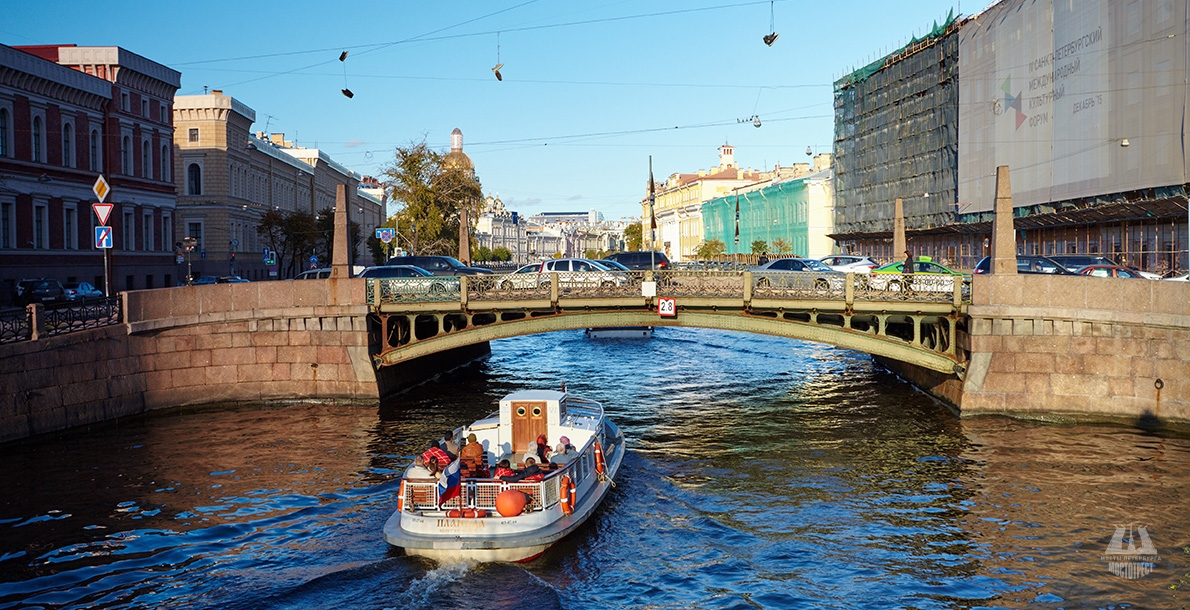 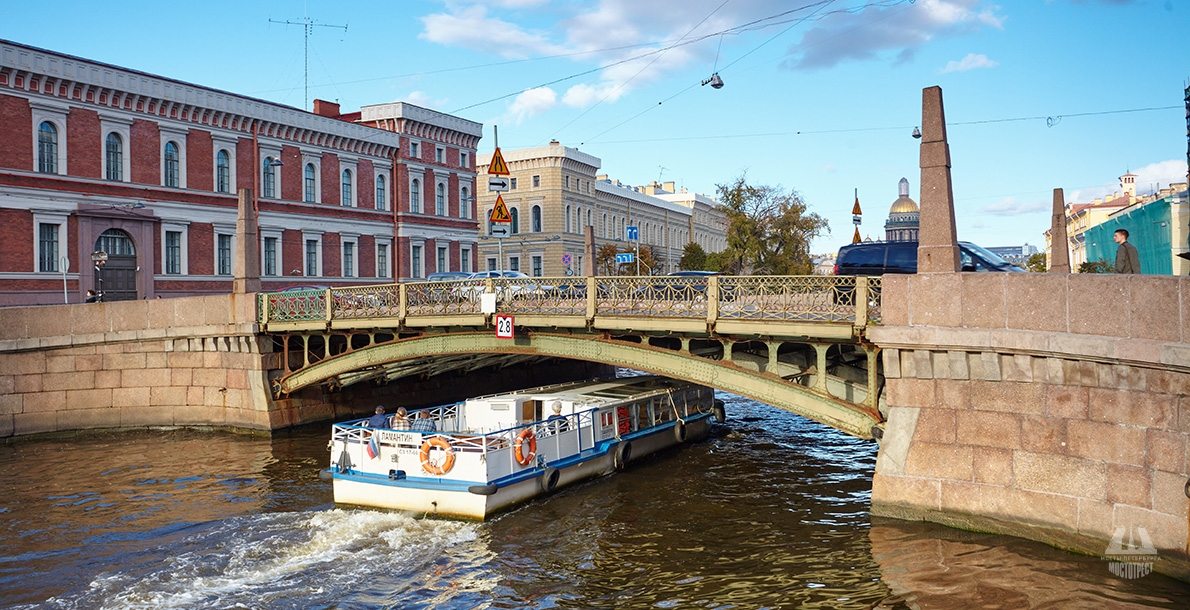 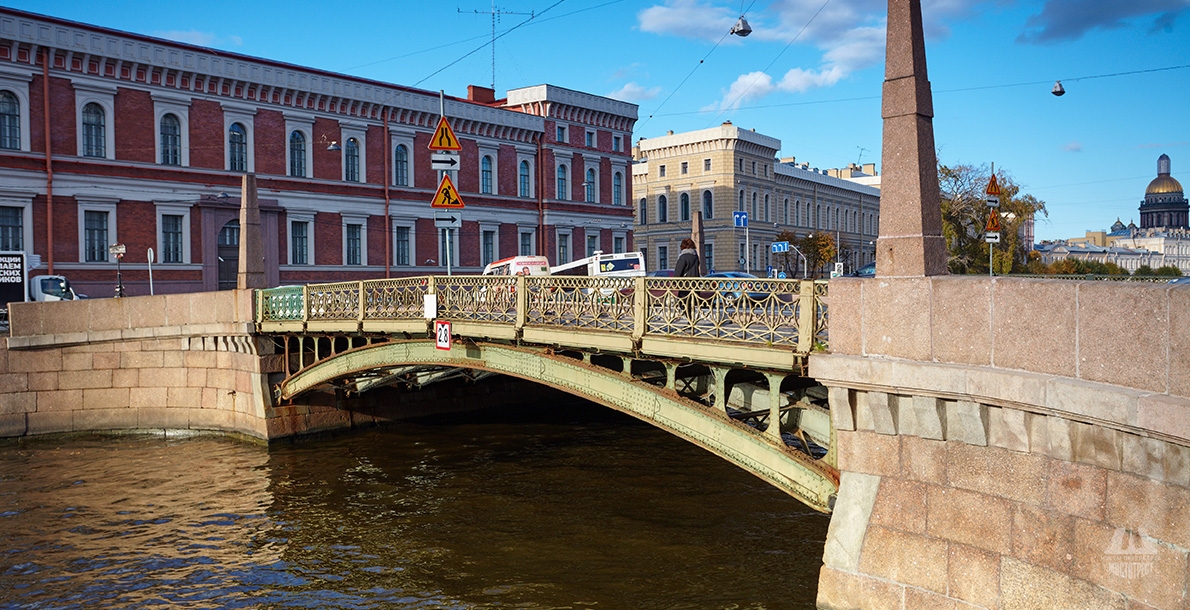 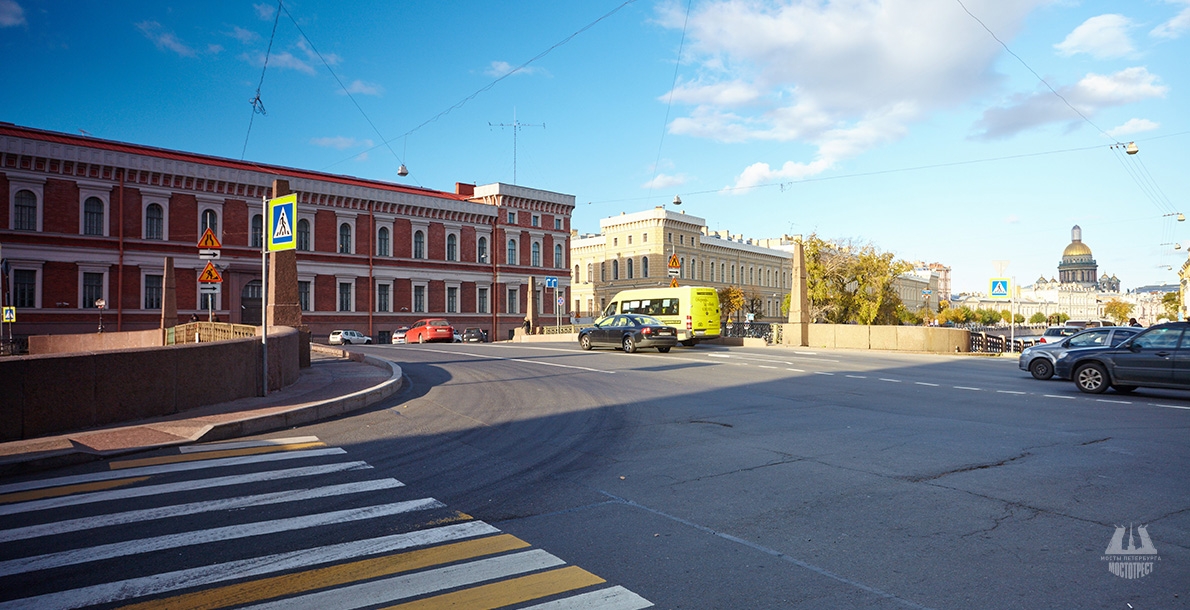 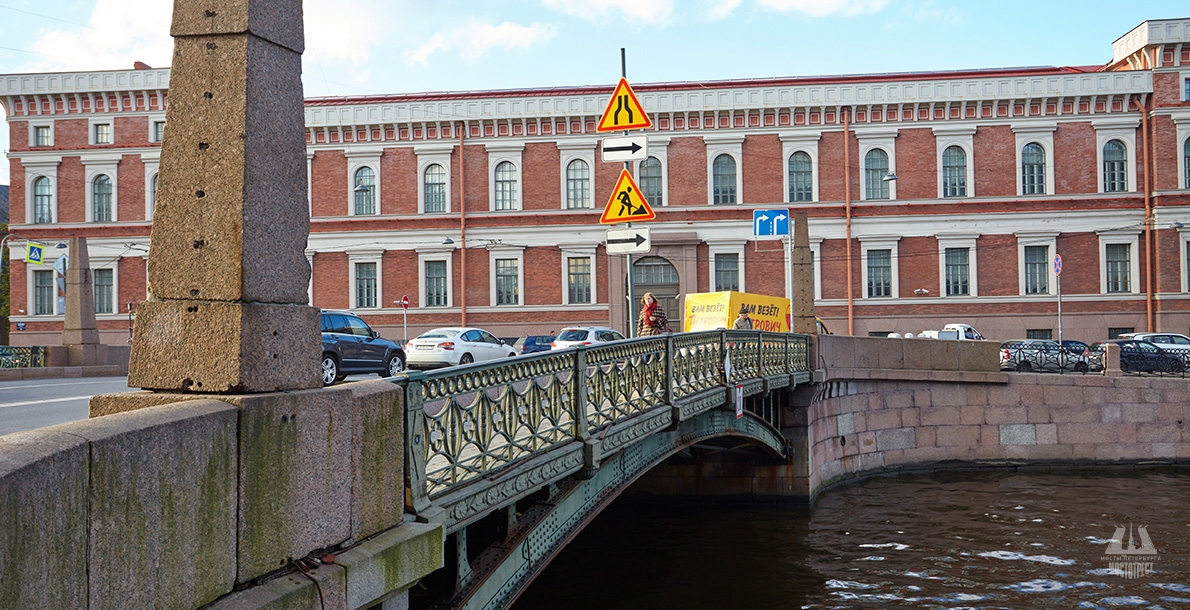 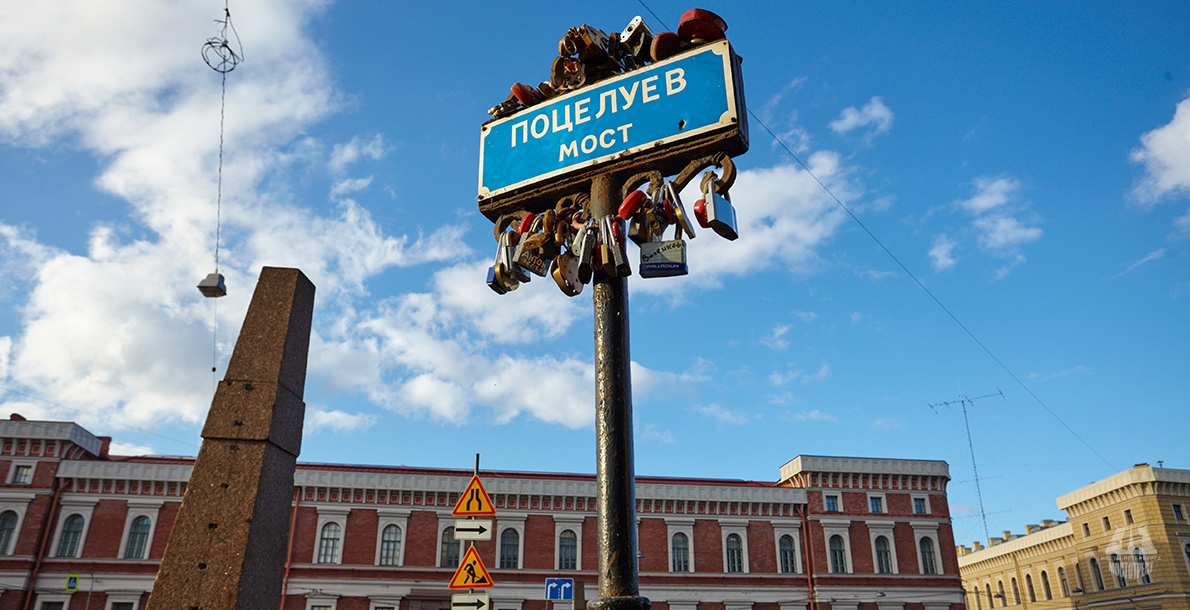 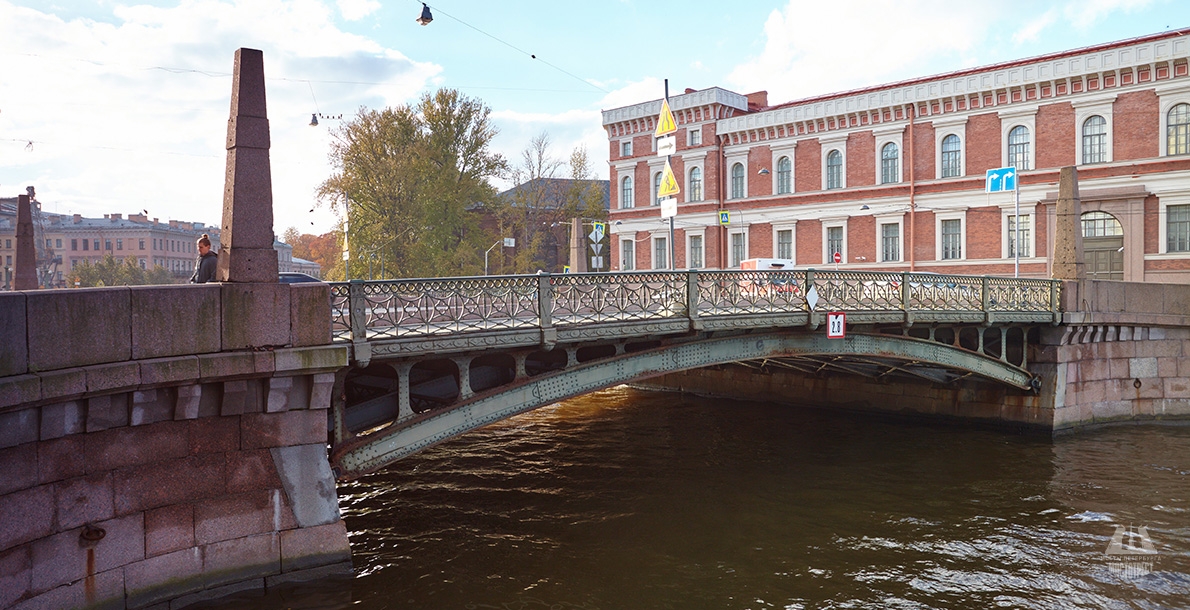 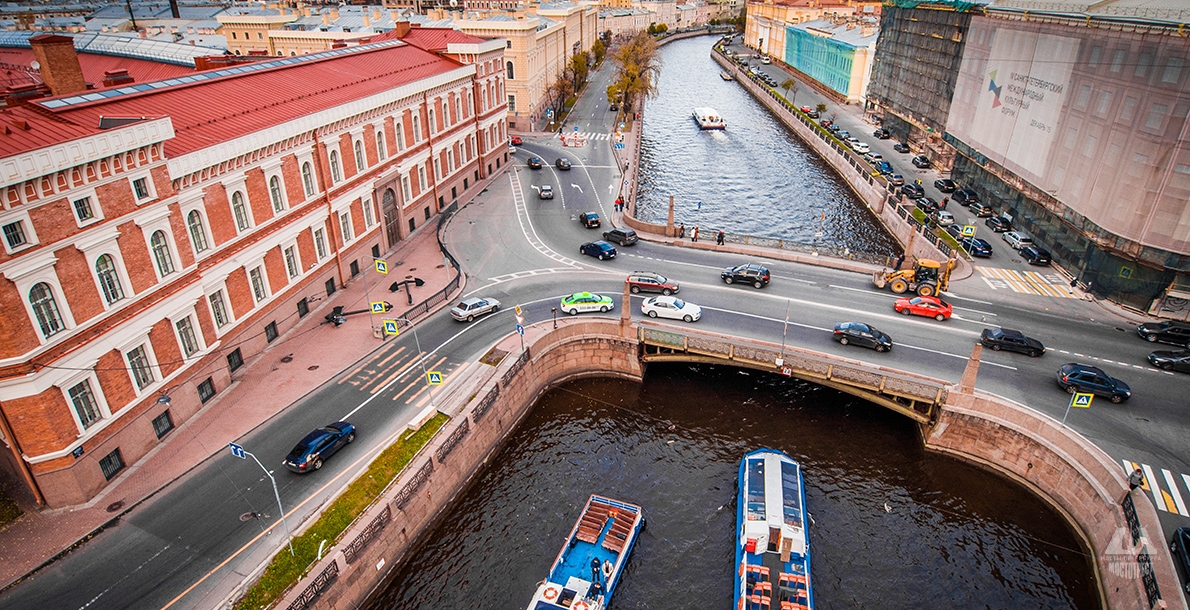 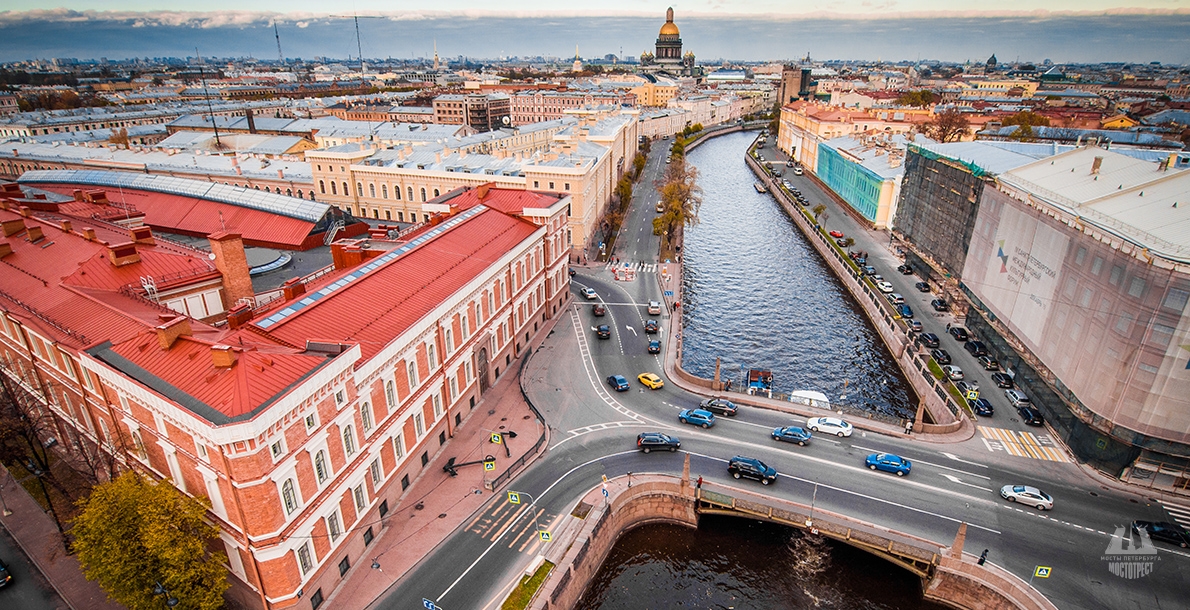 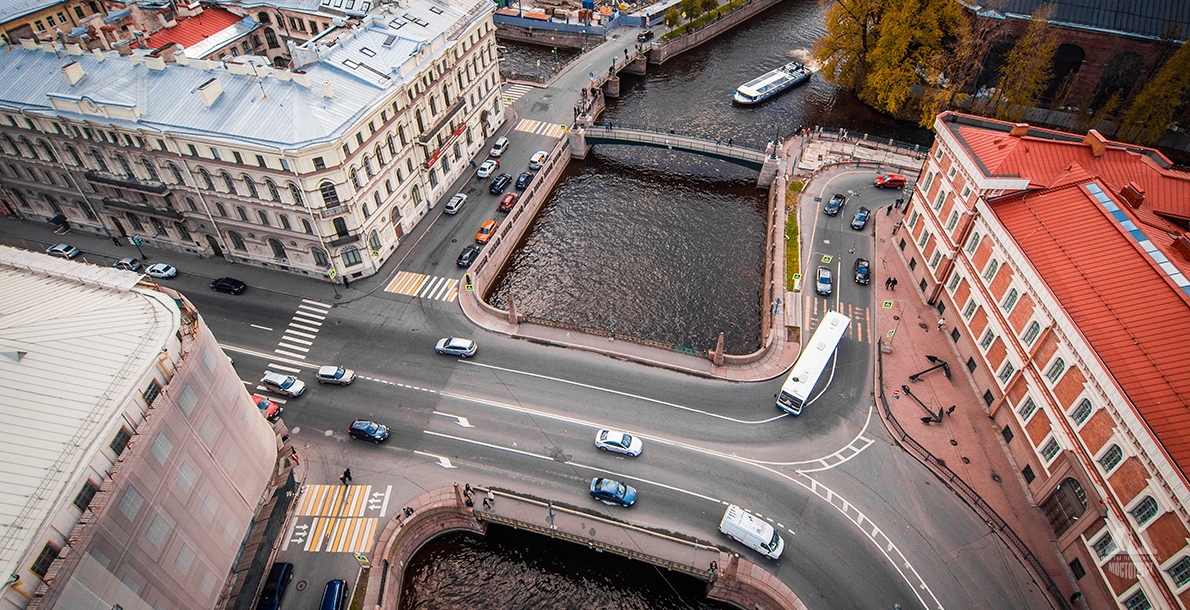 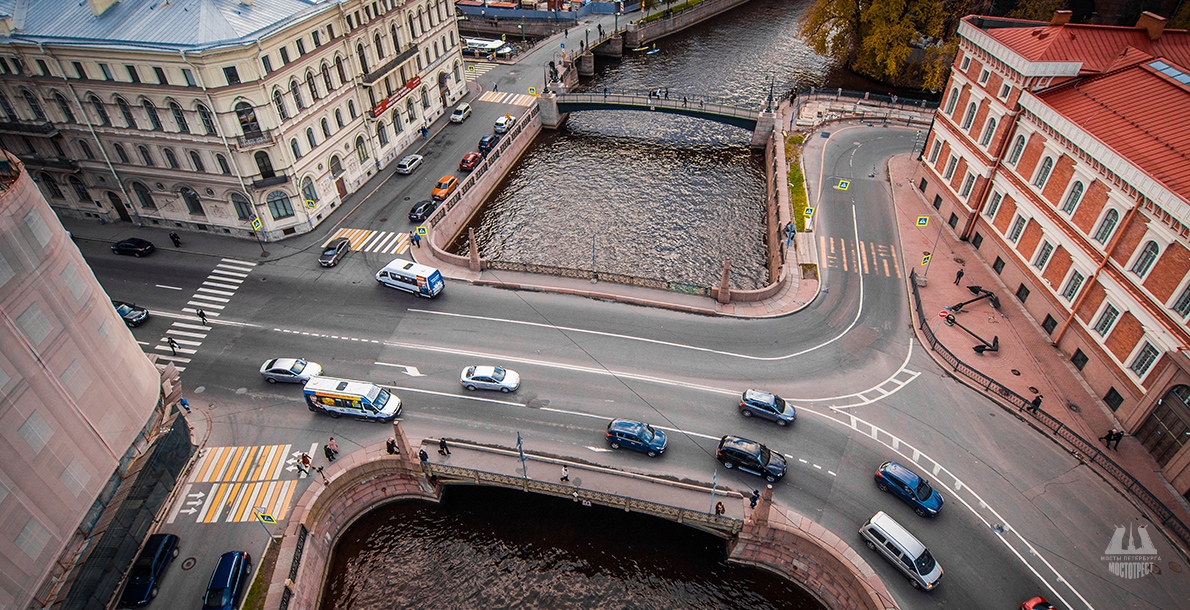 Potseluev Bridge is a bridge across the Moyka River in Admiralty District of St. Petersburg, which connects Kazansky Island and the 2nd Admiralty Island. It is a monument of the beginning of the cast iron bridge construction, retaining its appearance from the beginning of the XIX century. It is one of the most significant places in St. Petersburg, which is overgrown with legends due to its name.

Since 1738 a pedestrian wooden bridge existed there.

In 1768 the bridge was rebuilt into the 3-span wooden beam bridge on stone piers. The bridge became a road and pedestrian bridge.

The bridge was built under the typical project of cast iron bridges over the Moyka River. Those bridges are made of prefabricated elements representing cast-iron tubing connected to each other by bolts.

Cast iron elements of the bridge were made in the Ural factories of N.N. Demidov. The bridge had massive rock abutments on pile foundation, faced with granite. Cast-iron railing was installed on the bridge. At the entrances there were granite obelisks on which reinforced brackets with lanterns, typical of the XIX century are fixed. The roadway of the bridge was separated from the curb with cast iron railing of a simple pattern with bollards.

Such internal railings were installed on all the iron bridges, but they have survived only on Red (Krasny) Bridge and Pevchesky Bridge. There was a diabase stone pavement on the bridge.

In 1907-1908 in connection with the laying of tram tracks the bridge was renovated. Cast-iron arches were replaced by metal riveted 2-hinged ones. The bridge was widened by the transferring of sidewalks onto the consoles. The abutments were rebuilt up to the water level. The architectural design of the bridge retained in its original state.

In 1952 quadrangular lights were restored by the type of the lights installed on Red Bridge.

In 1969 balls on the obelisks were gilded.

In 1998 superstructure was painted, granite railing were replaced.

There are many legends associated with the name of the bridge. They said that in the XVIII century, when the city boundary just reaches the Moyka River, the bridge served as a place of meetings and farewells. They said goodbye to their loved ones, all those who had to leave the city. It was believed that the bridge is named Potseluev because it leads to the gate of the Guards naval depot, and it was a place where the sailors said goodbye to their lovers.

In addition, there was a common version that prisoners were saying goodbye to their families (the prison is nearby), thus there were a lot of kisses.

According to one legend the name was given due to the fact that in the old days it was the custom among lovers: to kiss each other when passing over the bridge in order to never to leave their lovers.

There are also an ancient custom of kissing people travelling and passing through the bridge every time, regardless of the degree of closeness and kinship.

The tradition preserved that in the old days the Bridge of Kisses served as a place for meetings between young lovers, for some reason compelled to hide their feelings. 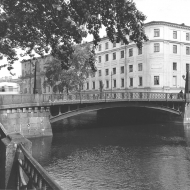 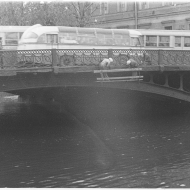