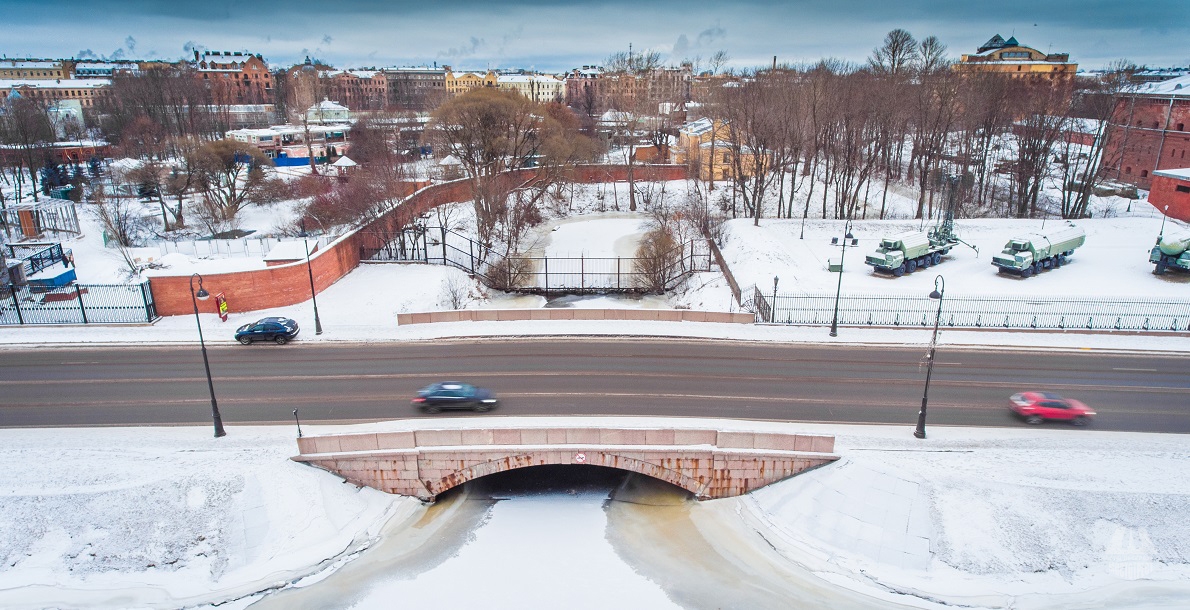 The gullet and the flow received their named from the name of the external auxiliary strengthening - Kronwerk (German Kronwerk - crown-shaped strengthening), erected soon after the construction of the fortress in the form of a polygon with wide water moats in front of it and separated from the Peter-and-Paul Fortress by a water duct.

In 1752 Kronverk was rebuilt as an earthen building on a stone foundation and the canal around it was dredged and expanded, and wooden bridges through the canal were built in 1828: Eastern Bridge and Western Bridge.

In the XIX century Kronwerk was used for different purposes. Thus, in 1841 in the areas of strengthening artillery property was kept, and in 1860 ancient Russian and captured artillery and flags were placed there.

In 1977 a wide transport highway was created along the waterfront of the Kronversky Strait. With the improvement of the territory adjacent to the Kronverksky Ditch, under the project of engineer B.B. Levin of Lengiproinzhproject and architect G.V. Govorkovsky, single type bridges were built over the Kronverksky Canal - single-span structures in the form of three-hinged reinforced concrete frame with decorative facade arches lined with granite. One of those bridges was Western Artillery Bridge respectively.

The bridge abutments are massive reinforced concrete ones on pile foundation and faced with granite. The railing in the form of granite parapet is installed on the bridge. There is an asphaltic concrete pavement on the bridge. The sidewalk is separated from the roadway with granite kerb. The bridge appearance is similar to the appearance of the neighbouring Eastern Artillery Bridge.