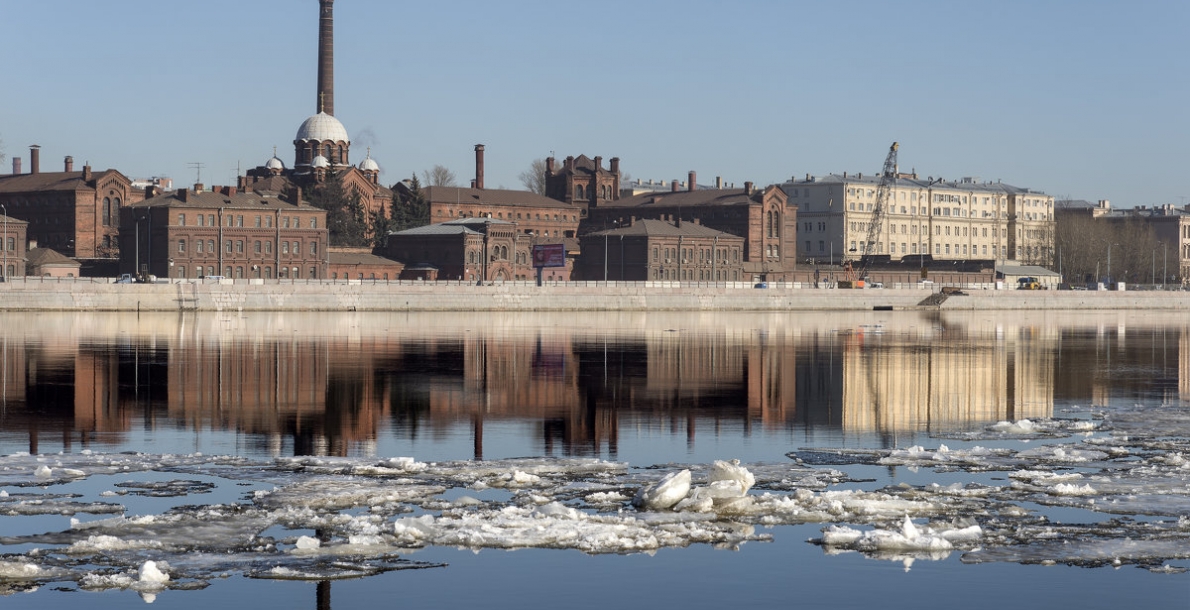 Arsenalnaya Embankment is in Kalininsky District, on the right bank of the Neva River between Arsenalnaya Street and Lebedeva Street which is located in the alignment of Liteyny Bridge.

Near the embankment in the middle of the XVIII century there were barns of "Kompaneyskie Dvory", where sea-crafts of trading companies approached. Historically on the territory of the left and right banks of the Neva River in this district there were manufactures of artillery arms.

In 1711 Peter I established a Gun foundry on the left bank (in the alignment of the present Liteyny Prospect). The Arsenal factory building was soon built, and then one more building — the New Arsenal factory was built when the old one was adapted for other needs.

In 1851, in connection with the floating bridge erection in the alignment of Liteyny Prospect, the building of the New Arsenal factory was disassembled, and services were moved to the Vyborg Side, the territory between Simbirskaya Street (modern Komsomola Street) and embankment of the Neva River.

During construction of the constant Liteyny Bridge in 1875-1879 the embankment around the bridge was reinforced with wood. In 1868 the Finland Railway Station was built. A wooden building separated it from the embankment. Only line ends of station tracks of the railway were laid at the Neva River. A little way upstream of the railway tracks there was a pool for small boats repair, and the Arsenal building had a granite platform with a lifting crane.

The square before the Finland Railway Station was developed with modern amenities in memory of V.I.Lenin's historical performance on April 3, 1917. On November 7, 1926 the monument to Lenin was erected near the railway station. In 1928-1929 on the embankment section from Lenin square to Mikhailova Street under the project of engineers V.D. Vasilyev and Ye.V. Tumilovich the bank slope was reinforced with diabasic paving of concave shape with driving of wooden sheet piles. The fence was made of rails. In 1945, during reconstruction of the square, the monument to Lenin was transferred to the centre; the fence was replaced with a cast railing with round bollards.

In 1965-1967 Liteyny Bridge was reconstructed, on the right bank the traffic interchange in two levels was organized. The through passage on the embankment is carried out through a tunnel under the bridge. The embankment near the bridge becomes a two-storey one with a passage under the bridge. The embankment project was created by architect Yu.I. Sinitsa and engineer L.A. Wildgrube. Along Lenin Square axis a parade monumental descending to the water with 136 meters length under the project of architect A.V. Vasilyev and engineer L.N. Sobolev is settled down.

The finishing section of the embankment, from Mikhailova Street to Arsenalnaya Street, was built in 1981 under the project of architects V.M. Ivanov and Yu.G. Shindin, and engineer L.N. Sobolev. The embankment after the descent gradually becomes two-storey.

Beside the abovementioned objects, still on the embankment there is a complex of city prison "Kresty" which is planned to be moved to Kolpino.

It is necessary to notice that near the embankment the Neva River reaches its maximum depth — 24 metres.