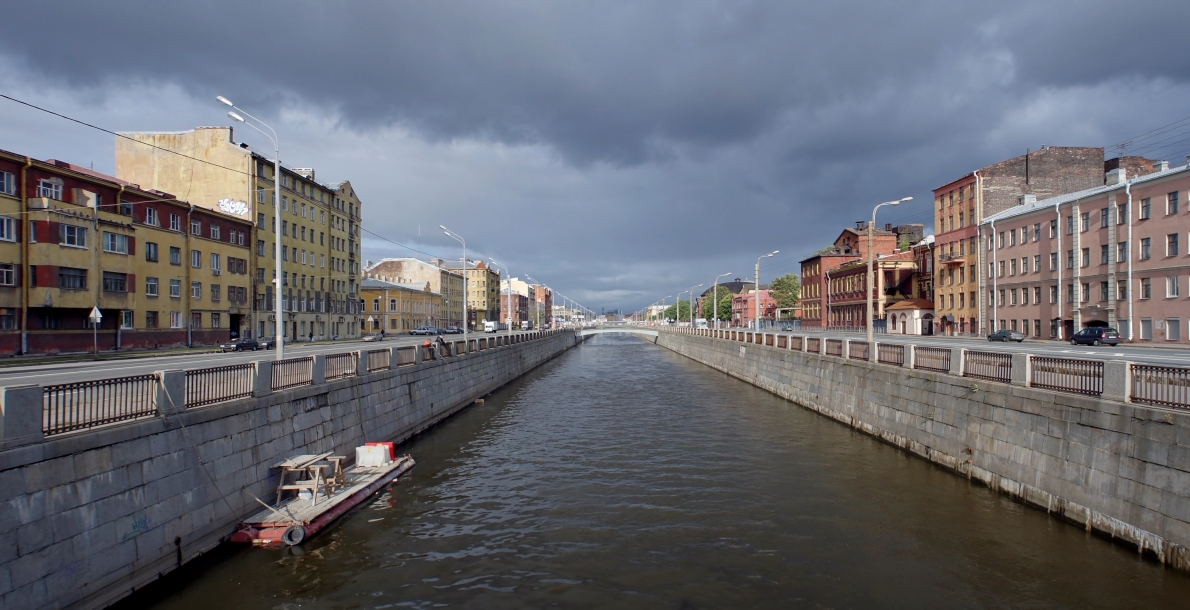 The Obvodny Canal Embankment expands from east to west: from the Neva River (near the Alexander Nevsky Monastery) to the Yekateringofka River.

Construction of the Obvodny Canal was planned just in 1765 by the proposal of architects A. V. Kvastsov and I. E. Starov. The Obvodny Canal created the city boundary as if outlining it from the south. Hence it is named so.

It is interesting that the canal is designated in the layout of 1820 as the City Moat, this is the one moat for the entire time of Saint Petersburg existence. In the first half of the XIX century there were the following name versions: the Zagorodny Canal, the Obvodny City Canal, the Novoobvodny Canal.

The initial section of the canal from the Ekateringofka River towards the Ligovsky Canal to Zvenigorodskaya Street was cut in 1769-1776.

In 1804 the city authorities decided to construct a canal that would dam out water of the Neva River from Saint Petersburg in case of floods. Additionally, this canal was required for the city to transport cargos to industrial enterprises located in the suburbs. The works were managed at first by engineer I. K. Gerard and then by engineers P. P. Bazen and B. P. E. Klapeiron.

In October, 1833 the grand opening of the Obvodny Canal for navigation was taken place. Along the banks the factory line of the capital was historically formed, cargo and materials were delivered by water. Currently in some buildings of these factories there are cultural and creative spaces.

In 1850-1860 a solid flow of ships and barges with variety of goods was carried out along the Obvodny Canal. Step by step, by the end of the century, the canal was abandoned due to the port and warehouses were transferred to Gutuevsky Island.

During construction of the canal the bank slopes were not reinforced. The low wooden wall was made at the slope foot. Disturbed wooden reinforcements were seen from three locations, in the canal source at the Neva River, where the canal ran into the Ekateringofka River and partially on the left bank from Novo-Kirpichny Bridge to Novo-Kamenny Bridge. Small section of the banks were also reinforced, which were adjacent to the bridges.

According to the permanent materials, reinforcement of the canal banks began in 1930.

So in 1932-1934, under the project of engineers I. B. Tarasenko, G. K. Usov and architect K. D. Dmitriev, 1200 m long embankments construction began at the area from Novo-Petergofsky Bridge to Novo-Kalinkin Bridge on the right bank. It was a high vertical wall made of rubble masonry based on a wooden pile foundation.

In 1960 during reconstruction of Novo-Kamenny and Novo-Moskovsky Bridges traffic tunnels were constructed along the canal, and the embankment walls on both banks from the upstream and downstream sides of Novo-Kamenny Bridge became double-level.

On the upstream side of Novo-Kamenny Bridge, on the right bank of the canal there is the wall of the second level of the embankment created with hinged blocks secured on the piled rack. This construction was carried out in 1960-1970 under the projects of engineers A. D. Gutzeit, B. B. Levin, P. P. Ryazantsev, architects V. M. Ivanov and L. A. Noskov.

The banks were subsequently reinforced in two directions using the old embankment walls and by construction of new walls with conceptually alternative design at open spaces.

In 2010 within the project of center bypassing the south embankment was actively reconstructed at the area from Atamansky to Shlisselburgsky Bridges with access to Sinopskaya Embankment.