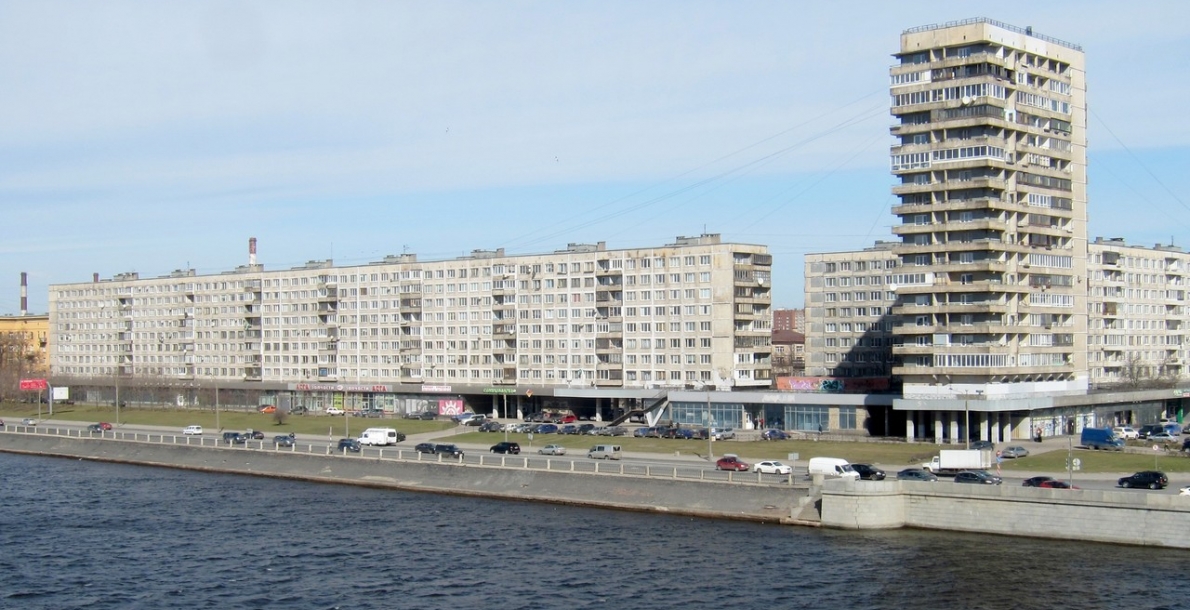 Oktyabrskaya Embankment is located in the Nevsky District on the right bank of the Neva River from the mouth of the Utka River downstream to Finland Railway Bridge. It is the longest embankment of the city and the first one from the upstream of the Neva River.

On the right bank, long before the October Revolution, the factory suburb was established. There were several brick factories and sawmills, and close to them there were workers’ settlements (Vesyoly Posyolok Settlement, Malaya Rybatskaya Settlement, Sosnovka Settlement, Klochki Settlement). Therefore, there was no continuous development along the embankment.

On the initiative of S. M. Kirov, in 1932 landscaping of the embankment began, and shore reinforcement from Finland Bridge to the future Volodarsky Bridge was carried out. There in the winter, in case of ice dams, the Neva River bed is overloaded with small compacted ice. The water level can rise up to 3 meters, and ice hummocks are overloaded in the river up to 8 meters high, as, for example, it was in 1928. In that case, the applied shore reinforcement structure was the same as on Pirogovskaya Embankment, Tuchkov Dam and the embankment around the stadium named after V. I. Lenin (current Petrovsky stadium) being constructed approximately at that time.

This sloping embankment with a concrete banket on a wooden pile foundation was made under the project of engineers G. K. Usov, I. B. Tarasenko and architect K. M. Dmitriev. The concave slope is paved with grout-based blocks and rests on a low banket. Two rows of stone masonry and also based on the grout and a layer of broken brick or rubble stone with thickness of 15 cm were the foundation under the pavement. On the first section with water depth of down to 2 m in front of a wall - pile foundation of two pile rows; and on the second section with water depth of down to 5 m – pile foundation of three pile rows. Along the embankment there are stair descents with width of 2 to 5 m.

Areas adjacent to Volodarsky Bridge were designed as a high granite wall simultaneously with the construction of the bridge in 1938. During the bridge rebuilding in 1993 a 82 m descent was built under the bridge, which incorporated part of the existing high wall.

The first repair of the embankment was in 1964 selectively in the area from Finland to Volodarsky Bridges with wooden dowel driving in some place, and repair of diabasic paving. In the 1980s many areas of the embankment wall between Finland and Volodarsky Bridges were exposed to light repair, which included the following works:  restoration of the destroyed banket, paving with diabasic blocks, strengthening of railing bollards. The area between the abutment of Finland Bridge and the snow discharging pier with the length of 637 m has undergone major overhaul with driving reinforced concrete sheet pile in front of the wall. The sheet pile is integrated by a reinforced concrete beam, on which blocks of the low wall are mounted. New structures are combined with the existing ones, and they shall function as a single unit.

Currently, you can still find a few industrial enterprises along the embankment, a lot of fuel stations, and also housing construction is actively performed. The embankment is an important route for those who drive off from the Ring Motorway to the city from the side of Bolshoy Obukhovsky Bridge.