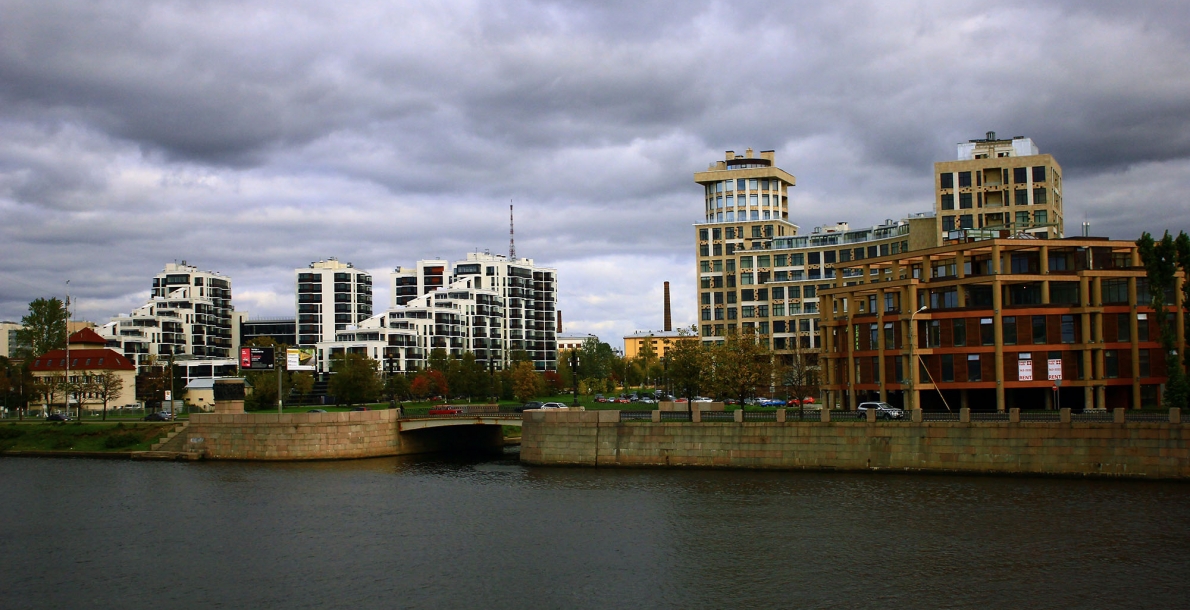 Pesochnaya Embankment runs along the left bank of the Malaya Nevka River from Kamennoostrovsky Bridge to Bolshoy Krestovsky Bridge on the northwest shore of Aptekarsky Island of the Petrogradsky District.

In the past, the embankment itself was located from Kamennoostrovsky Bridge to Grot Street.  Then the western part of the island, when the Karpovka River fell in the Malaya Nevka River, was a large green area with ponds and streams.

At the beginning of the XIX century, a large family estate of Laval was located there. It served as a meeting place for Decembrists and many famous people of that time. Over time, the most part of the island was divided into allotments.

The first bank protection of Pesochnaya Embankment was made in 1915 at the area from Grot Street to wooden Kamennoostrovsky Bridge. It was a typical wooden bank protection used everywhere on small rivers, such as the Smolenka River. The protection consisted of guide and anchor piles which supported a solid wall of wooden filler. Ground elevations were raised, heavy soil bedding were made.

Bank protection lasted until 1951 when there arose a need for its repair due to the tram lines laying along Vyazemsky Lane and the Malaya Nevka River embankment with tram running on Kamennoostrovsky Bbridge after its reconstruction. A banket of 250 m long was built, it connected the reinforced concrete sheet piling and guide piles.

In 1959, in this area the railing was set as per Rumyantsevsky descent of Universitetskaya Embankment. When rebuilding the embankment in 1968, the railing connected to the first descent, and it was overhauled in 1975.

The embankment in its current form began landscaping from Kamennoostrovsky Bridge to Dal Street in 1968, and the second part - up to the mouth of the Karpovka River was built in 1976.

The embankment is a low pile foundation banked wall with a green slope. For the purpose, the slope is not destroyed, perforated reinforced concrete plates which are the frame without the bottom for turf laying were installed in its base at the precast wall banket. Along the slope shoulder, a border of a low sheared brush is planted, and the sidewalk is separated from the roadway with a line planting of lindens. Along the embankment there are a lot of greenery and old trees. All that refers to the days when Aptekarsky Island was a territory for summer houses.

In 1975-1976, due to the need to arrange a through drive on the left bank of the Malaya Nevka River, at the mouth of the Karpovka River, Molodezhny Bridge was constructed and became an extension of Pesochnaya Embankment. The surrounding area was changed. A low shore was made up, flow paths were dried up, the bed of the Karpovka River was aligned and expanded. Along with the bridge the last section of Pesochnaya Embankment was built. This is a high wall faced with granite adjacent to Molodezhny Bridge on one side, and on the to Bolshoy Krestovsky Bridge on the other side.

Each bridge has descents to the water. The most main one is from the upstream side at Molodezhny Bridge. Not far away, upstream, on the embankment a pavilion for meteorological observations was built, it belonged to the Information Forecast Centre located on 48, Professor Popov Street. At the same time, the complex of Leningrad Youth Palace was built.

There are a lot of descents on the embankment. Two large descents are located opposite the Youth Palace and House of Artists. The front descent at the House of Artists has two heavy rhizolithes decorated with stone masks of lions from the side of water side.