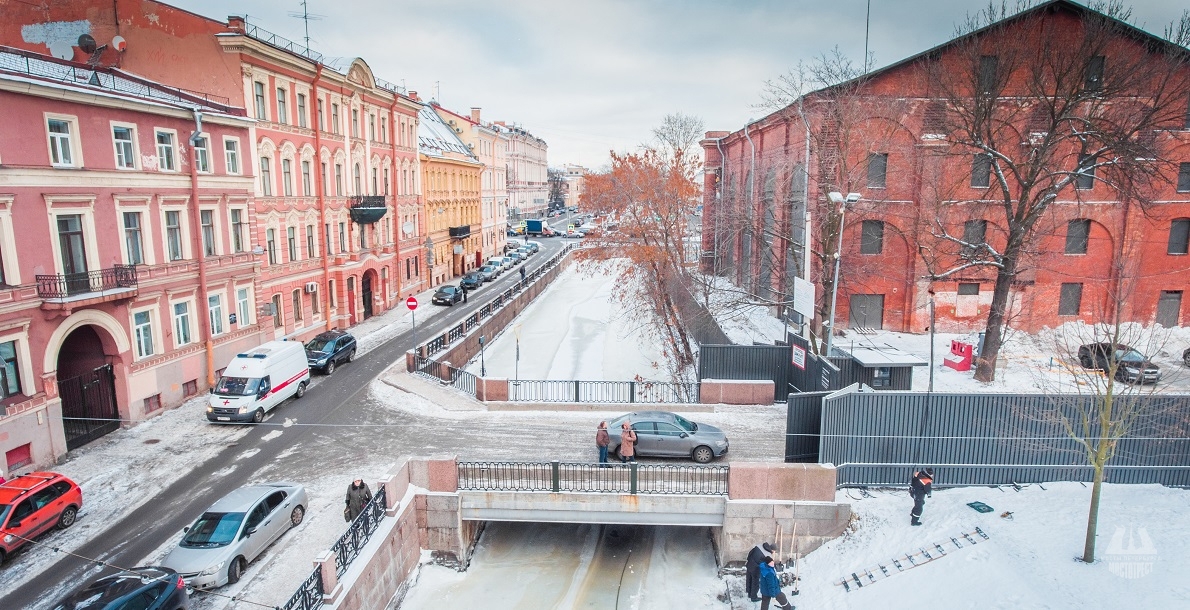 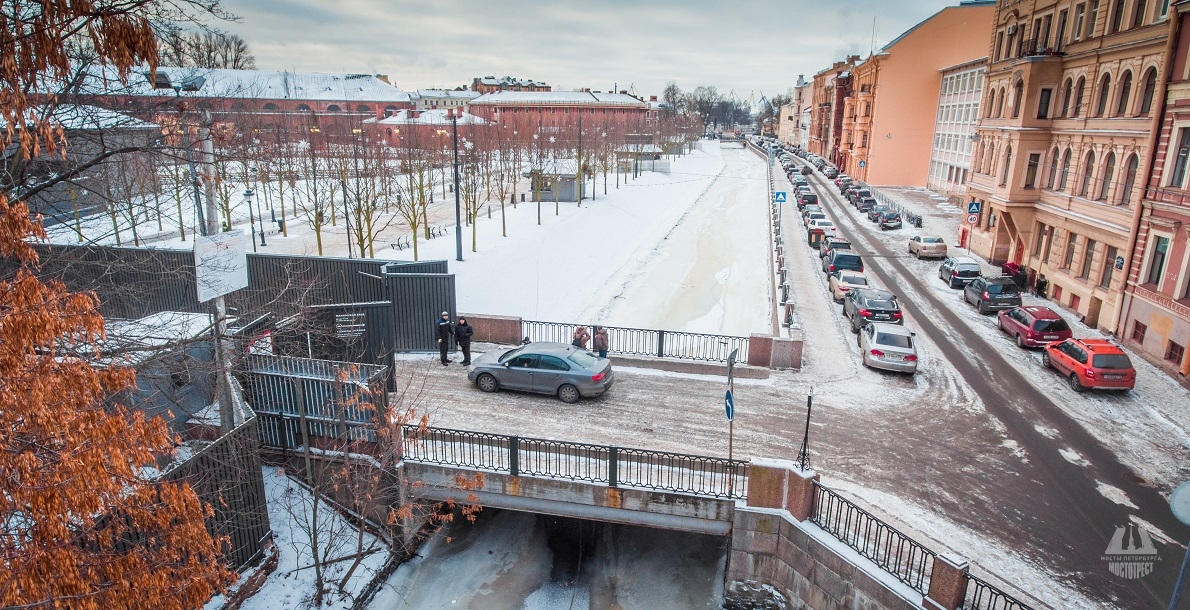 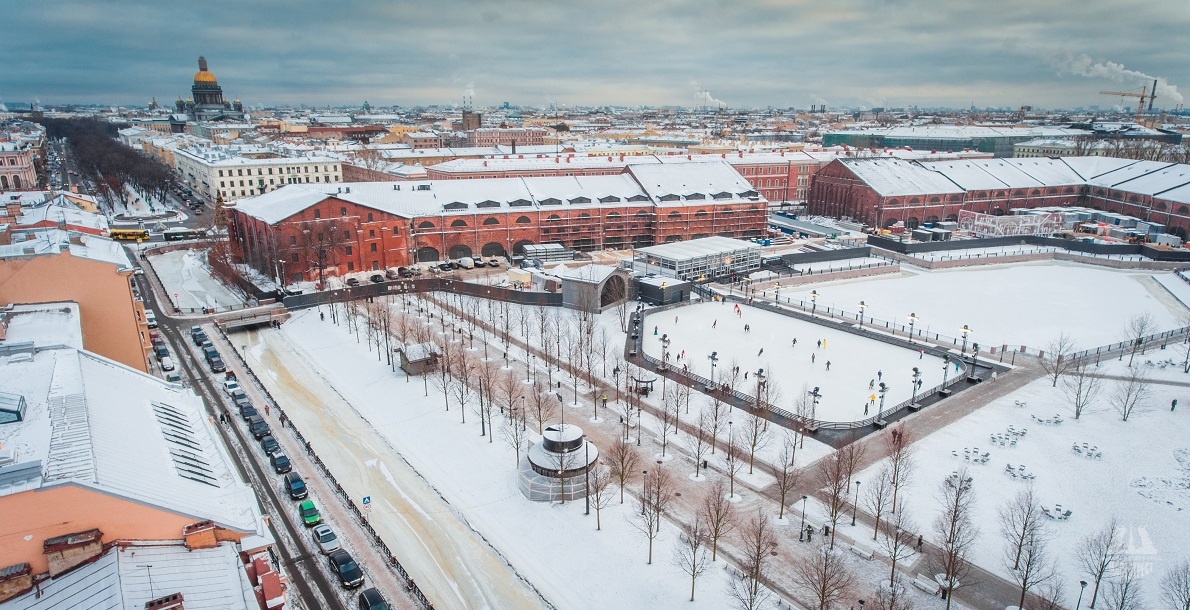 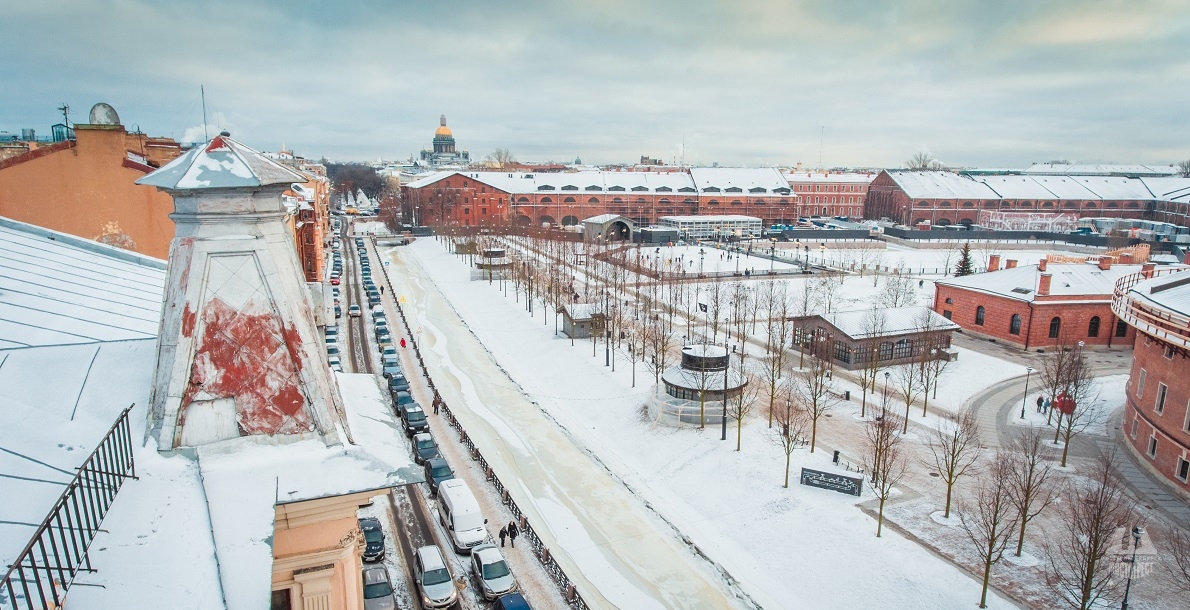 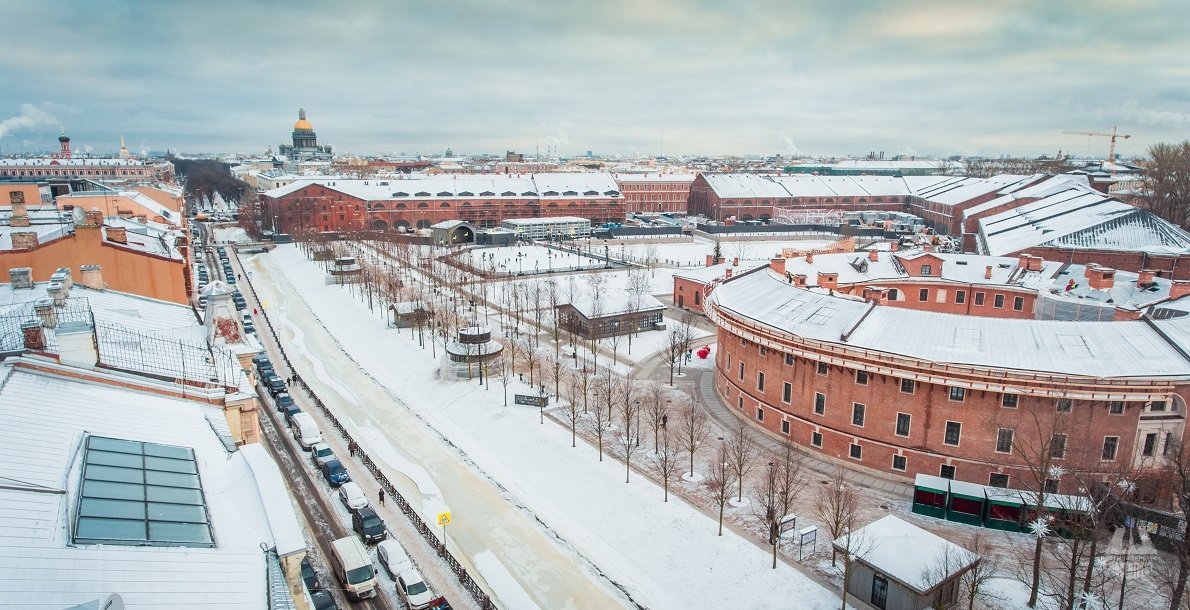 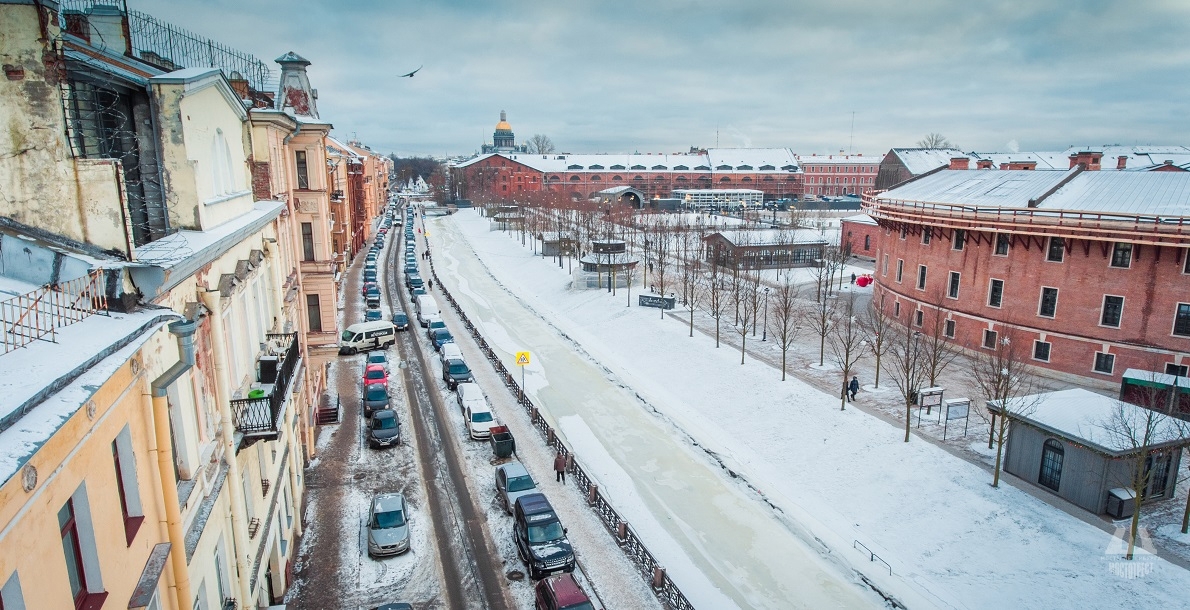 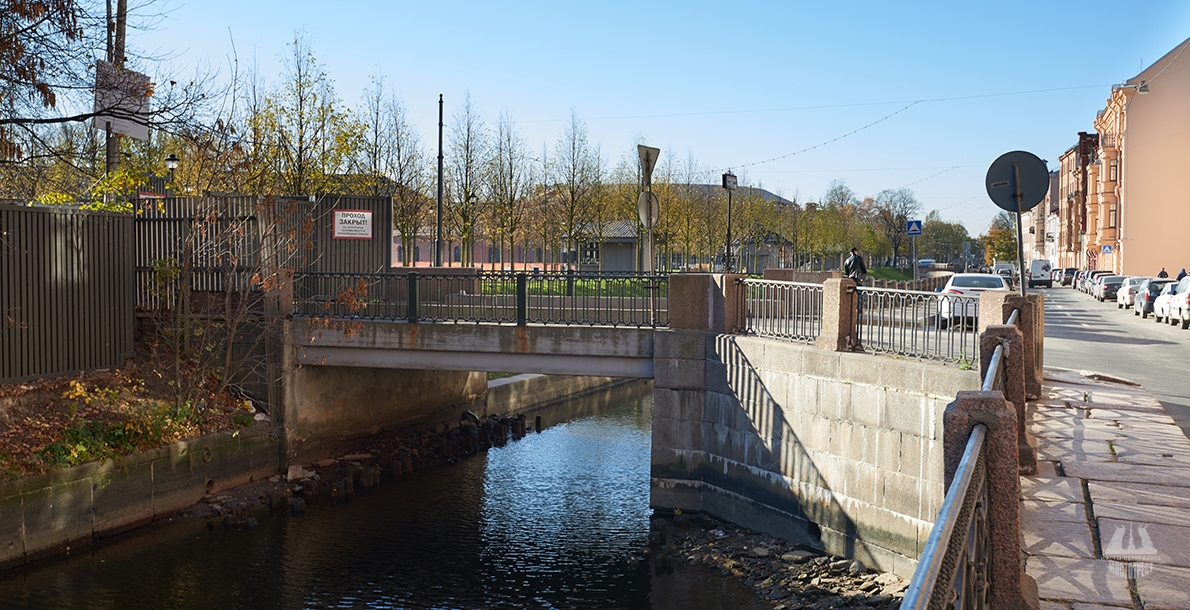 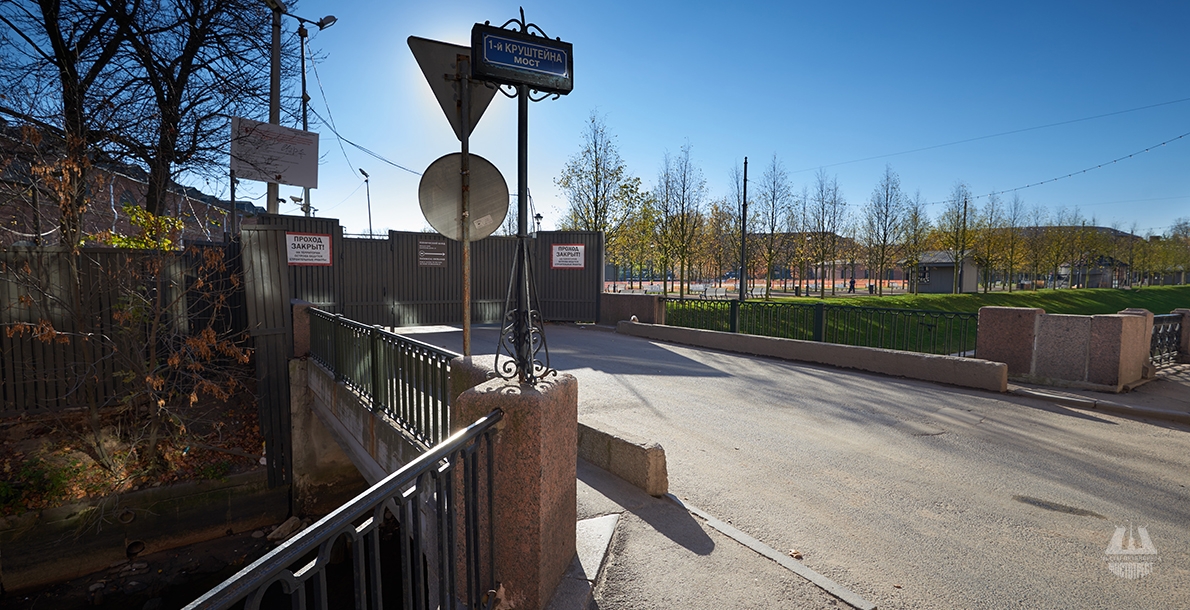 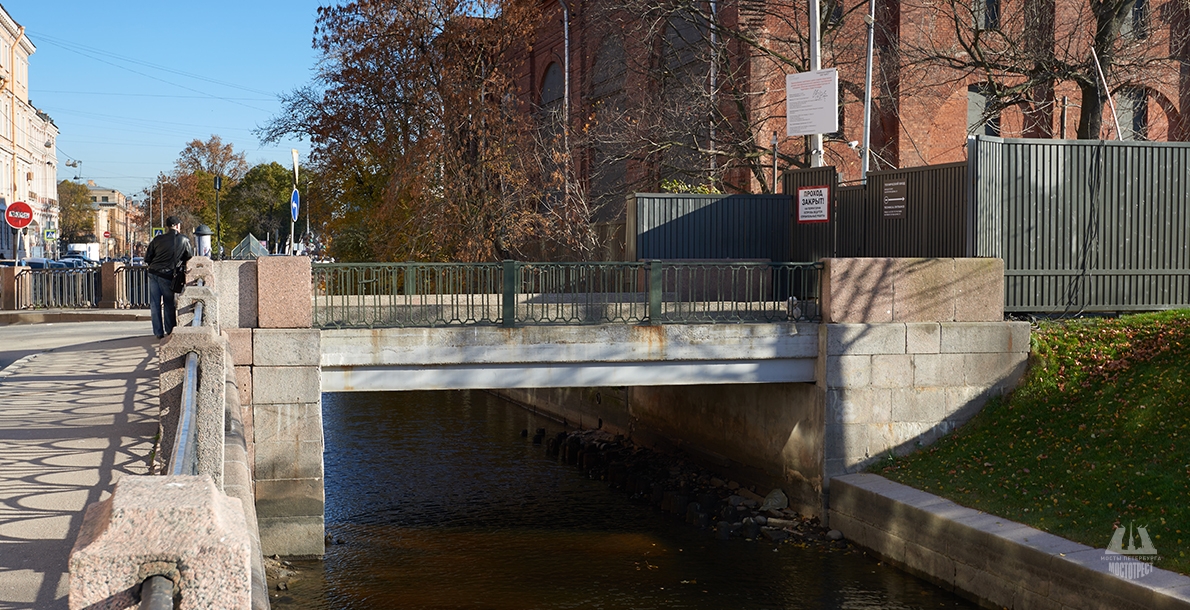 In 1721 Peter the Great named a small island located on the south and washed by the Moika River, from the east – by the Kryukov Canal, and from the north – by the Glukhoy Protok (the Dead Canal) – as New Holland. Timber depots were placed on this island in the past. In 1717 for transportation of timber and other materials for the shipbuilding needs from New Holland Island, Admiralty and Galernaya shipyard were joined by canal named the Admiralty Canal. The canal was cut from the walls of the Admiralty on the territory of current Dekabristov Square and then near the Rope-house building to Galernaya shipyard. Initially, there existed a wooden bridge at the entrance of New Holland Island.

In 1765-1780 the architectural ensemble of New Holland was created by architects Chevakinsky and Vallin de la Mothe. The entrance to it was through two horse-drawn bridges over the canal.

In 1842 the Admiralty Canal was put in a tube, and Konnogvardeysky Boulevard was arranged at the place of the canal.

In the same year, in connection with the construction of the first permanent Blagoveschensky (Annunciation) Bridge across the Neva River, there was a question whether to put part of the Kryukov Canal in tube located under the entrance to the bridge at the site of the Glukhoy Protok to the Neva River.

In 1922 Glukhoy Protok at the site from Truda Square to Novo-Admiralty Canal was named the Krushteyn Canal in honour of a military sailor, Commissioner of Chief Maritime Administration. Currently the historical name the Admiralty Canal was returned to it

In 1939 the wooden bridge was rebuilt in a single-span metal simple bridge. The superstructure represents metal I-beams. Lower chords of central beams were reinforced by metal plates. The bridge abutments are concrete ones on pile foundation, and faced with granite.

Metal welded railings of a simple pattern are installed on the bridge.

In 1998-2000 the repair of the bridge was carried out: metal beams of the span structure affected by corrosion were replaced, the superstructure was renewed with waterproofing.

Karl Yakovlevich Krushtein after whom the bridge was named is Estonian, a member of the Bolshevik Party since March 1917. In February 1918, when the Kaiser's troops occupied Estonia, a military sailor Krushtein left Tallinn and went to Kronstadt. On behalf of the Chief Commissioner of the Baltic Fleet I.P. Flerovsky he formed and sent to the armed forces of Baltic Fleet sailors. He died at the hands of a socialist-revolutionary on November 3, 1921 . And was buried in the park at Nikolskaya Square.