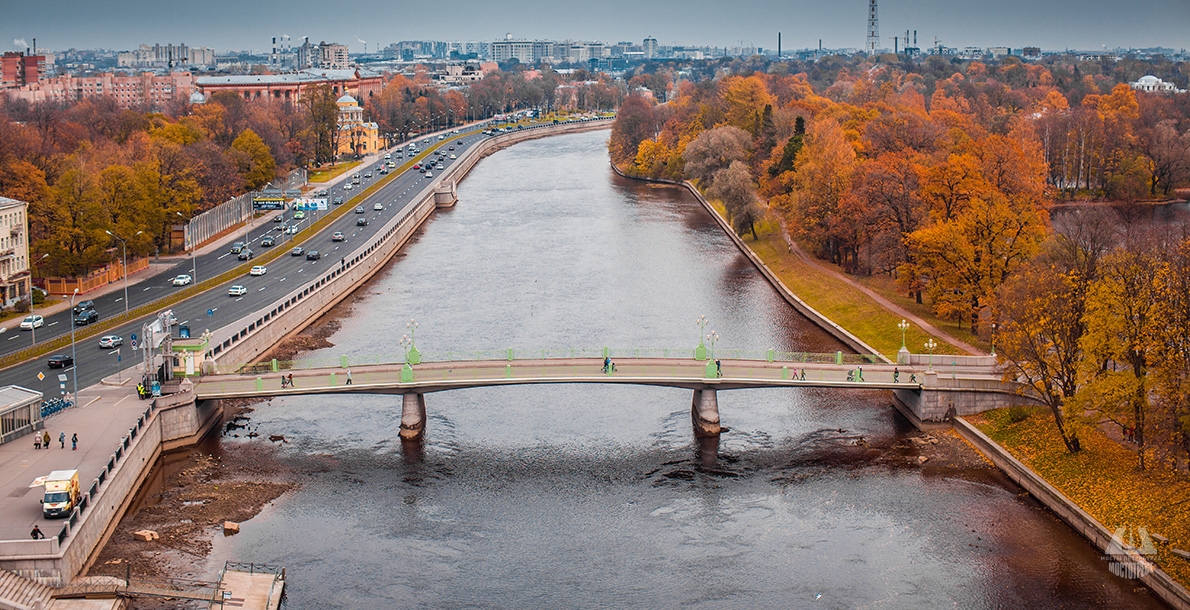 The 3rd Yelagin Bridge is located across the Bolshaya Nevka River. This is the main entrance to Central Recreation and Leisure Park on Yelagin Island.

In 1826 a floating bridge was built there and in 1840 it was rebuilt into permanent 9-span wooden strut-framed bridge with a central draw span. It was a twin-leaf bascule bridge consisted of four wooden frames. The bridge was raised with use of manual winches.

In 1949-1951 the bridge was reconstructed under the project of engineers V.V.Demchenko and V.V.Blazhevich of Dormostproekt, and as a result the bridge became a 8-span one with a central draw span.

The permanent spans are metal welded ones of girder-cutting system. In cross-section its constant superstructure consists of eight main I-beams tied in pairs.
The bridge abutments are concrete ones and based on earth foundation. The intermediate tower supports on the timber pile foundation with rigid metal grillage and metal frame rigging.

According to the project, the roadway coating of fixed spans was asphaltic concrete one on timber slabs, and on draw span there was the timber decking.

Weld metal railing of a simple pattern was installed on the bridge by the type of railing on the 1st and the 2nd Yelagin Bridges.

In 1976 major repair of the bridge took place. Timber slabs on the roadway and sidewalks on fixed spans were replaced by concrete slabs included in the operation of main beams; asphalt concrete pavement was restored. The timber decking of the draw span and the support sheeting were repaired.

In 1982 the major repair of mechanisms and electrical devices was performed.

In 1999 metal protective pile groups of the bridge supports were installed.

In 2008 the bridge was demolished, and in 2009 new metal 3-span fixed bridge was built at the place.

The 3rd Yelagin Bridge is a popular place for fishermen of the Northern Capital. They catch chub there using the donkey with bait of melted cheese. And at night in the mouth of the Bolshaya Nevka River they catch silver bream, rudd, ide and bream.