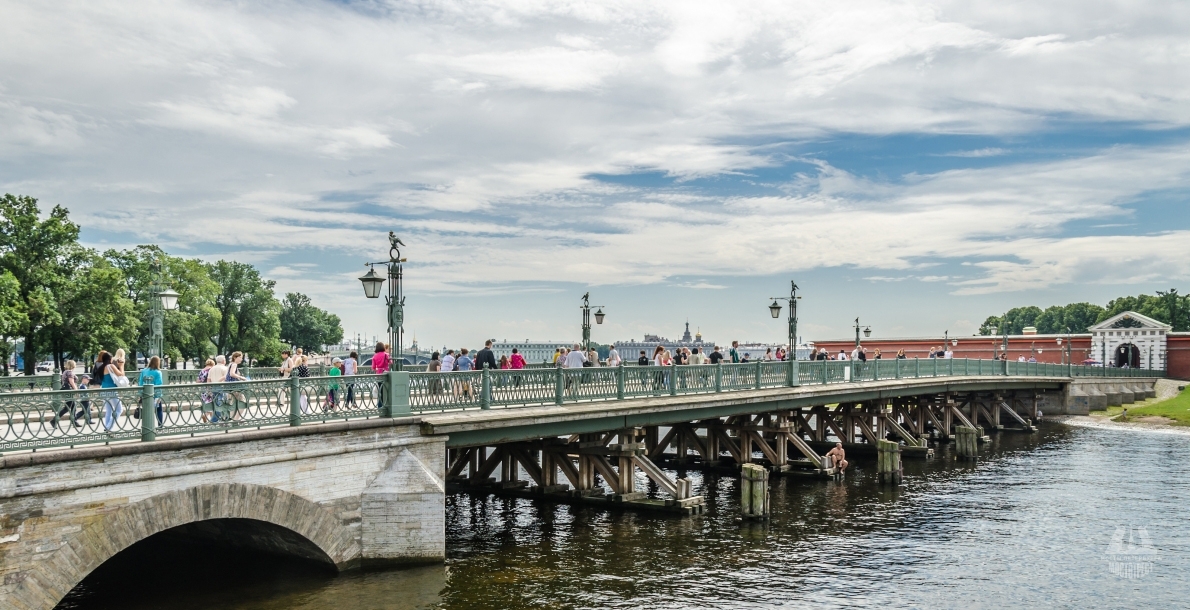 Ioannovsky Bridge connects Ioannovskiye Gate of the Peter-and-Paul Fortress with Petrograd Side. This is the first-ever bridge in Saint Petersburg.

In 1703 a floating wooden bridge connected the fortress on Zayachy Island with buildings on Beryozovy (now Petrogradsky) Island.

In 1706 a floating bridge was replaced by a wooden one on pile supports with a central lifting part. The bridge derived its name from Petrovsky Bridge.

In 1738 it was rebuilt into 16-span one while maintaining the lifting span.

In 1801-1802 the wooden part of bridge was replaced by 8-span truss structure system with single leaf lifting part. The bridge span was opened by manual winches. A granite parapet was installed on stone arcades.

In 1827 the arch spans of the right leaf of the bridge were filled up in connection with the improvement of entries on Suvorovsky floating bridge across the Neva River (the name originally was supposed to be given to the present Troitsky Bridge built on the site of the floating one). Due to soil sediment arch spans of the left leaf of the bridge were gradually liquidated.

By 1934 only one stone arch span has survived on the right leaf of the bridge, and on the left leaf three ones together with the dam adjacent to Ioannovsky gate of the fortress. Then all arched stone spans were filled up and faced by rubble plates.

In 1950-1951 at the next repair of the bridge under the project of engineer P.V. Blazhevich seven spans were covered by metal beams. The supports were repaired and lined with boards. The roadway and sidewalks were covered with timber deck. The railings were wooden ones.

In 1953 under the project of architect A.L. Rotach wooden railings were replaced by art casting iron railings, lamps with lanterns were mounted which were at the entrance to Suvorovsky floating bridge. The type of the railings was taken from the ones on the entrances of Tuchkov Bridge.

On May 7, 2003 on the pile next to the bridge a sculpture of hare was installed. Its non-official name is “The Hare Escaping Flooding”.

The repair should be completed to the end of 2016. The road on top of arcades with cobbled paving and granite sidewalks was repaired; waterproofing, wood river bed supports, metal structures and other parts were renewed.