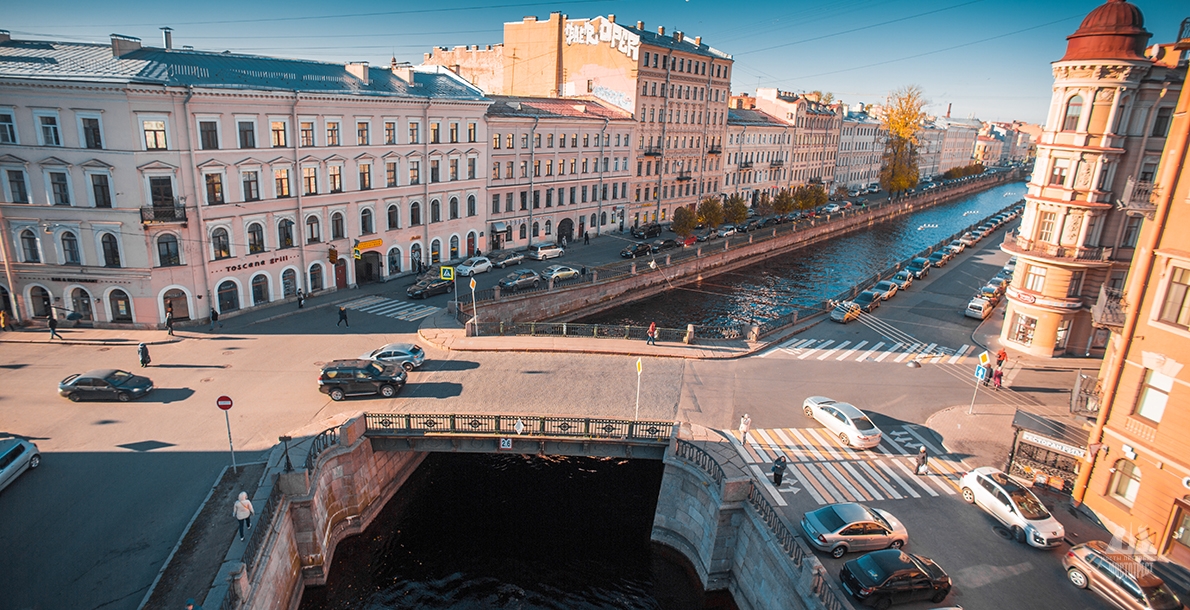 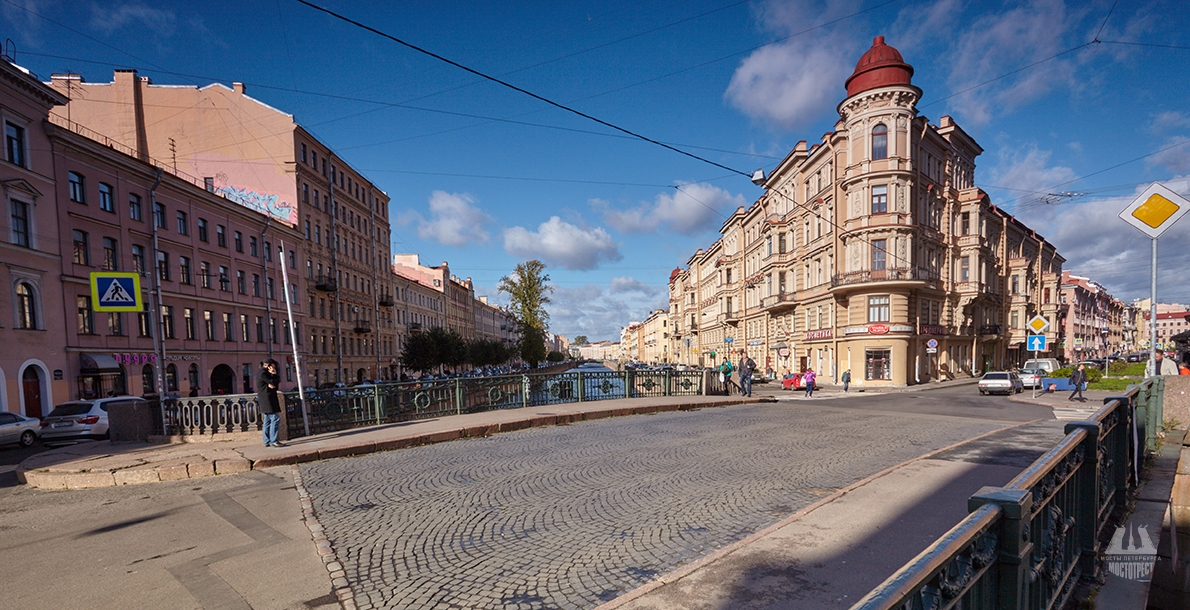 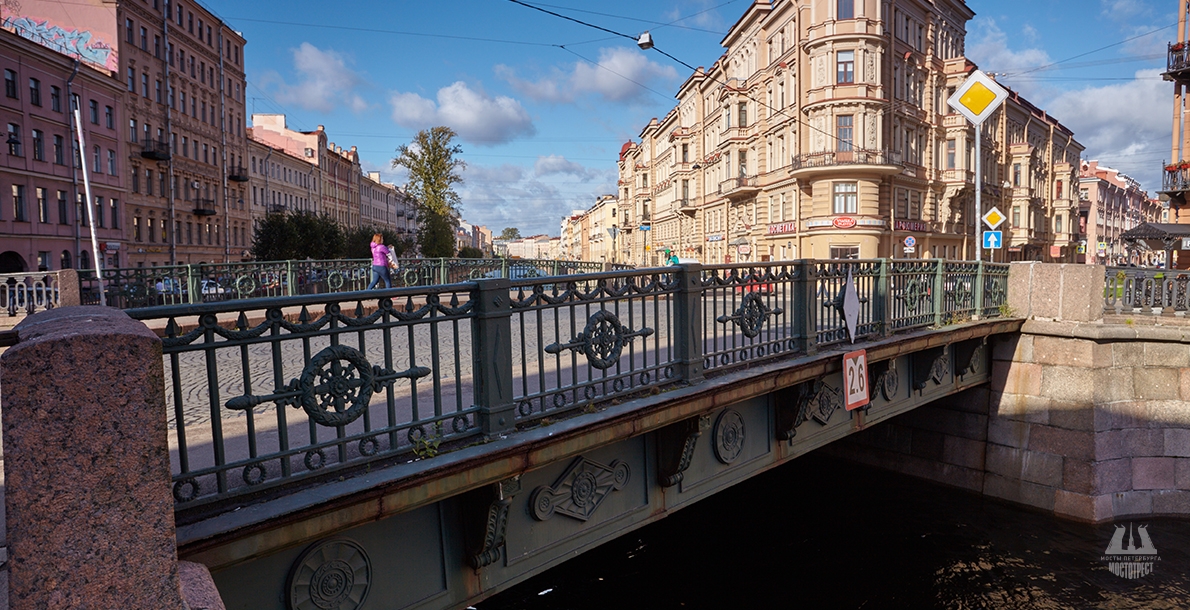 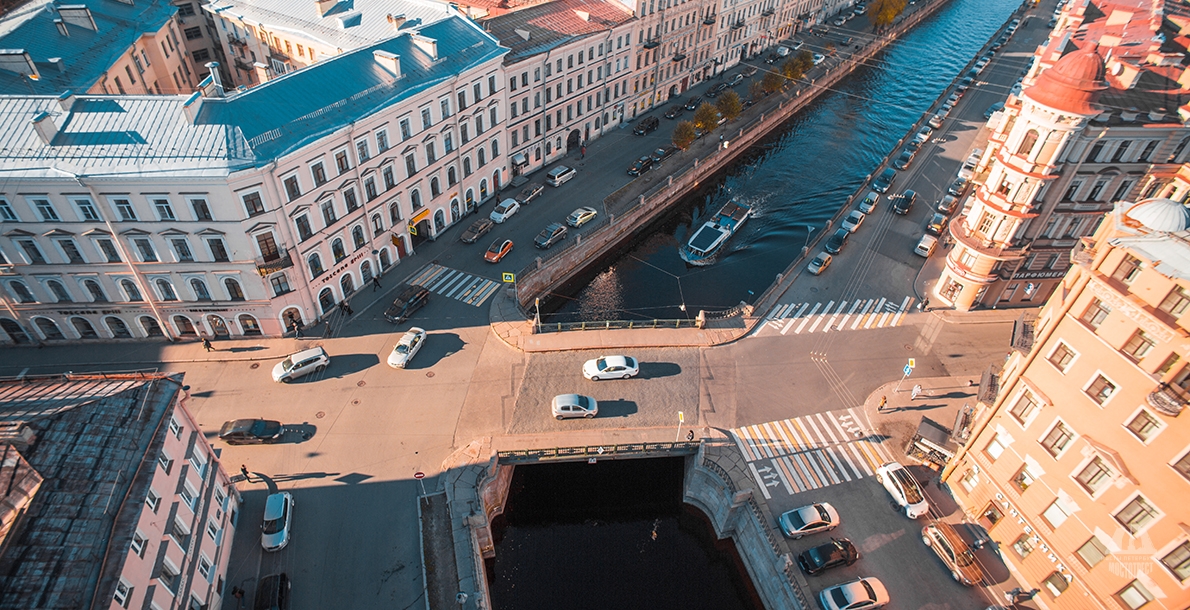 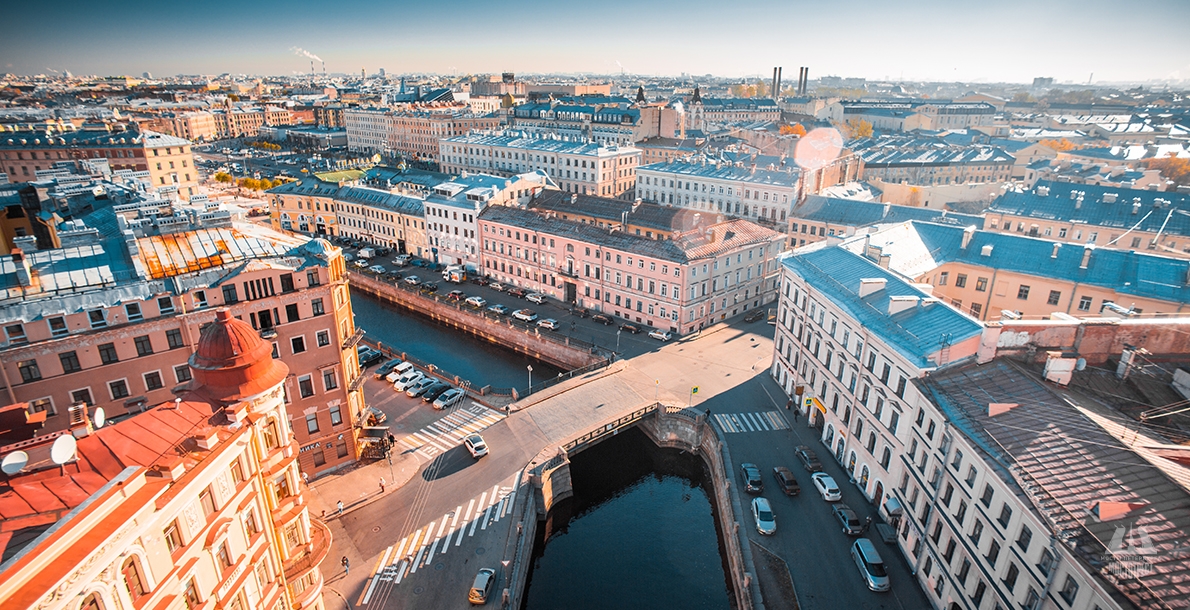 Opened in: the end of the XVIII century

The bridge and the lane derived their names after the tavern which in the middle of the XVIII century was located on the corner of the lane and Sadovaya Street, and belonged to a merchant Kokushkin.

At the end of the XVIII century, during the construction of retaining walls of the Griboyedov Canal embankments, Kokushkin bridge was originally built as a wooden one as well as the most bridges across Griboyedov Canal. In 1840 it was a single-span crossing on stone abutment faced with granite with a wooden beam span.

In 1946, under the project of engineer B.B. Levin, the bridge was rebuilt in a single-span metal simple bridge with reinforced concrete slab of the roadway. The coating on the roadway - diabase paving, sidewalks - gritty asphalt, and abutments - granite slabs. The old supports were completely dismantled, and in the foundation it was driven by 170 new timber piles with a diameter of 26 cm. The bridge has massive rock abutments on pile foundation, faced with granite. The superstructure consists of 8 welded I-beams. In their upper zones 14 cm thickness concrete slab is laid.

The superstructure facades are decorated with metal plates attached to it by cast fragments. An art casting iron railing with cast iron bollards is installed on the bridge The sidewalk is separated from the roadway with granite curb.

This crossing is repeatedly mentioned in the literature - for example, in the works of Fyodor Dostoevsky and Nikolay Gogol. In 1829 Pushkin mentioned Kokushkin Bridge in the famous epigram on the drawing of A.V. Notbek "Pushkin and Onegin":

Here, after crossing Bridge Kokushkin,
With bottom on the granite propped,
Stands Aleksandr Sergeich Pushkin;
Near M'sieur Onegin he has stopped

The fact that the bridge attracts thoughts of many literary figures seems even mystical. Confirmation of this view comes from the Honoured Geologist of Russia, the candidate of geological-mineralogical sciences E.K.Melnikov, who claims that under the ground of St. Petersburg there are at least 25 geo-active zones negatively affecting the health, behaviour and human creative energy with long-term stay in this zone. One of these zones is located on Sennaya Square.

Geological fault goes from the square to the Griboyedov Canal and continues along it to Voznesensky Prospect. Then, turning to Voznesensky Prospect, the fault goes to Decembrists Street, and then goes back to Sennaya Square, thus forming a kind of "Bermuda Triangle" of St. Petersburg. It entirely locates a heritage protection area, the so called Dostoevsky area, and therefore Kokushkin Bridge and Stolyarny Pereulok Lane. 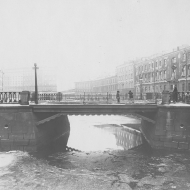