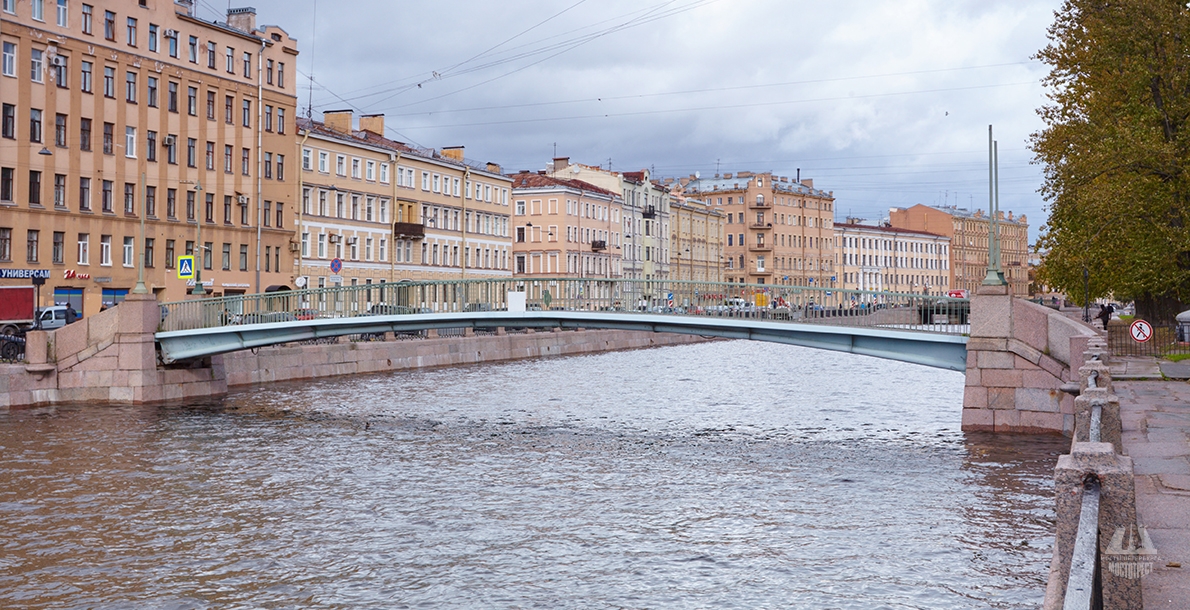 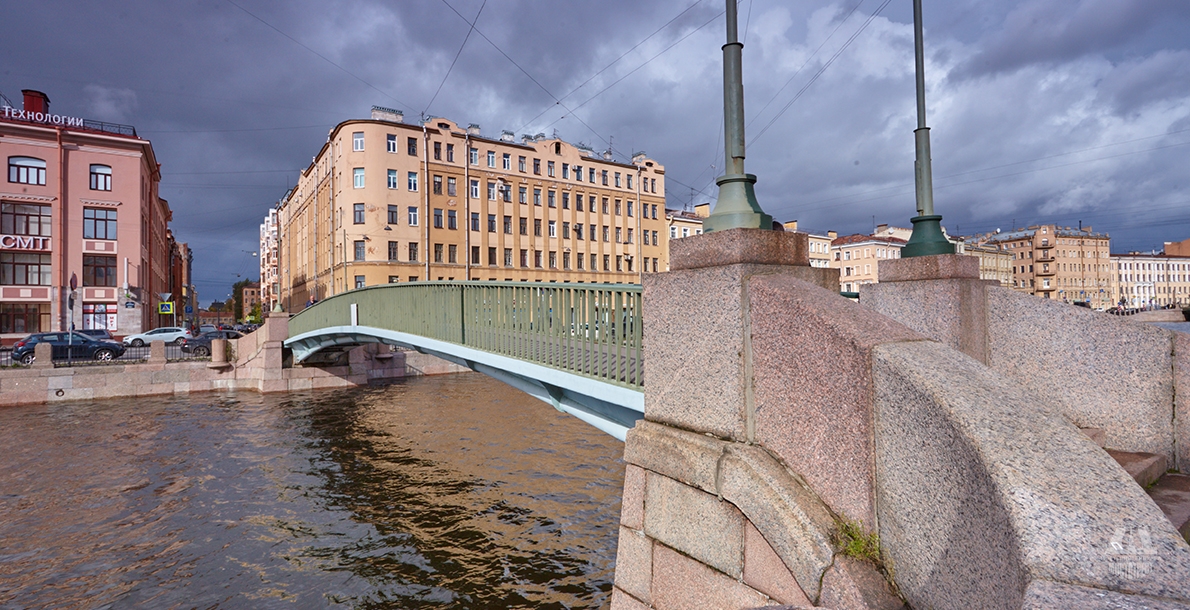 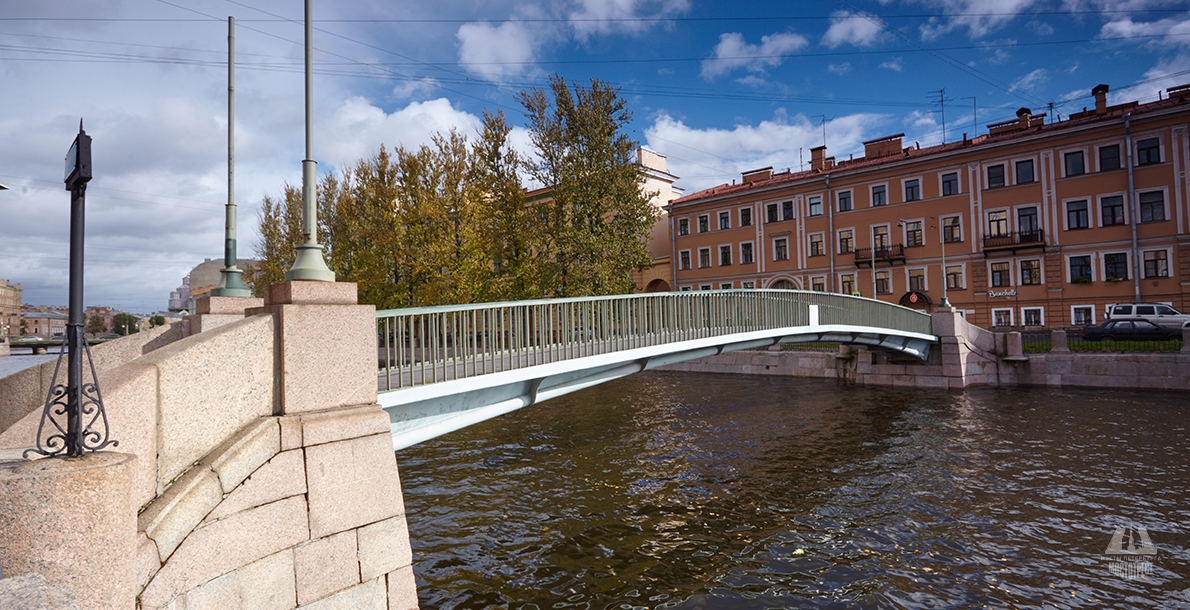 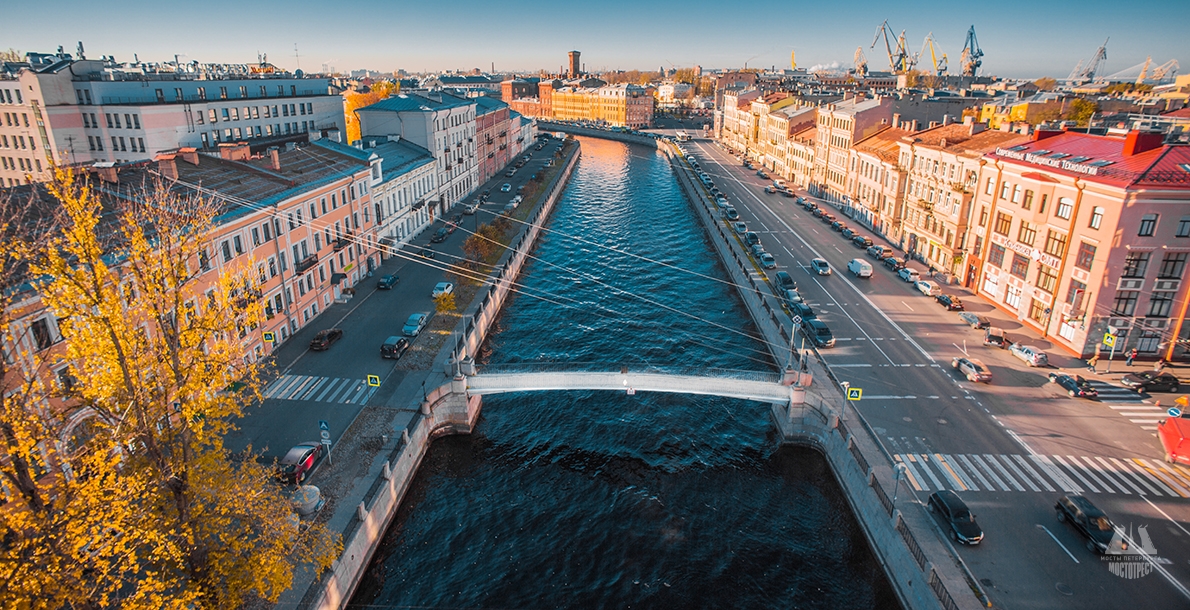 Kolomensky Bridge is a pedestrian bridge across Griboyedov Canal in Admiralty District of St. Petersburg, connects Kolomensky Island and Pokrovsky Island. This is the first and the only aluminum bridge in the city.

Kolomensky Bridge was the first wooden bridge over the Griboyedov Canal. It was built in 1906. It was an unassertive pedestrian crossing which had no architectural design, but it was necessary for the connection of Kolomensky Island and Pokrovsky Island. It was three-span wooden beam bridge. The bridge length was 34.3 m, and the width - 2.3 m. The wooden bridge was repaired several times. The bridge derived its name from Kolomna - the ancient name of the district of St. Petersburg, and survived to this day most of the terraced houses of the XIX century.

In 1967, on the initiative of Professor V.I. Kryzhanovsky, in the department of metal structures of Leningrad Construction and Engineering Institute, a conceptual design of welded aluminum bridge of trusses of three-dimensional system - the first in the Soviet Union - was developed. In some sources you can read that Kolomensky Bridge was the first bridge in the world made of aluminum, but it is not true. In 1948-1950s 150-meter aluminum road bridge was built in the Canadian city of Arvida in northern Quebec.

The superstructure is an original two-hinged arch system of two pipes and connecting members providing the necessary rigidity and strength. The bridge abutments are concrete ones on pile foundation, and faced with granite. There is a pedestrian railing in the form of metal grating of a simple pattern without bollards. The bridge entrances are decorated with granite five-stage descends fenced with granite parapets. Lighting posts are metal, tubular ones, mounted on a granite pedestals with single lamps.

There is an asphaltic concrete pavement on corrugated slabs. This is the first and only all-welded aluminum bridge. Aluminum superstructures were welded on Zhdanov Shipyard (now Severnaya Verf); they were completely transported and installed on site.

This single-span bridge has retained its almost original appearance to this day; only the form of lamps has changed. Its granite stairs of baroque shape and light almost aerial design seamlessly blend into the architectural landscape of Kolomna. You’ll never think that this bridge is not yet more than half a century.

In those years, when the new bridge was built, quarters in the area where it was located (Repin Square and Lomonosov Square) were very densely populated; and the life of this area was quite fast moving.

Now, as a result of rehousing people from of communal apartment, life activity, as well as the functionality of Kolomensky Bridge, has declined. But the bridge is as before a historical and architectural landmark of St. Petersburg. 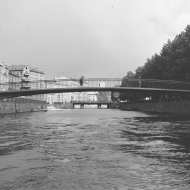 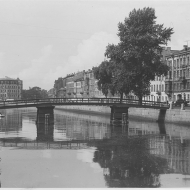 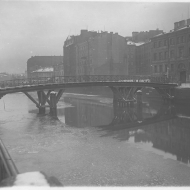