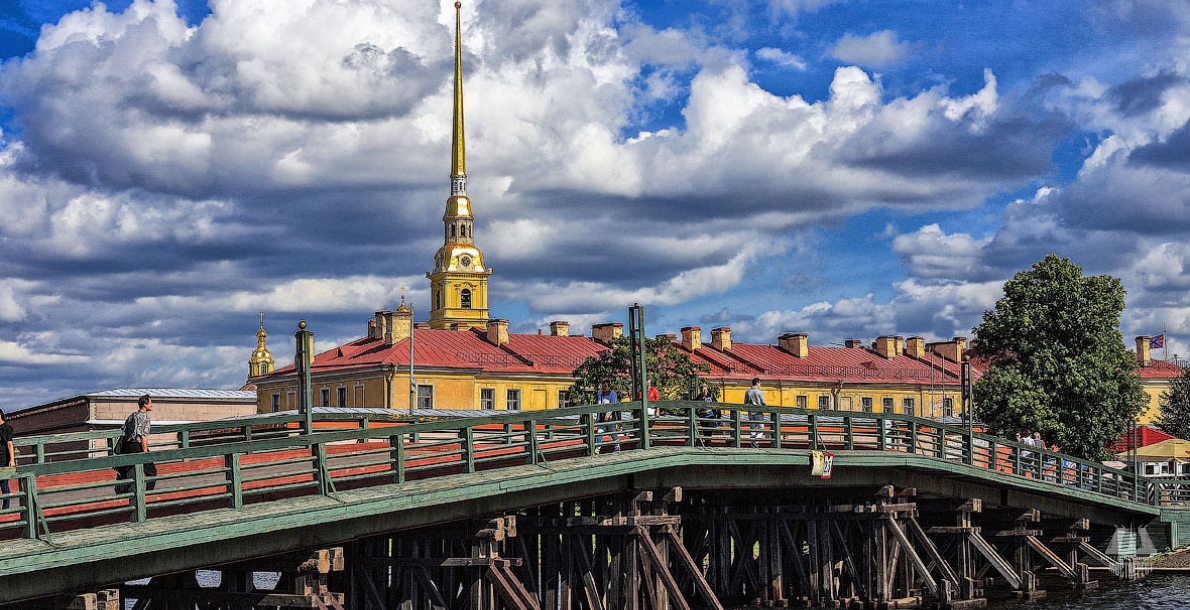 Kronverksky Bridge spans two banks of the Kronverksky Strait in Petrogradsky District of St. Petersburg; it connects Zayachy Island and Petrogradsky Island and located from the side of Mytninskaya Embankment at the entrance of the Peter-and-Paul Fortress. The bridge was built in 1938 under the project of railway engineer P.P. Stepnov.

The necessity of the bridge construction was connected with the improvement of the territory along the Kronversky Strait and part of Mytninskaya Embankment. In the 1930s the Garden of Gosnardom (former People's House) and "American mountains" were located there, which burnt during the bombing of Leningrad in autumn 1941. The bridge was required also for the traffic of cars and pedestrians to the territory of the Peter-and-Paul Fortress.

The bridge was a wooden one with nine-span simple structure. The superstructure was wooden one, and the central span was covered with a metal beam. The abutments and intermediate supports were wooden piles. The bridge length was 57.5 meters, its width was 8.8 meters. Wooden fencing was installed on the bridge made of posts and strengthening lines. The wooden bridge was repaired several times.

In 1976 due to the poor technical condition of the bridge its load capacity was limited to six tons.

In 1977 major repair of the bridge took place. The bridge remained a single-span simple one. The wooden superstructure of the crossing was replaced by metal one on which cross beams and wooden decking were laid. Wooden railings were installed on the bridge. The wooden abutments and supports were repaired. The bridge was repaired by the efforts of Lenmosttrest Specialized Installation and Maintenance Directorate.

According to the Decree of the Russian Federation Government No. 527 dd. 10.07.2001 Kronverksky Bridge is an object of historical and cultural heritage of federal importance.