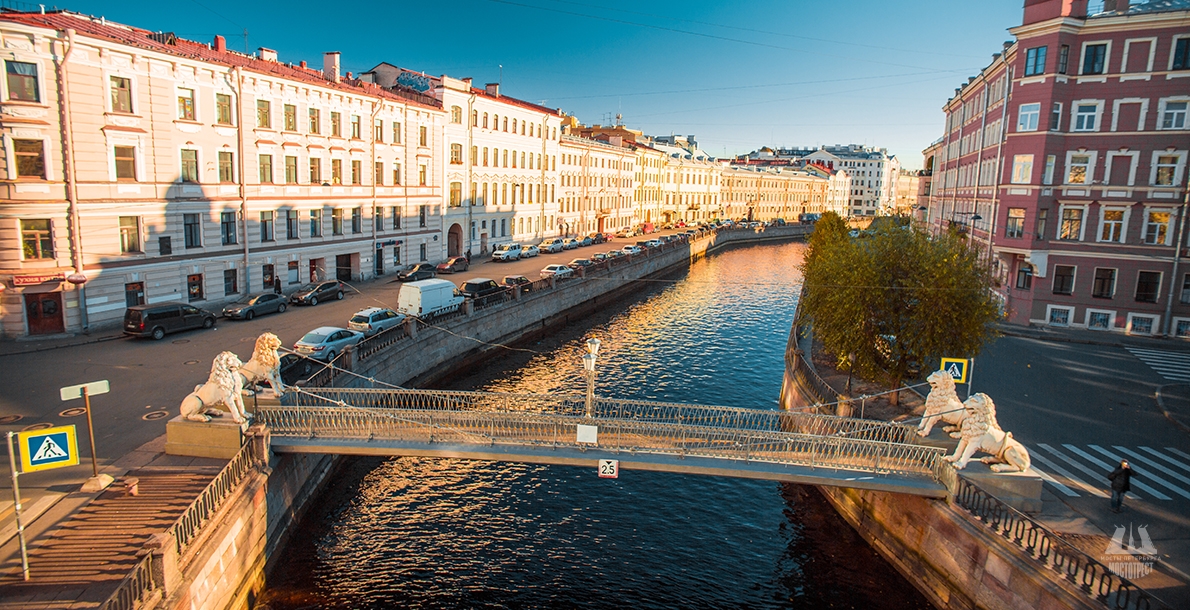 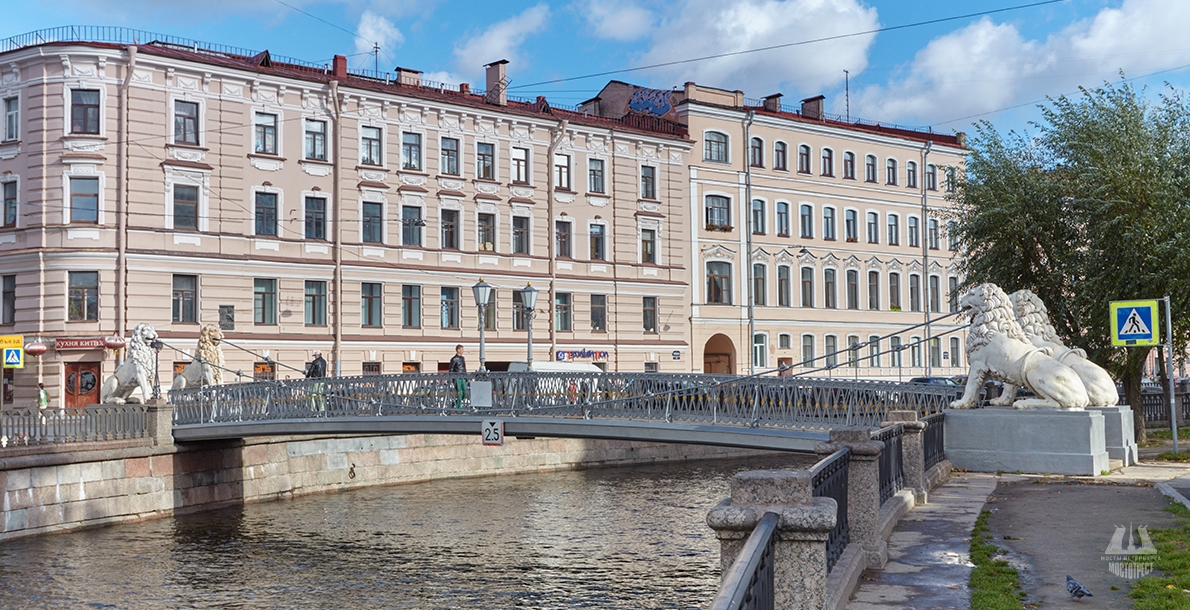 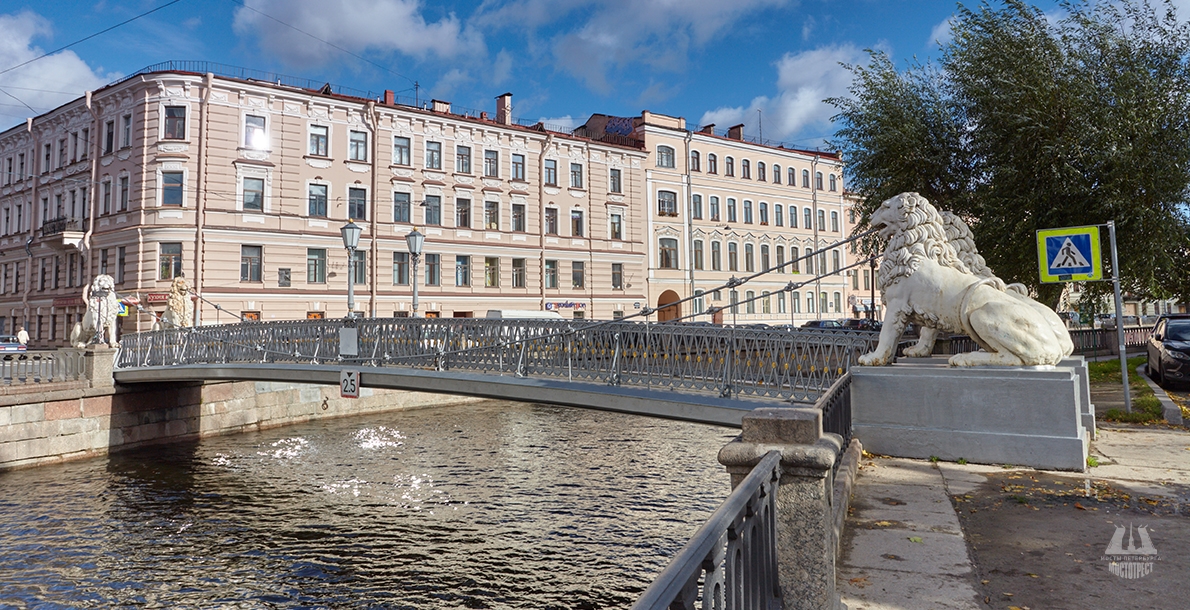 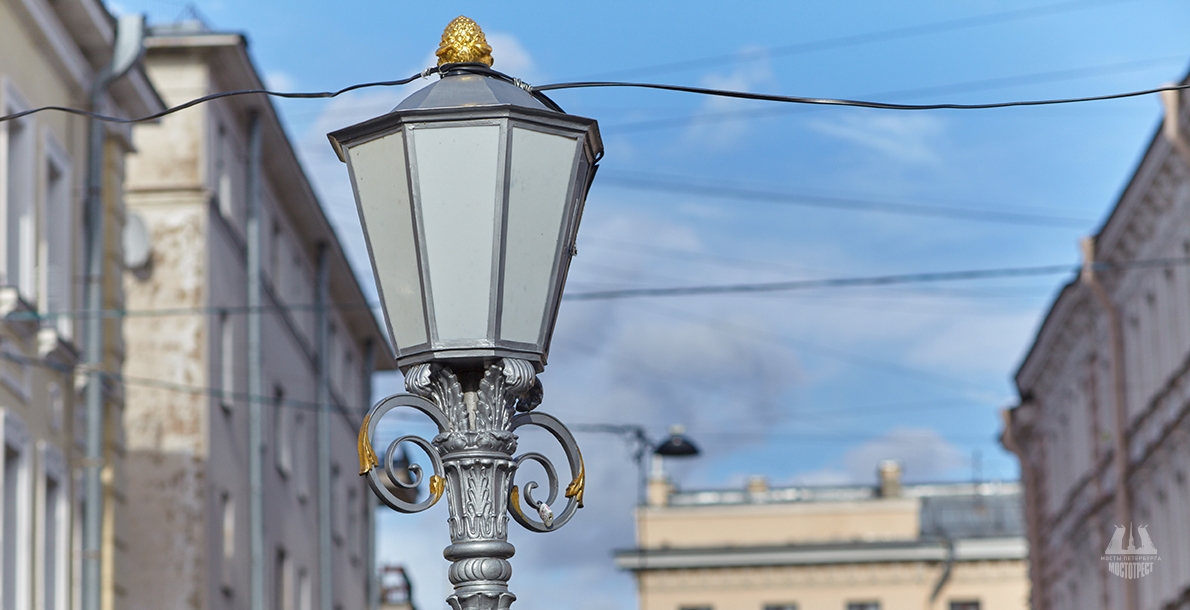 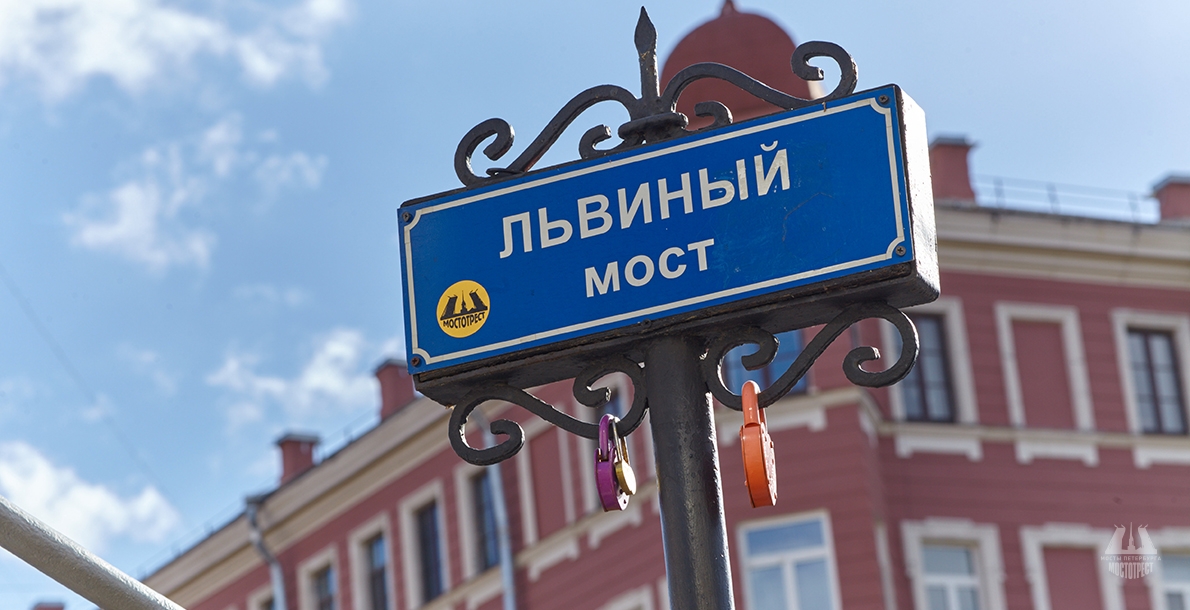 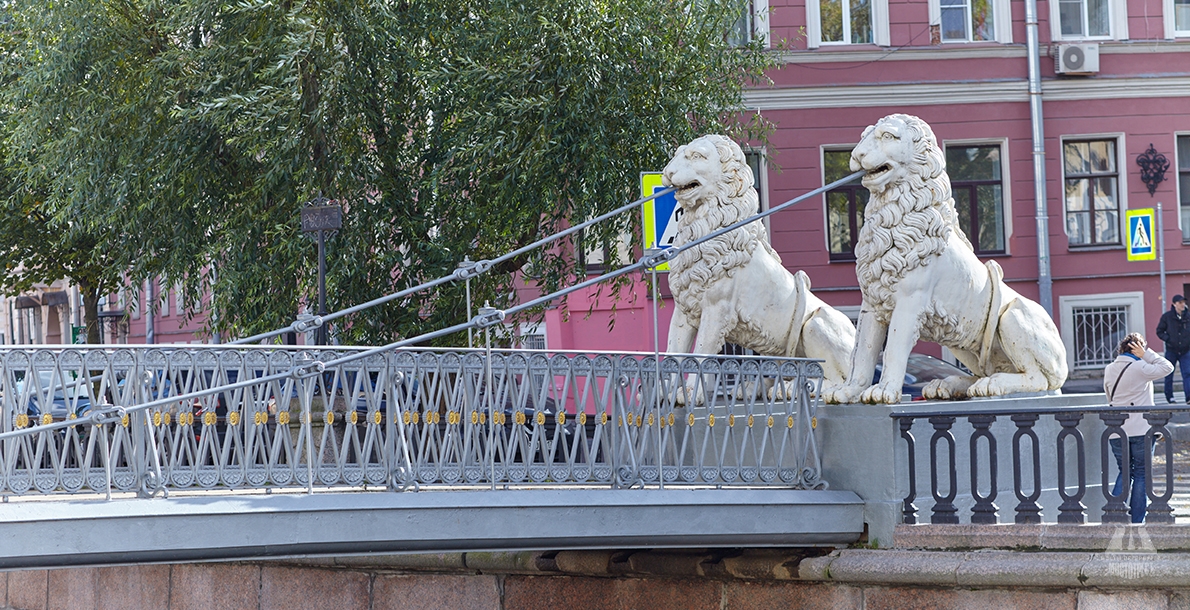 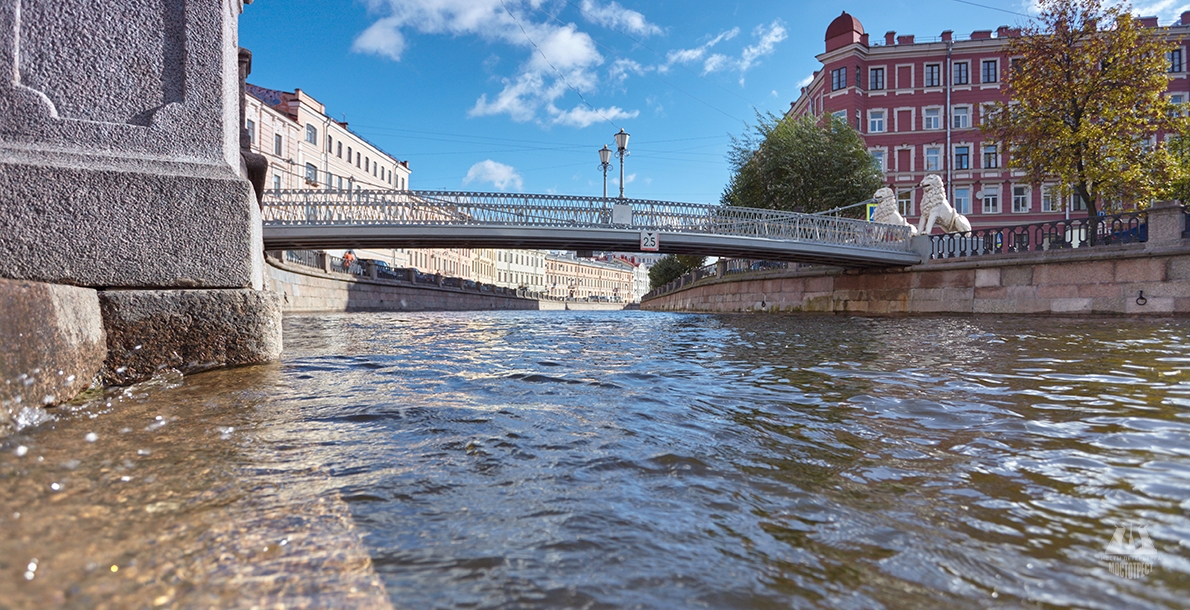 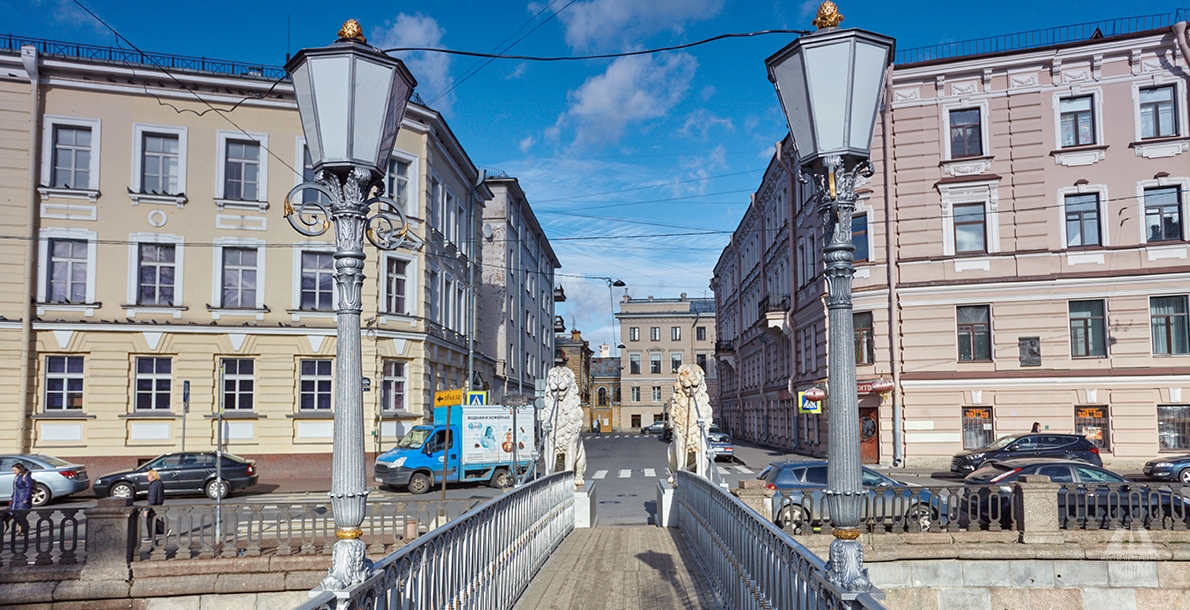 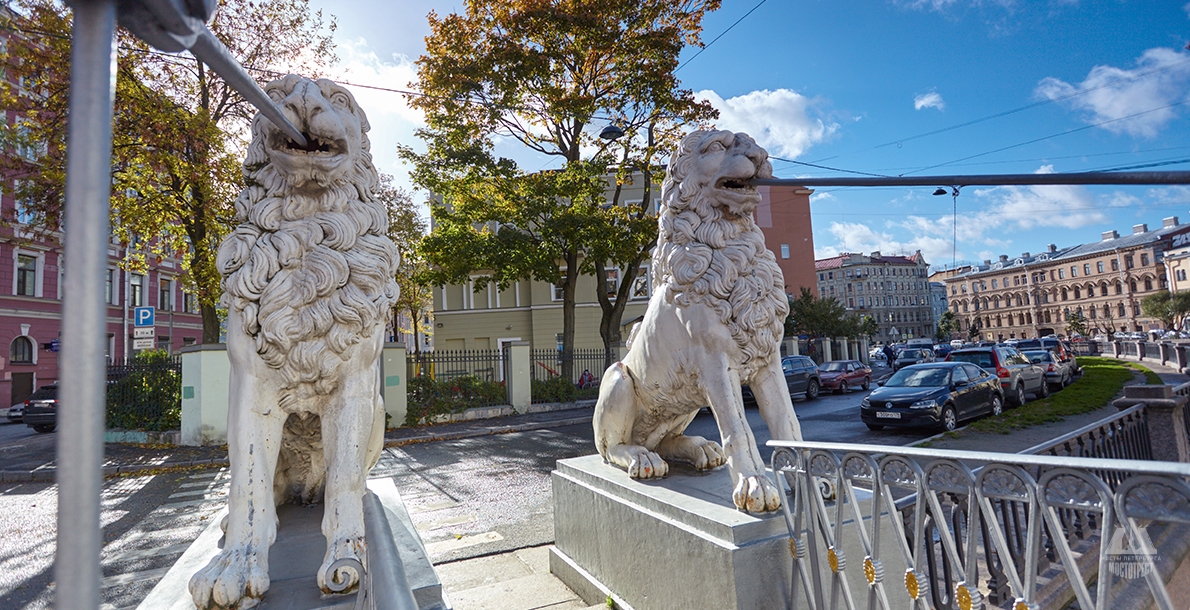 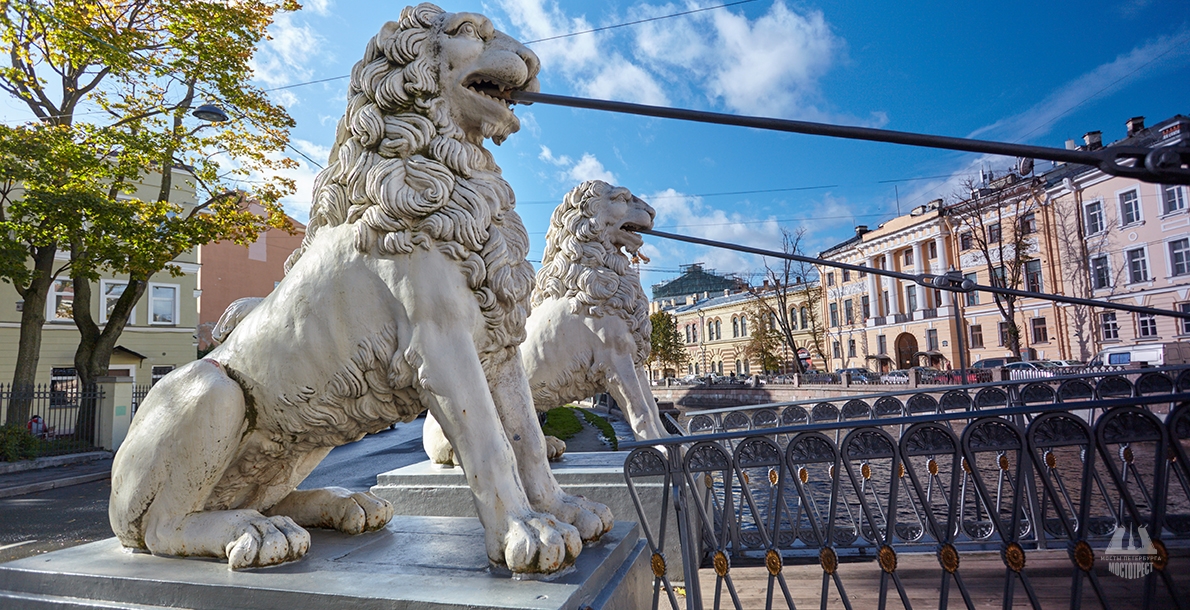 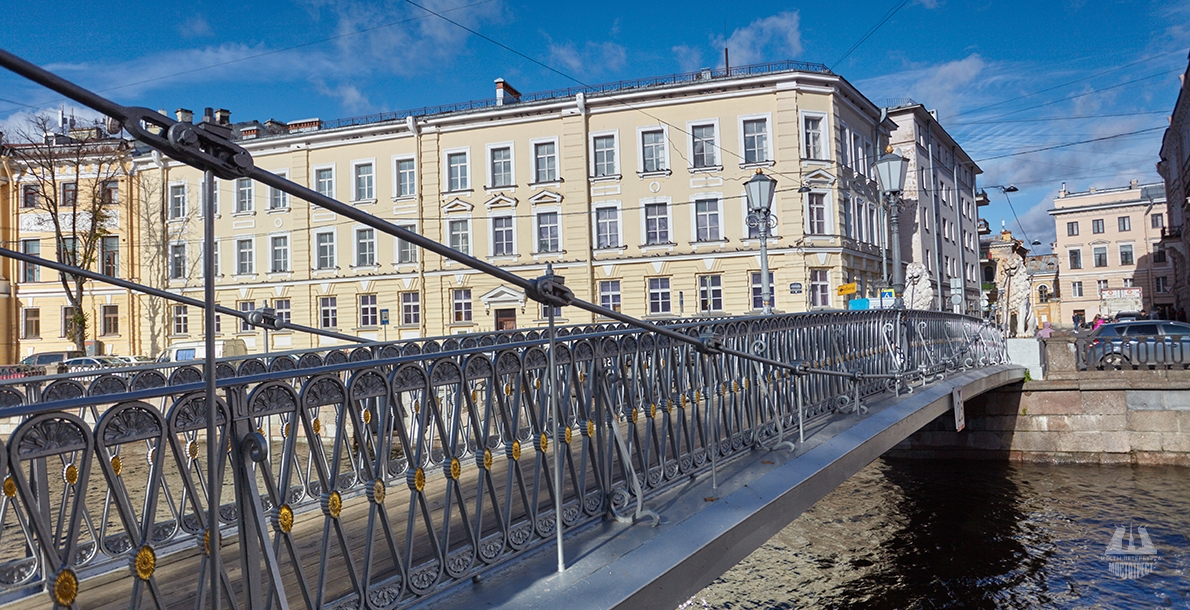 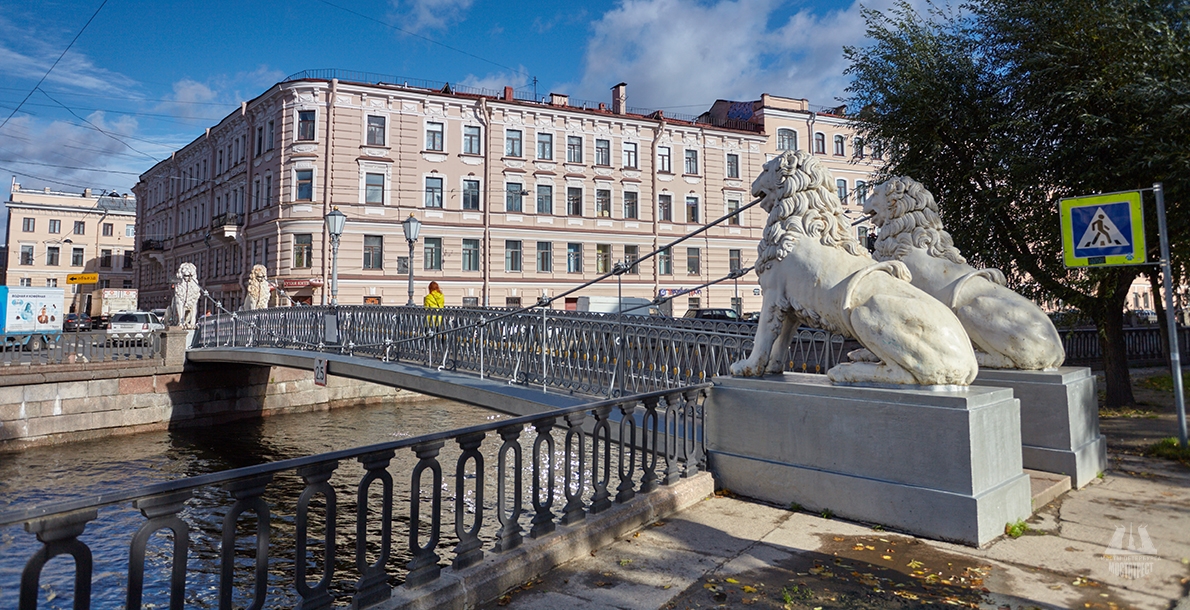 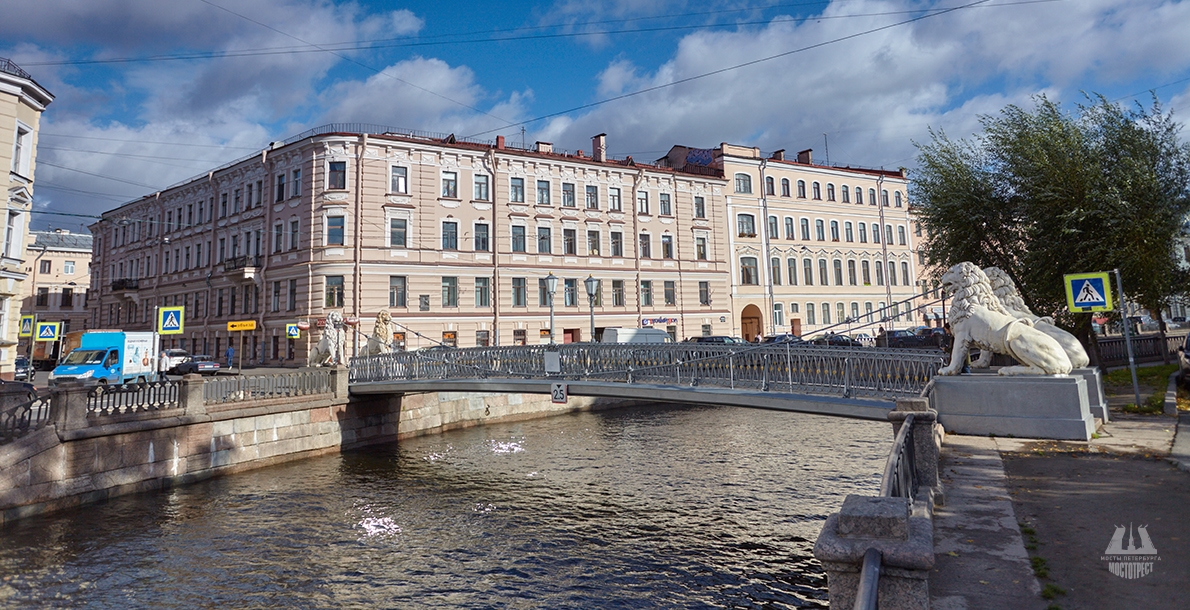 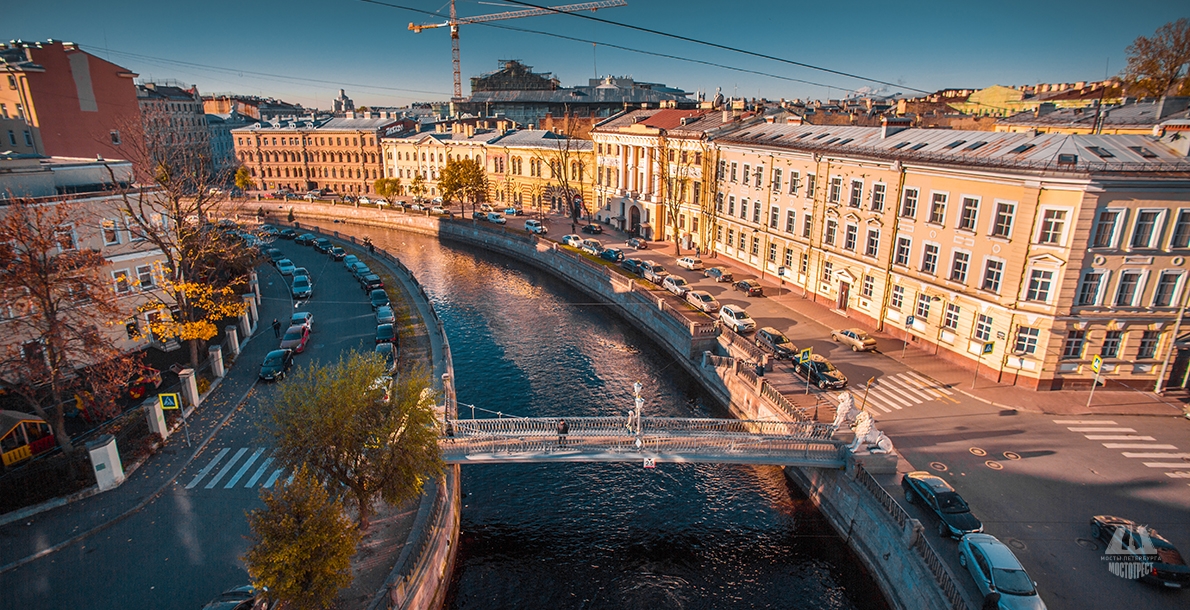 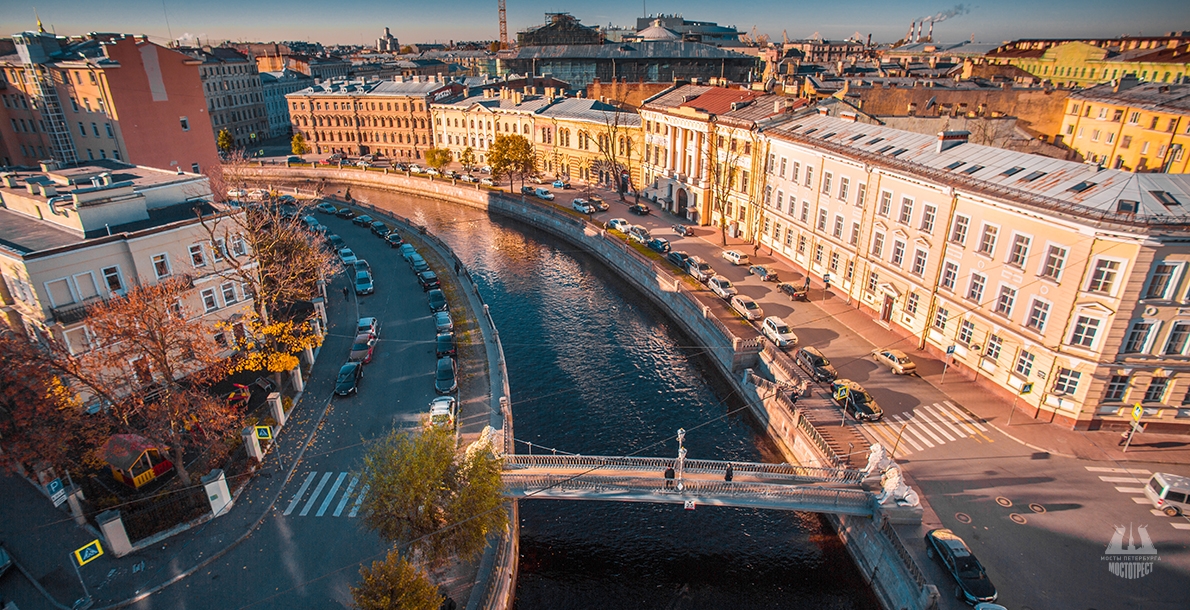 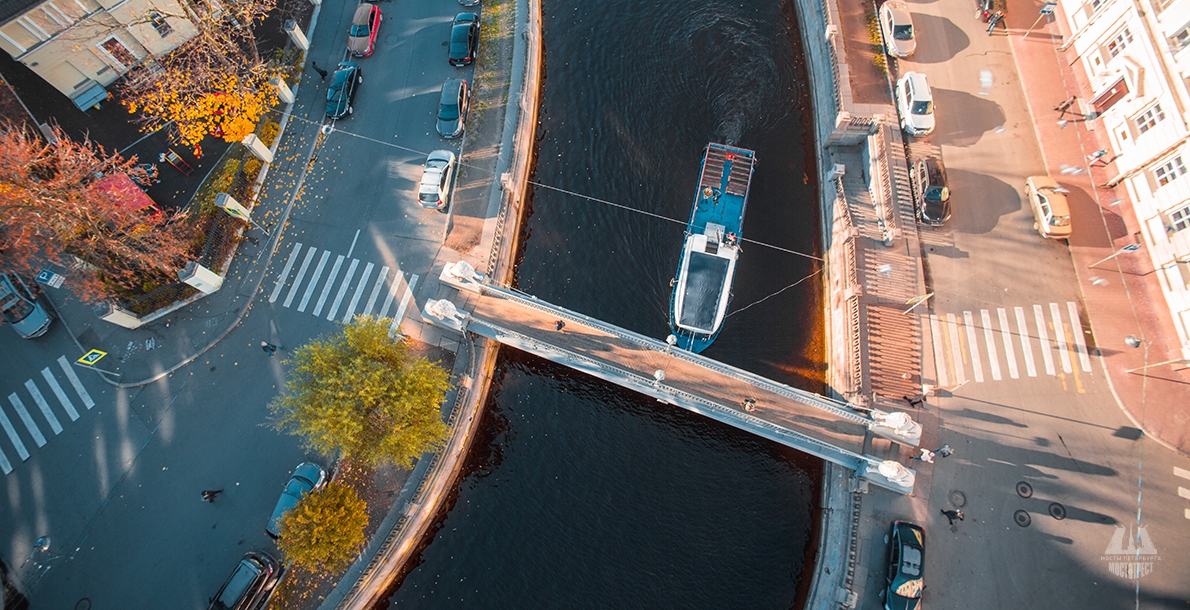 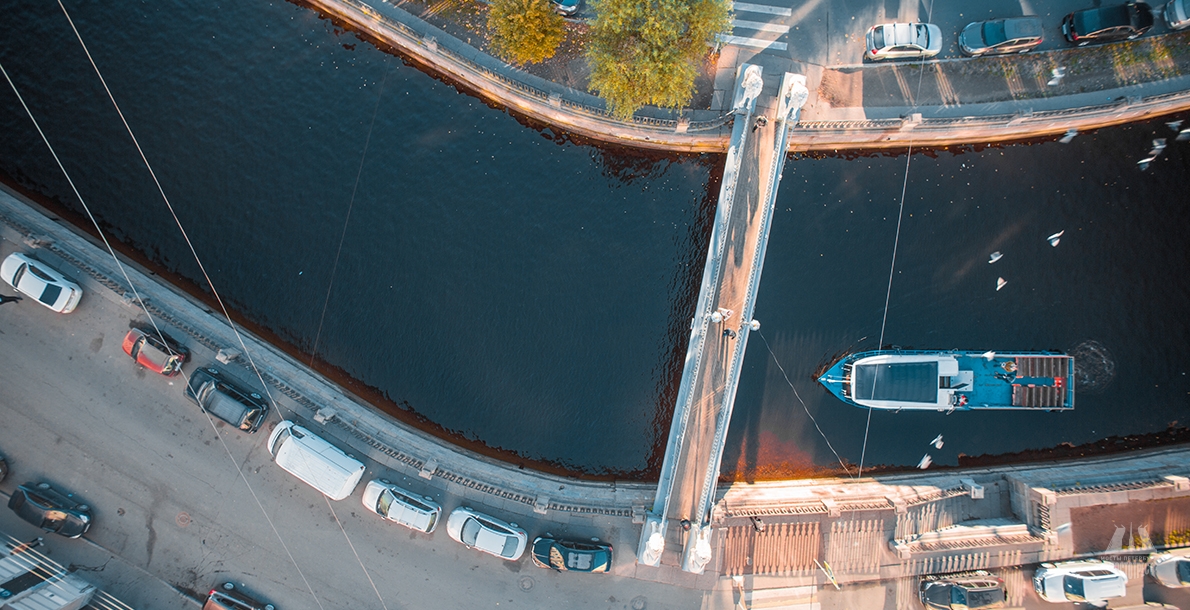 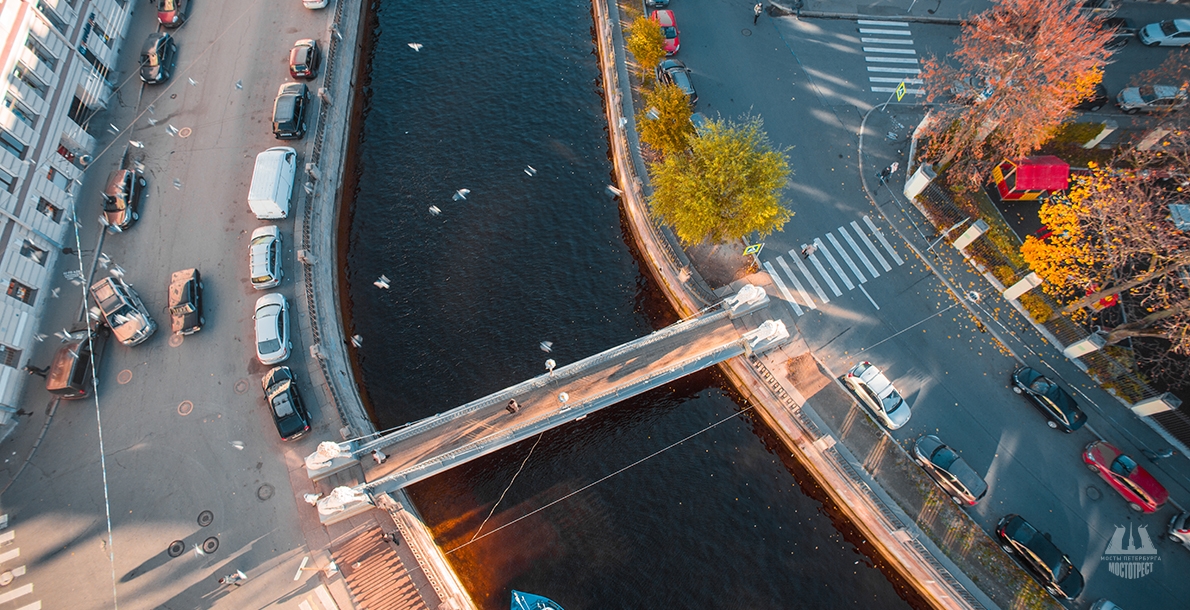 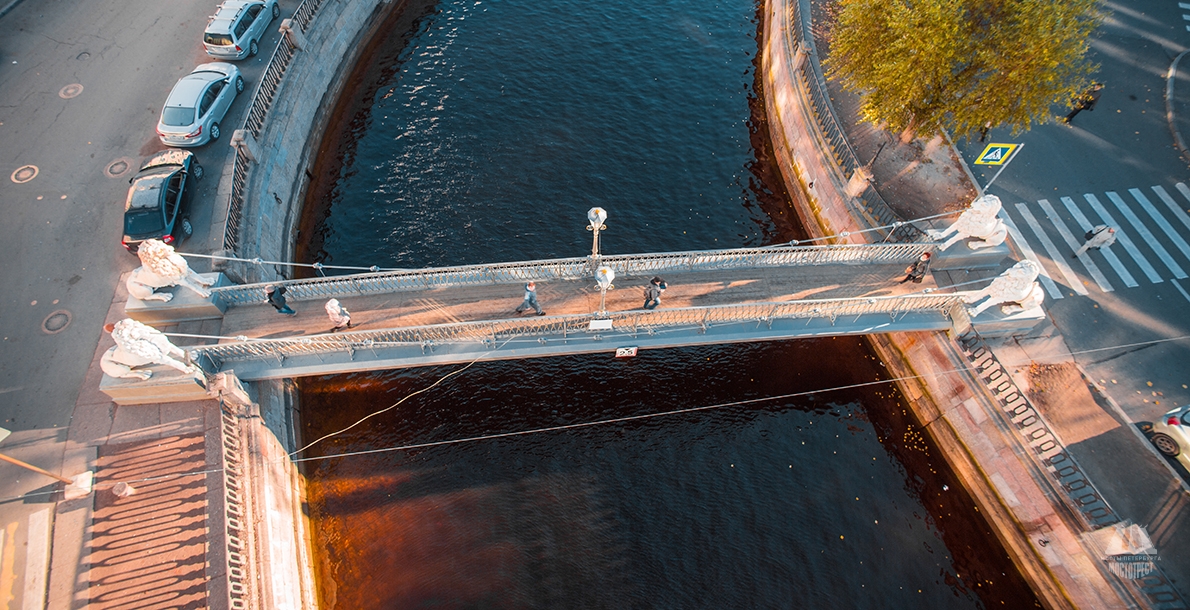 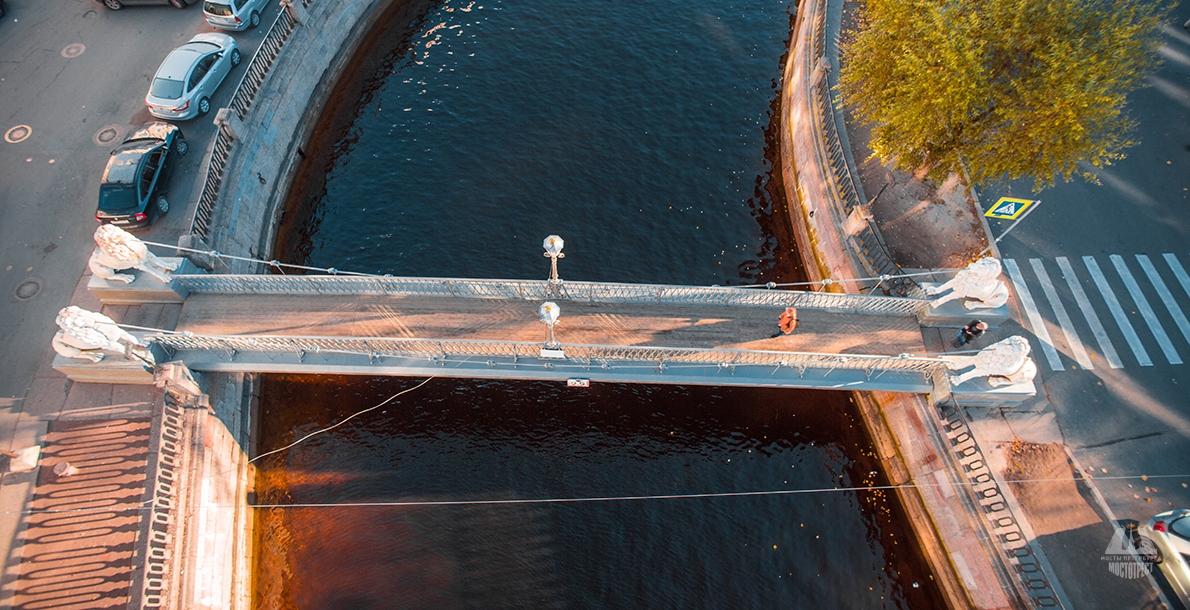 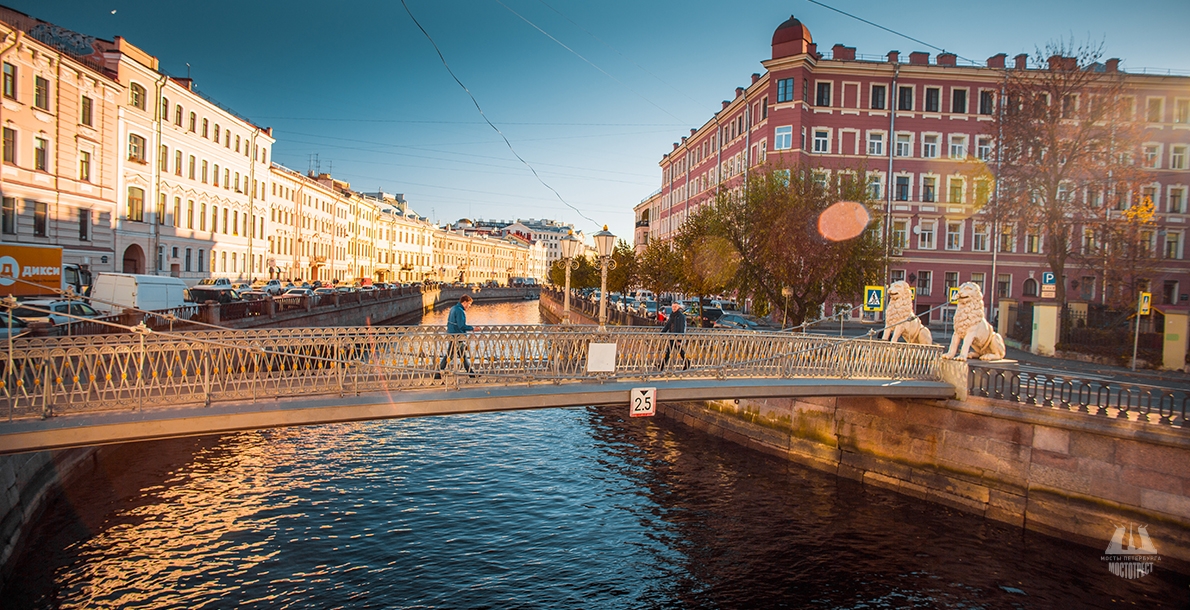 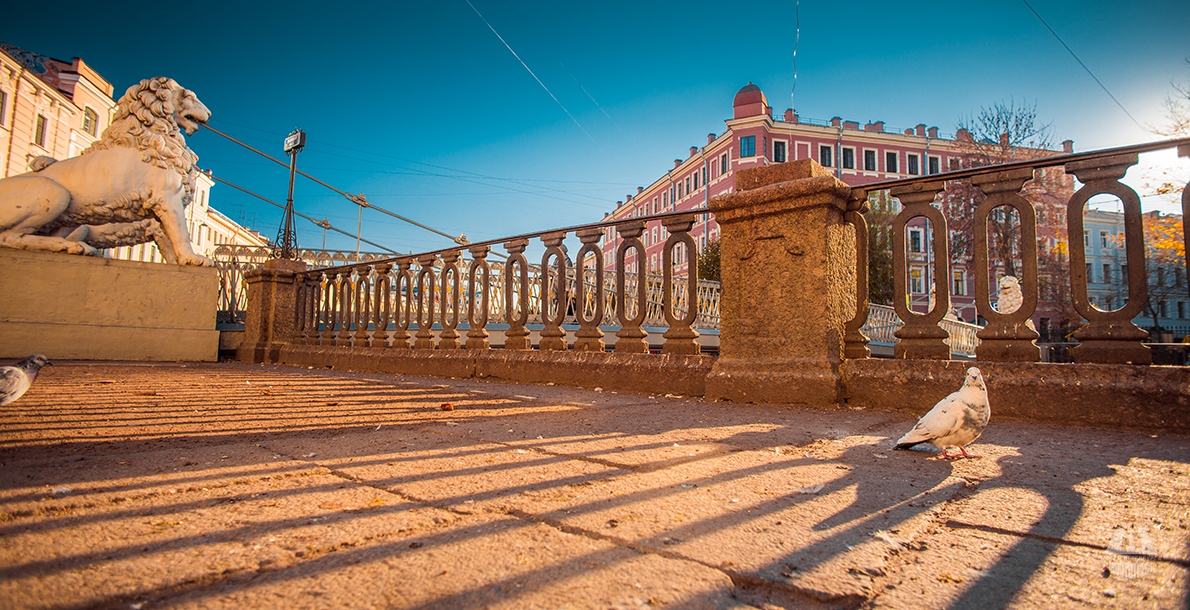 The Bridge of Four Lions is a pedestrian bridge across the Griboyedov Canal in Admiralty District of St. Petersburg, connects Kazansky Island and Spassky Island. It is an outstanding monument of bridge architecture of the first quarter of the XIX century. It is one of three extent pedestrian chain bridges in St. Petersburg (along with Bank Bridge and Pochtamtsky Bridge)

This is one of 6 suspension bridges built in St. Petersburg in the first quarter of the XIX century. The Bridge of Four Lions was built in 1825-1826, simultaneously with Bank Bridge.

It was supposed to complete the work by October 1825, but due to delays in the production of metal parts of the bridge the bridge construction began in the spring of 1826. For bridge supports construction the embankment back filling was dismantled (without disassembling the granite facing). Production of cast iron and steel parts, as well as assembly of the elements on the construction site, was performed by the Byrd’s factory. On July 1, 1826 the bridge was opened to traffic.

The Bridge of Four Lions is similar to Bank Bridge - single-span, suspension bridge. The span structure consists of chains, suspensions and wooden beams. The beams were attached to metal chains on the suspensions. The ends of the chains are pivotally attached to the cast iron pylons inside the lions' heads, tightly fastened to the supports with anchor bolts. Pylons are hidden inside decorative sculptures - lions and metal pedestals.

The sculptures were made by Academician - sculptor P.P. Sokolov. The figures of lions were cast at the Alexandrovsky Iron Foundry. Sleepers and timber decking were laid on timber beams. The bridge has quarry stone abutments on pile foundation, faced with granite. Cast iron openwork railing was installed on the bridge; in the middle of the bridge lampposts were fixed directly to the railing.

In 1838 a small copy of the bridge (length 17.3 m, width 2 m) was built by Borsig under the project of German architect L.F. Hesse on the territory of Tiergarten park in Berlin.

In 1880 the original cast-iron railings were dismantled from the bridge and replaced with a metal iron railing of a simple pattern and lights were modified.

In 1948 under the project of engineer O.M. Janowsky a major repair of the bridge was performed. Wooden beams were replaced with metal one, and to impart a curved shape they are composed of 5 segments welded together. As a result, the stiffening beams obtained a small ascending angle. All other structures of the bridge were kept in their original form.

In 1954 the old railings and lights were restored under the project of architect A.L. Rogach. Pedestals and sculptures of lions were restored. 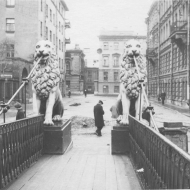 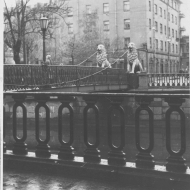 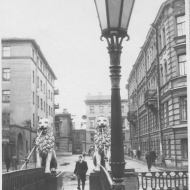 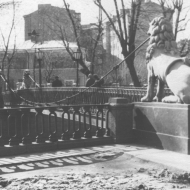 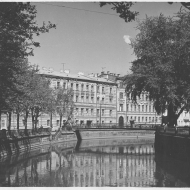 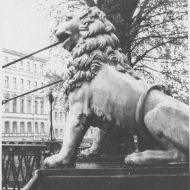 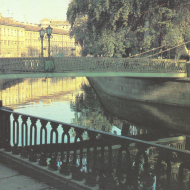