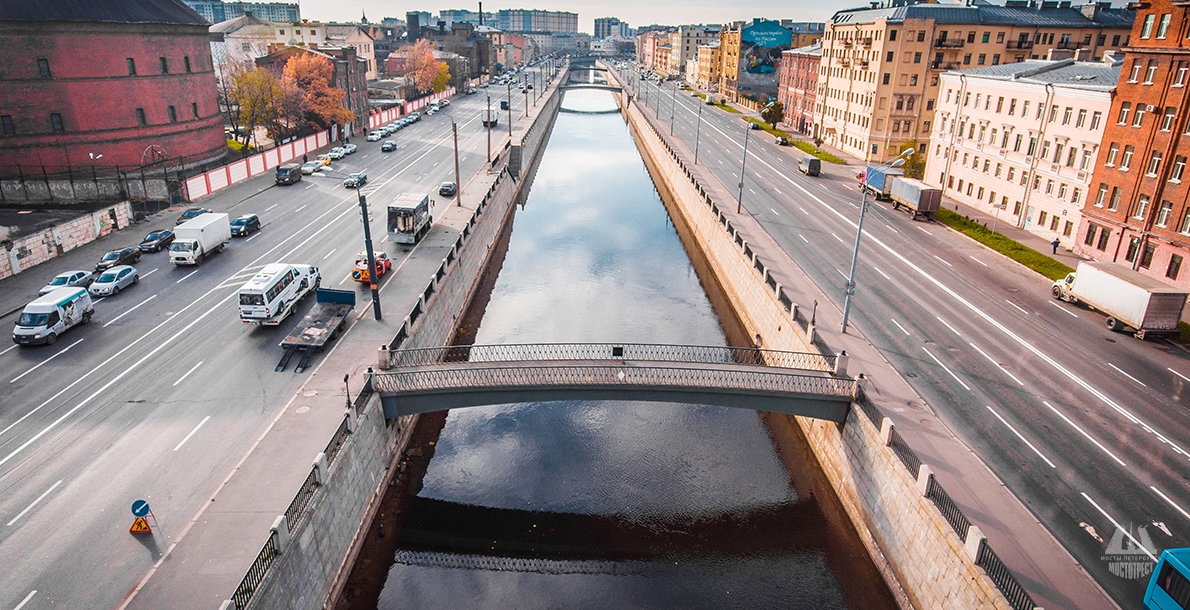 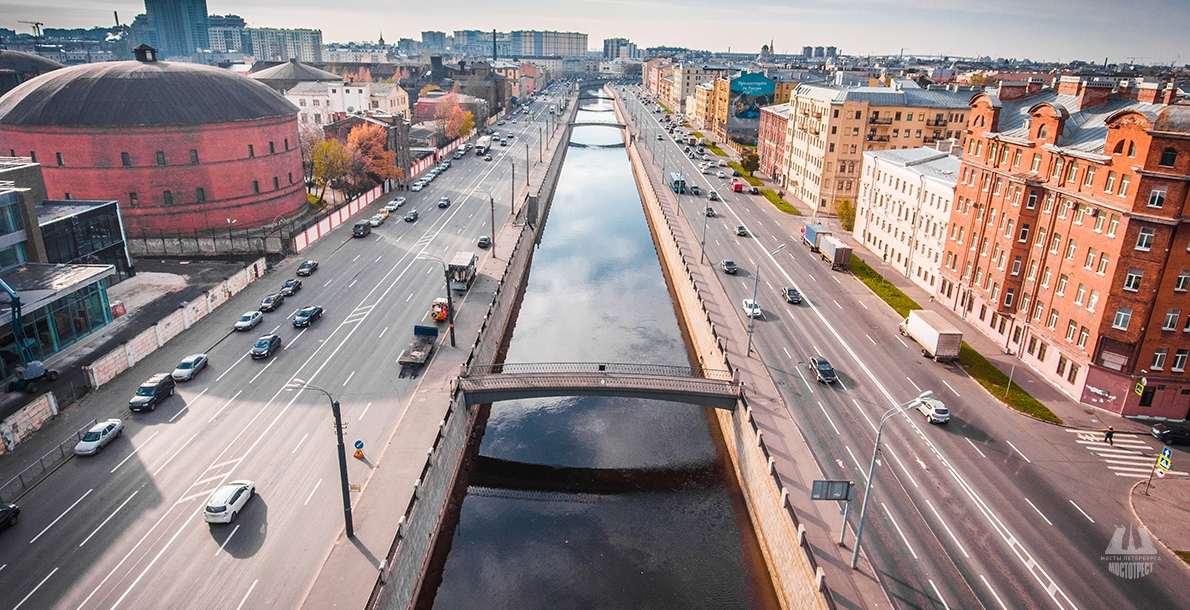 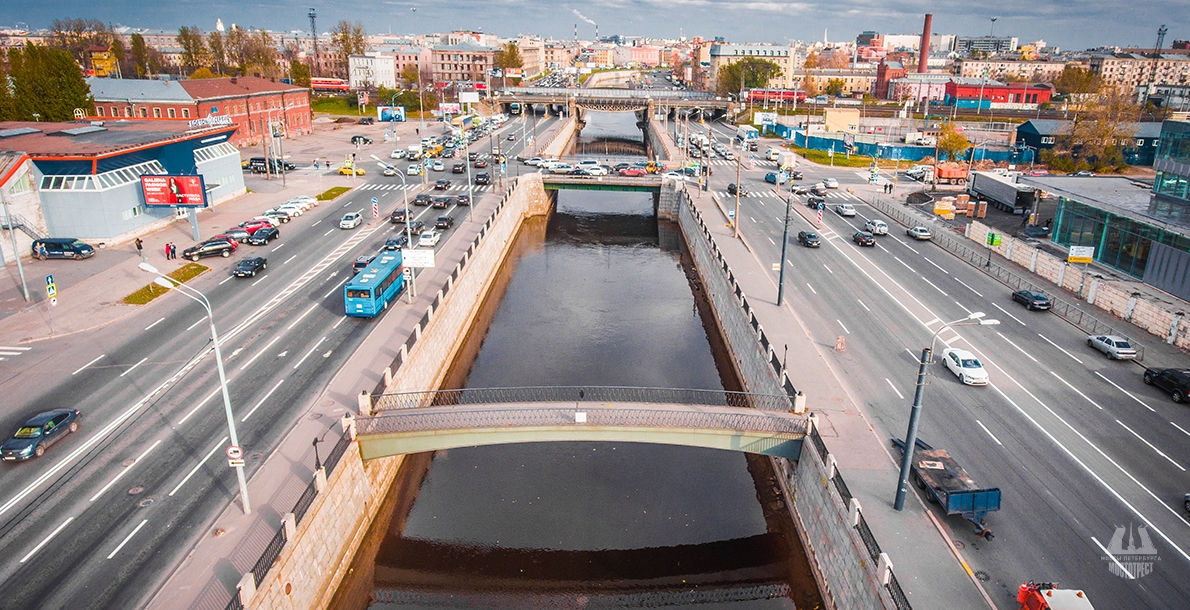 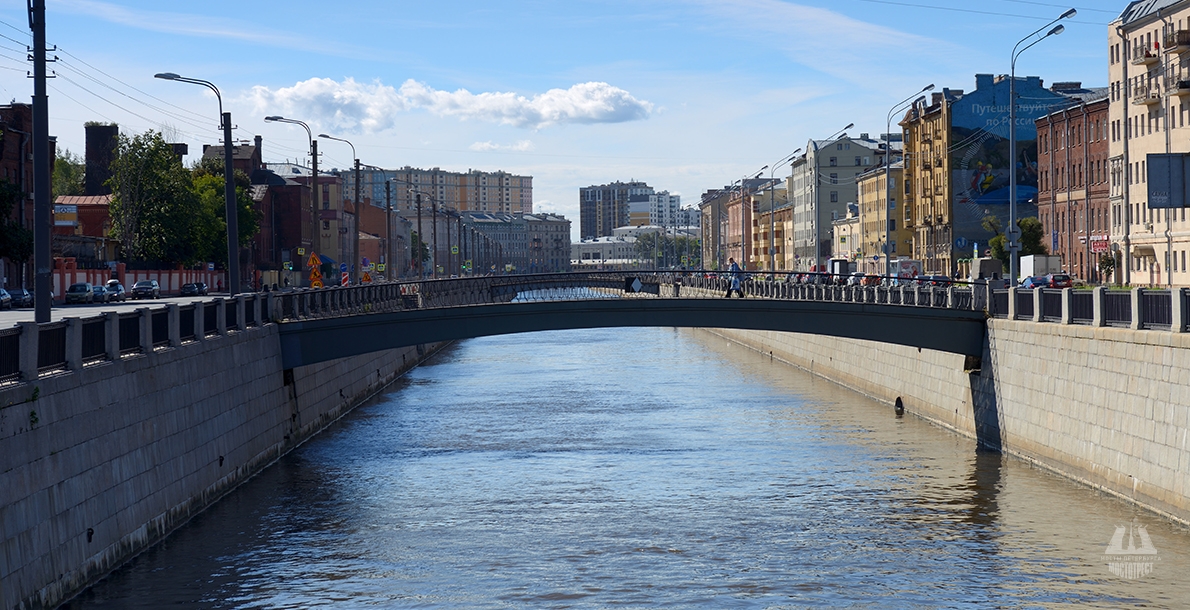 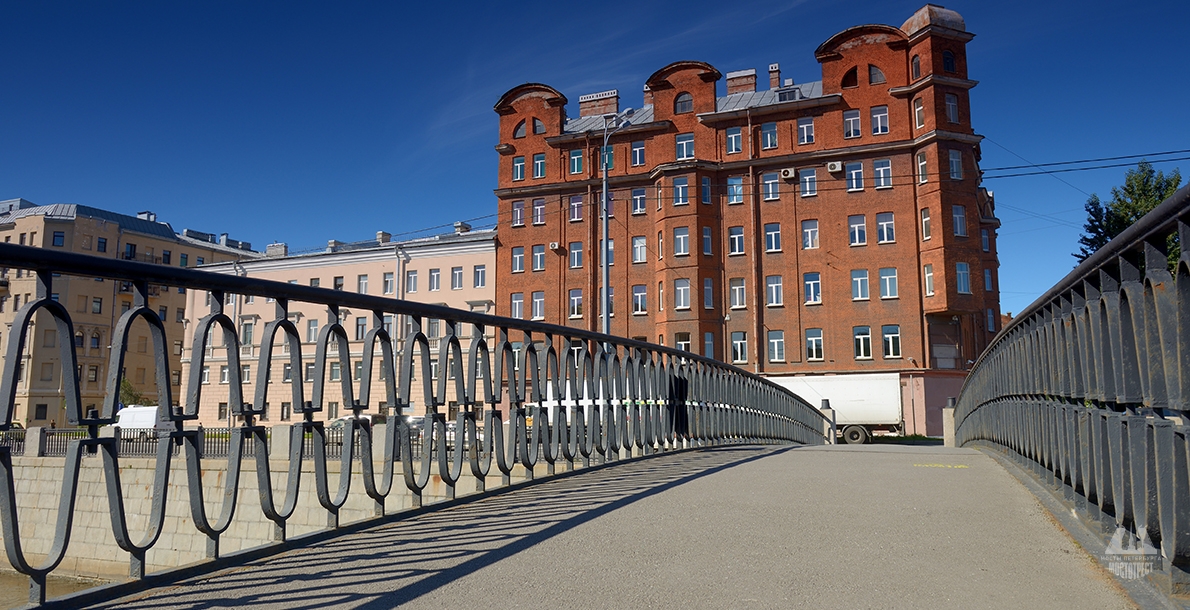 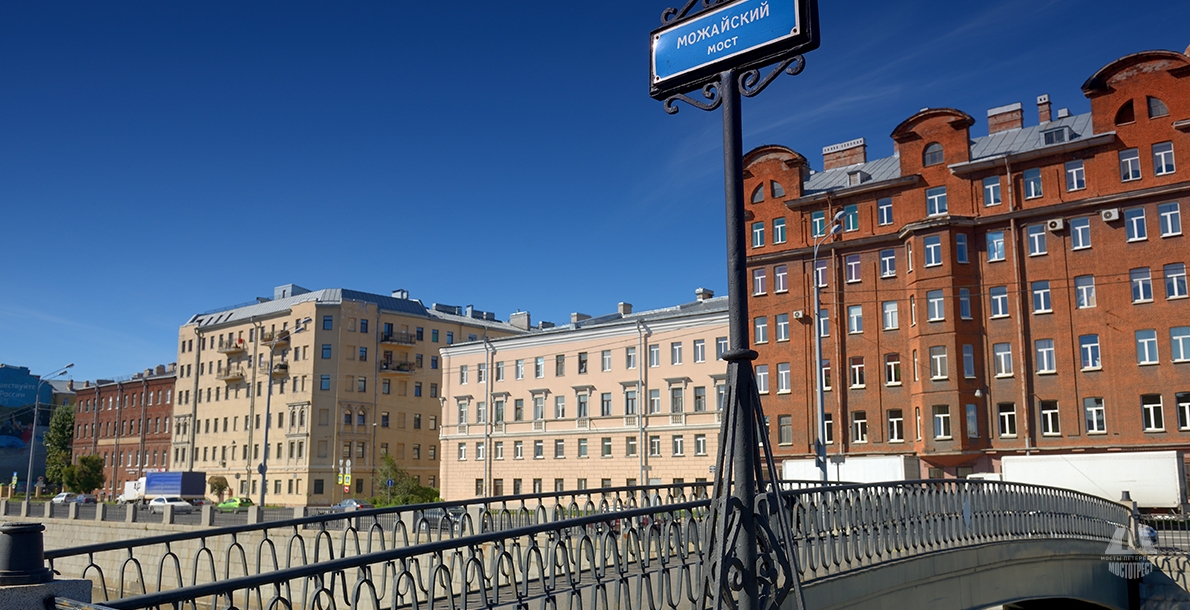 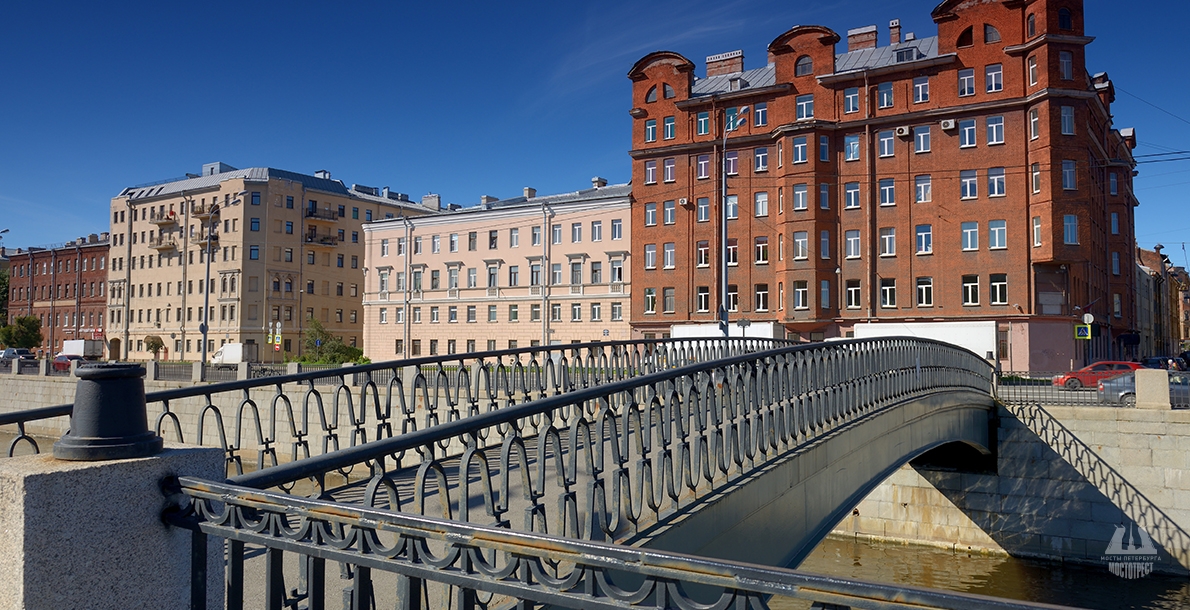 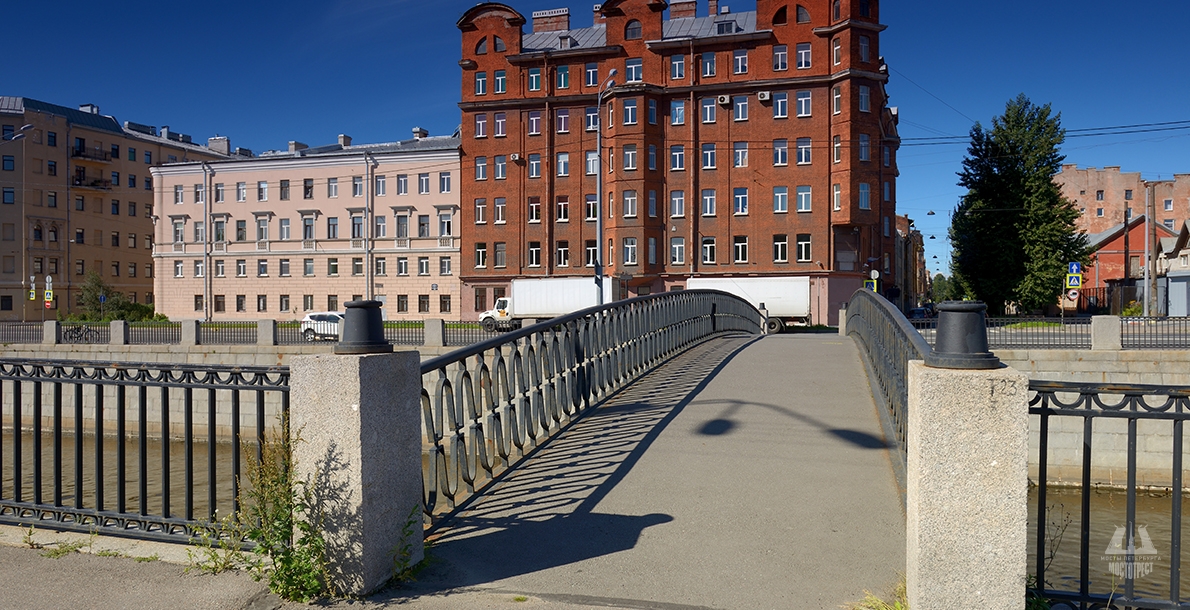 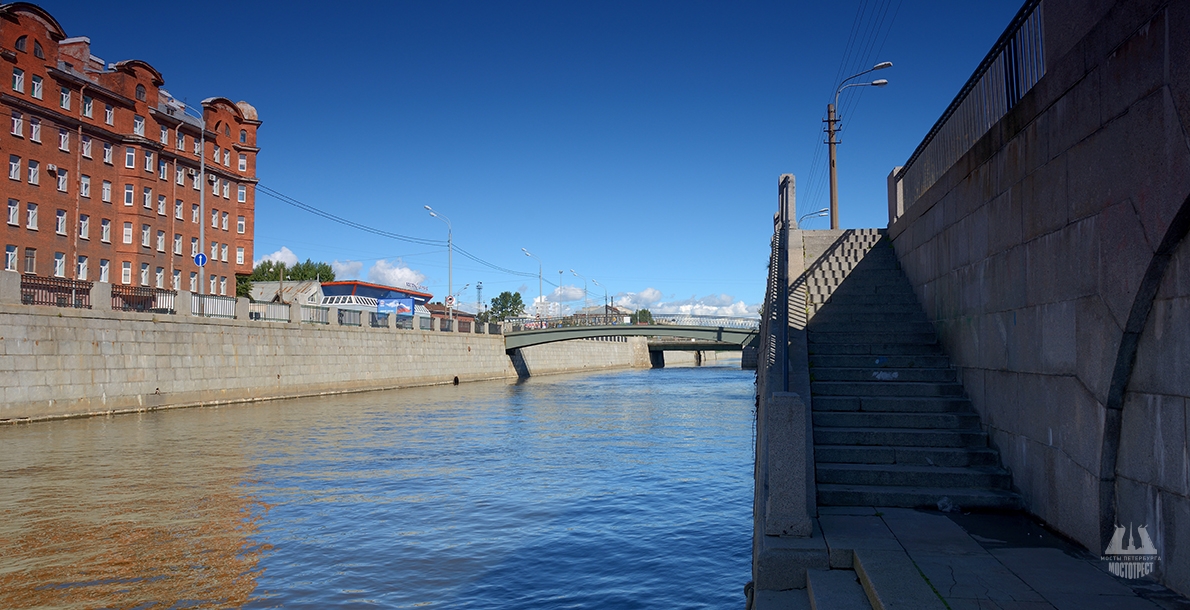 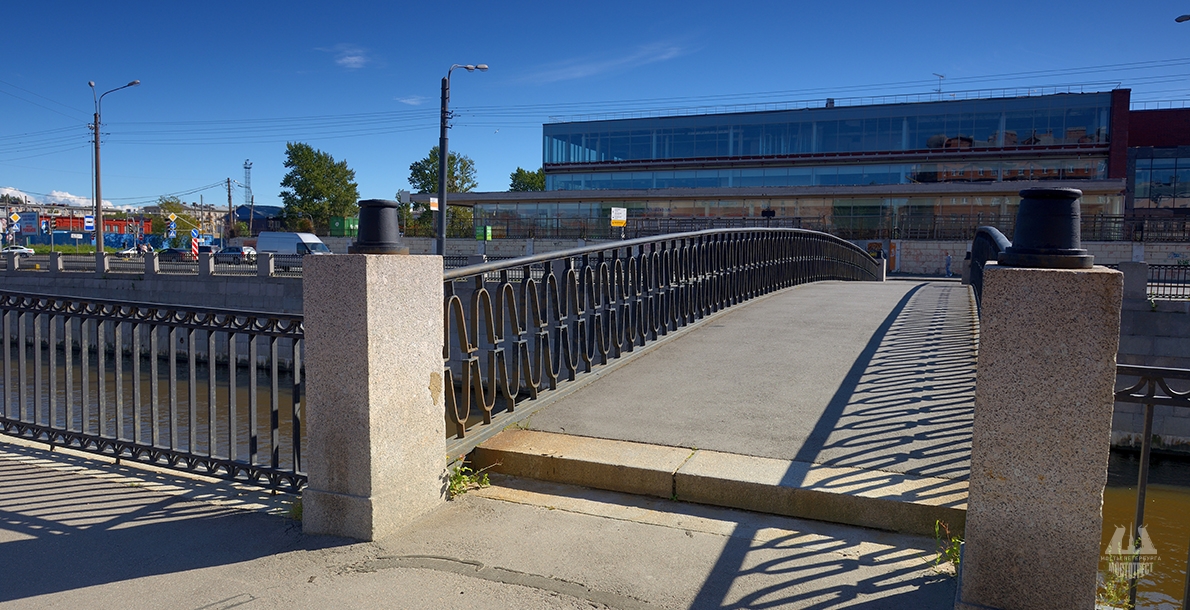 Mozhaysky Bridge is a pedestrian bridge across the Obvodny Canal in the alignment of Mozhayskaya Street.

This pedestrian bridge was built in 1984 under the project of engineer A.I. Rubashov of Lengiproinzhproject and architect V.M. Ivanov. Construction of Mozhaysky Bridge and neighbouring bridges was carried out simultaneously with the reconstruction of the embankment along the left bank of the canal.

By parameters and design solutions, the bridge is similar to Maslyany Bridge on the Maslyany Lane and Gas Bridge. The bridge derived its name from the street in the alignment of which it is located. It was named Mozhayskaya Street after one of district towns of Moscow province - Mozhaysk city.

Before the Great Patriotic War on the site of the new bridge there was a wooden vehicle bridge which after the war came into disrepair and was dismantled.

The bridge is a single span metal simple one with the orthotropic plate included in the operation of the main beams. District heating pipes are laid between the main beam under the plate. The pile grids of embankments are used in the abutments foundation. At the entrances to the bridge there are stand lamps with single tetrahedral stylized XIX century suspended lanterns.

The bridge length is 30.7 meters, and its width is 3 meters. There is an eposlane concrete pavement on the bridge. Maximum load on the bridge is 400 kg/m².

The railings are welded metal ones with a diamond-shaped pattern.

In 2000 stand lamps with lanterns were dismantled.

In 2008 cosmetic repair of the bridge was carried out; facades were painted during the repair.

In the same manner as Maslyany Bridge, it is in close proximity to the former gasholders - tanks for storage of gaseous substances that were popular before the revolution, and now they are more and more interesting to the representatives of the creative industries who are ready to reconstruct them to suit their needs. In addition, the bridge leads to several car dealer centres, that is why, despite the fact that the bridge is a pedestrian one, it is possible to meet automobilists on it – present or future ones. 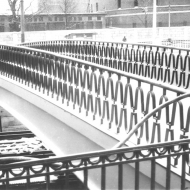