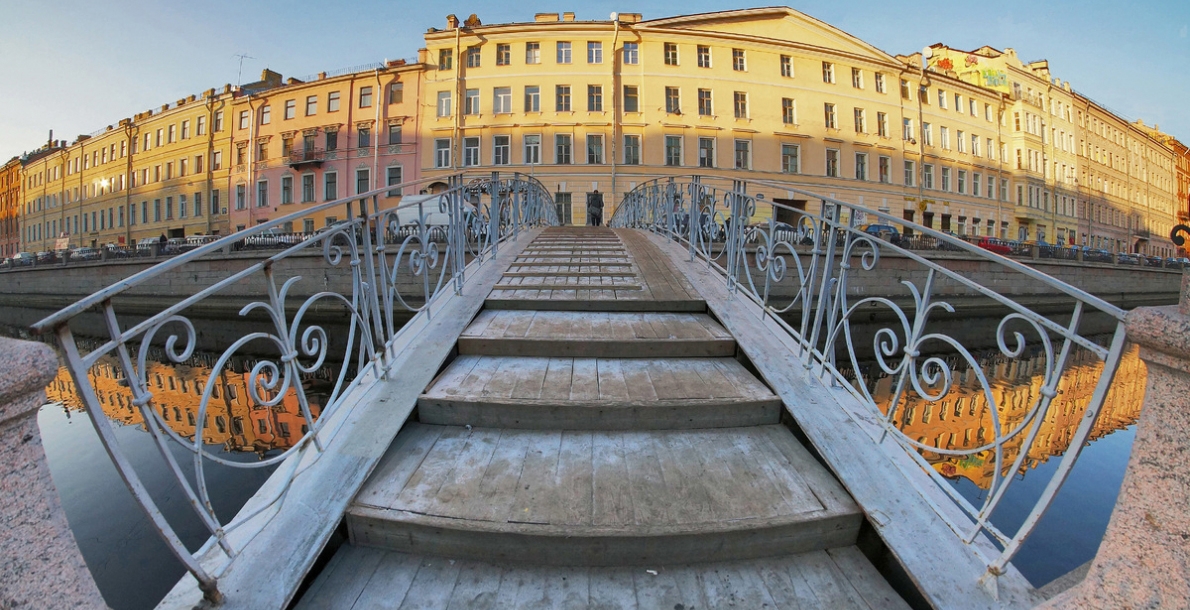 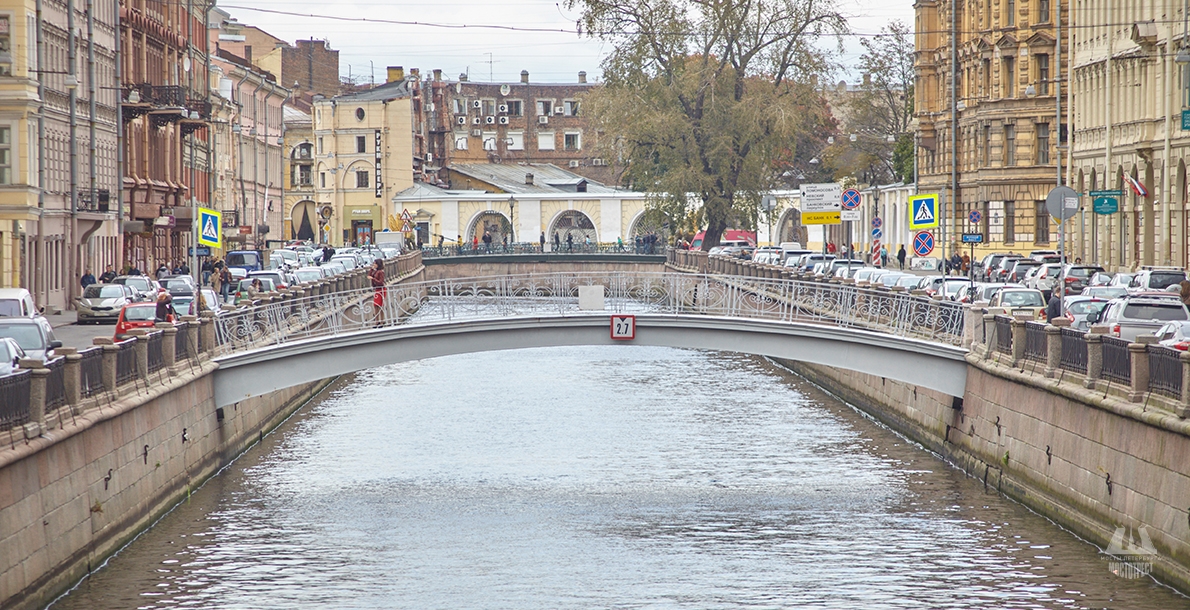 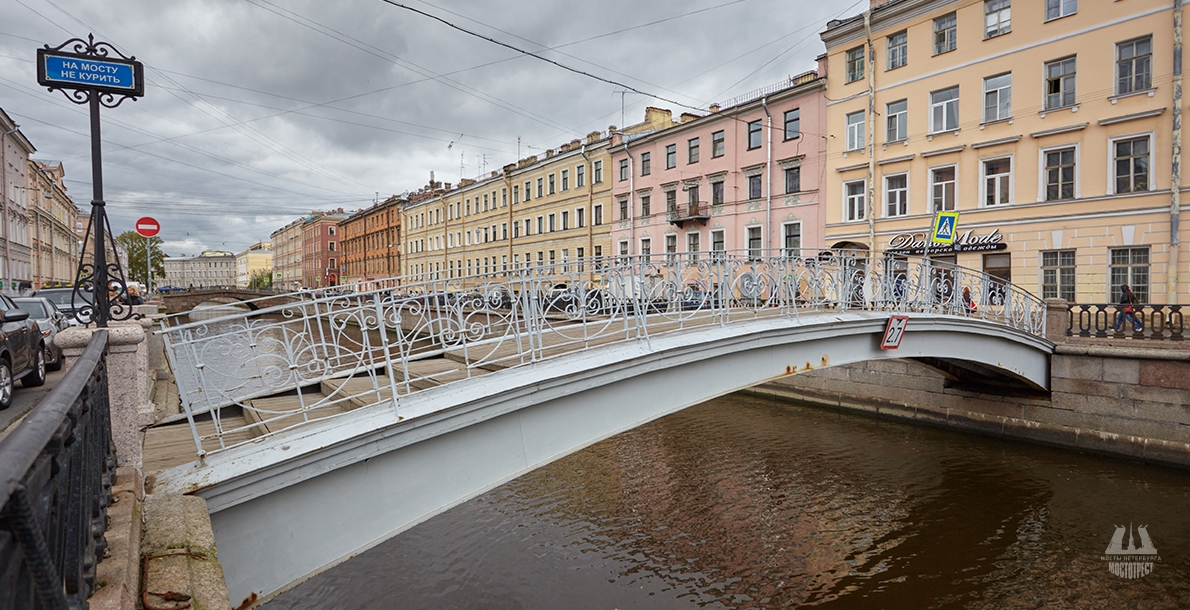 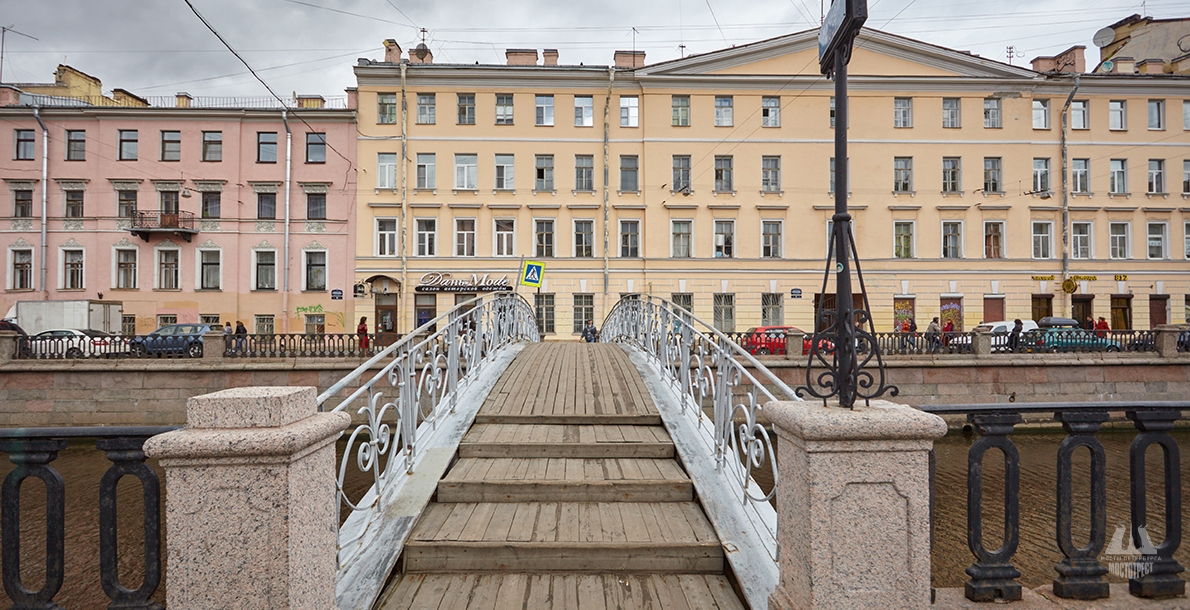 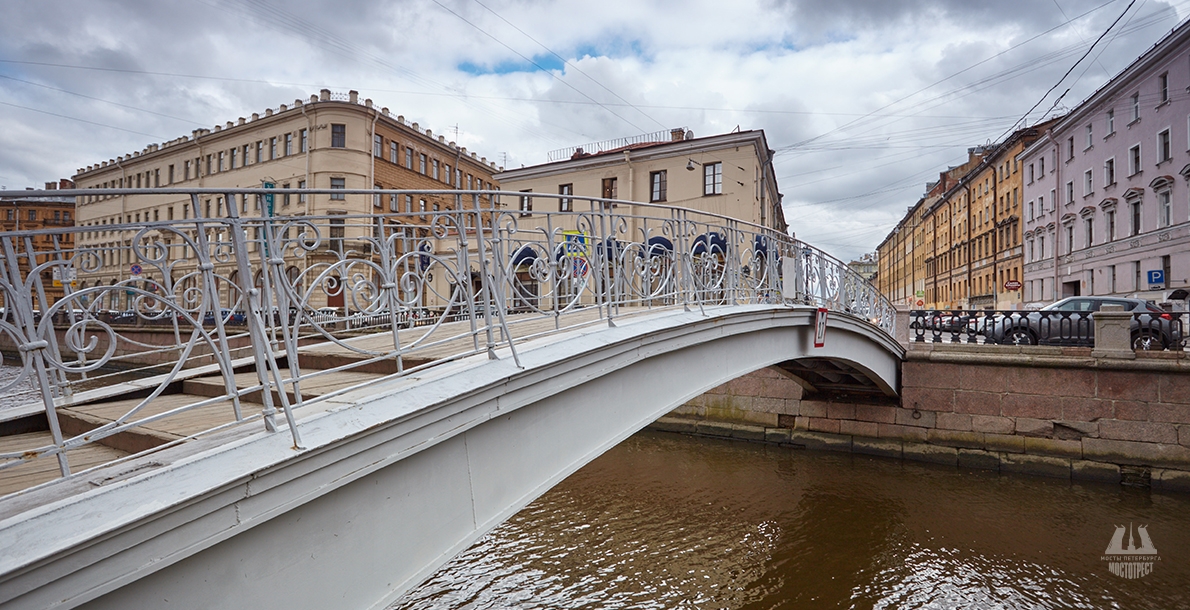 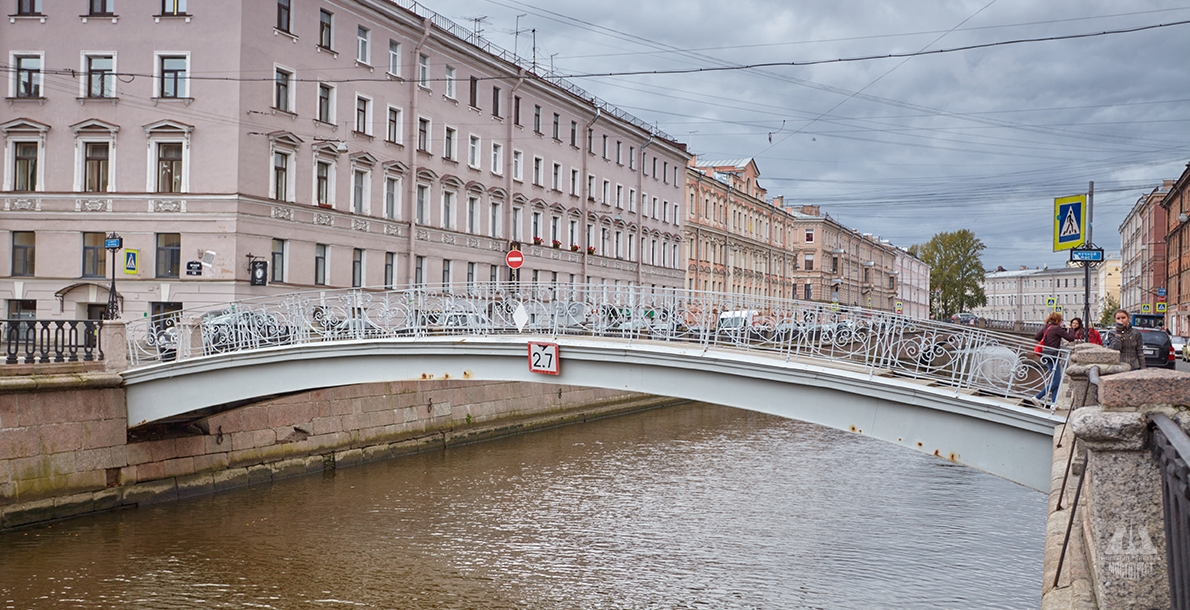 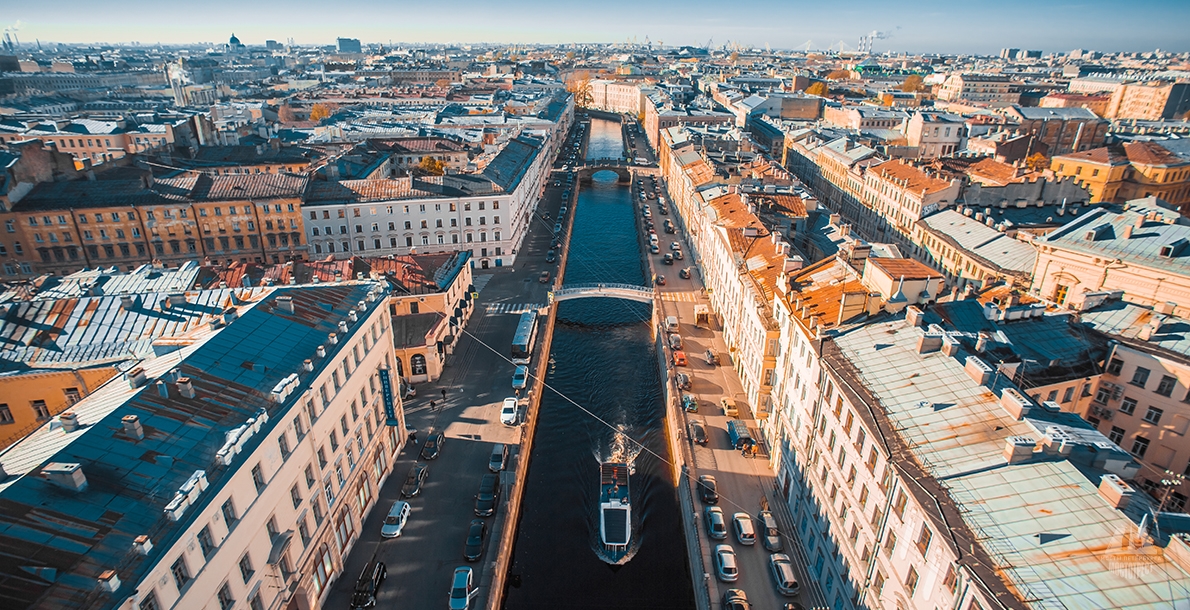 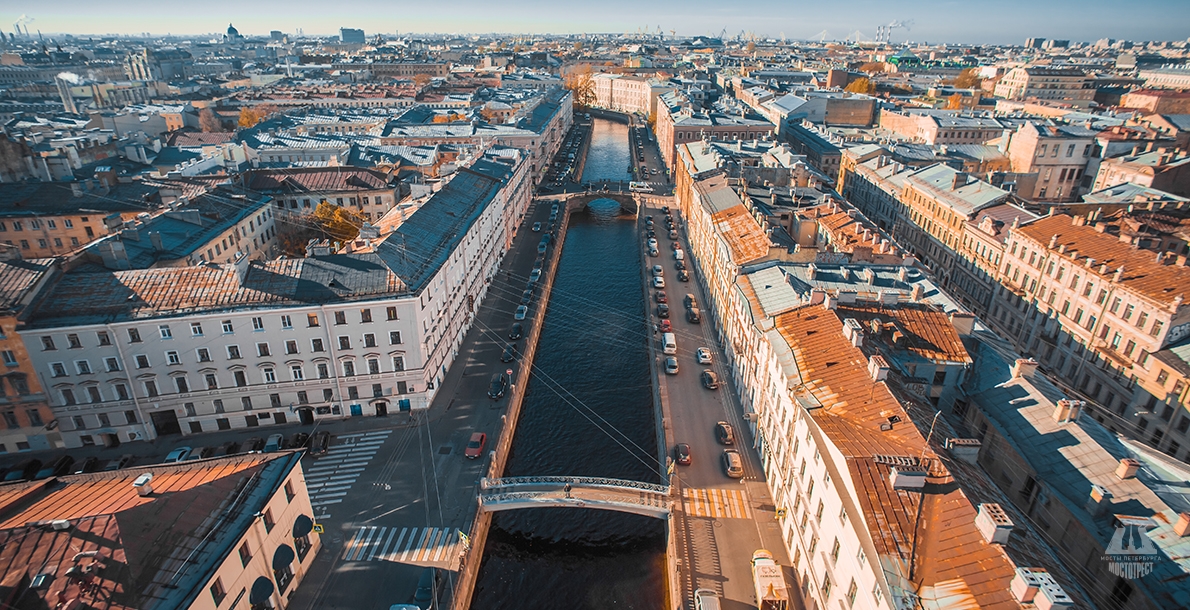 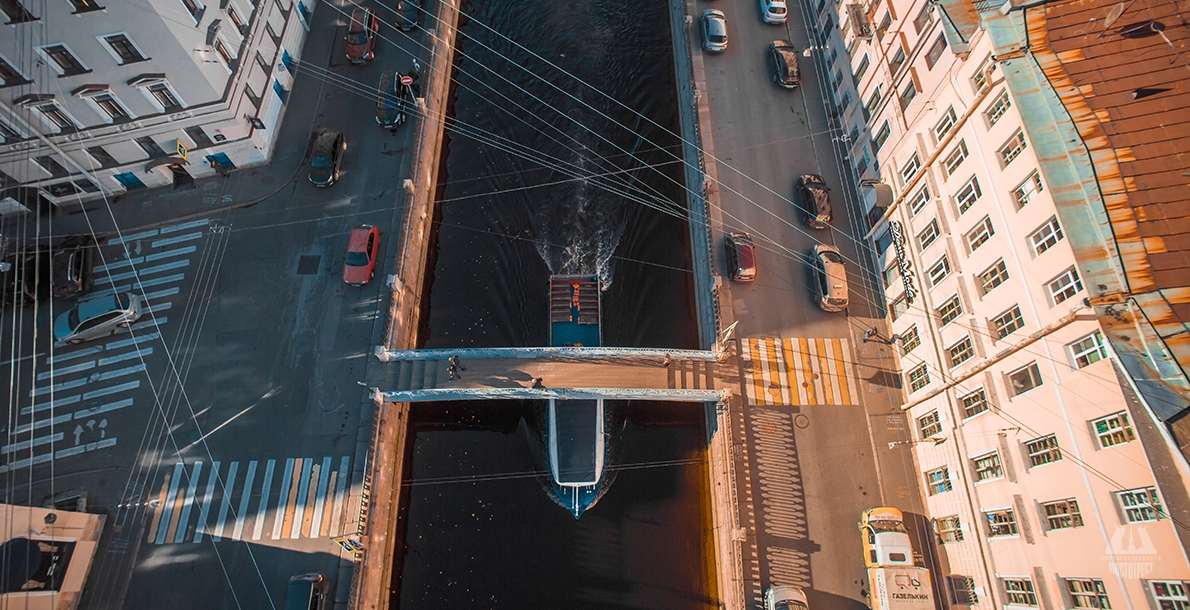 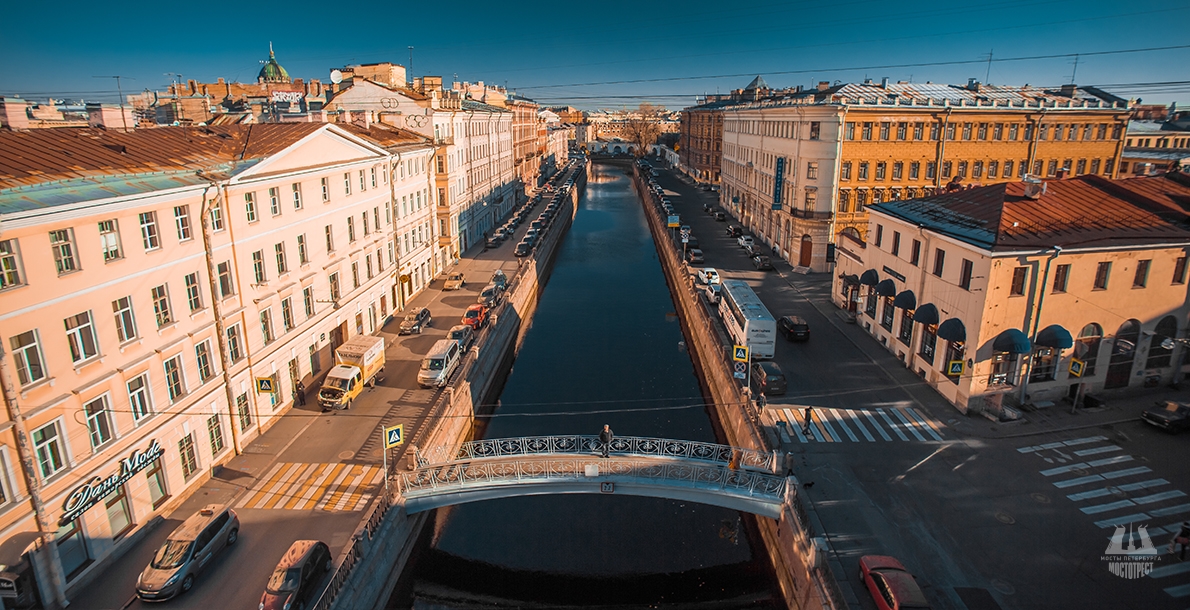 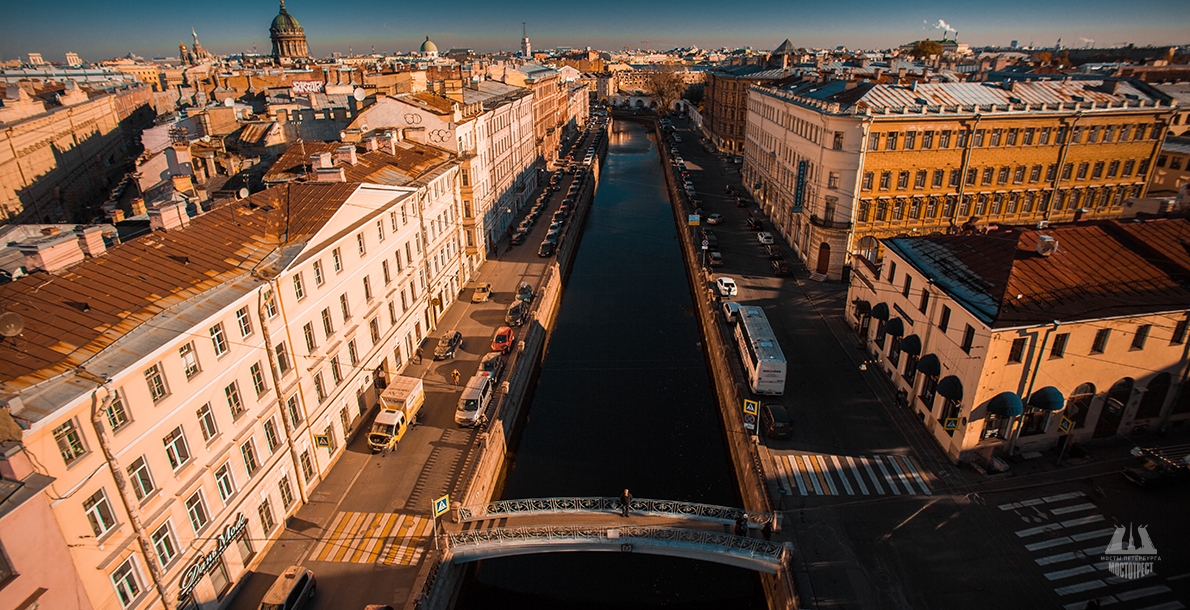 Flour Bridge is a pedestrian bridge across the Griboyedov Canal. It connects Kazansky Island and Spassky Island in Central District of St. Petersburg.

The bridge is located in the alignment of Muchnoy Pereulok (Flour Alley) which name was derived from the row of the flour shopping rows. The bridge derived its name from the name of the alley.

In the middle of the XVIII century, between Sadovaya Street and the Griboedov Canal Embankment, wooden shops were placed where flour was sold. There wasn’t special need in crossing at this place - a good and large Stone Bridge is already there 100 meters apart.

At first the future Flour Pedestrian Bridge was just a simple suspension structure for the heating duct. It was arched over Griboyedov Canal in 1931.

The bridge was a single span simple construction with a wooden superstructure which consisted of three girders; each girder consisted of three beams. Two-heating pipes were suspended between the girders. There were arched abutments. Over time, the bridge came to the dilapidated state.

In 1951 Flour Bridge was rebuilt under the project of V.P. Bazhenov for the purpose of district heating pipes laying . Since that time, it became a pedestrian bridge. Granite walls of the Griboyedov Canal embankment serve as supports for single-span metal structure of the bridge.

The wooden superstructure was replaced by a metal welded one with the curved outline of the lower chord, between which heating pipes are laid. Railing of a simple pattern is installed on the bridge. The bridge was opened for pedestrian traffic.

In 1952 simple gratings were replaced with the ones dismounted during the restoration of Bank Bridge, installed there in the end of XIX century under the project of G.M. Treter.

In 1977 the following was repaired: wooden elements of the bridge were replaced and painting of metal structures and railing were restored.

Flour Bridge is perhaps one of the most unassertive and simple bridges of St. Petersburg. But at the same time subtle contours of its air, unassuming grating, and a semi-circular steel bright white beam that connects the canal banks on a background of old buildings - all this fascinates the observer. Despite the fact that appearance and shape of Flour Bridge belongs to the Soviet era, its image is often used as a symbol of old St. Petersburg. And on the bridge and the surrounding areas they traditionally make films about pre-revolutionary Russia.

If you look at the city plan in 1738 you can see that the flour merchants' rows were placed along Sadovaya Street, approximately opposite Apraksin Lane. In the middle of the XVIII century, stone flour shops were built instead of the wooden merchants' rows. Most of them were burnt, or were completely destroyed during a severe fire in the middle of the XIX century. Only building No.36 located on the corner of the Flour Alley on the Griboyedov Canal has survived from the original development. Building No.38 on the Griboyedov Canal is placed on the other side of the bridge. It is remarkable for the fact that in 1846 the young Chernyshevsky quartered in one of its apartments when he came to enter Metropolitan University. After some time, he wrote a letter to his native Saratov where he admired the brilliance, crowded and lively social life of St. Petersburg. 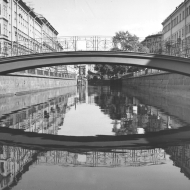 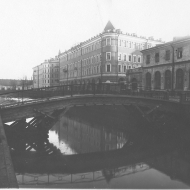