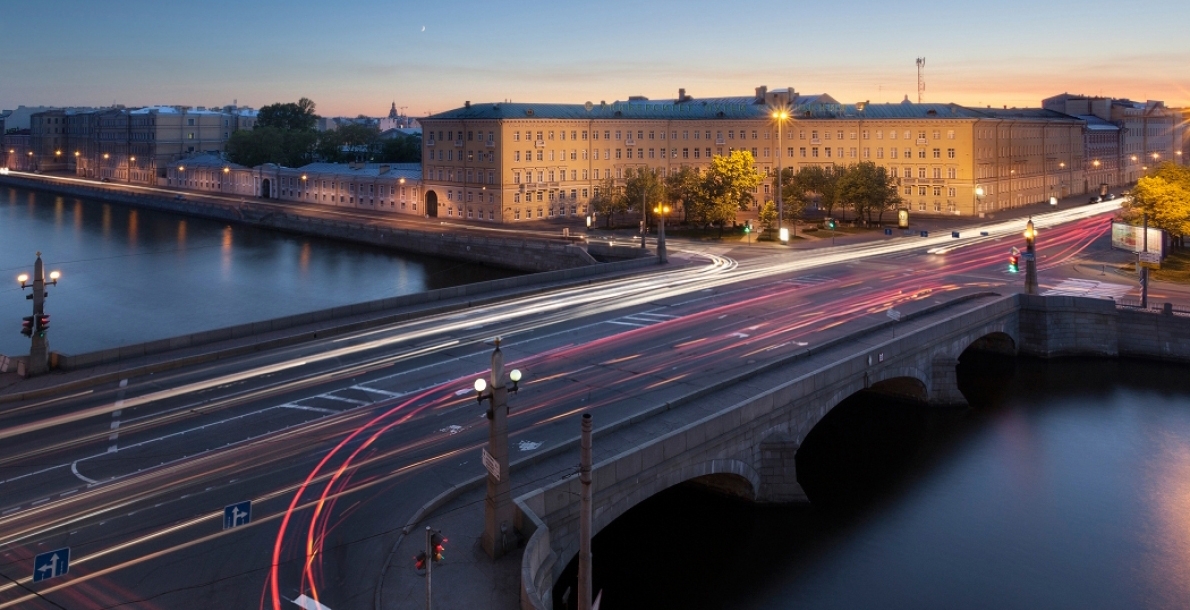 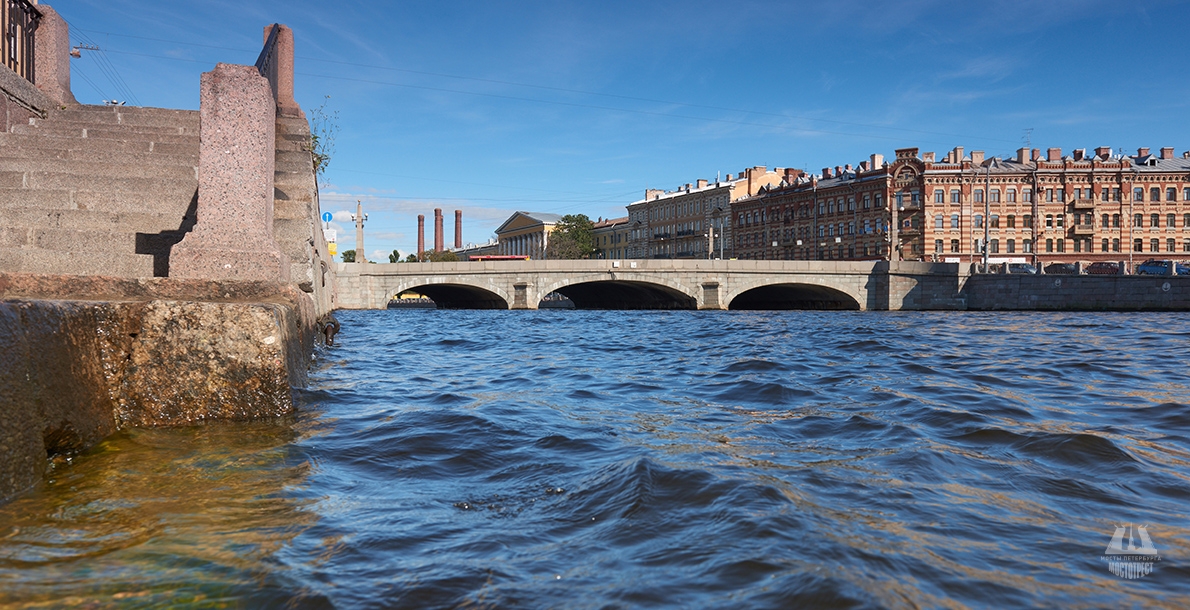 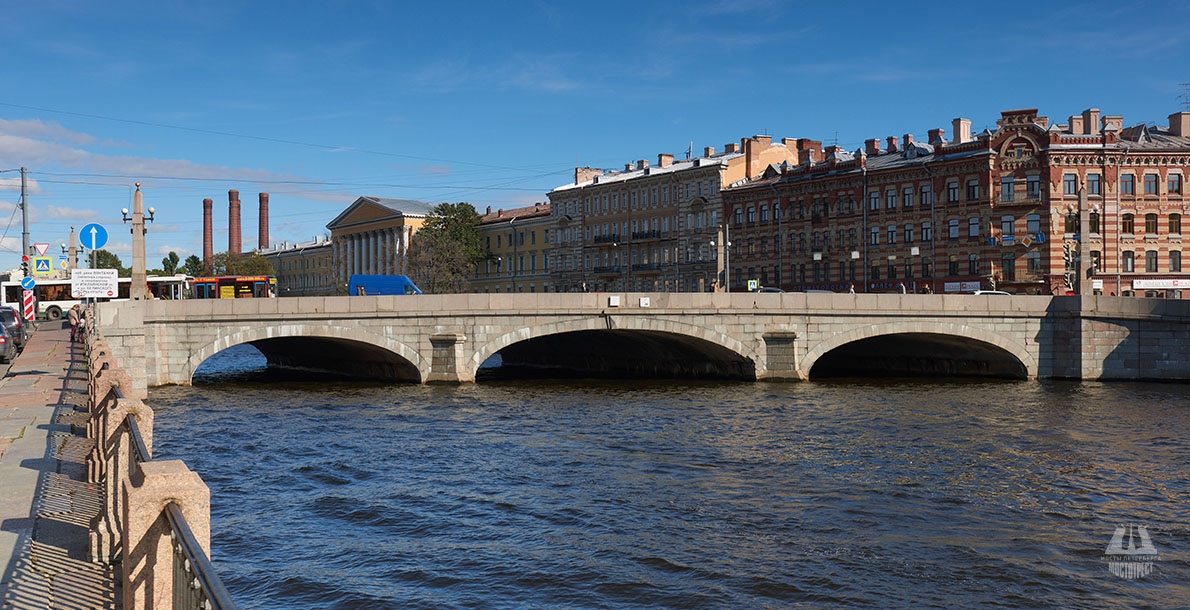 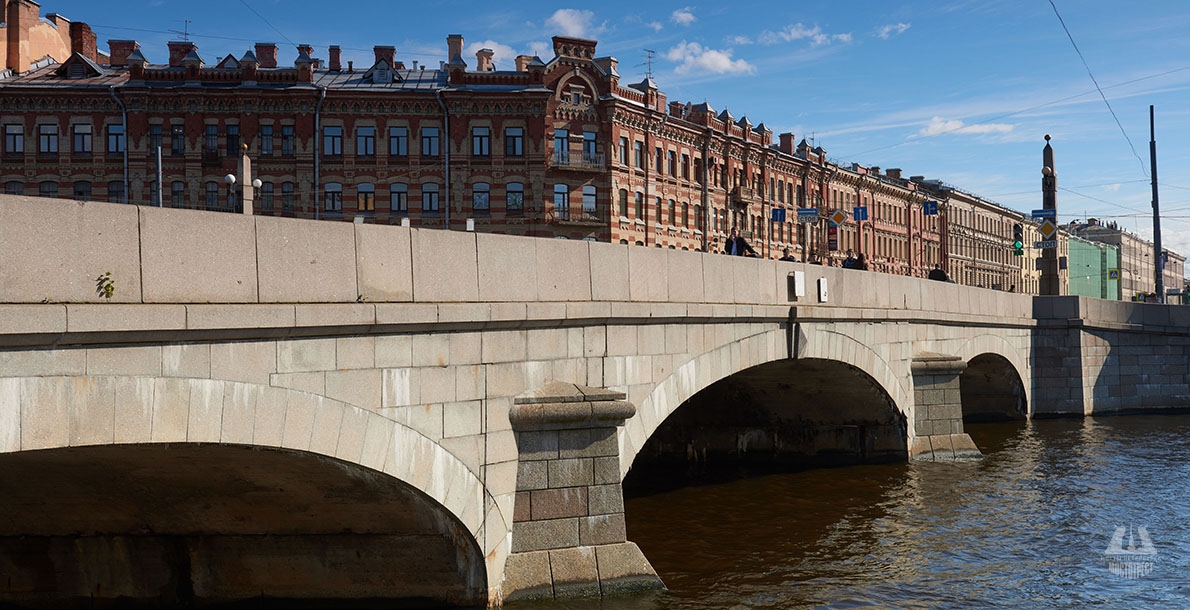 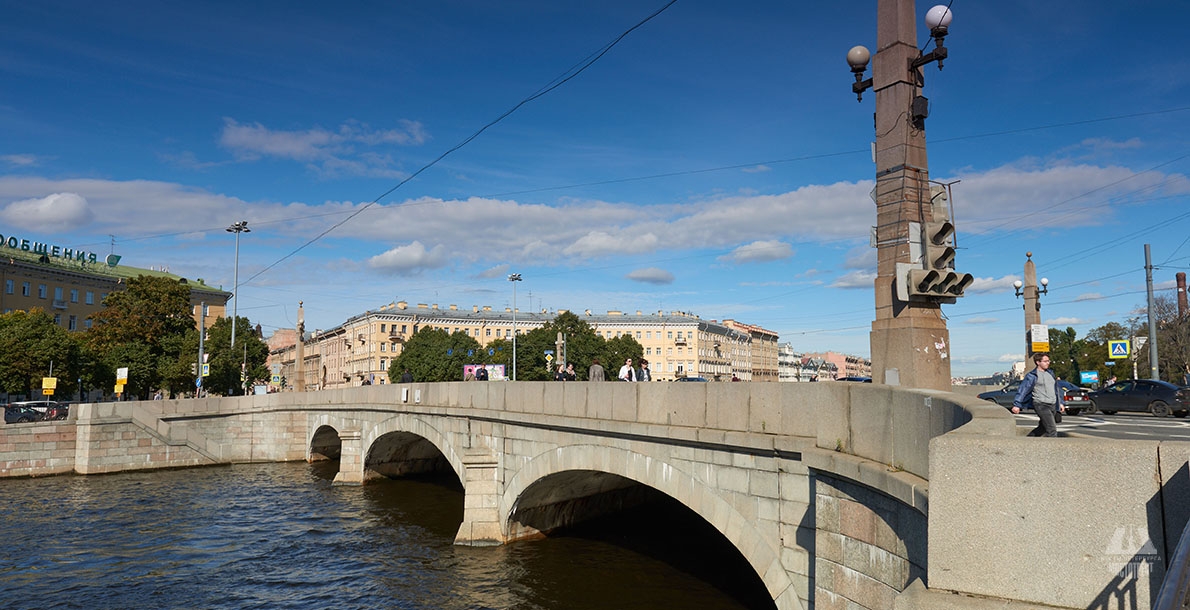 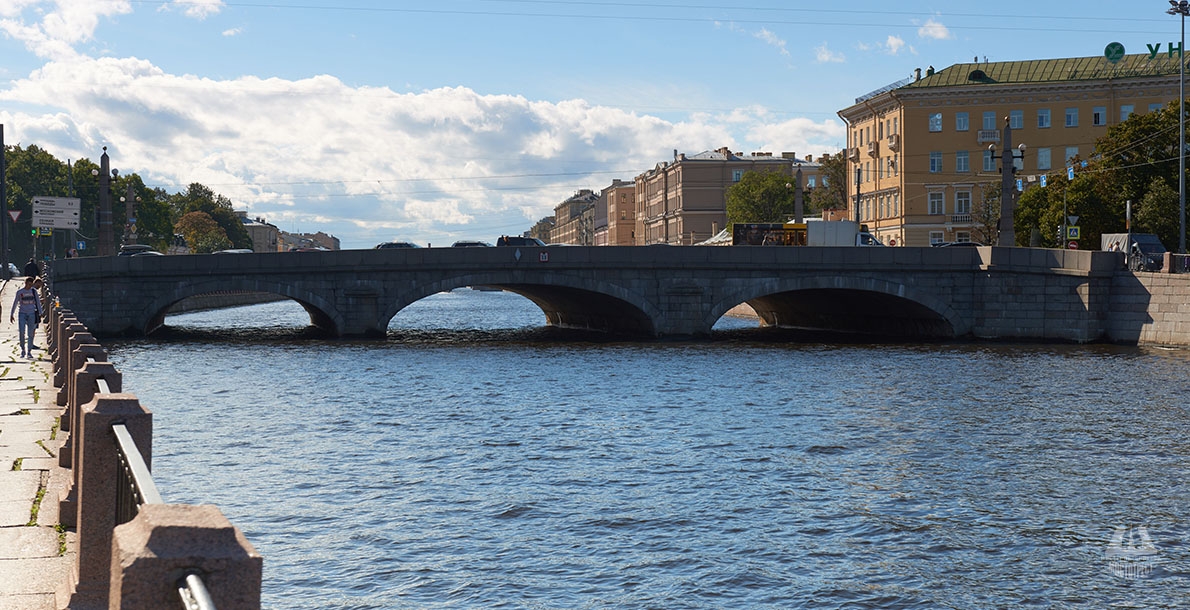 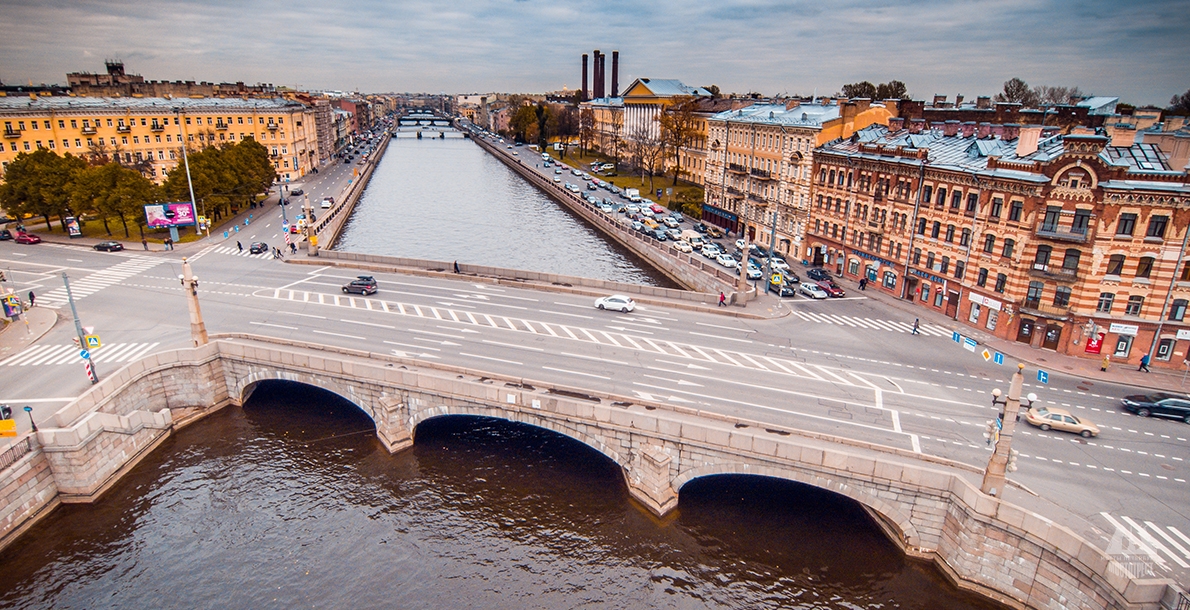 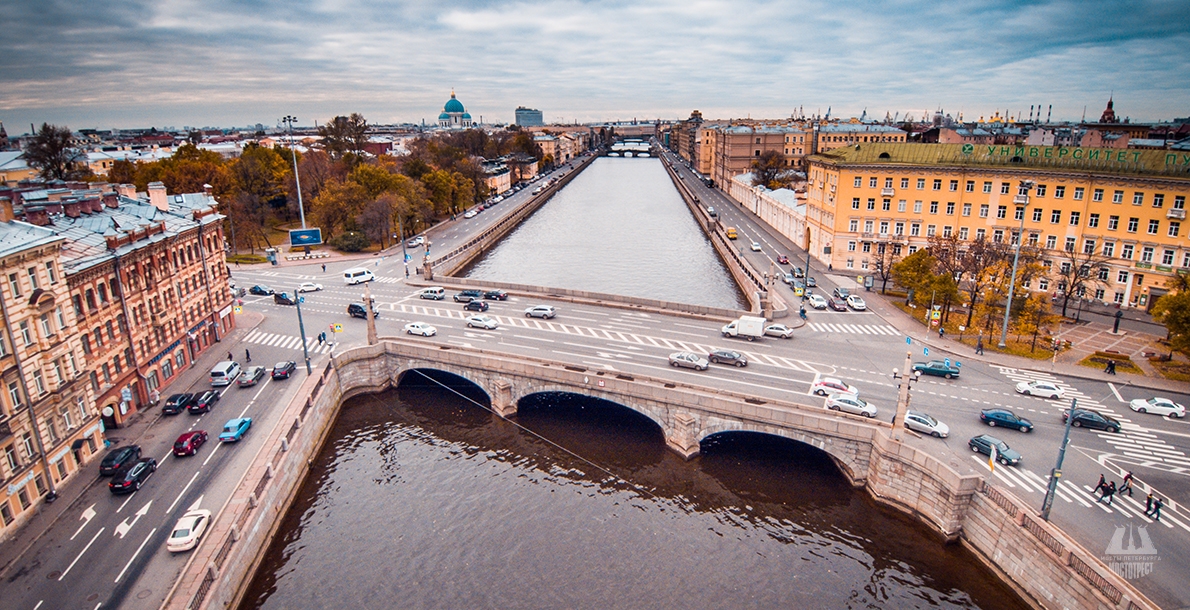 Obukhovsky Bridge is one of the oldest bridges in St. Petersburg. It was built over the Fontanka River in line with the Saarskaya Perspektiva (later Tsarskoselsky Prospekt, now Moscowsky Prospekt).

The first wooden bridge across the Fontanka River in alignment of modern Moscowsky Prospekt was built in 1717. In the centre the bridge has a transverse gap (width of 70 cm) intended for the passage of mast ships; in the day time this gap was covered by the boards. In 1738 the crossing was rebuilt.

Until 1738 the bridge has not an official name. Common name - Obukhov or Obukhovsky was given to the bridge by name of its builder "inhabitant of a suburb" Pavel Matveyevich Obukhov. In 1738 the Commission for the St. Petersburg Construction has established a name Saarsky bridge for the bridge. It has not been taken on, and the bridge to this day retains in its name the memory of the civil works contractor - Obukhov.

During construction of the granite walls of the embankment in the years 1785-1786, the wooden bridge was rebuilt in stone one by the type of three-span tower bridges: Lomonosov Bridge and Staro-Kalinkin Bridge. Shore spans were covered with stone arches, and the central span was a wooden draw span and towers on the river piers to accommodate the raising mechanisms.

In 1865 a wooden draw span superstructure was replaced by a brick vault and superstructure towers were dismantled. According to static circuit the bridge was turned into three-span fixed-end arch. The width of the bridge was 16 meters, but this was not enough for the increasing urban traffic. Moreover, dangerous cracks have been found in the brick vault as a result of deformation of supports.

In 1939 under the project of engineer V.V. Demchenko and architect L.A. Noskov the bridge was rebuilt in three-span reinforced concrete one faced with granite. An angle between the longitudinal axis of the bridge and the supports planes is of 60°. There are reinforced 2-hinged arch spans. According to the construction - reinforced concrete arches with spans in the clear. There are massive abutments and supports on pile foundations, lined with granite. Railings in the form of a solid grey granite parapet are installed on the bridge. Granite obelisks with lanterns and gilded balls rise over at the entrances. During the bridge reconstruction its architectural design has not been survived, but its exterior appearance is not very different from the remaining Chernyshev and Staro-Kalinkin bridges, except the missing tower superstructures. On the facades of the bridge the arches outlines and ice guards profiled in the form of triangular prisms are stood out.

On September 7, 1950 pipeline laid with substandard welds caused a gas leak; upstream in the sidewalk an explosive mixture formed that exploded from a random spark damaging reinforced concrete paving slabs.

After this incident, it was decided to cap gas pipelines on other bridges in the city: Novo-Petergovsky, Komsomolsky, etc. The solid granite parapets were installed as a railing. Granite obelisks with round glass lamps on the brackets were placed on the abutments.

In 1962 tram rails on Moscowsky Prospekt on the site from the Ploschad Mira to the Obvodny Canal were removed.

In 1968 the balls were covered with leaf gold again.

In 2014 reconstruction of artistic and architectural illumination of Obukhovsky Bridge was completed. 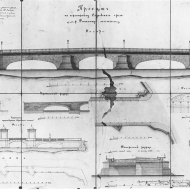 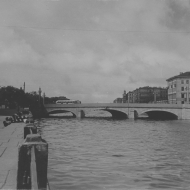 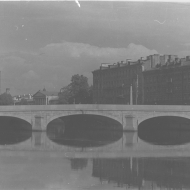 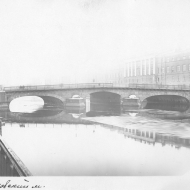