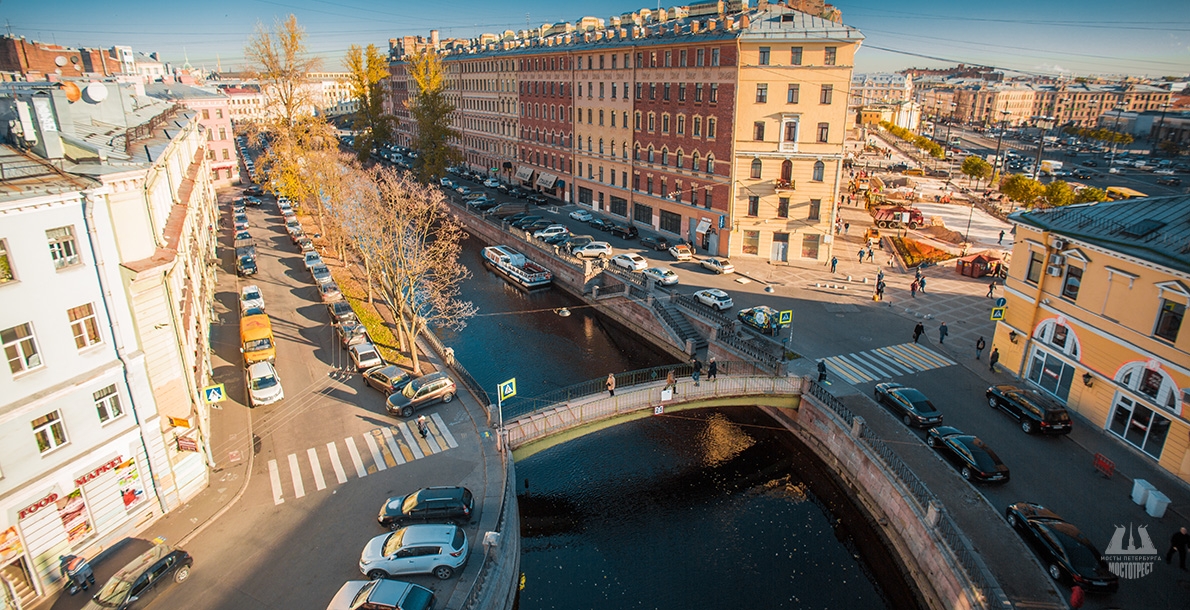 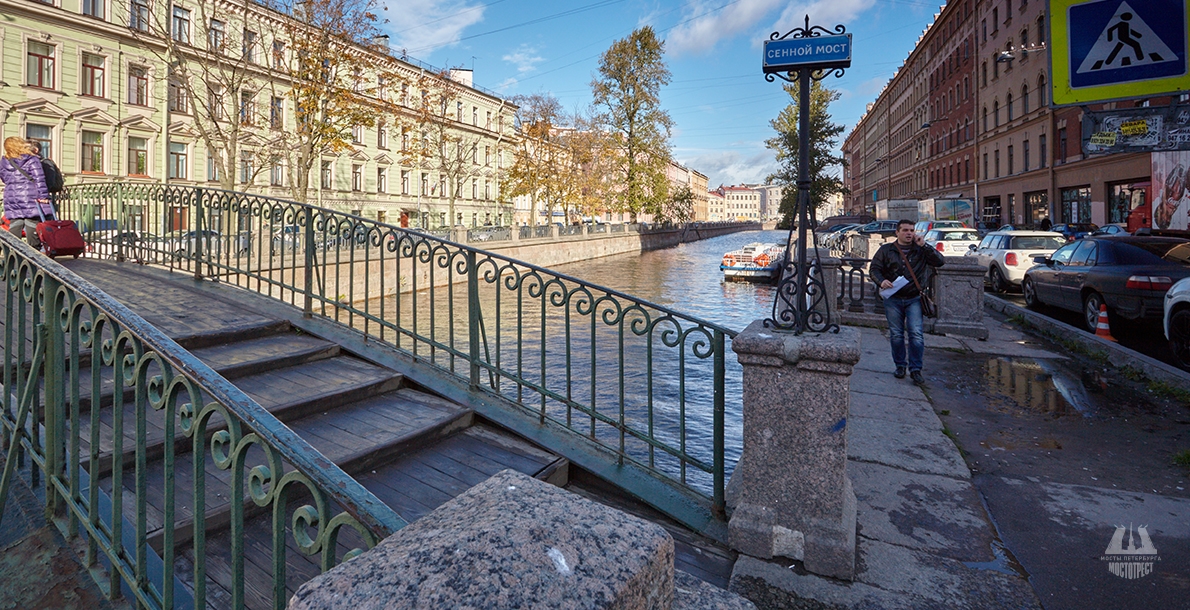 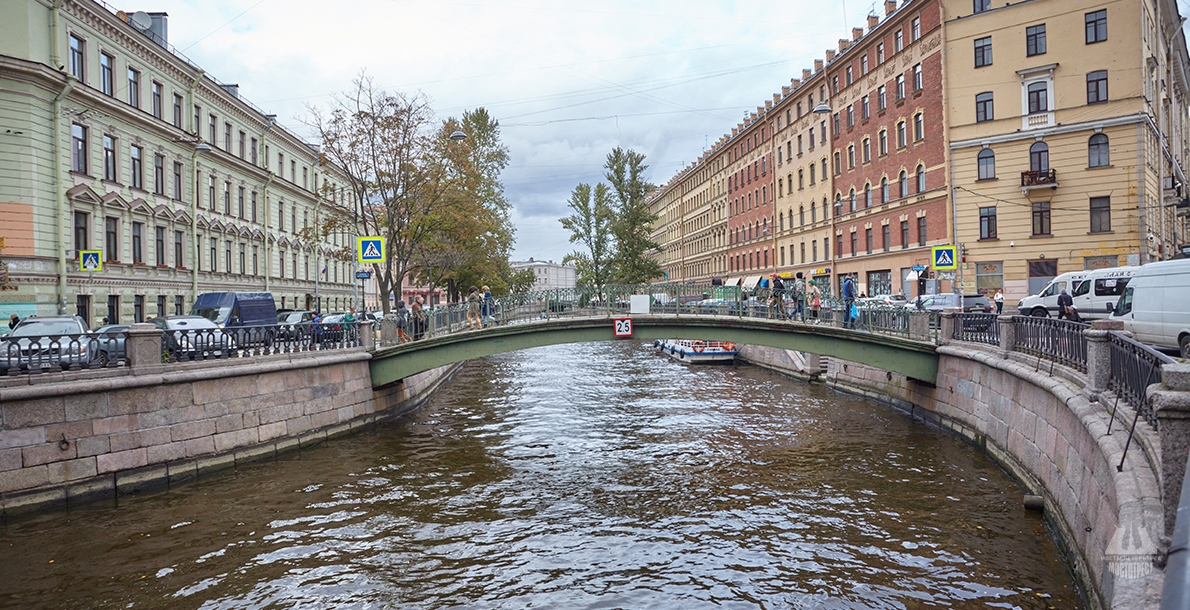 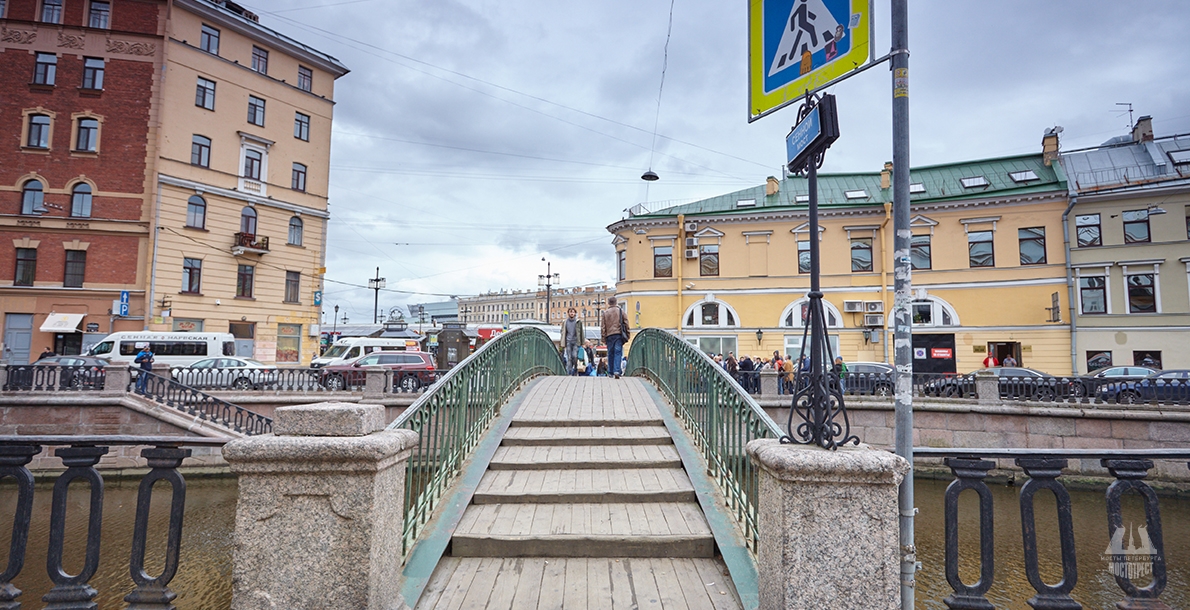 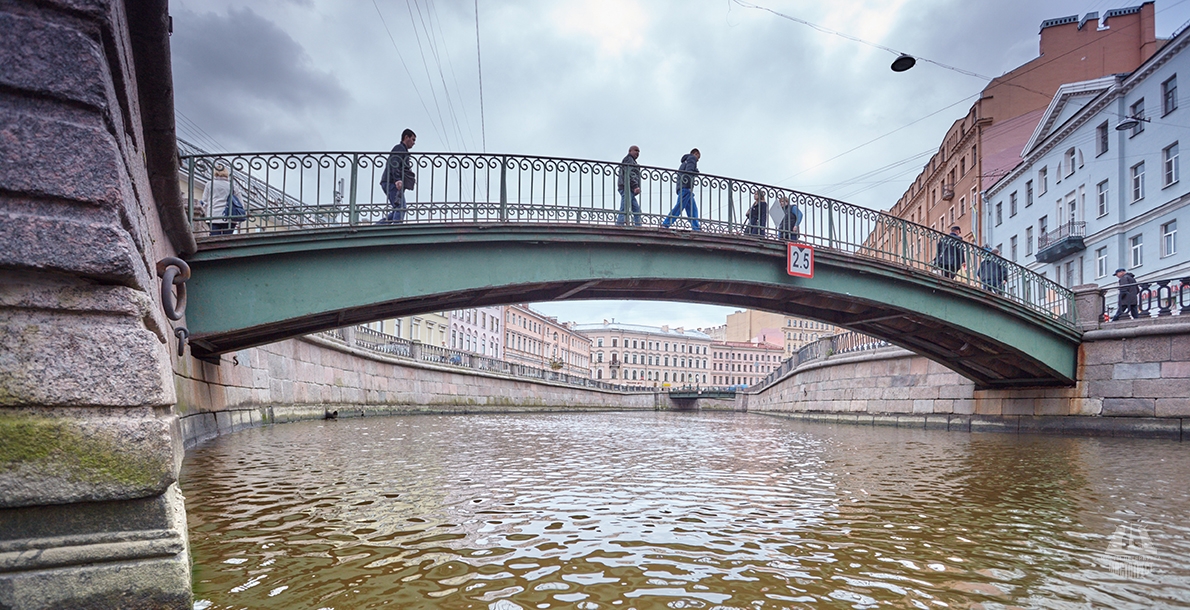 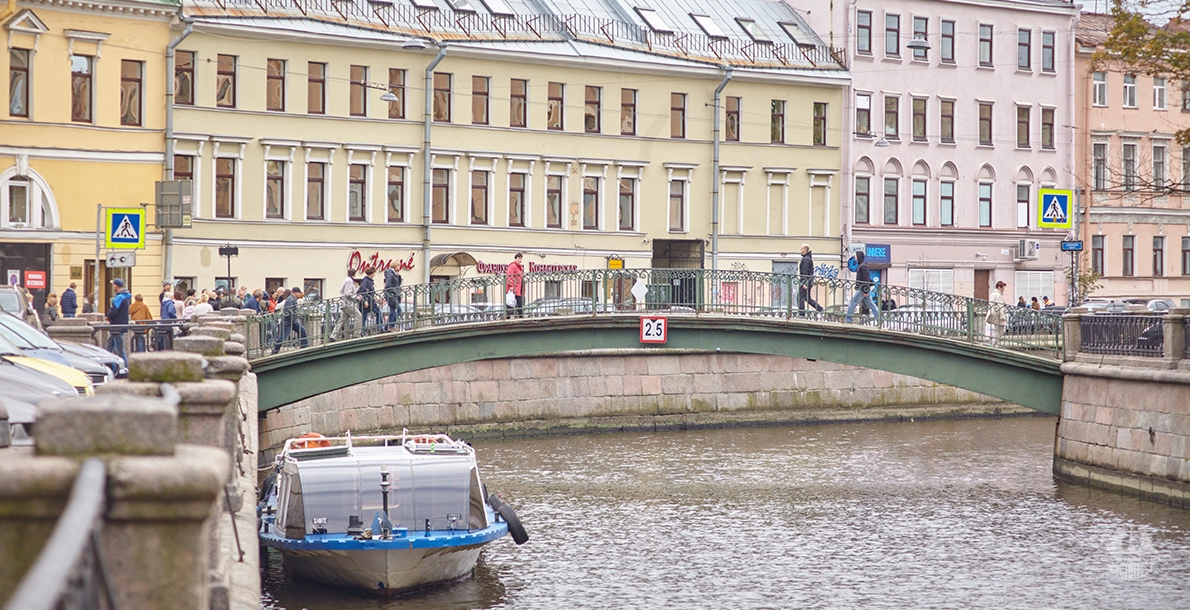 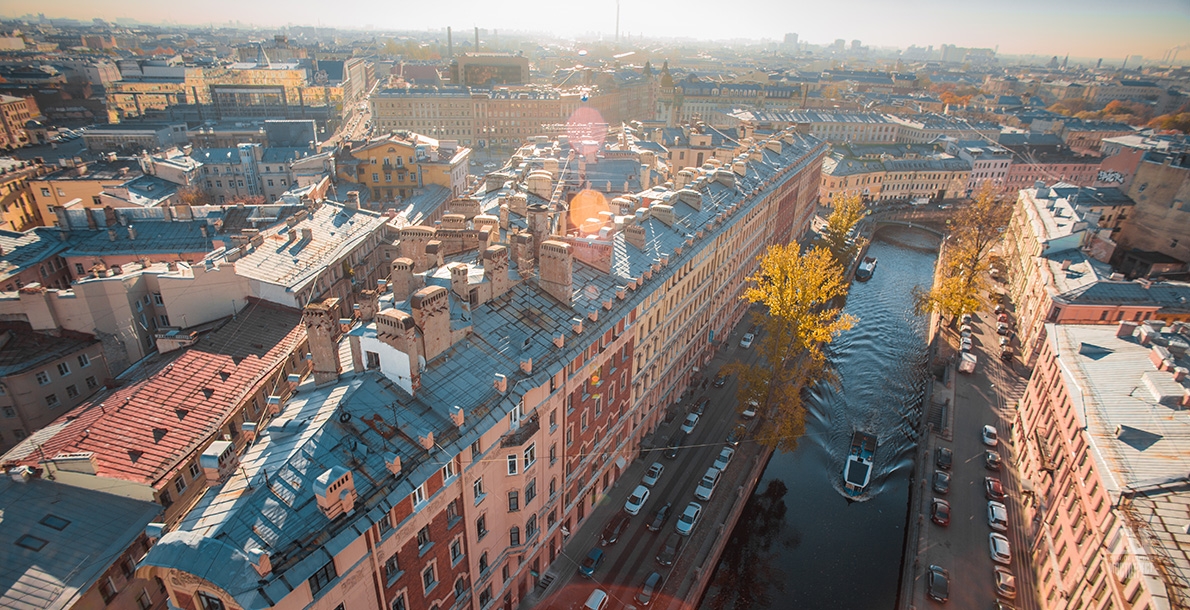 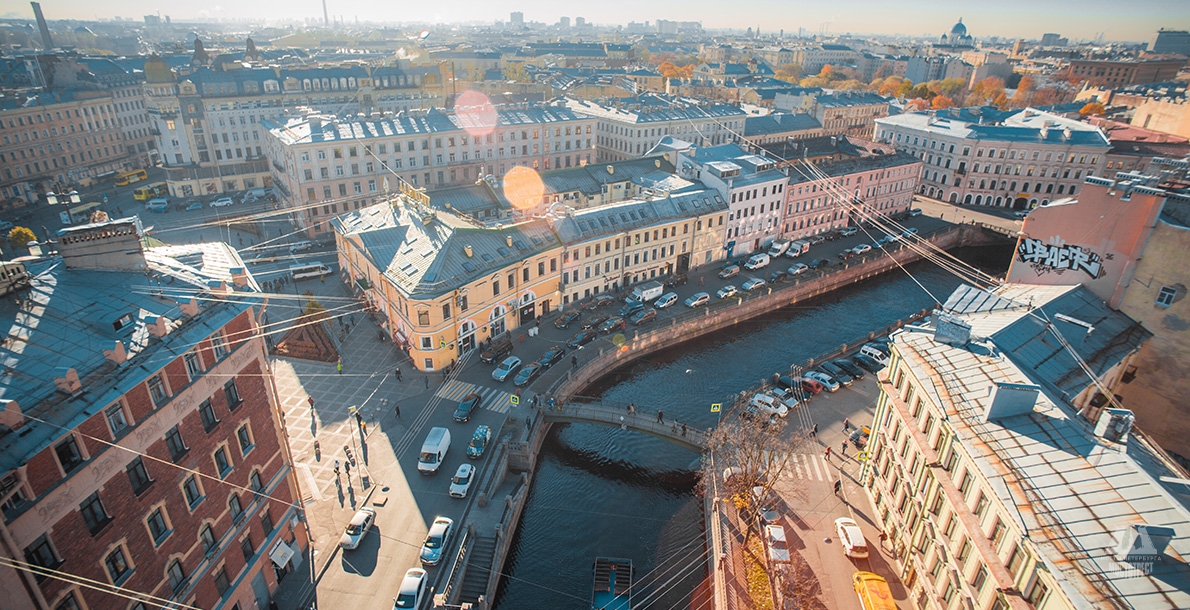 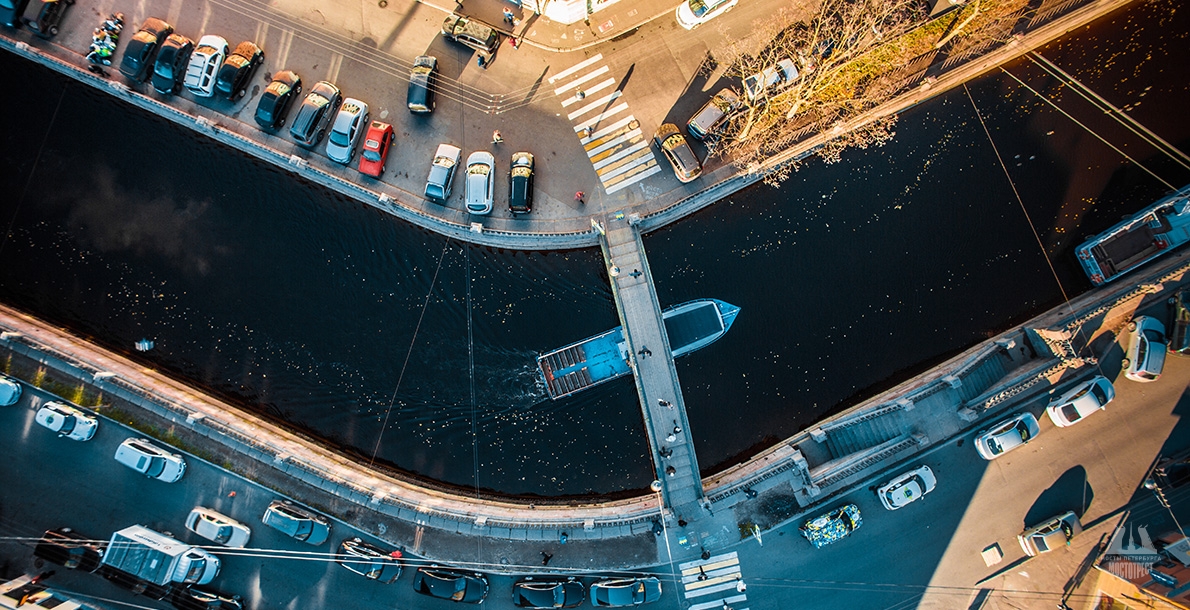 Sennoy Bridge is a pedestrian bridge across the Griboyedov Canal in Admiralty District of St. Petersburg, connects Kazansky Island and Spassky Island. It is located against Sennaya Square.

The first bridge was built there in 1931. It was a wooden pedestrian crossing using which heating pipes were laid over the canal. The bridge derived its name from the square located nearby. In turn, Sennaya (Hay) Square was named because there was a market where hay was sold.

It was a single-span simple wooden bridge. The superstructure consisted of three girders and each girder consisted of three beams. Two-heating pipes were suspended between the girders.  The pile supports of the bridge are wooden  . There is board pavement on the bridge.

After a couple of decades plank bridge became so dilapidated that the bridge was rebuilt in 1952 again. The span obtained a quite elegant form; it is equipped with two twin beams between which utilities are laid. Sleepers and timber decking are laid on the superstructure. Retaining walls of embankment are used as supports. A light railing of a simple pattern is installed on the bridge. There are wooden stages at the entrances of the bridge. On both sides on the embankment there are granite descends to the water. The bridge length is 23 meters, and width - only 2.3 meters, but it is sufficient for pedestrians.

In 1977 the bridge was repaired: some wooden members of structure were replaced.

In winter there is special protection for pedestrians on the surface of the bridge, thus, they receive additional support in the snowy weather and icy conditions.

It should be noted that Sennaya Square is the centre of St. Petersburg and therefore the bridge leading to it is never empty. Despite its primitiveness, Sennoy Bridge looks very picturesque. This is largely due to the surrounding houses. Only in the complex such a picture is obtained as if we moved in time one hundred years ago. Certainly, you can see the bridge during a water trip along the Griboyedov Canal. 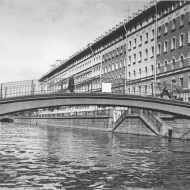