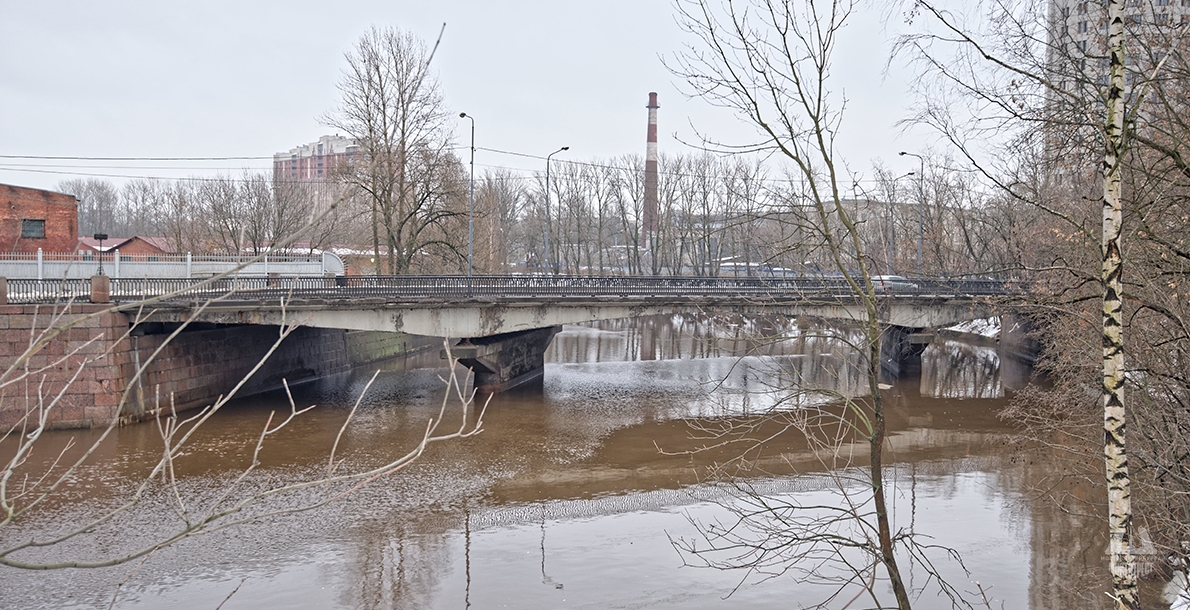 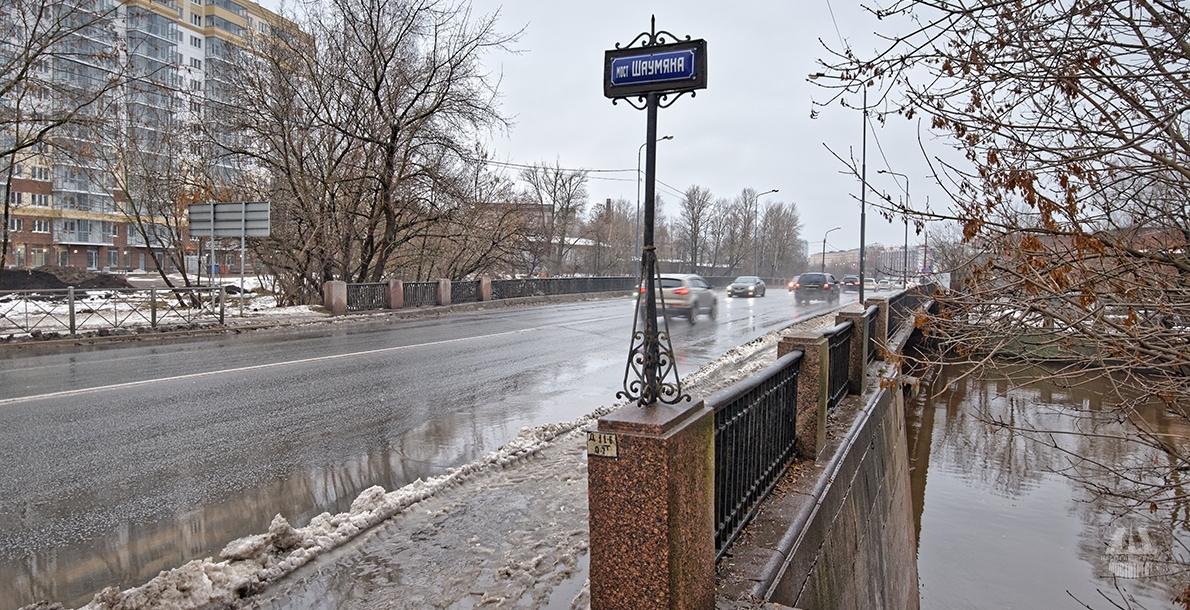 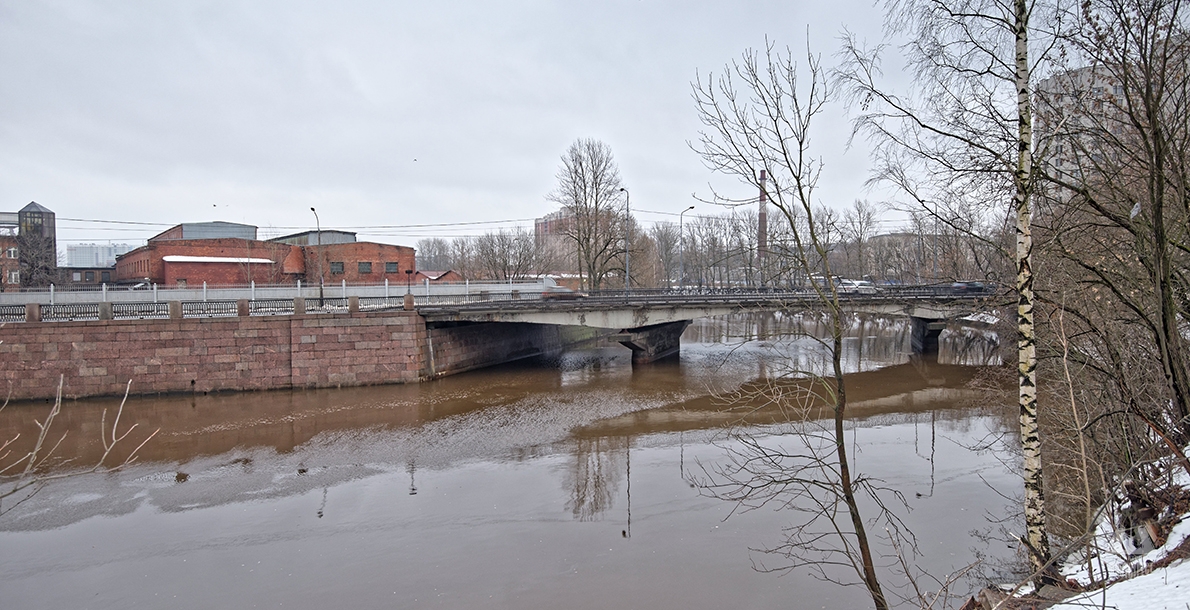 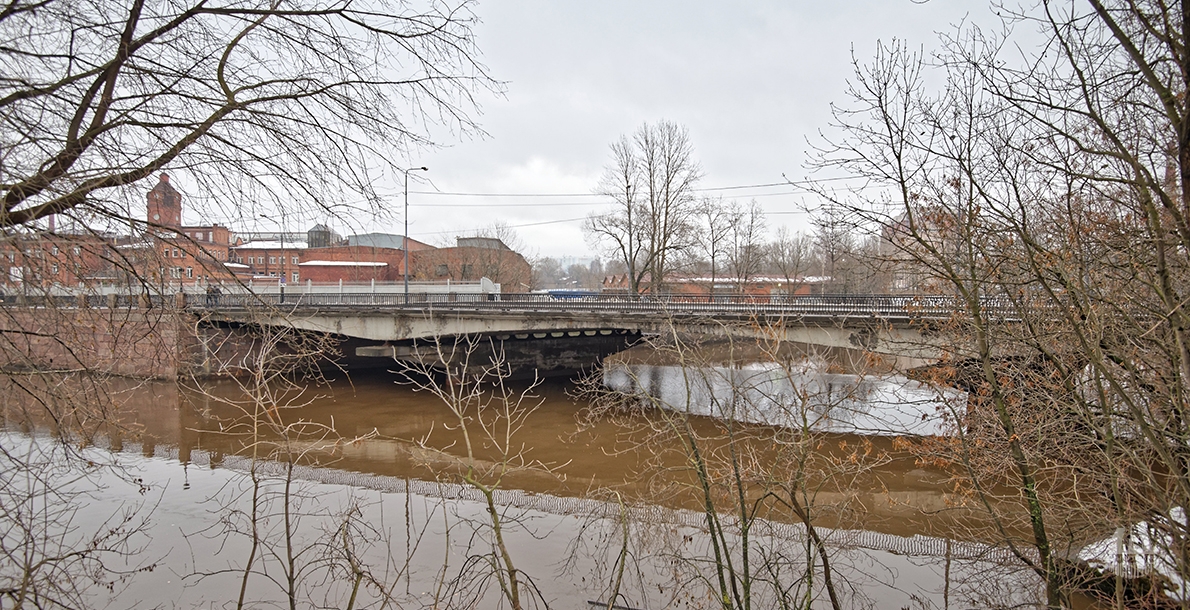 Shaumyana Bridge is a bridge across the Okhta River in Krasnogvardeysky District, located in the alignment of Shaumyan Prospect, which, as many ways in new areas, appeared with residential development of this territory. This is one of 14 bridges across Okhta.

The crossing was built in 1966-1968 under the project of Lengiproinzhproject’s Engineer P.P. Ryazantsev and Architect L.A. Noskov. It got its name in 1968 after the name of Shaumyan Prospect. The prospect, in queue, is called in memory of one of 26 Baku commissaries, Stepan Georgiyevich Shaumyan (1878-1918).

This bridge is three-span reinforced concrete simple bridge. This is a slope bridge with the slope angle of 51 degrees. The bridge superstructure is made of reinforced concrete I-shaped beams with curved outline of the bottom chord. By its structure it is similar to the bridges along Energetikov Prospect across the Bolshaya Okhta River and Gutuyevsky Bridge across the Obvodny Canal but differs from them by availability of counterweights on end beams, for which wells are provided in abutments.

The abutments are massive ones, made of monolithic reinforced concrete on pile foundation and faced with granite.

Stair descents to the water and Low concrete retaining wall, faced with granite, are constructed at left-bank abutment.

Right-bank approach to the bridge is strengthened with high reinforced concrete retaining wall on piled foundation; faced with granite. The roadway is covered with asphalt concrete pavement; sidewalks – with sand asphalt. The sidewalk is separated from the roadway with concrete curb.

Art casting iron railing with granite tombs was installed on the bridge.

The Okkervil River, coming from bogs to the south-west of Koltushy Heights in Leningrad Region, runs into the Okhta River and passed across two city districts, Nevsky and Krasnogvardeysky.