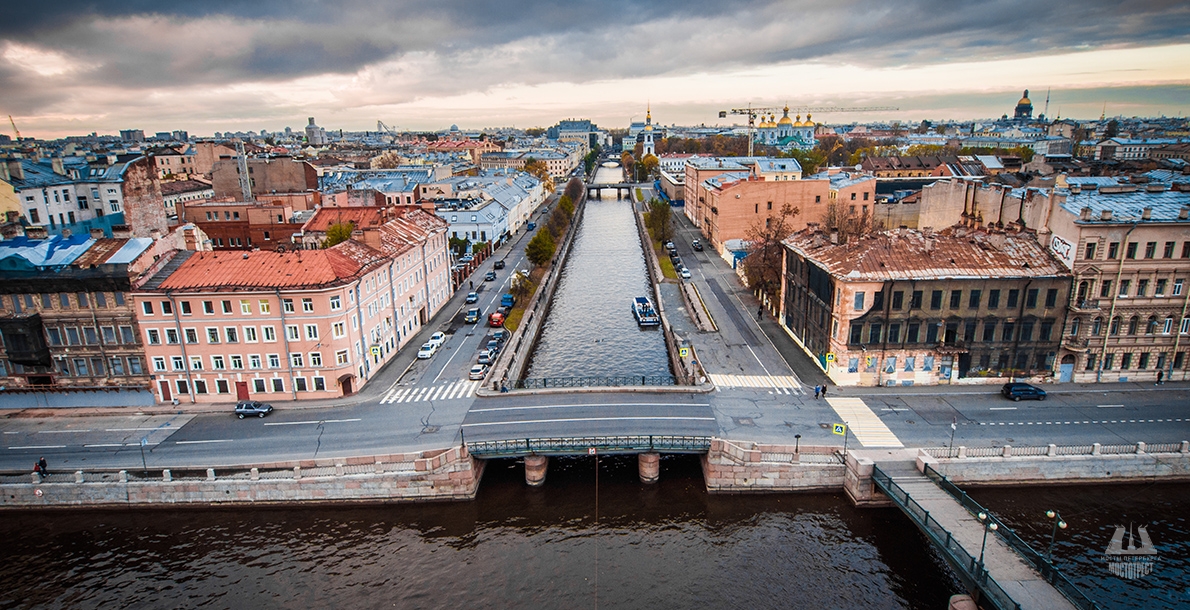 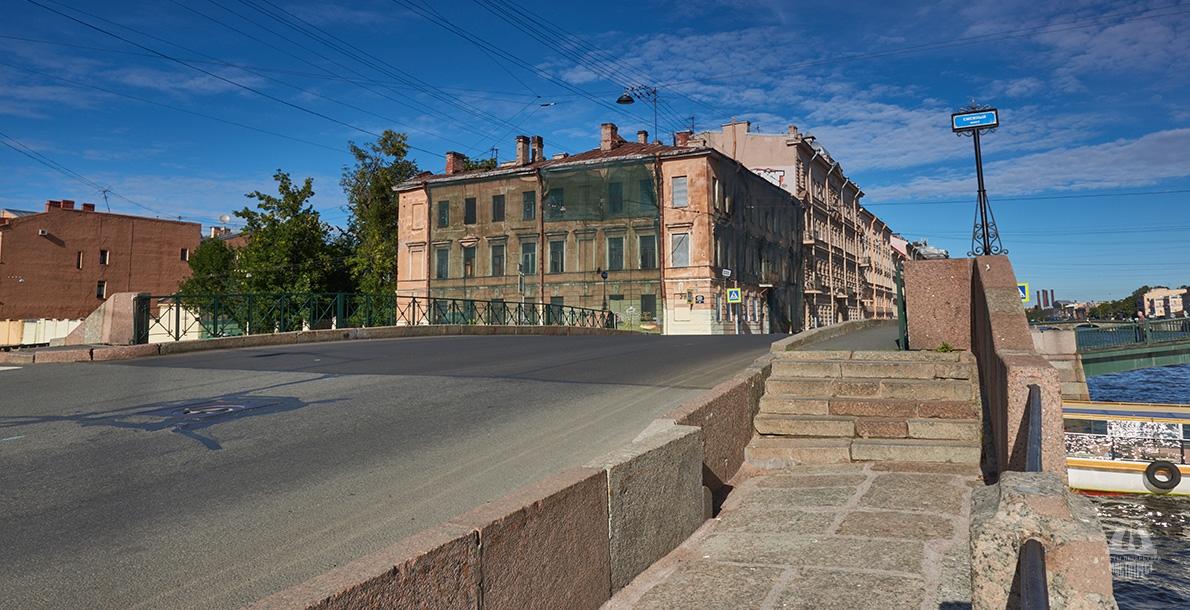 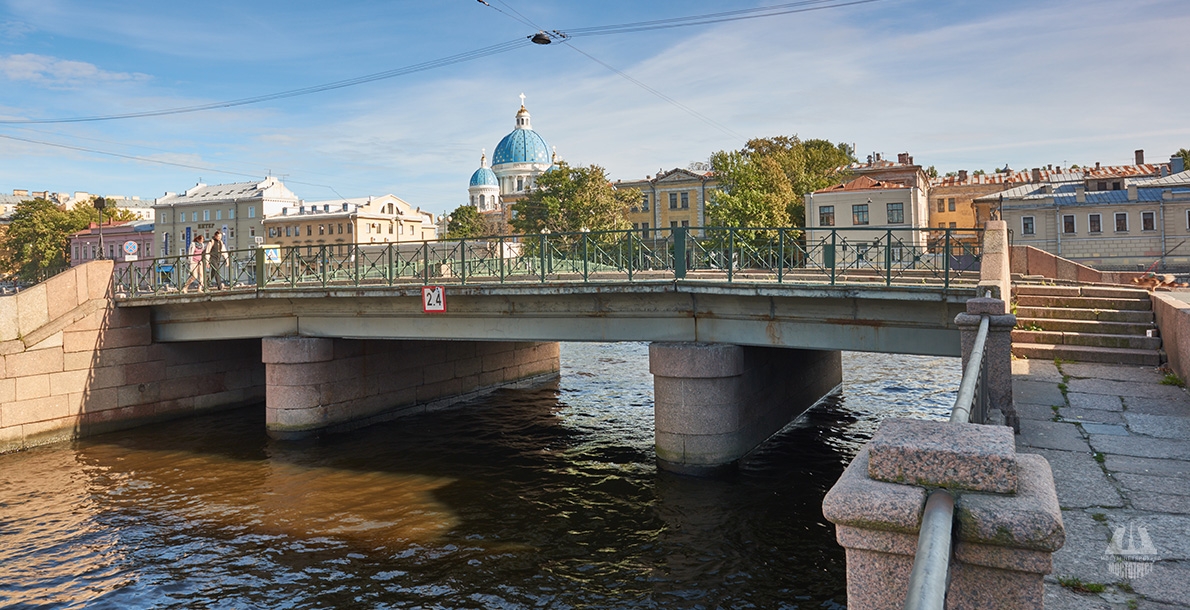 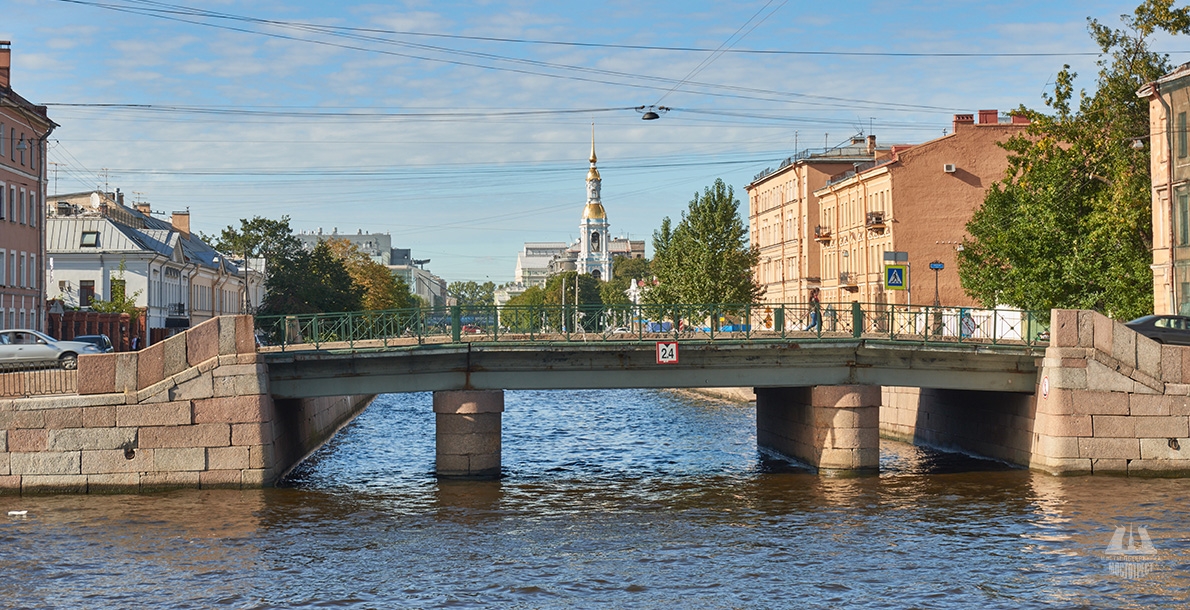 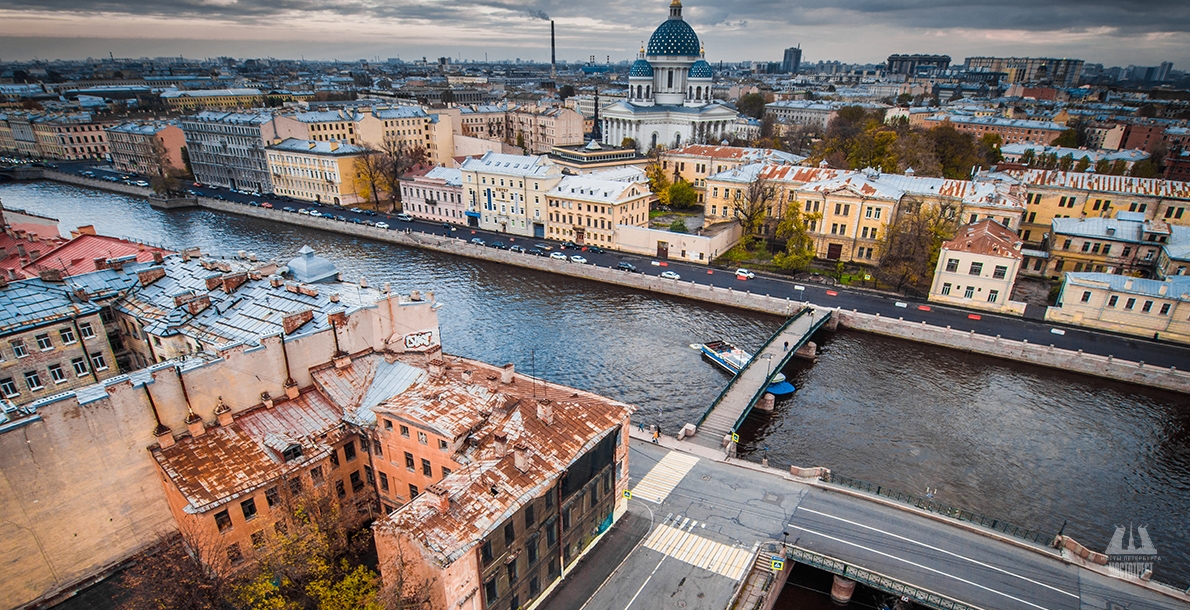 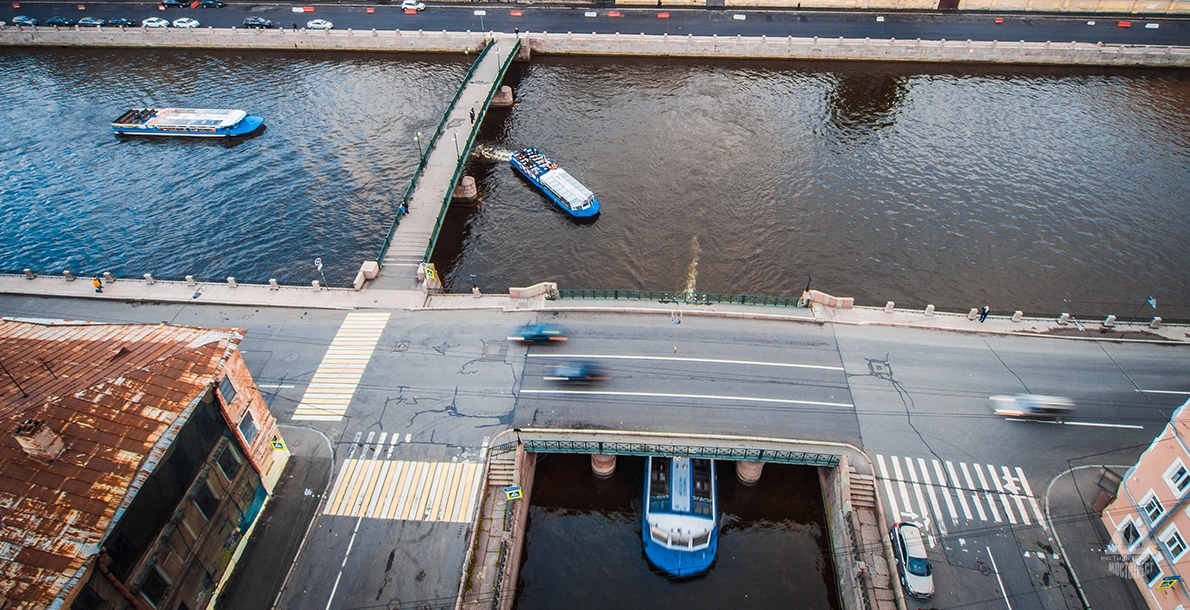 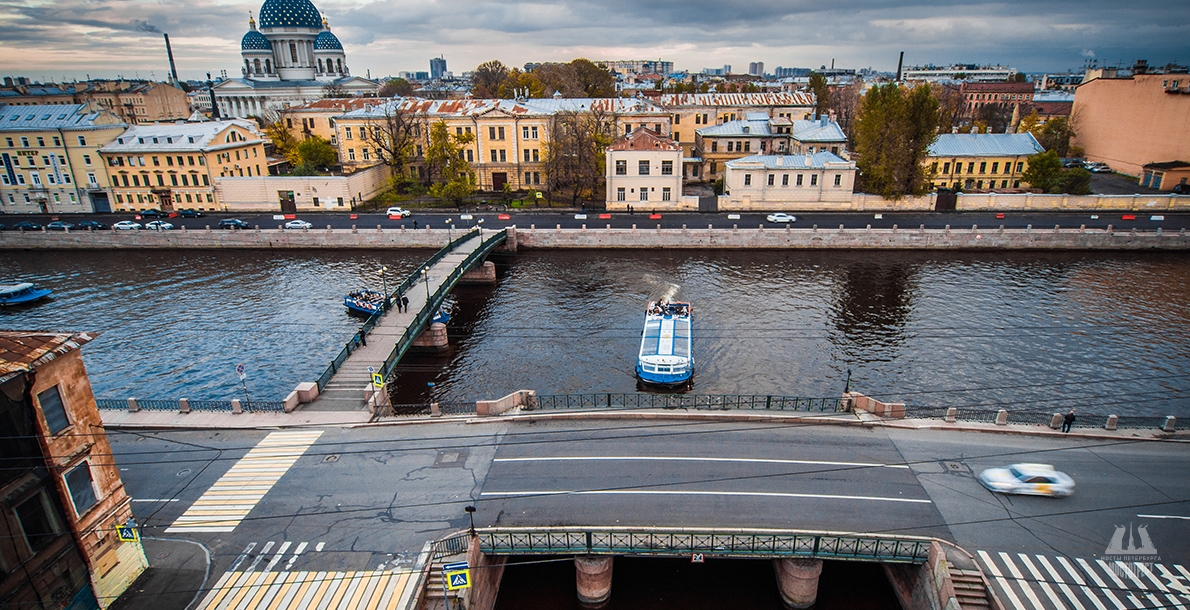 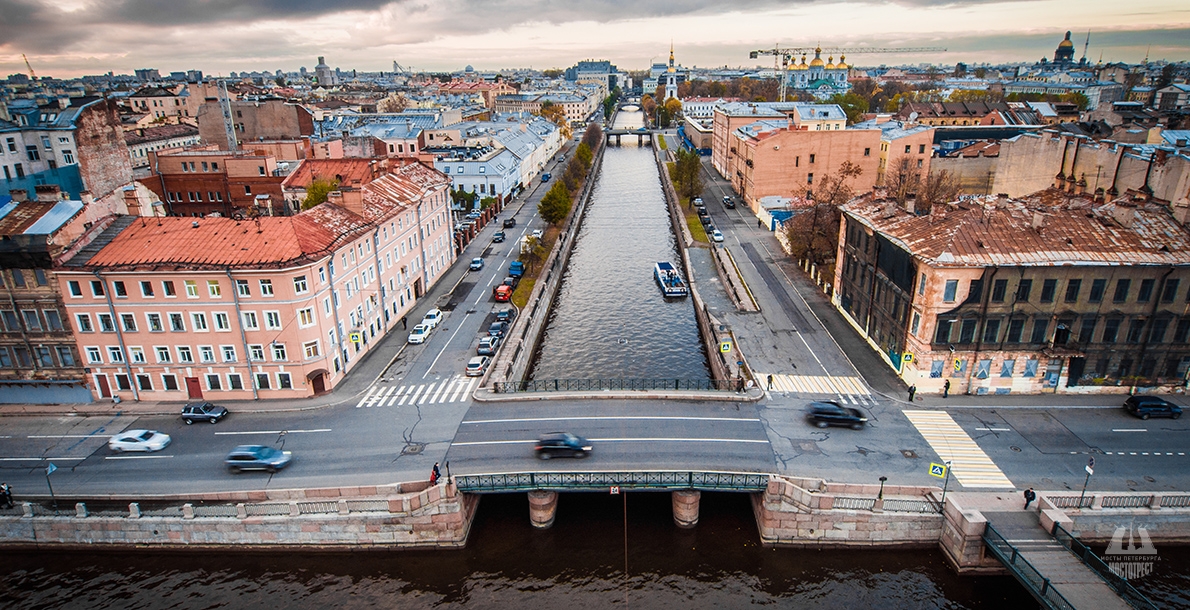 Smezhny Bridge (former Kryukov, Nikolsky, Naberezhny – 1821-1822, Soedinitelny – 1849-1875) is a bridge across the Kryukov Canal in Admiralteysky District; it connects Spassky and Pokrov Islands and located in the mouth of the Kryukov Canal, along the embankment on the right bank of the Fontanka River. Its name is connected to location in the place of two water streams integration.

Constructed here in 1782-1787, the first wooden bridge was reconstructed in 1800-1810 after standard bridge project, which was previously used to construct all six bridges across the Kryukov Canal. The bridge is three-span bridge with a wooden span structure on stone supports faced with granite with simple metallic grid. Roadway and sidewalks are with wooden pavement.

In 1867 wooden girders of the superstructure were replaced by new ones.

In 1888 the bridge was completely repaired with replacement of wooden superstructures by metallic ones and supports installation up to water level. In the course of repair, figured granite obelisks with lanterns above river supports were liquidated.

By 1940 when traffic, passing through Smezhny Bridge, has increased significantly, it was decided to strengthen and reinforce it. Superstructures were strengthened by welding metallic sheets on to upper and lower belts of I-shaped beams. Three-span simple system was preserved.

In 1964, due to necessity of heat-extraction tubes laying underneath the bridge, it was reconstructed under the project of Ye.Ye. Rozenfeld. The bridge remained three-span simple bridge with metal superstructure. The bridge abutments made from reinforced concrete, faced with granite, on pile foundation, at one level with embankment wall. Roadway is reinforced concrete slab with asphalt concrete pavement. Railings are metal forged, of a simple pattern. There is a granite curb.

Some architects think that using of very high superstructures led to historical image deterioration and violation of architectural forms with adjacent embankment sections.

In 1980 the bridge was repaired; within repair, concrete curb was replaced by granite one; also, metallic superstructures and railing were painted.