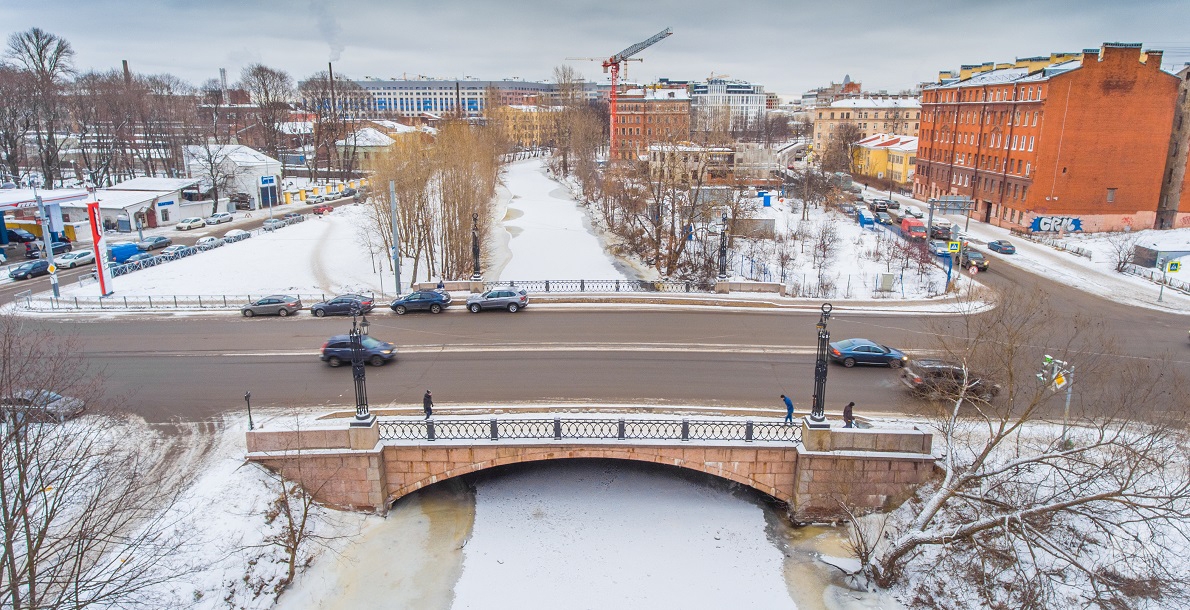 Smolensky Bridge (former Nemetsky) is a bridge across the Smolenka River in Vasileostrovsky District; it connects Vasilyevsky Island and Dekabristov Island. The bridge is located in the alignment of lines 16-17 of Vasilyevsky Island.

The bridge got its name from the Smolenka River, which called Glukhaya before the middle of the 18th century and than became Chornaya.

The river, as the Orthodox cemetery and the church, located here, has got its name in memory of the first Saint-Petersburg builders, originally came from Smolensk province. For the first time, the river called Smolenskaya and than Smolenka.

Since 1799 there was a wooden bridge, which was repaired in wood several times.

In 1930, due to tram roads installation, the bridge was strengthened. The timber girders were replaced by metal I-beams. The superstructure and supports bridge were still made of wood.

In 1959-1961, under the project of engineer A.D. Gutzeit and architect L.A. Noskov, wooden bridge was rebuilt in a single-span arch reinforced concrete bridge. The superstructure represents two-hinged solid arch of circular outline. The superstructure facades are faced with granite. The bridge abutments are massive reinforced concrete ones on pile foundation and faced with granite.

Art casting iron railing with granite tombs was installed on the bridge. Lantern stands in the form of spears tangled with coronals are installed in approaches.

The bridge is designed for the traffic of cars and pedestrians. The roadway of the bridge allows four lanes for vehicles. Roadway and sidewalks pavement is asphalt concrete. Sidewalks are separated from roadway by high granite parapet. By architectural forms, it is similar to Krasnooktyabrsky Bridge across Obvodny Canal.

In 2002, due to tram traffic termination on adjacent streets, tram ways were dismantled on the bridge with further recovery of hydro insulation and asphalt concrete pavement.