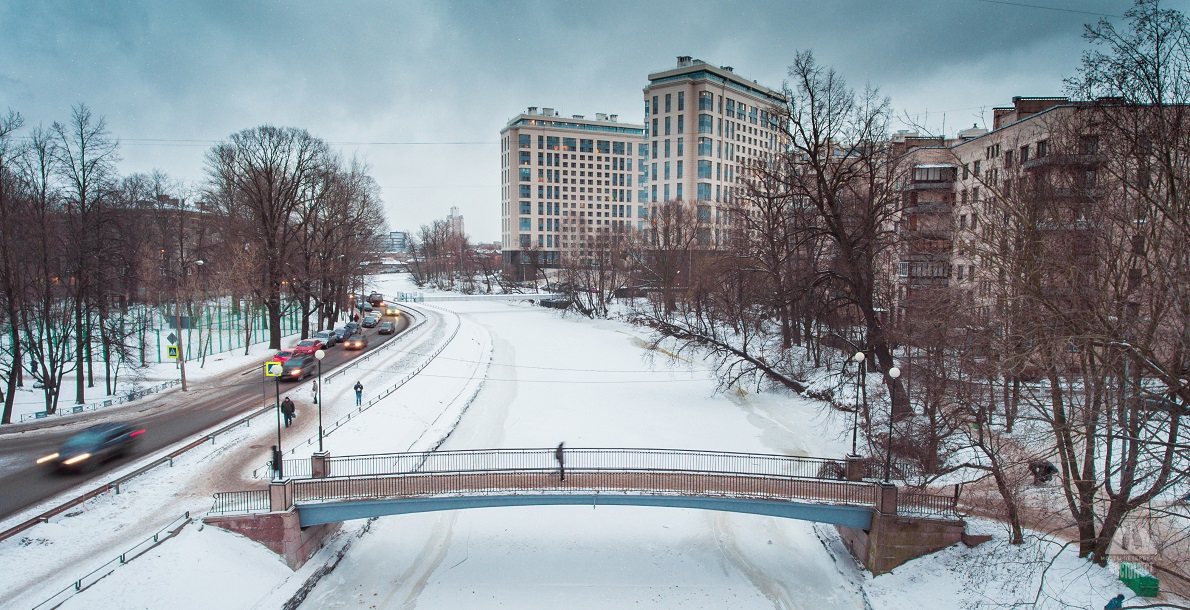 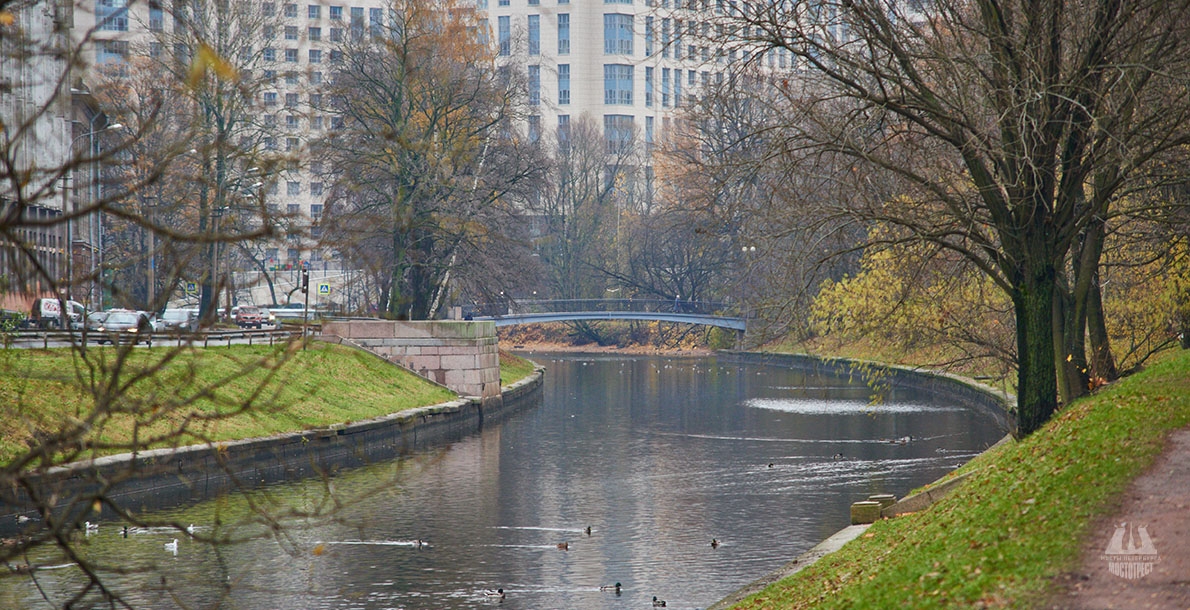 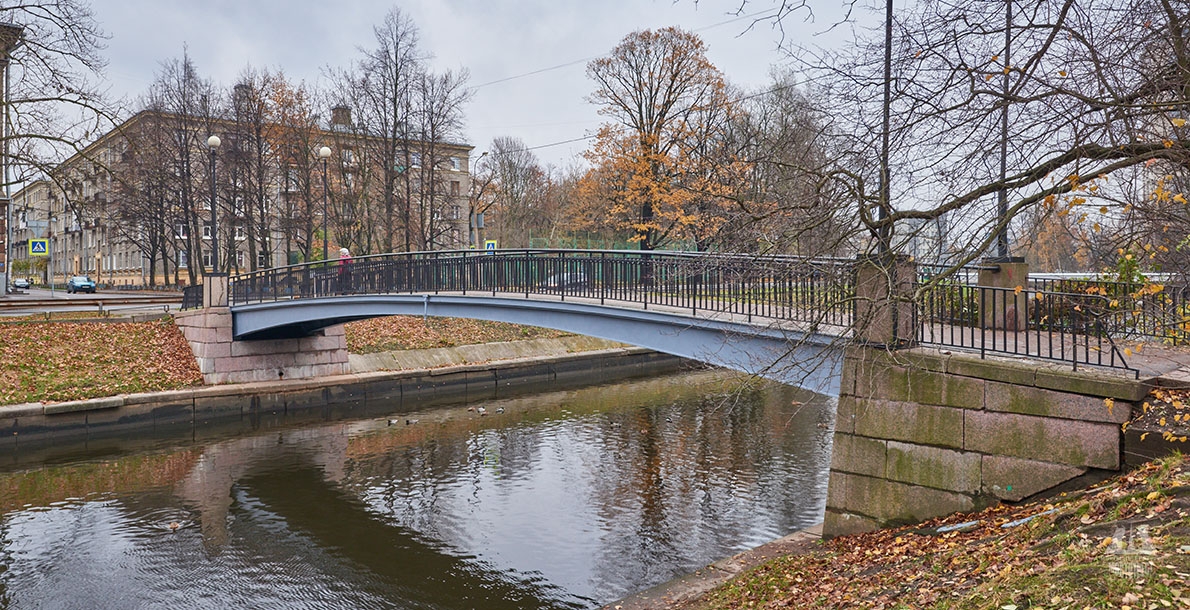 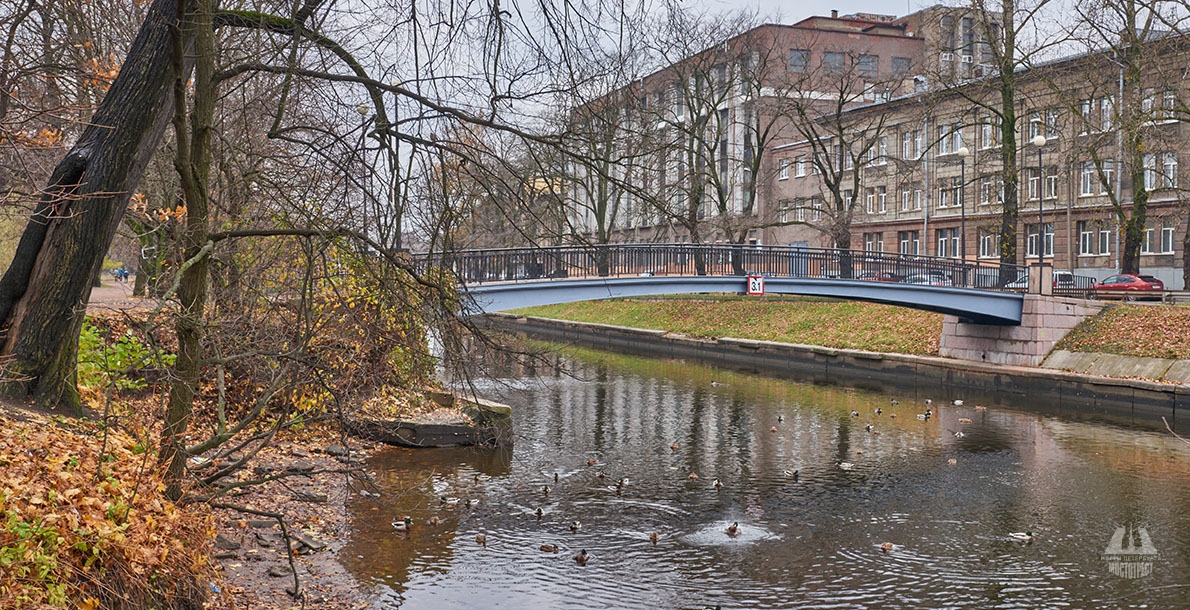 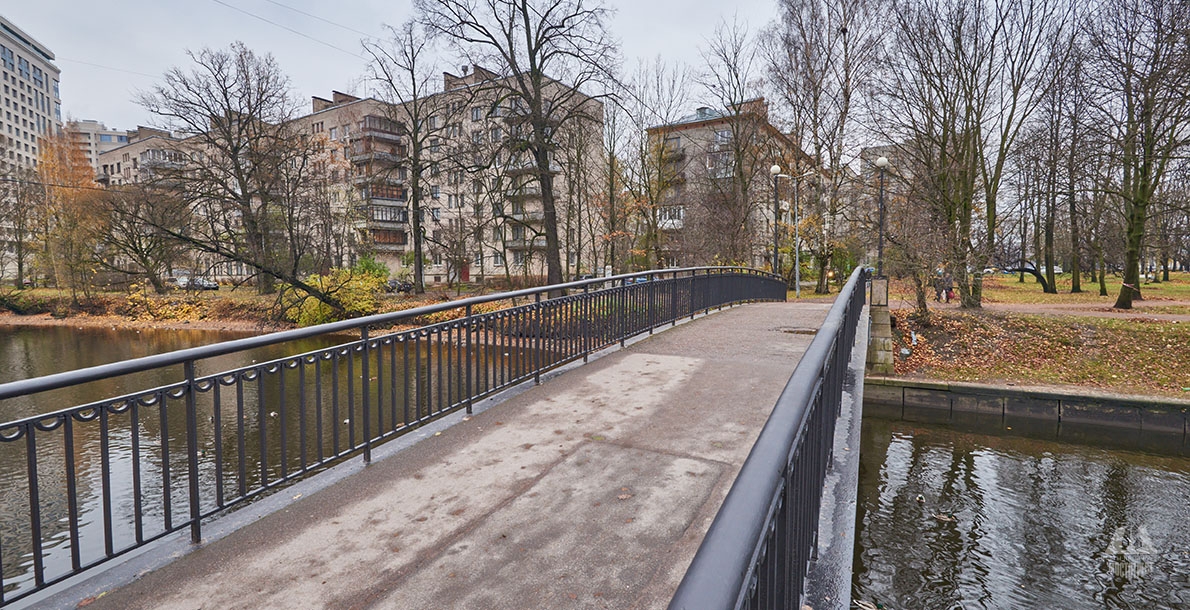 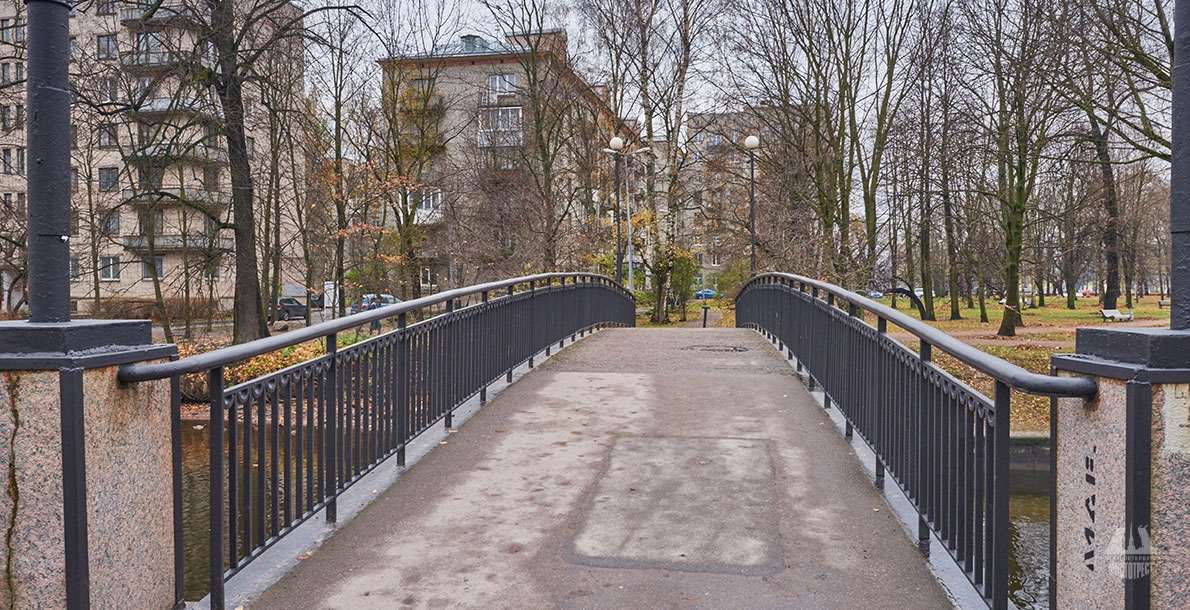 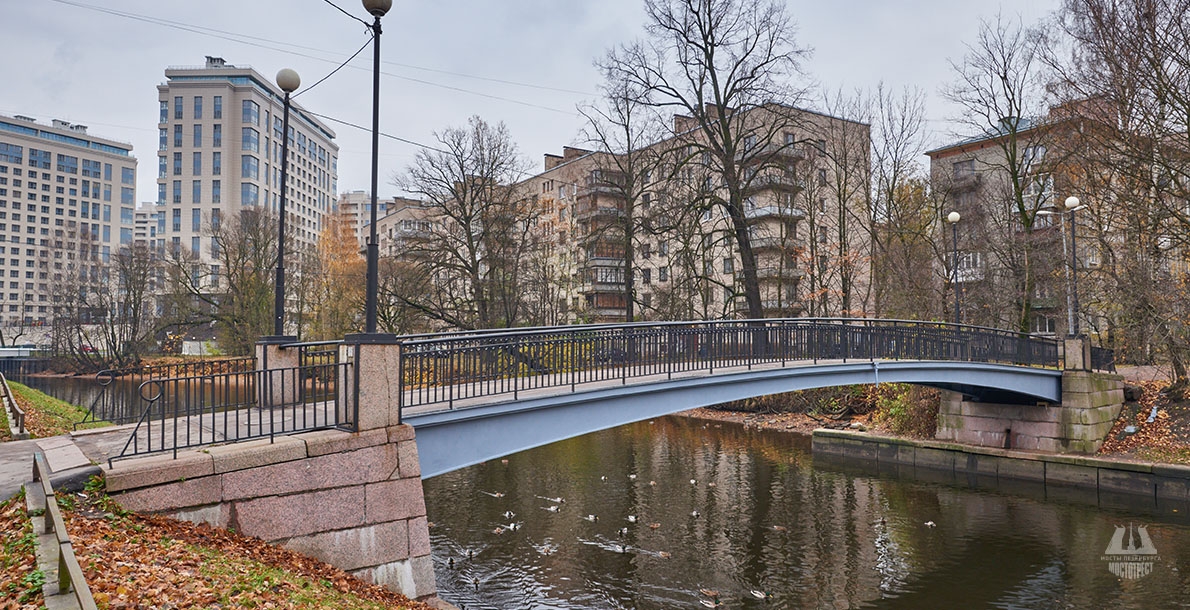 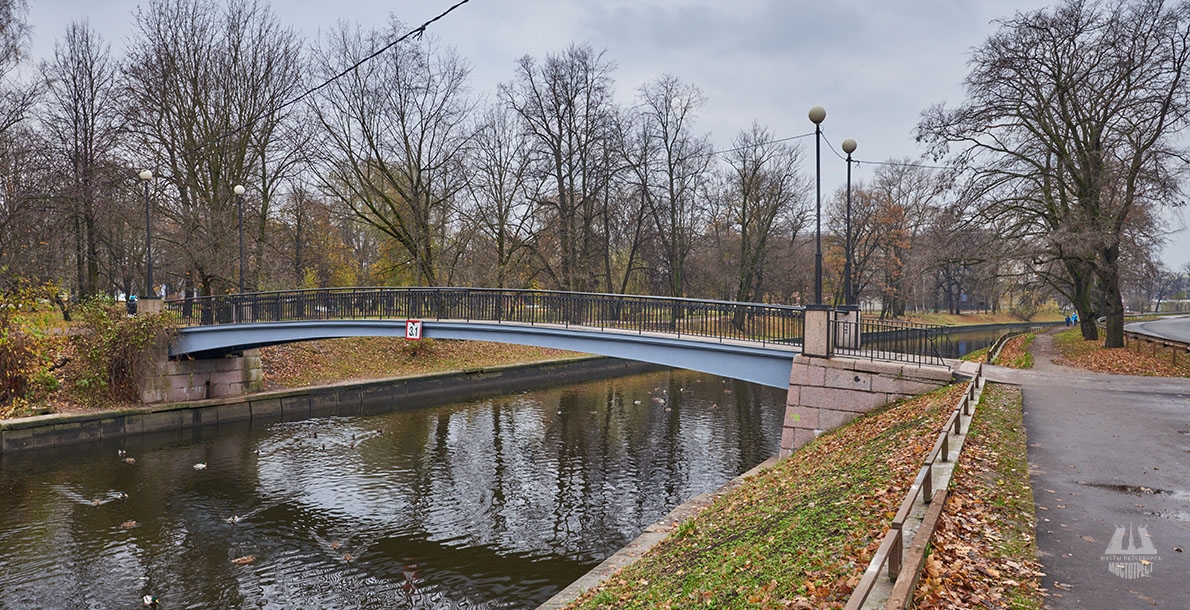 Stroganovsky (Grafovsky until 2010) Bridge across Chornaya River is located in the alignment of Grafov Street in the entrance to Stroganovsky Park (former garden of Count Golovin) in Primorsk District. Before 1977, there was no bridge here.

The bridge is constructed under the project by Lengiproinzhproject’s engineer, A.I.Rubashov. It is intended for pedestrians. The bridge is a single-span metal simple bridge with pre-stressed beams. The superstructure consists of two metallic beams with curved outline of the bottom chord interconnected by metallic ribbed slab. The beams are resiliently clamped in abutments that enabled regulation of forces in a beam and torque decrease due to own weight in the middle of span, as well as creating light bridge structure.

The bridge abutments are made of reinforced concrete, piled, and faced with granite. Simple welded metallic grids and metallic supports on granite pedestals with standard park luminaires are installed on the bridge.

In the beginning of 2010 Grafovsky bridge got the name Stroganovsky. This name is connected to Stroganov’s family, whose estate (Stroganovskaya Dacha) was located to the south of the bridge in the 18th-19th centuries.

Stroganovskaya Dacha is the area in Vyborg Side of Saint-Petersburg, close to Chornaya River entrance to Bolshaya Nevka; form the middle of the 19th to the beginning of the 20th century it was possessed by counts-barons Stroganovs. It is limited with Bolshaya Nevka from the south, Chornaya River from the east and north and park at Saltykova Dacha from the west. The owners called this area ‘Madurov Farmstead’. All stroganovs holidays, known to all contemporaries, were arranges here. French she-painter, Viges-Lebrainne, lived in Saint-Petersburg in 1790s, provided description of one of them: “Many boats were coming from each side…Around three o’clock we cane to the terrace surrounded with columns, where the day was around us from all sides. From one side one can enjoy with park view, from the other with Neva overloaded with thousands of boats, one more elegant than another… On this terrace we had a dinner. The dinner was splendid… As soon as we took our seats, the music became audible. Iphigenia overture was played in a charming manner…After the dinner, we had an unforgettable walk along the garden, in the evening we again came to the terrace, from where we watched a beautiful firework prepared by Count. Fires reflected by Neva waters, made a magnificent effect”.

It’s notable that in 1836-1952 the bridge across Bolshaya Nevka, currently called Ushakovsky, bore the name Stroganovsky.