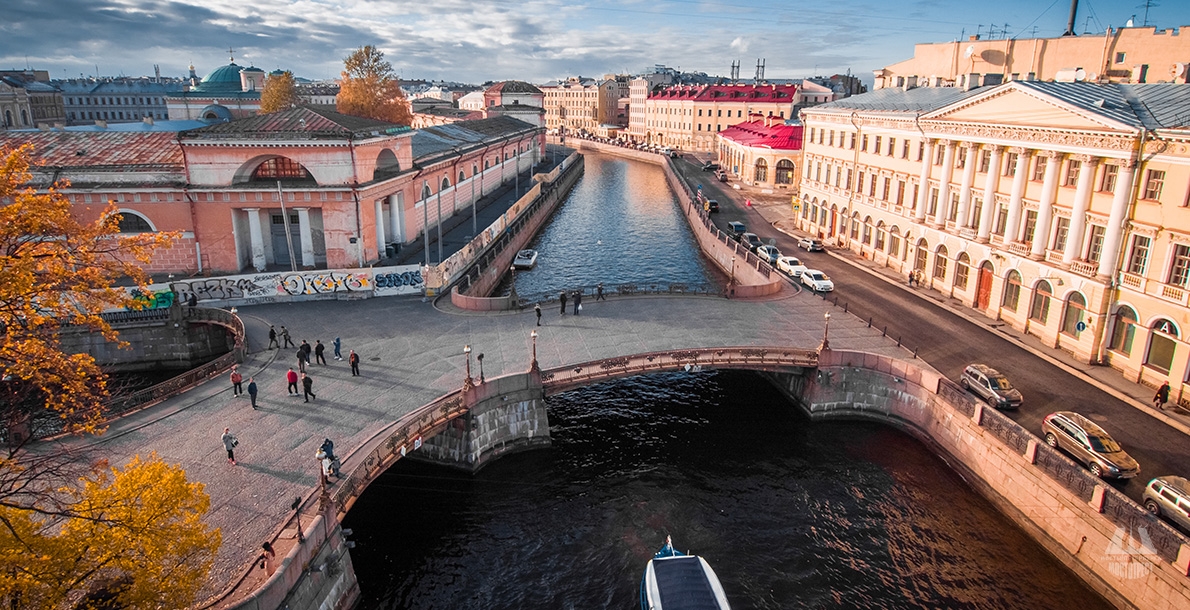 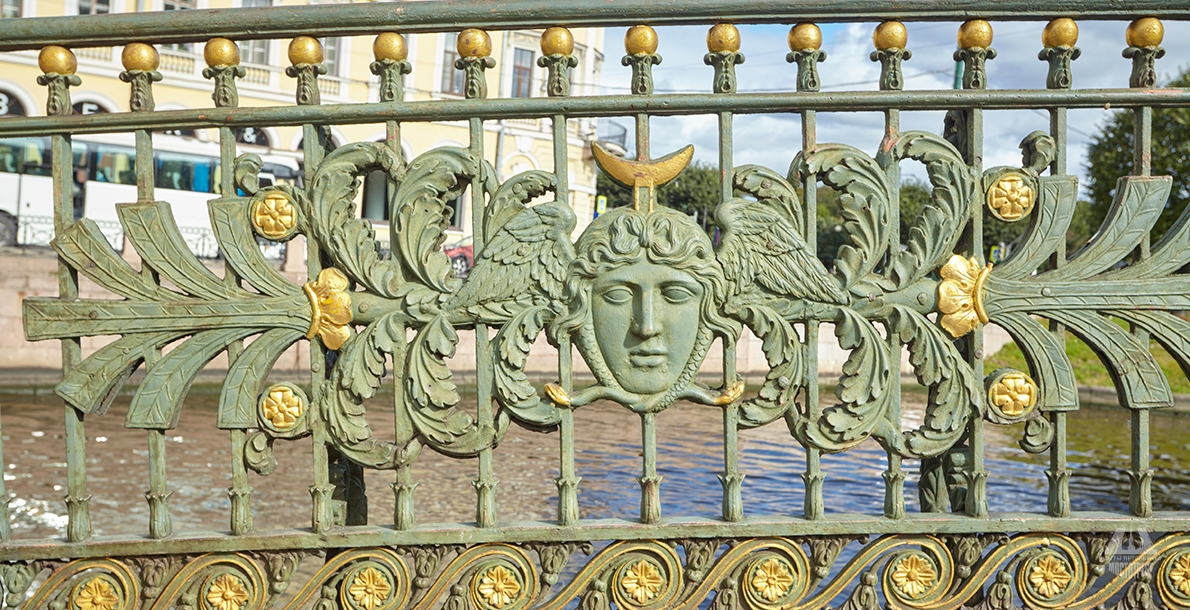 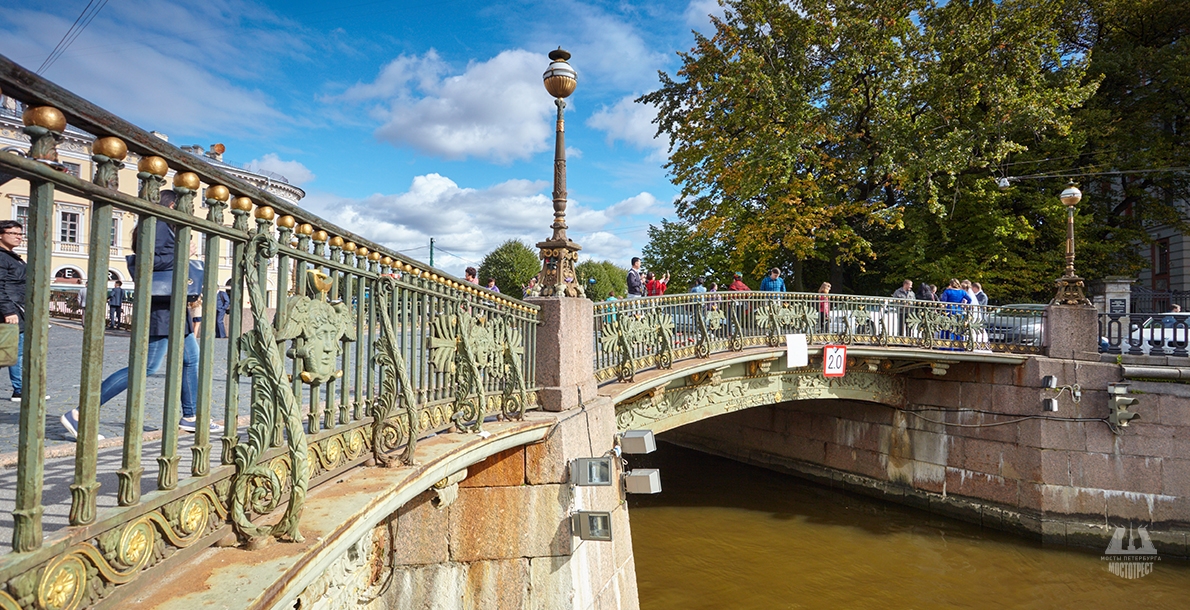 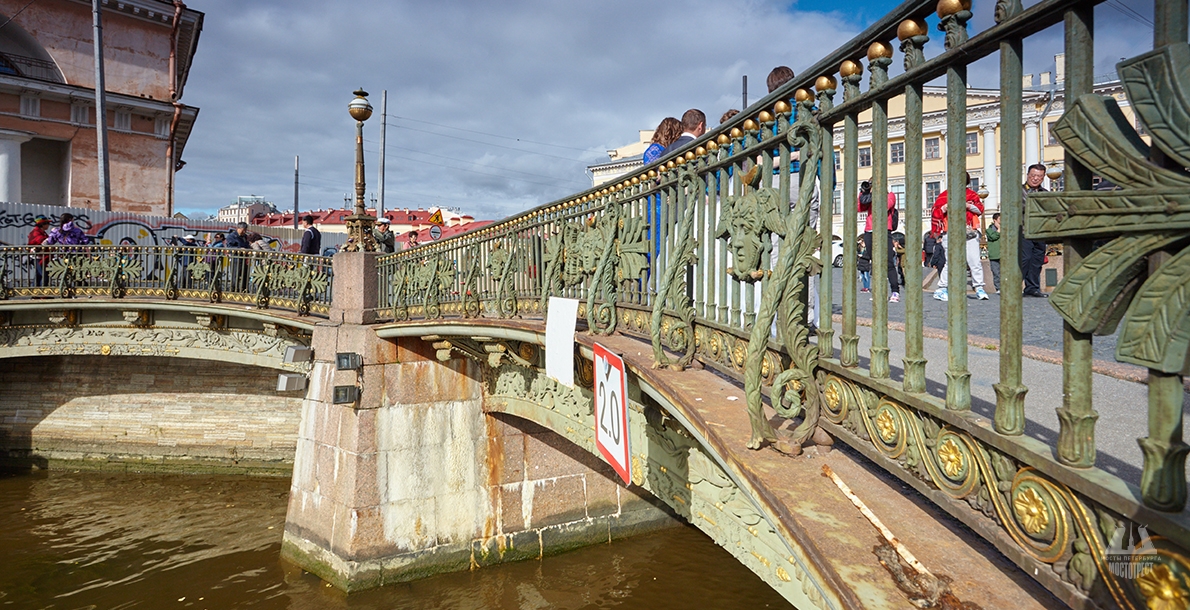 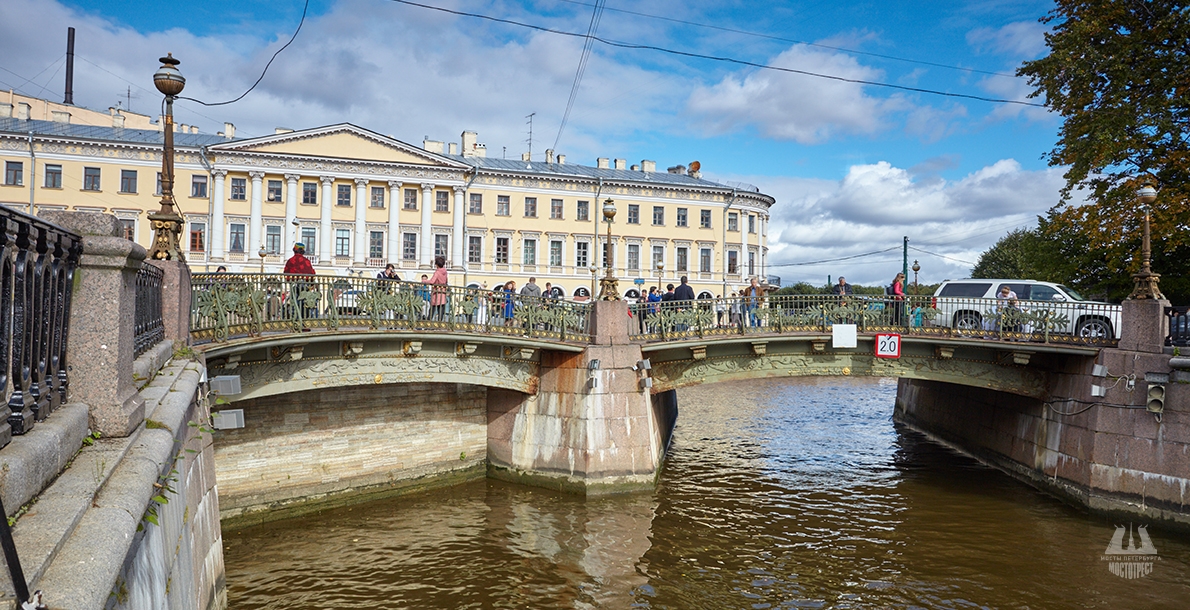 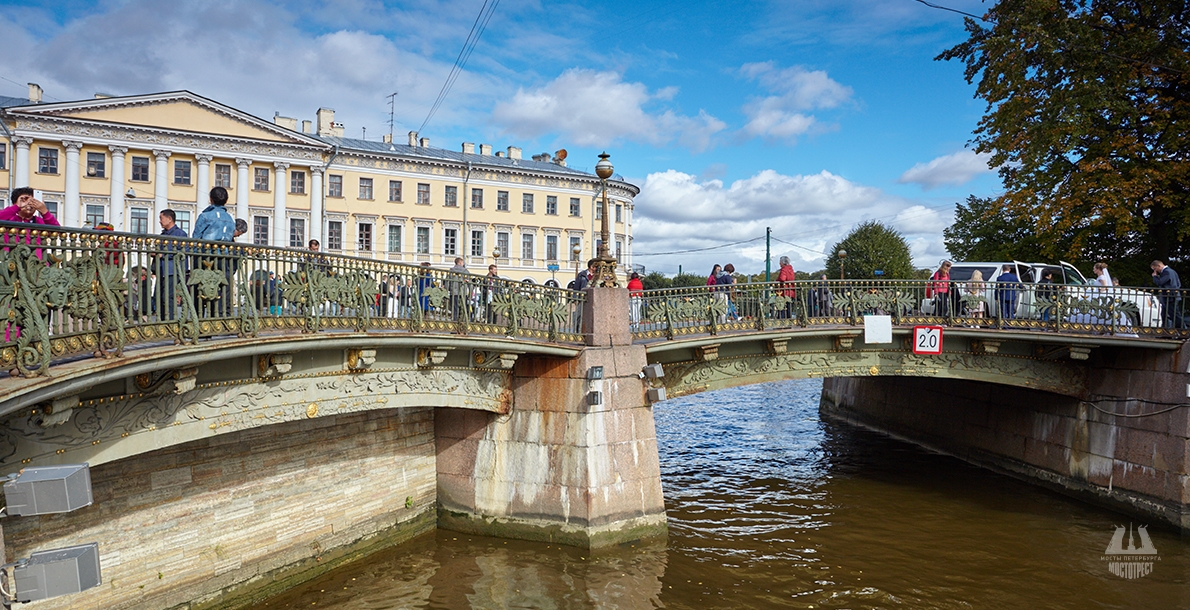 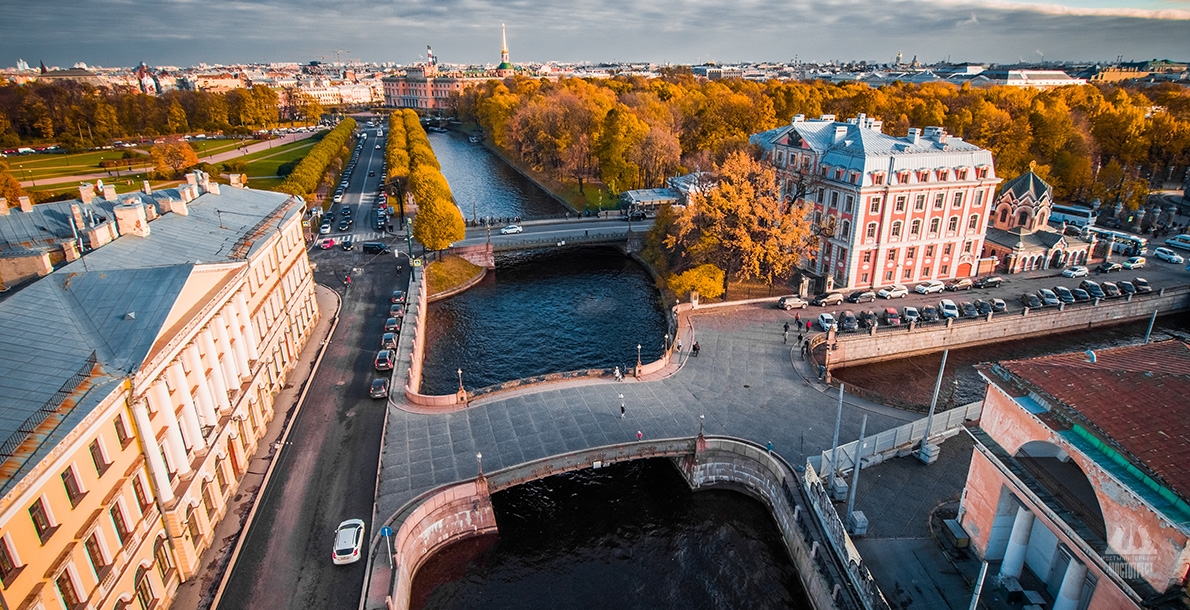 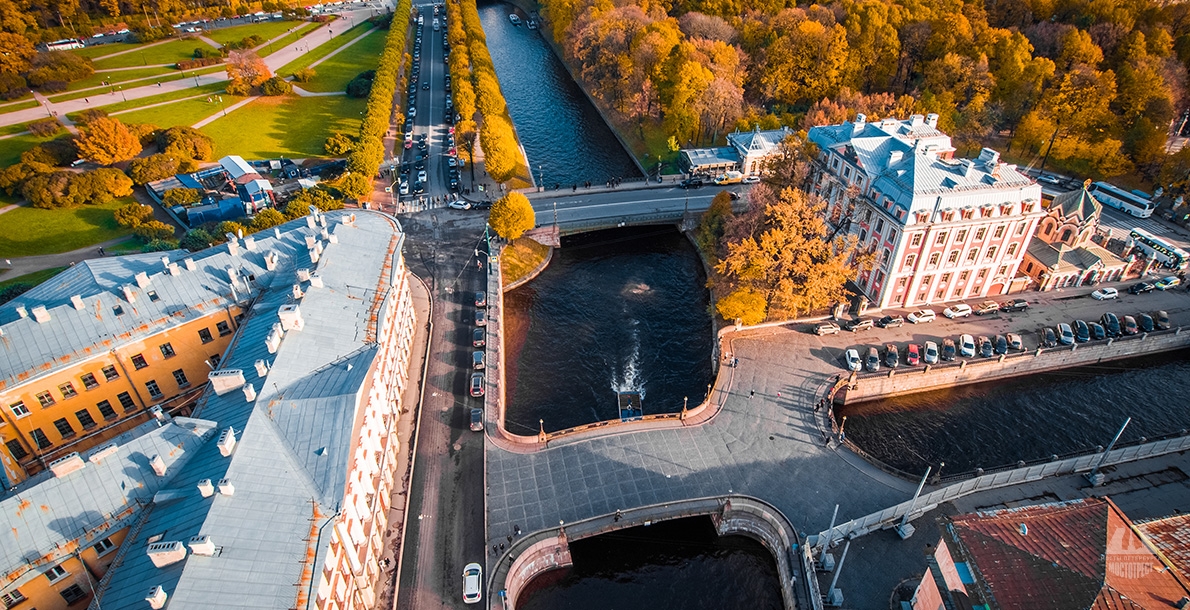 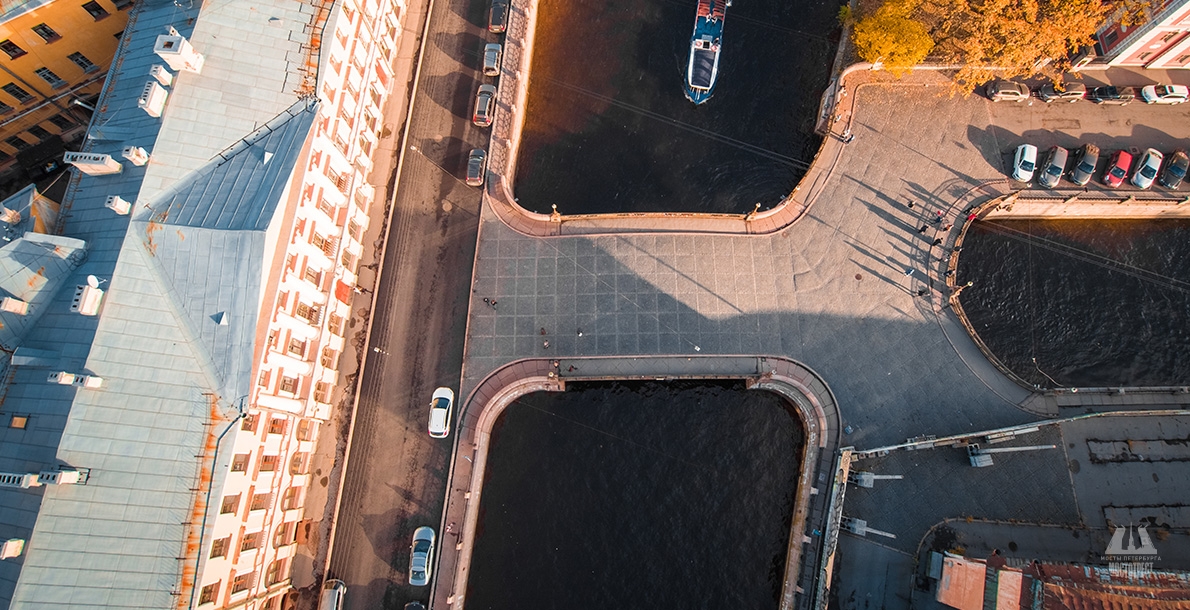 Once the head of the canal faced towards the mouth of the Moyka River and there was a wooden bridge. On the continuation of the street running along the western boundary of the Field of Mars there was another wooden bridge. Both bridges were lifting ones. Teatralny Bridge derived its name from a wooden theatre which was located on the Field of Mars at the XVIII century and Malo-Konyushenny – from the Stables buildings located nearby.

In 1829-1830, under the project of engineers E.A. Adam and W. Von Treter, wooden bridges were rebuilt into single-span cast iron arched ones. The composition of the bridges spanning the Moyka River and the Griboyedov Canal by three spans with a centre support is unique; hence the former names of the bridges –Trehkolenny Bridge, Treharkovy Bridge, Triple Bridge.

It is noteworthy that there was a dispute about the design of structures between engineers. Adam offered to decorate Teatralny Bridge and Malo-Konyushenny Bridge in different ways, but Tretter insisted on a single design of two crossings. It is believed that the project of crossings design was prepared by Rossi himself in 1824.

Arched spans of the bridge consist of cast-iron boxes fastened together with bolts – prefabricated structures was typical for the time. The span facades were decorated with relief cast iron ornaments. Over the span structure simple brick back filling and the roadway pavement with cobblestone covering - Kleinfleister. The bridge has massive rock abutments on pile foundation, faced with granite. All three bridges had the same pattern of cast iron gratings consisting of darts against the backdrop of which jellyfish heads are interchanged.

The lamps installed there for the first time was so high that lamplighters fell from them several times. In this connection Governor General of St. Petersburg P.K. Essen requested the General Directorate of Railways to lower them. This request was approved and the lamps were lowered.

After 1917 many of the decorative elements of bridges were lost or partially damaged.

In 1936, during the major repair of crossings, the roadway was paved with diabase, sidewalks were asphalted and separated from each other by a high curb.

In 1952-1953, under the project of A.L. Rotach, stand lams, lanterns and railing gratings were restored.

After restoration works in 2001 vehicular traffic on Teatralny Bridge and Malo-Konyushenny Bridge were stopped. Their decking was paved with stone again. At this time the works were supervised by engineer and bridge builder B. Brudno.

Malo-Konyushenny Bridge and Teatralny Bridge are under state protection as a monuments of architecture of the first half of the XIX century. They are a popular place for newlyweds photographing. There is a tradition in St. Petersburg that the groom is obliged to take the bride in his arms and carry her over the Malo-Konyushenny Bridge. 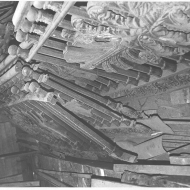 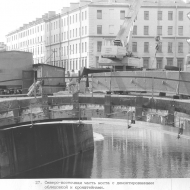 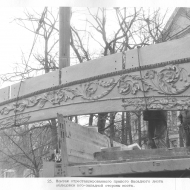 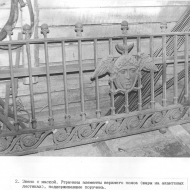