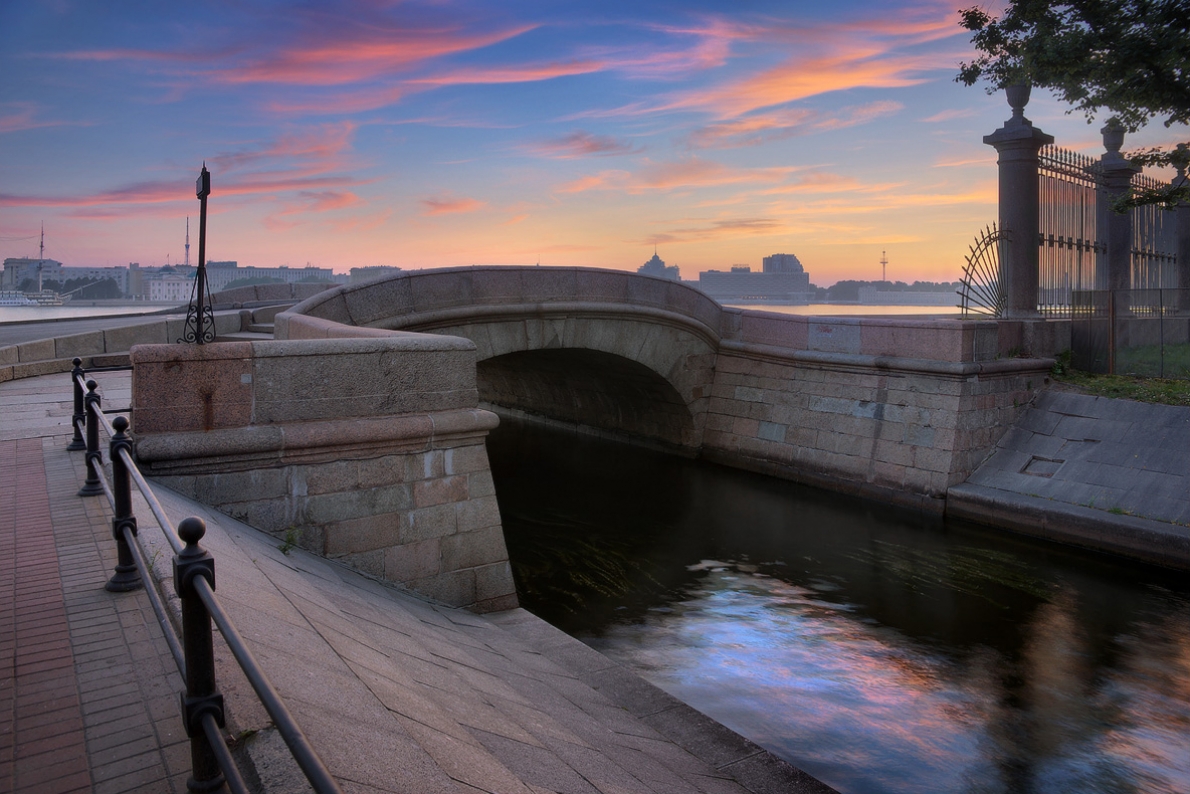 Verkhny Lebyazhy Bridge (former Lebyazhy: 1821-1829, Lebyazhy Kamenny Bridge: 1836-1846, Lebyazhy Verkhny Bridge: 1865-1917) is the bridge over the Lebyazhy Canal, located in the place where it flows out of the Neva River. Connects the 1st Admiralty Island and the Summer Garden in the Central District of St.-Petersburg. The external appearance of the bridge remained till now in the original form.

Upon termination of works after the construction of a retaining wall of the Neva Embankment in front of the Summer garden, the wooden bridge in 1767-1768 was built under the project of architect I.L. Rossi, a single-span stone hingeless arch with a parabolic outline of the arch with facades faced with granite. The bridge has quarry stone abutments on pile foundation, faced with granite.

The railing on the bridge is installed in the form of solid granite parapet adjacent to the embankment parapets. Granite slabs were laid on the sidewalks, gas lights were installed on the abutments, which still existed in 1880. At some moment they disappeared from the bridge, the disappearance time is not determined.

Verkhny Lebyazhy Bridge refers to a series of "humpbacked" bridges located on the left bank of the Neva River (including Prachechny Bridge and Hermitage Bridge). Together with the Summer Garden fencing they create a magnificent ensemble from the Neva River.

Since 1840 there deformations on the bridge in the form of settling of supports and damage of the stone arching, in this connection the project of repair with replacement of a parabolic outline of the arch by new brick with circular outline and the heels of the arch lifted above the level of the river on 1 meter was made, but this project was not carried out.

Only after 160 years of operation the bridge repair was carried out. Works were performed in 1927-1928 under the direction of engineer L.A. Krushilnitsky. The bridge is kept its original appearance during the repair.

In 1934 arch insulation was repaired.

Verkhny Lebyazhy Bridge is one of the few bridges remained till our time almost without change of constructive and architectural forms.

In some sources on city history the bridge construction is connected with a name of architect Yu.M. Felten. It has no documentary proof, and in the official guide “Monuments of history and culture of Leningrad under the state protection” it is presumably underlined that I. L. Rossi was the author of the project of the bridge.