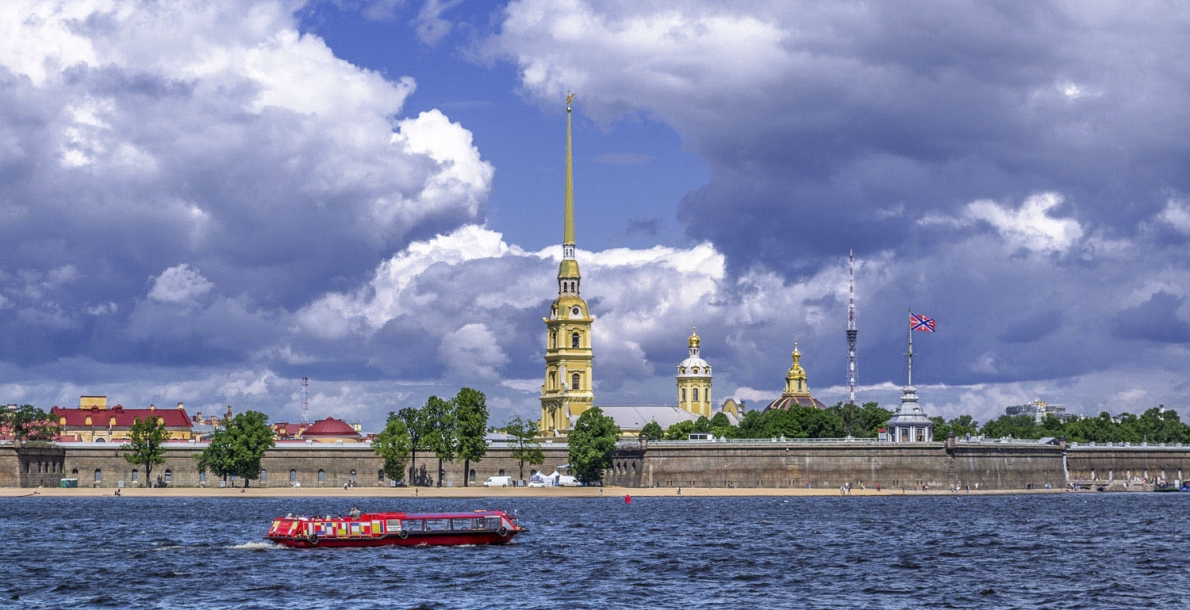 Peter-and-Paul Fortress is located on Zayachy Island washed from the south by the Neva River, and from the north – by Kronverksky Strait.

The Peter-and-Paul Fortress laid date is May 16, 1703 (as per the New Style Calendar) is considered as the day of Saint Petersburg foundation.

Originally, Zayachy Island had the following dimensions: 750 m in length and 300 m in width. The first fortress was wooden and earth. Backfilling was made on the lower and in places on the swamped island, bastions were erected on grillage. Six bastions interconnected by walls – curtains. A canal of 5 m in width was cut along the entire island to deliver construction materials.

In 1730s additional reinforcements – ravelins were erected: Alekseyevsky from the western side and Ioannovsky – from the eastern one. They were separated from the main fortress by the transversal pits.

By 1740 the fortress was already stone. Its walls raised 12 m over the water. The stone fortress exceeded the earth one by their sizes.

From the south side of the fortress between Naryshkin and Gosudarev Bastions there are Nevsky Gates leading to Komendantskaya Quay with the possibility to access to the fortress out from the water directly. It was built in 1775. The quay length was 37 meters, width – 6.4 meters. It represented an arch three-span stone bridge with a wide platform at the end and granite stairs adjoining from three sides. The quay was guarded with parapets and at the water on the lower platform there were six massive decorative bollards.

In 1779-1785 the fortress walls were faced with large blocks of gray granite from the side of the Neva River. After the island was flooded during the flood of 1824, the transversal pits isolating the ravelins from the fortress were filled and in 1840 the longitudinal canal was also filled.

On June 1, 1924 the fortress was opened as a museum. During the Great Patriotic War in 1941-1943 air defence batteries and searchlight forces of air defence were located there. During the siege the fortress and Komendantskaya Quay were destroyed. The quay was restored in 1953.

A beach remained one of the popular places of the fortress bank. In historical materials it was firstly mentioned in the XVIII century. There were several reasons why it appeared: Banking by the river, store of soil due to construction of structures inside the fortress and artificial filling to raise the island territory. On the western end the filling layer reached thickness over 2.5 m.

Bank line reinforcement began in the 1920s. In 1950s a wooden wall was arranged. In 1965 trust Sevzapmorgidrostroy constructed the lower unsecured bulwark consisting of reinforced concrete sheet pile with a 689 m long cap beam at the section from Ioannovsky Bridge to the end of Naryshkin Bastion (i.e. the beach). A land strip with width of 5 to 9 m between the pile and walls of the fortress was paved with cobblestone on the concrete base. The pavement consisted of two parts: flat slope and horizontal area.

Along the beach to the end of Trubetskoy Bastion a wooden wall was constructed of wooden fillet and a row of wooden piles over the cap pieces there was a drain of boards. In 1978 these structure was extended to the western island end.

Soon the wooden wall on the western island end got out of order in contrast to the wall of the same structure in the way of nevsky beach where the river stream ran along the wooden wall. In 1987 on the western end of Zayachy Island the bank reinforcement looked like a slope extending to the water paved with cobblestone. A wall portion below Kronverksky Bridge with length of 27 m remained combined: reinforced concrete banket with wooden piles.

Peter-and-Paul Fortress is under supervision of Saint Petersburg Museum of History.