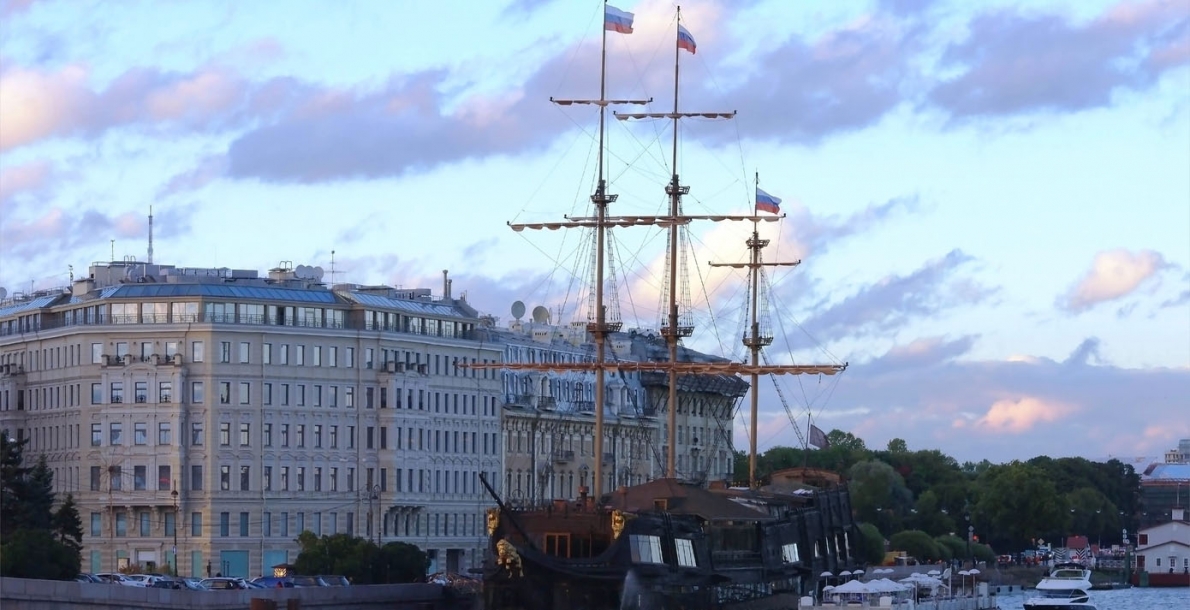 Engineers: A. A. Kulikov

The embankment name comes from the Russian old word "myt", which means “toll”, directly relating to the commercial port. Initially, the commercial port in St. Petersburg was located on the right bank of Kronverksky Gullet protected by Peter-and-Paul-Fortress. In the XVII-XVIII centuries "myt" meant storage location of the goods delivered by water, where road tax was charged. The embankment derived its name in 1882 from Mytny courtyard which was built on the adjacent territory.

In 1893-1894 25 long-span wooden Birzhevoy Bridge connecting Vasilyevsky Island with Petrogradsky Island was build through the axis of narrow Zoologichesky Lane on Petrograd Side.

In connection with this, the adjacent embankment structure was changed in the area from Zoological Park to Alexandrovsky Prospect (current Dobrolyubova Prospect).  Here there was a concrete banked earth based on the sheet piles with a curved outline of the slope faced with ragged stone. Along a shoulder as the guard there were bollards with chains, five stairs were located on the slope. At the beginning of the embankment in front of Kronverksky Prospect there was Winter slope with a gentle ramp.

Wooden bridge structures often had to be repaired, and the project of the steel bridge was created in 1940, which was not realized at that time. The idea to rebuild the wooden bridge was returned to in 1956. To create a symmetrical composition of two bridges, Palace Bridge and Birzhevoy Bridge, great backfilling at Mytninskaya Embankment was required, which allowed to reduce the length of Birzhevoy Bridge from 326 m to 239 m.  The bridge took a new position – 70 m downstream the Malaya Neva River, and a large area has been arranged at the bridge with access to Dobrolyubova Prospect (current Academician Likhachev Square).

New Birzhevoy Bridge (it was called as Stroiteley Bridge until 1989) was built in 1960. The complex included the adjacent areas of high granite embankment wall: upstream section of 167.2 m and downstream (with the pavilion of guard) of 59 m. In the same year the embankment was completed upstream – the section of 217.5 m long with a large parade descent of 23.5 m on the area of the former Winter descent. Above the descent, the embankment separated by a transverse granite wall has a kind of low banked wall with a gentle green slope and brush planting on the edge. The embankment project was created by architect L. A. Noskov and engineer A. A. Kulikov. A park is planted along the embankment.

For tourists, the embankment is a part of the way from Spit of Vasilyevsky Island in the direction of Peter-and-Paul Fortress, so it is the place, where one can always meet the sellers of souvenirs with St. Petersburg symbols.