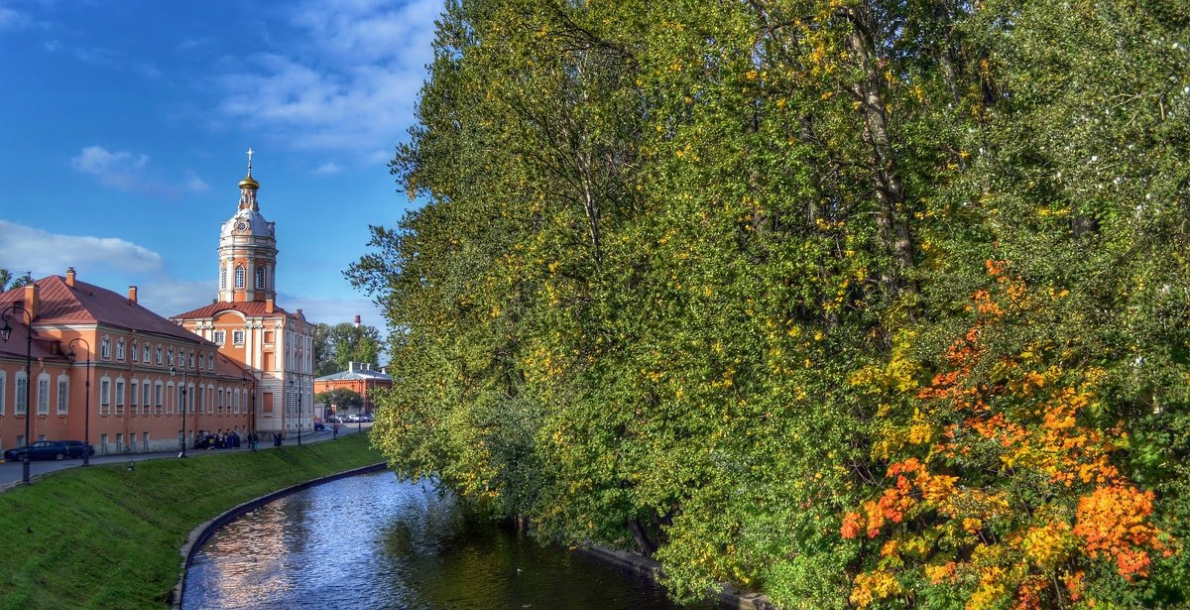 The Monastyrka River Embankment expands on the most part of Monastersky Island including Metropolichy Garden and Alexander Nevsky Monastery in Central District of St. Petersburg.

The Monastyrka River is the former left tributary of the Neva River. The reference of this river is available as early as in the annals of 1500; it was called the Setuy River before.

A new chapter in the history of the river began with a visit of Peter the Great of the place where the river flows into the Neva River in 1710. The Tsar decided to found a monastery in this place dedicated to Alexander Nevsky.

The first bridge was built here in 1712.

"For the draining of swamp waters" from the river to the south a canal was cut. In 1725 it was expanded, and a harbour was arranged, so that barges with cargoes for the construction of the monastery could enter from the mouth of the Neva River into the Monastyrka River. Over time the channel was filled up.

Hydrography of the place was changed in connection with the completion of the Obvodny Canal construction. In 1829 a part of the river port formed on the embankment of the Neva River at the canal source. A flour mill was built nearby, and later - an elevator; in the area between the monastery and the Neva River granaries were built.

High river banks were strengthened by driving of wooden piles with retaining walls. The steep slopes of the banks were often hollowed-out, posing risks to the existence of historic cemeteries-necropoleis: Lazarevsky and Tykhonovsky cemeteries.

In connection with the construction of Alexander Nevsky Bridge the whole area from the entrance to the bridge to the Obvodny Canal was beautified. In 1963 reinforcement of the banks by a low banked wall began in the area between Obukhovskoy Oborony and Monastyrsky bridges; and in 1965 - in the territory of a Timber Factory n.a. Halturin, mainly on the left bank of the river, and near Kazachy Bridge at the confluence of the Monastyrka River into the Obvodny Canal. In 1973 the recent low sections of the embankment were built between the 1st Lavrsky Bridge and Monastyrsky Bridge in the territory of the Timber Factory on the right bank.

Reinforcement of the Monastyrka River banks was carried out all along the river by low banked wall of reinforced concrete blocks faced with granite, on a high pile grillage with reinforced concrete sheet piling and a row of piles. A high vertical retaining 13 meter long wall supporting transport passage along the river was built only near the 1st Lavrsky Bridge on the left bank down the stream.