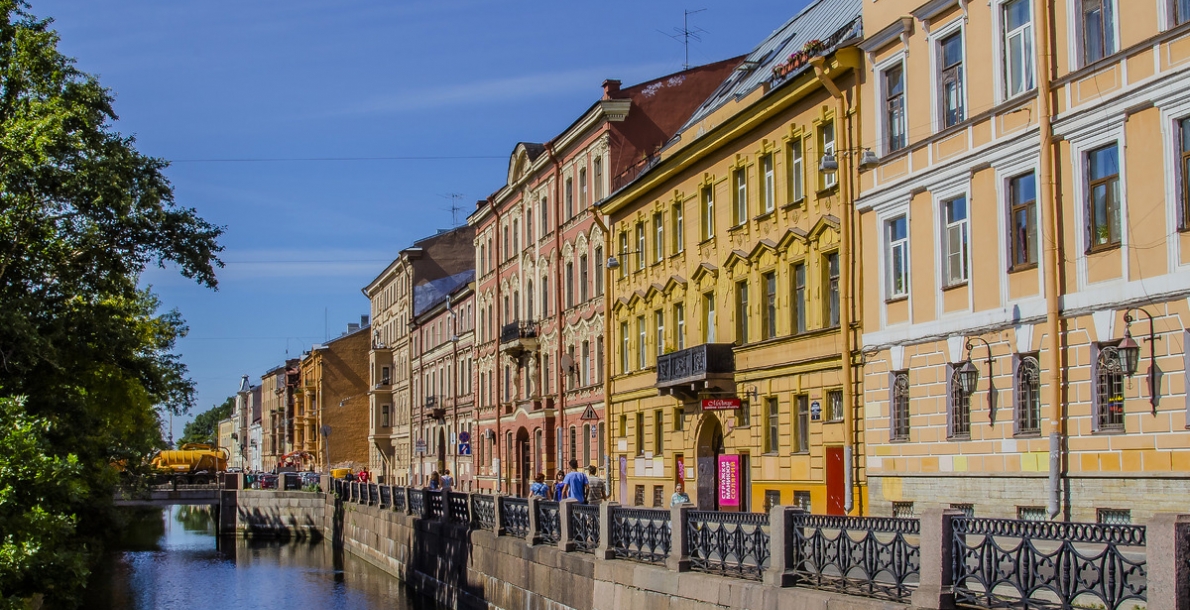 The Admiralty Canal Embankment is located in Admiralteysky District of St. Petersburg. It expands between the Kryukov Canal and the Novo-Admiralty Canal along one of the boundaries of the New Holland Island.

In 1713 in Saint Petersburg for small galley ships construction additional facility of the Admiralty was created which became known as Galernaya shipyard later and was located on Novo-Admiralty Island.

In 1717 the canal was cut from the walls of the Admiralty to Galernaya shipyard. It served as a transport route between Admiralty Shipyards and ship timber warehouses on New Holland Island. Its original name was the Pryadilny Canal as at the beginning of the XVIII century there were textile stores. In 1738 it was renamed the Admiralty Canal.

In the first half of the XIX century the canal for the most part - from the Admiralty to the Kryukov Canal - was filled up and became much shorter. Konnogvardeysky Boulevard was arranged at the place.

Along the rest of the canal a wooden wall was built: cross beams were laid on hammered wooden piles, and wooden railings with two crossbars were installed on the cross beams. The side board of plates was installed between the piles. There was a board pavement on the sidewalk.

In 1922 the Admiralty Canal was renamed the Krushtein Canal; and the embankment, respectively, was named Krushtein Canal Embankment in honour of the participant of the Civil War, commissioner of Chief Hydrographic Department K.Ya.Krushtein (1887-1921) who was killed by socialist-revolutionaries.

In 1959 the banks of the canal were strengthened with granite: along New Holland Island, on the left bank, there was a low 249 meter long wall, and along the right bank - a high 316.5 meter long wall. The author of the project is engineer E.E. Rosenfeld.

In 1967, at the confluence of the canal to the Moyka River, on the approaches to Khrapovitsky bridge, on the right bank, a high concrete 12.8 meter long wall with granite facing was built under the project carried out by the Lengiproinzhproject Institute.

A memorial plaque with information about the part of the Admiralty Canal filled up in the XIX century can be seen in the pedestrian underpass under Ploshchad Truda Square.