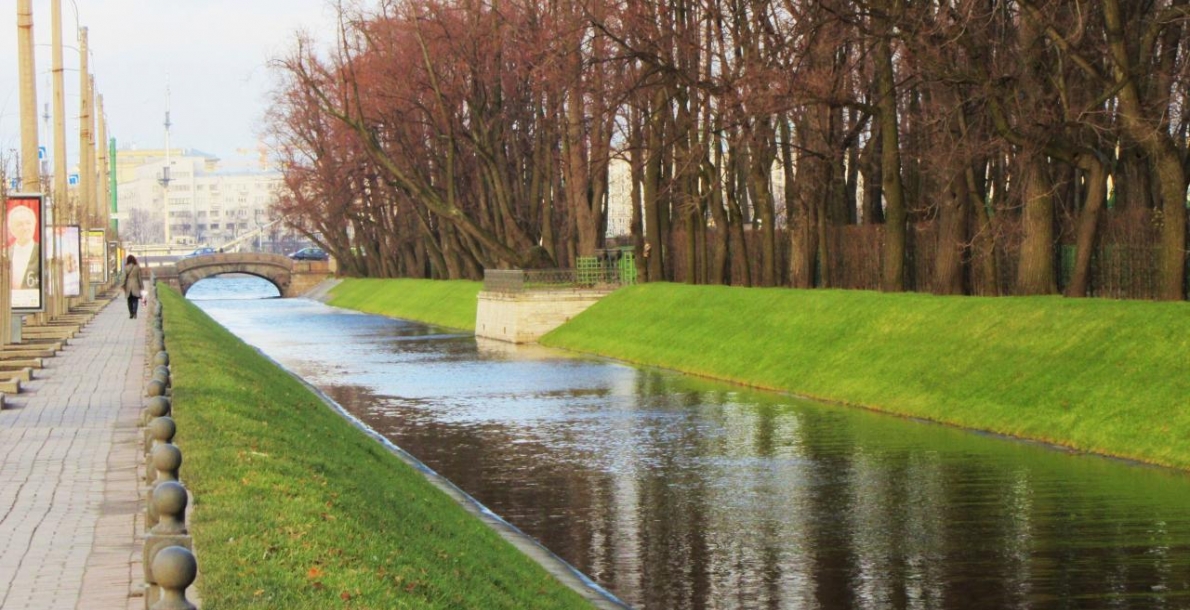 The canal was cut in 1711-1716 for the drainage of the area of Tsaritsyn Meadow (Field of Mars) and the Summer Garden. At that time the banks of a new canal were reinforced with wooden piles. Supposedly, at the same time along the Tsaritsyn Meadows wooden railings were installed on the bank, as there were reference on their repair in old documents relating to 1761. The canal is bounded by two single-span bridges: Verkhny Lebyazhy Bridge passing by Palace Embankment and Nizhny Lebyazhy Bridge - on the Moyka River Embankment.

The name of the canal is connected with the fact that in the XVIII century swans moved there from the neighbouring ponds.

In 1797 on the left bank, from the side of the Summer Garden, terrace for boats mooring was built. The terrace was built of Syassky limestone slabs fenced by balustrade of Pudozh stone under the project of architect G. Pilnyakov. In 1824 the terrace was destroyed by a flood, and then it was restored under the project of architect Pistsov: stone balusters were replaced by iron openwork lattice, according to the design of an architect L.I. Charlemagne (according to other sources – K.I. Rossi).

In 1934 throughout the canal along the bank line sheet piling was driven to protect the slopes from slumping. The canal slopes near to Verkhny Lebyazhy Bridge were covered with coping stone.

In 1941 a project was developed to strengthen the banks by concrete bench with diabase coating of the slopes. The project could not be implemented due to the outbreak of the Great Patriotic War.

In 1957 the slopes throughout the canal were reinforced, the terrace in the Summer Garden was renovated and cast-iron railings of the terrace dismantled in 1940 were restored. Authors of the project - architect L.A. Noskov and engineer A.D. Gutzeit.

In 1976 in the course of underwater engineering works two new water drain tunnels were laid next to the existing one.

In 1997 the passage along the Lebyazhy Canal Embankment was repaired on the right bank side, including the strengthening of slopes, tree transplantation, rearrangement of borders, sidewalks paving, installation of lawn fences.

The embankment is guarded by the Committee on State Control Use and Protection of Historical and Cultural Landmarks.