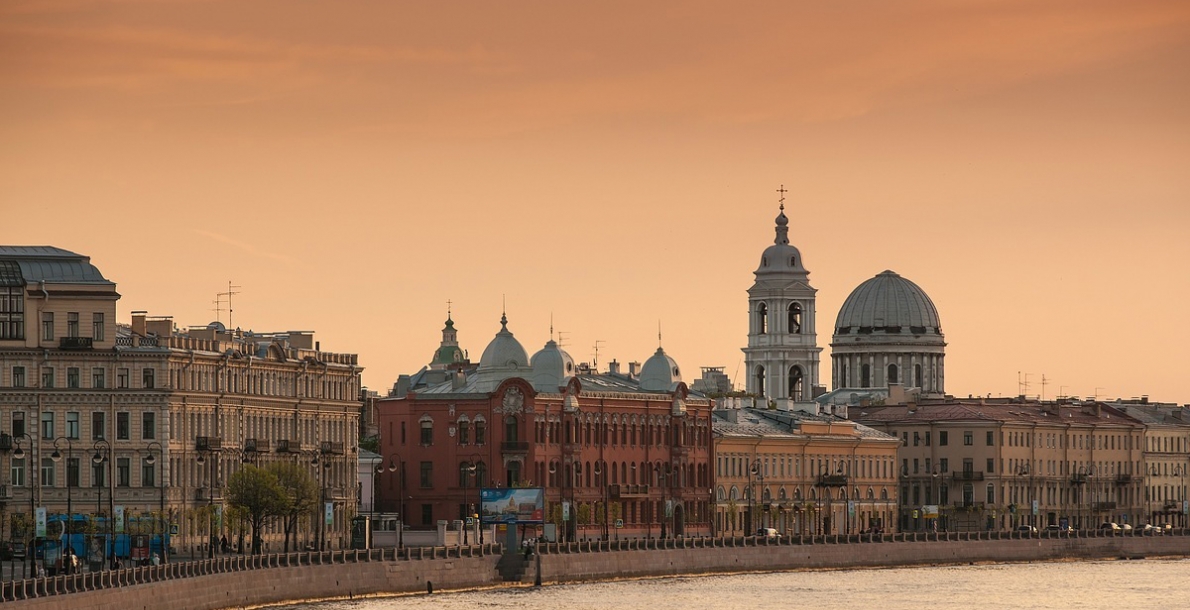 Makarova Embankment is on the left bank of the Malaya Neva River from Birzhevoy Bridge down to the mouth of the Smolenka River and is named after the outstanding Russian naval commander and scientific vice-admiral Stepan Osipovich Makarov.

The embankment received its modern name in 1952. Before that it was part of Tuchkov Embankment (since 1887) which was considerably longer, about 3570 meters, began from the middle of Spit of Vasilyevsky Island descent and proceeded on Goloday and Volny Islands (today Dekabristov Island).

The reinforcement of the Makarova Embankment bank line with durable materials began in connection with implementation of the project of Spit of Vasilyevsky Island ensemble in the beginning of the XIX century.

The high granite wall on wooden grillage stretching from the descent opposite to Old Saint Petersburg Stock Exchange till Birzhevaya Line entered into a complex of civil works, under the project of Tomas de Thomon and engineer F.I. Gerard. The Spit of Vasilyevsky Island ensemble ended in 1832 with construction of two warehouses on the sides of Old Saint Petersburg Stock Exchange and Customs building (now — the Pushkin House), under the project of architect I.F. Lukini. The Customs building is located directly on Makarov Embankment.

Opposite to Tiflisskaya Street in the same years, under the project of I.F. Lukini, the berth with ladder descents and stone sculptures of lying lions was established. The granite wall on wooden grillage was prolonged to Volkhovsky Lane. Further on the bank prior to floating Tuchkov Bridge there was a low wall of 0.3-0.5 meters height from a normal level faced with one row of granite plates with a soil slope.

Opposite Birzhevaya Line there was a cargo descent, and at Volkhovsky Lane, Sredny Prospect and at Tuchkov Bridge — unloading walls. Till 1930 there was an ancient rotary metal crane established on a special granite pedestal below Birzhevoy Bridge, reminding of port existence.

Till 1952 there were no fences on the embankment as its wall was built as a cargo one. In 1956-1958 the construction of a high wall began in two places at once: from Tiflisskaya Street to Tuchkov Lane and from Maly Prospect to the 5th Line of Vasilyevsky Island.

Near to the head of the Smolenka River one of the embankment sectors of 110 meters long was built as a berthing wall. The basis sole was expanded for this purpose, the length of the wooden piles was increased up to 17 meters.

In 1960, in connection with the construction of the new Stroiteley Bridge (present Birzhevoy Bridge), major repair of the embankment wall from Stroiteley Bridge to the descent with lions was made. Actually, a new monolithic wall was built of wooden piles up to 13 meters long, on wooden pile foundation. The embankment is faced with granite: two bottom rows of massive facing, above — hinged slabby facing. The parapet becomes the fencing, underlining the magnificence of the embankment.

In 1966, during construction of the reinforced concrete Tuchkov Bridge, the upper and lower walls of the embankment adjoined to it were finished. New walls adjoined to the existing ones by means of two similar descents. It was a finishing link of the bank reinforcement from Birzhevoy Bridge to the mouth of the Smolenka River. Thus, the shape of one of the magnificent embankments in city centre was generated; together with the descent with lions it is an object of cultural heritage and is guarded by the Committee on State Control Use and Protection of Historical and Cultural Landmarks.

The last transformations of the embankment were made in 2015 when the second lobby of Sportivnaya metro station was opened on the side of Vasilyevsky Island. The highway which will be connected to the Western High-Speed Diameter on Dekabristov Island became one of new sectors of Makarova Embankment.