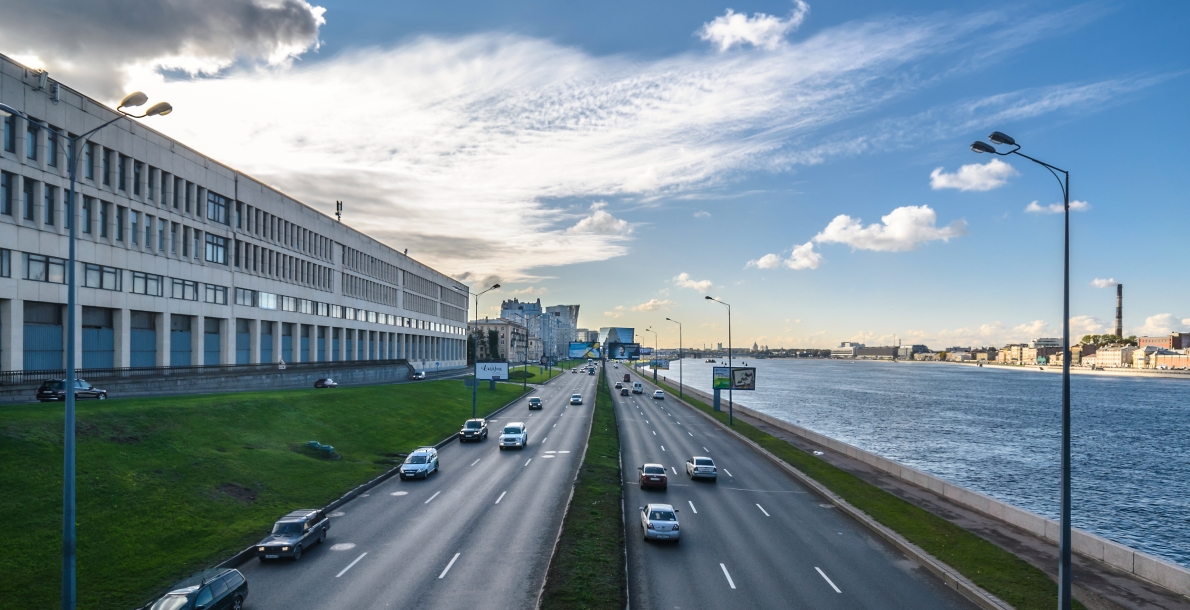 Malookhtinsky Prospect Embankment is located in Krasnogvardeysky District on the right bank of the Neva River and passes from the Finland Railway Bridge downstream to the mouth of the Okhta River.

The area of Okhta is divided into two parts: Bolshaya Okhta on the right bank and Malaya Okhta on left bank of the Okhta River. First references of this river are met in the Novgorod annals of 1300. Historically, it was a place of territorial disputes of Russians and Swedes. In 1703 the Swedish fortress Nienschanz which was located on Okhta has fallen, and Peter the Great renamed it as Shlotburg. Then it was razed, and on its place the Okhta Admiralty (later Okhta Shipyards) was founded. Today this sector is fenced for realisation of the investment project.

The reinforcement of the bank line of Maloohtinskaya Embankment in modern materials began in connection with construction of Bolsheokhtinsky Bridge (1908-1911). At bridge foundations, on both banks, small embankment walls with descents to the water were constructed.

During construction of the Finland Railway Bridge in 1912, on the right bank of the Neva River, big excavation works were carried out. The so-called Finnish Dam was raised, and the bank line of the river was reinforced.

In 1936 Lenmosttrest developed the project of the bank reinforcement of the sector from the Finland Bridge and lower. The construction began, but it was suspended even before the war, and was frozen due to the war. In total 1212 meters of the wall on the sector from Zanevsky Prospect and lower downstream were constructed. The embankment was a low concrete banquet wall on wooden piles with a soil slope. Part of this wall was later used in construction of the big descent under Alexander Nevsky Bridge (it was constructed in 1960-1965) and an adjoining upstream wall.

In 1990-1992 the sector of the 681 meter long embankment from Pomyalovskogo Street to Perevozny Lane was constructed. In 1998 the following sector — from Perevozny Lane to Alexander Nevsky Bridge (415 meters long), adjoined to the existing wall, was created.

The embankment design represents a high wall on a high pile grillage with the hinged blocks faced with granite.

Constructed sectors of the embankment are front embankments of the city centre with granite parapet and green lawn along sidewalk.

Today Malookhtinskaya Embankment became one of the new centres of business activity of the city.