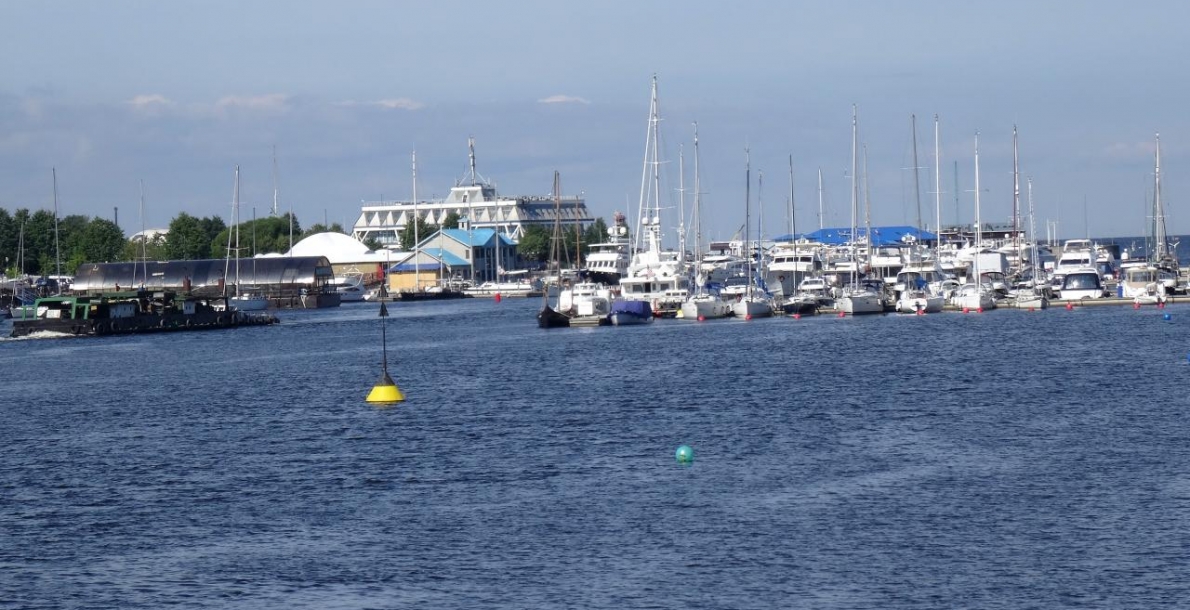 Engineers: Design Institute No. 1 under Gosstroy of the USSR

The embankment closes protection of the right bank of the Malaya Neva River and comes out the Gulf of Finland coast, directly adjacent to the protective breakwater of the West harbour of Petrovsky Island.

In the XVIII century, the entire Petrovsky Island was a suburban area with summer houses. In the area of the current Petrovskaya Square leading to Bolshoy Krestovsky Bridge there was a small suburban palace of Peter the Great. In 1768 it was replaced by a wooden palace erected under the project of A. Rinaldi. It was empty for a long time, and it was completely burned in 1912. The surrounding park occupied a large part of the island, but since the end of the XVIII century large areas of the island allocated for warehouse and industrial premises.  Here there were small shipbuilding facilities, docks, cable factory, kerosene warehouses facing the Malaya Nevka River. By the way, they gave the name of the Kerosinovka River, which is a crossing canal of the island.

For a long time shores of Petrovskaya bay-bar in the western part of the island was not arranged, in the winter the snow was dumped there. Only in 1966 the bank of the Malaya Nevka River below the mouth of the Kerosinovka River and the Grebnoy basin adjacent to the territory of the Almaz shipyard from the side of the Malaya Neva River have been simultaneously strengthened.

The wall of the embankment of Grebnoy basin (port) is low without granite facing with a slope reinforced with concrete slabs. On the embankment there are two moorage walls with mooring devices and 4 stair descents.

The bank of the Malaya Neva River is reinforced by the quite different structures. This is the first slope marine embankment in the city - step prefabricated reinforced concrete wall faced with granite on the high pile grillage. Step structure of the wall greatly reduces the value of waves set-up, increases the effect of waves absorbing and waves reflection approximately twice, reduces surges 1.5 times.

At the same time, during the floods of 1969-1975, especially in 1975, which is in the list of catastrophic ones, a passage along the wall has been destroyed due to erosion. In 1981 the overhaul was performed. In the place where the wall of Grebnoy basin came out onto the bank of the Malay Neva River, the slope reinforcement was made - small reinforced concrete slabs were replaced by larger ones, the underwater slope was planned and reinforced by rubblework. Along the embankment wall of the Malay Neva River a new storm sewer and rainwater drainage were arranged with connection to the storm sewer. In the places of passage dips, the asphalt was opened and loaded filter was filled behind the wall of a wooden dowel.

Near the embankment there is River Yacht Club.