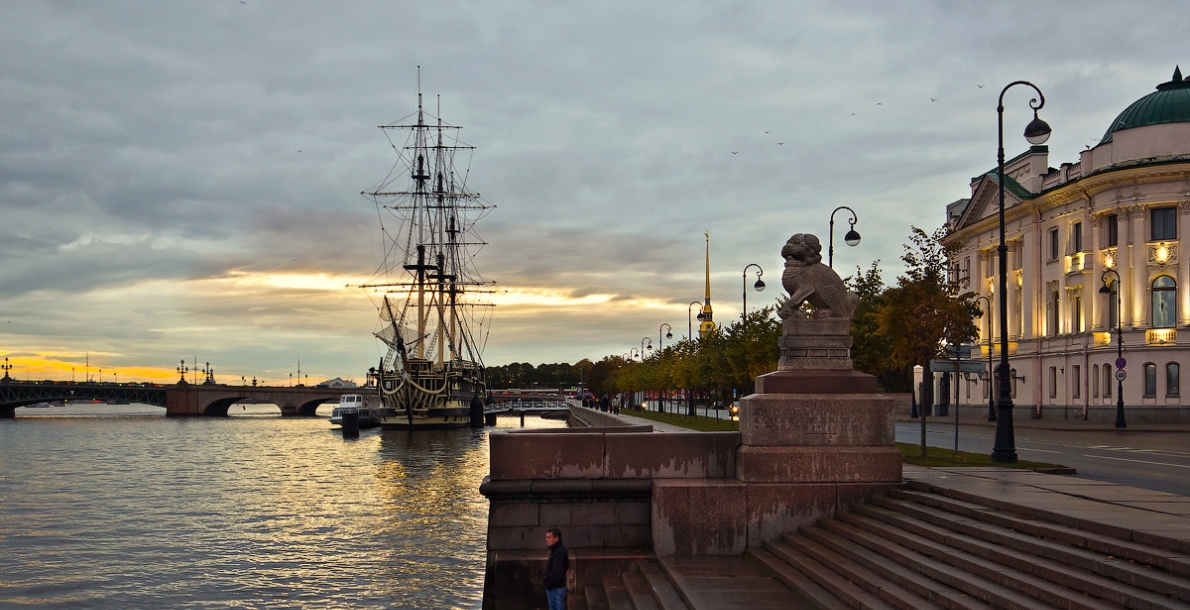 Petrovskaya Embankment is located in Petrogradsky District on the right bank of the Neva River between the heads of the Bolshaya Nevka River and Kronversky Gullet.

Originally, upon completion of the construction in 1903, the embankment has been named after Emperor Peter the Great and in 1950 it was renamed as Petrovskaya Embankment.

Petrogradskaya Side is the oldest part of Saint Petersburg. In 1703 the port was established under cover of erecting Peter-and-Paul Fortress at the place of modern Troitskaya Square (its one side faces the embankment). Wooden Cabin of Peter the Great, which survives to this days (Building No. 6 located on Petrovskaya Embankment). The cabin was made of deal hewn timber and painted as brick, it stood at the water edge. Later, when a new embankment was filled, the cabin was moved away from the bank. Nearby buildings of other famous persons of Peter’s time, for example, duke A.D. Menshikov, Petersburg voivode I. P. Stroyev, 2nd commandant of Peter-and-Paul Fortress R. V. Bryus and others. Since the end of the XVIII century, after buildings were left and disassembled and when the centre of the city was displaced to the Admiralty, there were warehouses of bristles and lint at this place.

The territory improvement began in connection with installation of floating Suvorovsky Bridge in 1803. 20 years later it was reconstructed, and the crossing was displaced downstream and connected with the bank by means of rock-fill earth dam faced with granite.

By the 200th anniversary of Saint Petersburg it was decided to construct the permanent bridge at the place of the floating one and arrange the adjacent embankment. The idea of the dam as a bridge abutment to the bank was saved replacing it with a three-span arch. In this case the bent section of the embankment jointed to the abutment of the erected Troitsky Bridge.

During construction of the embankment the bank line was aligned and it turned out to be protruded by about 30 m to the river. In this place sufficient filling of the ground was required.

The embankment was constructed as front one. On the embankment there are two semi-round descents resembling the semi-round ones of the oldest embankments of the city in broad outline; their original decision belongs to L. I. Rossi.

Opposite the Cabin of Peter the Great a descent with a broad stair was erected. In 1907 on the descent there were figures of mythological “Shi-Tsa” lion-frogs delivered from Girin (Manzhou) after Russian-Japanese War. Each sculpture weighs 2.5 tons and has 4.5 m in height. In China they are installed in pairs on both sides of the entrance a sanctuary or palace. They present a lion and a lioness protecting the entrance.

The embankment is guarded by a solid granite parapet, and its ordinary stones are alternated with so-called “stone-picture” where a frame is embossed using a depression on the surface facing the bank.