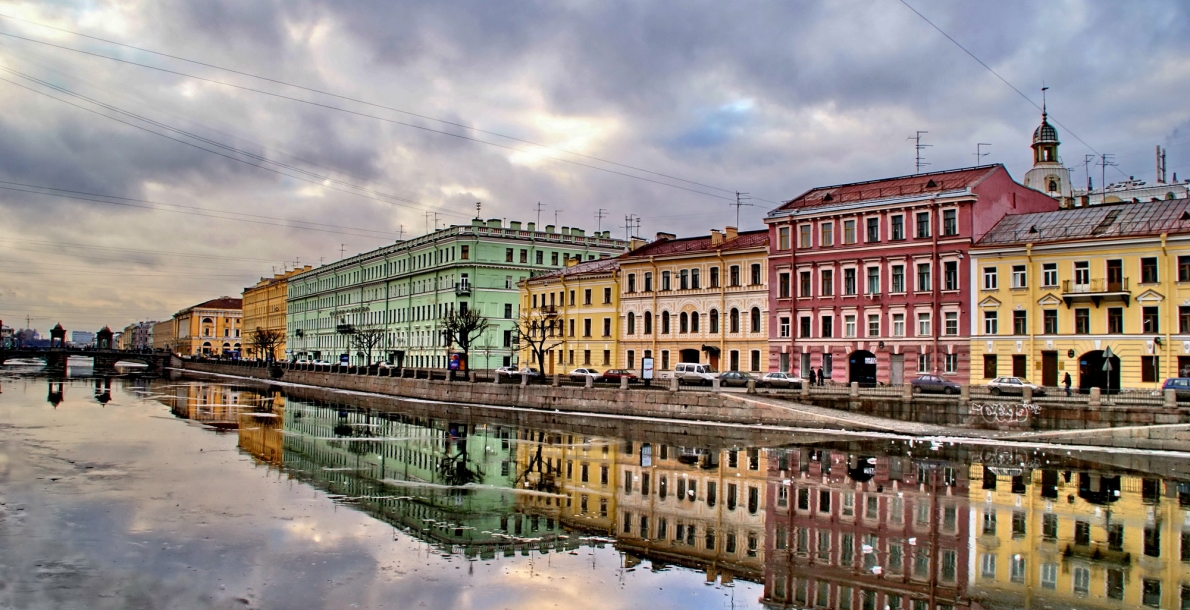 The Fontanka River Embankment is one of the longest embankments in Saint Petersburg. It starts and ends at the banks of the Neva River (from the place over opposite Peter-and-Paul Fortress until the place where the Neva River flows into the Gulf of Finland near Galerny Island) and runs over the whole historical centre of the city.  Until the middle of the XVIII century the Fontanka River was the southern border of Saint Petersburg.

The Census book of Votic Friday, 1500 the river flowing there was mentioned as the Golodusha River. Before 1712-1714 it was named Anonymous Greek, then it was the Fontannaya River and finally in 1737 it received its modern name. In the description of Saint Petersburg of 1751 one can read: “The Fontanka River has its name because the pipes were laid from the Basin <at the beginning of modern Ligovsky Prospect> to <Letny> Garden for fountains”.

In 1714 the first clearing and alignment of the Fontanka River banks had happened. At the locations of estates the bank was reinforced by wooden walls.

By 1727 the wooden reinforcements had already been in bad condition. In 1743-1752 the Fontanka River was substantially cleared, deepened, aligned and filled of the banks.

The first stone embankments of the Fontanka River appeared in the 1760s, during rebuilding of Prachechny Bridge in stone.

In 1780-1789 the banks of the Fontanka River were encased in granite. The stone walls were erected over the entire length of the river not reaching its mouth slightly. The reinforcement construction consisted of the high lime-stone mortar based stone wall faced with massive granite blocks. Generally, wooden pile grillages made of two rows of piles served as the base for the walls. The works were supervised by hydraulic engineer F. V. Baur, and after his death by engineers I. N. Borisov, I. K. Gerard, P. K. Sukhtelen and K. Moderakh.

On the Fontanka River there are 26 descents of two types: promenade with two longitudinal stairs and so called horse stairs with two ramps. The promenade descents were used for boats, cutters and wharfboats berthing; the horse ones – for transportation of drays with cargos delivered on small river ships and for river water intake to fill drums.

In the 1910s, due to the development of automobile and tram transport, part of pedestrian and horse descents were destroyed: they were filled or dismantled.

By 1925 many sections of the stone wall fell in emergency condition up to its breakdown. They were started to be overhauled. Vertical wooden piles were driven in the old piled base, then these piles were jointed with concrete foundation slab, and with rubble masonry above.

In 1962 for the repair of embankment walls a new workflow was accepted – to disassemble the wall partially in its thickness and perform the works under the protection of the not disassembled part. Originally this method of construction was used at the section between Panteleymonovsky and Belinsky Bridges on both sides. Wooden piles were driven up to 1984, then they were replaced with reinforced concrete ones.

The railings of the Fontanka River consists of granite pedestals and forged cast iron lattices with a simple pattern, which was presumably made under the pattern of architect G.Quarenghi and forged at the Ural factories of Demidov.

The embankment of the Fontanka River is included in the Unified State Register of Cultural Heritage Sites of Russia. It has a reputation of many sights. Among them there is a small but very popular monument Tchizhik-Pyzhik by sculptor Rezo Gabriadze; the monument was opened in 1994 near the Mikhailovsky Castle, which became one of the river symbols. Near Belinsky Bridge there is the Bolshoi St. Petersburg State Circus, opposite Leshtukov Bridge there is Tovstonogov Russian State Academic Bolshoi Drama Theatre.