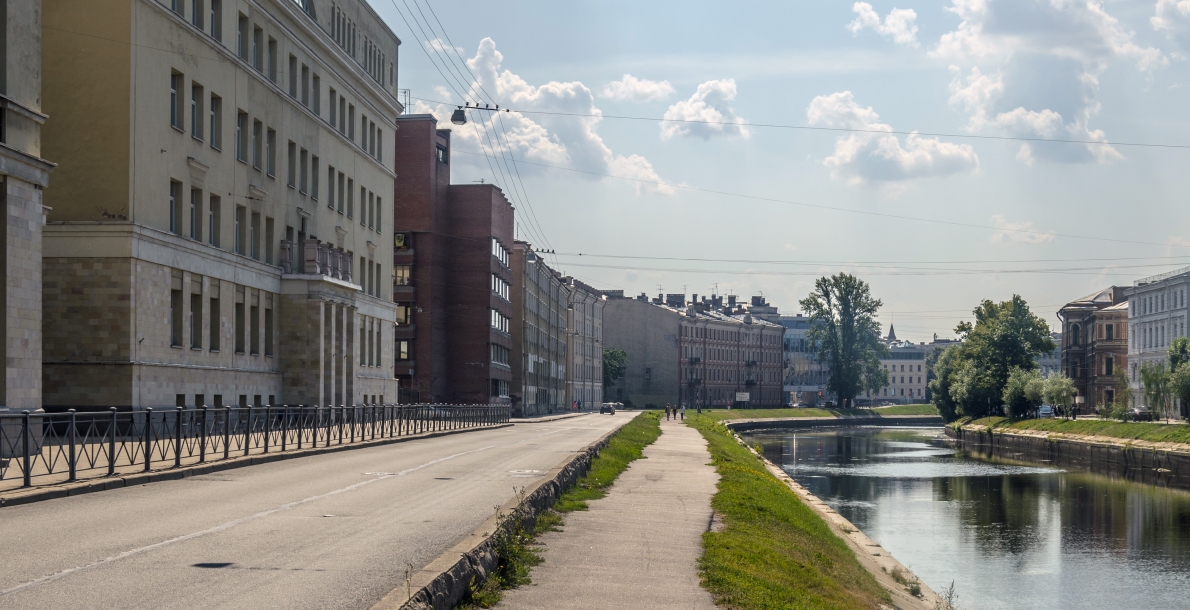 The Pryazhka Canal Embankment is located in Admiralteysky District of St. Petersburg. It passes from the Moyka River Embankment to Lotsmanskaya Street, on both banks of the river (the odd part on the section from Perevoznaya Street to Berdov Bridge is intended for pedestrians). The street ends near Berdov Bridge.

Matisov Bridge - the first bridge over the Pryazhka River – was built in 1737. In 1839 the bridge was rebuilt, and the stone abutments were constructed. Banny Bridge and Berdov Bridge were built around the same time in the 1830s. In 1962-1964 Banny Bridge was rebuilt. In conjunction with the bridge the low embankments walls with green slope were constructed from the upstream and downstream sides.

In 1982-1984 on both sides of the river between Matysov Bridge and Berdov Bridge a low banquet wall on pile foundation with granite cordon and stair descents on the green slope was built.

In the area between Matysov Bridge and Banny Bridge along the slopes walking paths were paved.

The existing embankment walls adjacent to Banny Bridge were rebuilt. The capstone of the embankment was raised to a height of 0.34 to 0.42 meters to interface with the newly built wall.

The Pryazhka River is one of the arms of the Neva River delta from the downstream. It flows out of the Moyka River and runs into the Neva River upstream the confluence of the former arm of the Fontanka River.

At the time of establishment of St. Petersburg the river was named the Chukhonskaya River. In 1738 fire hazardous textile stores and tarring loft were transferred from the Admiralty district to the suburb, after the Kryukov Canal. They were placed on the bank of the Chukhonskaya River, which soon became known as the Pryazhka River, by the nature of production arisen here.