Embankment of the Spit of Vasilievsky Island 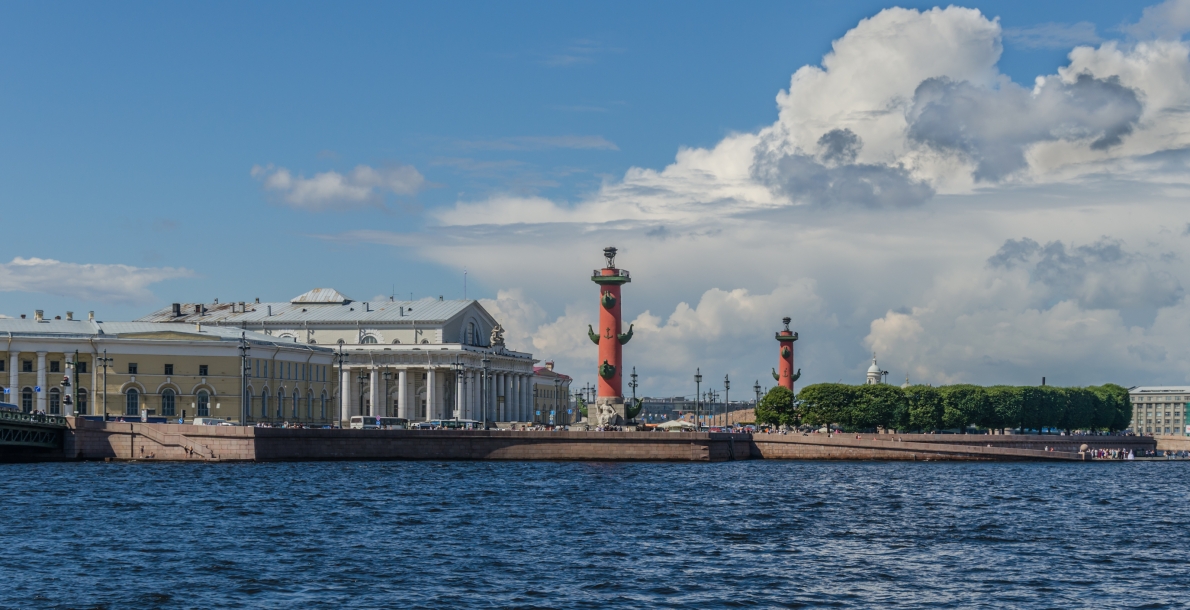 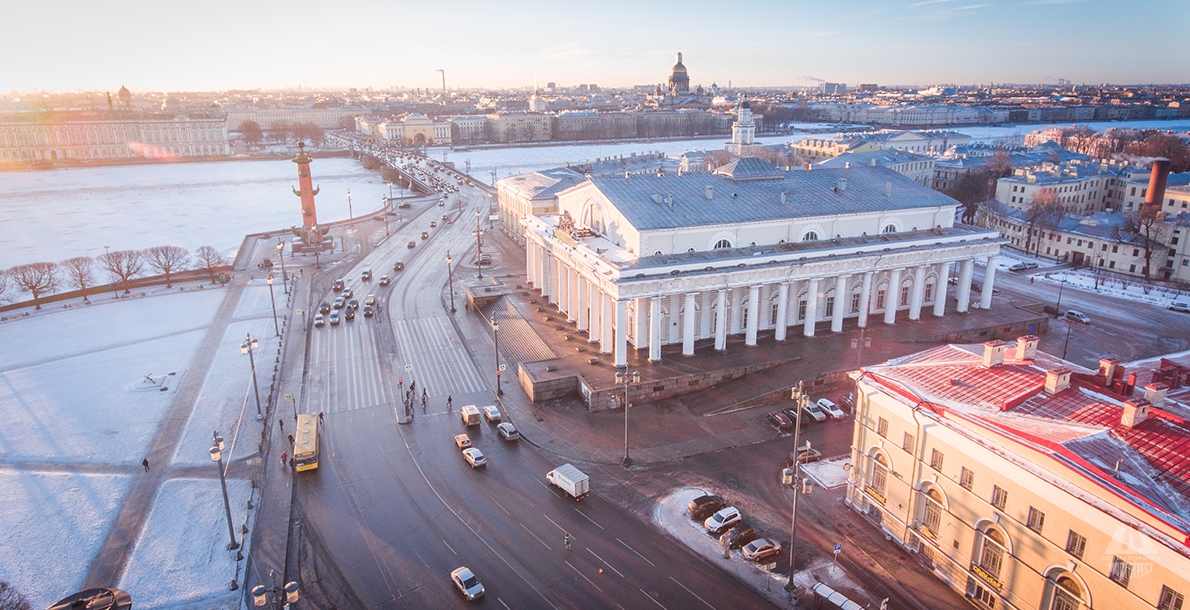 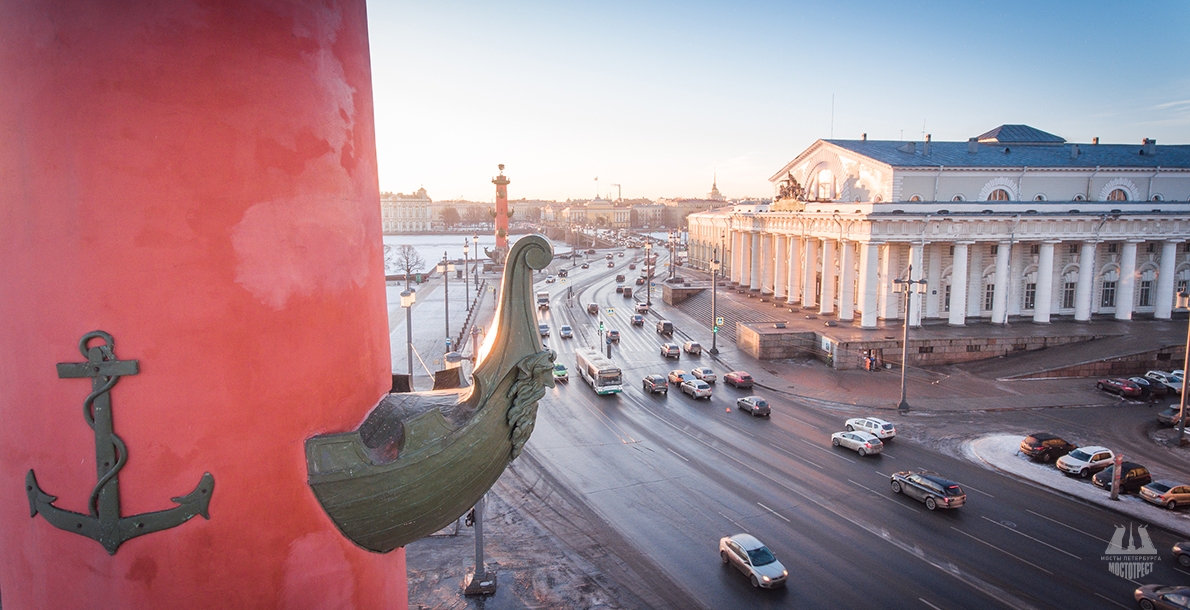 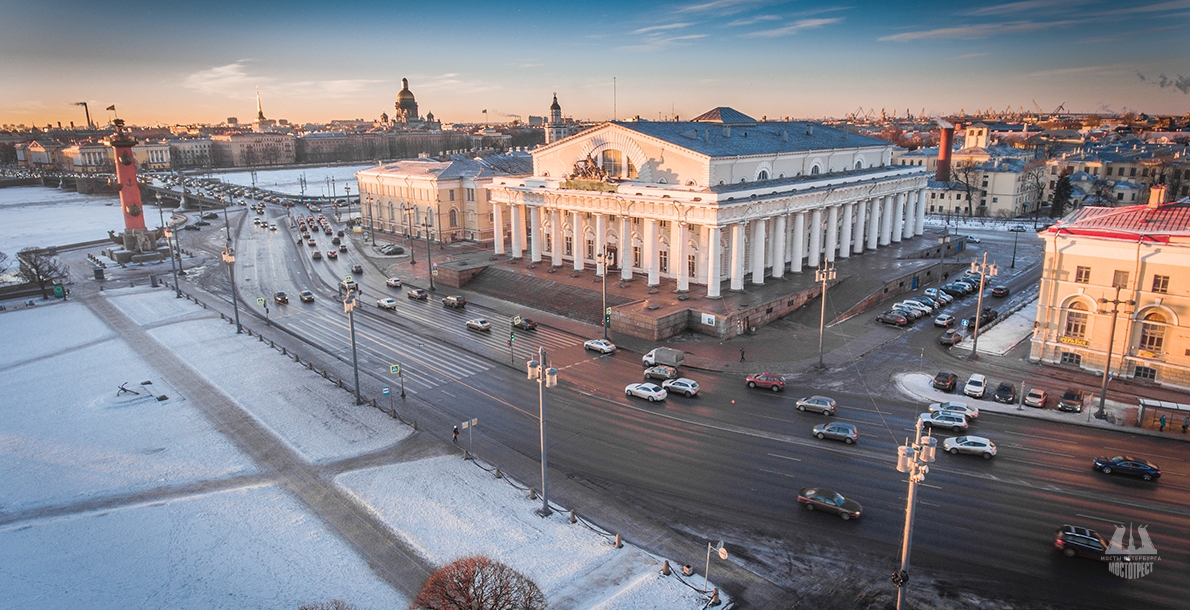 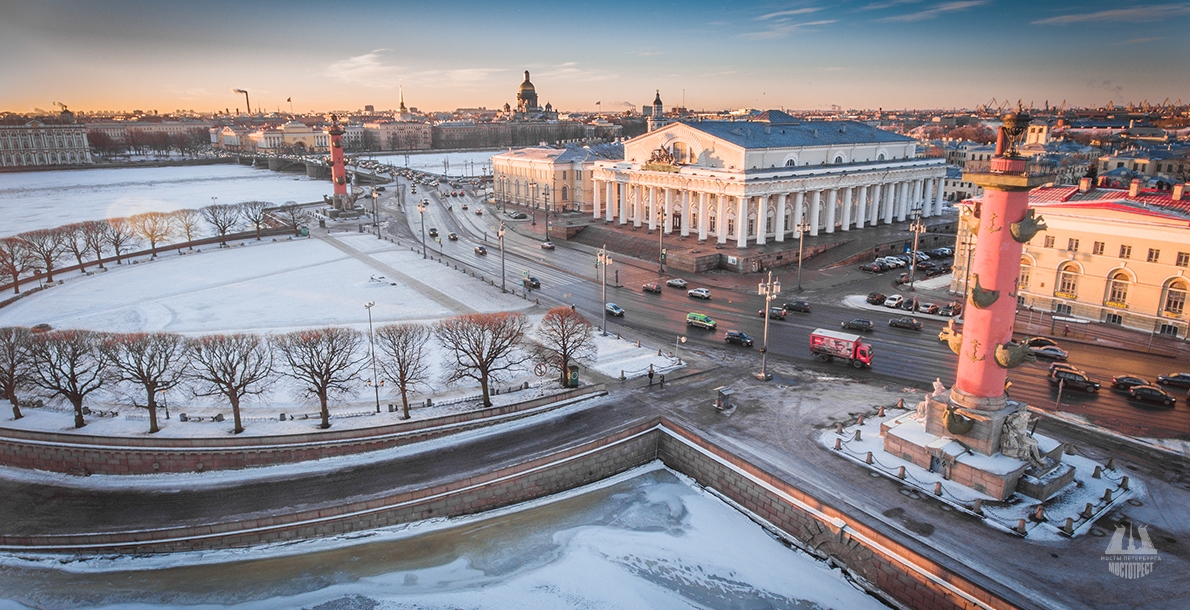 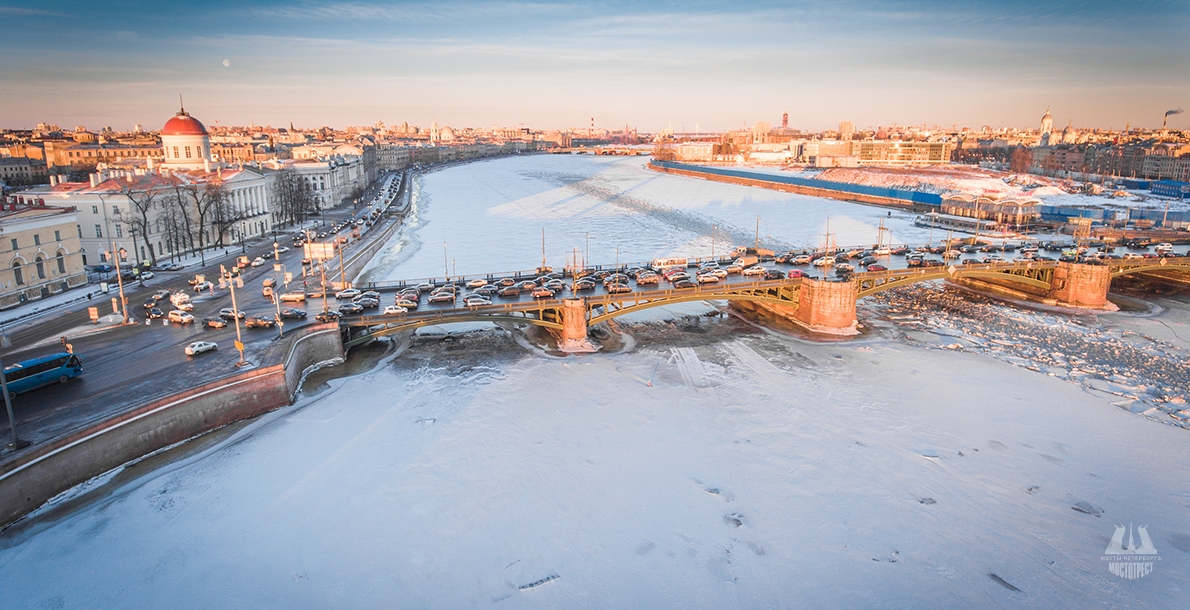 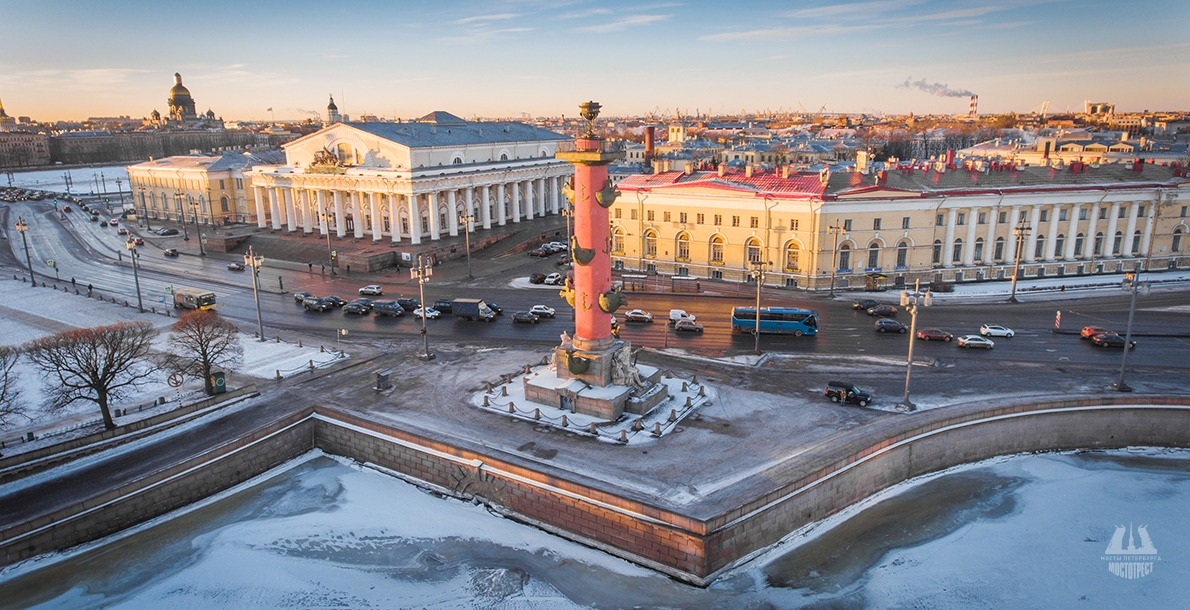 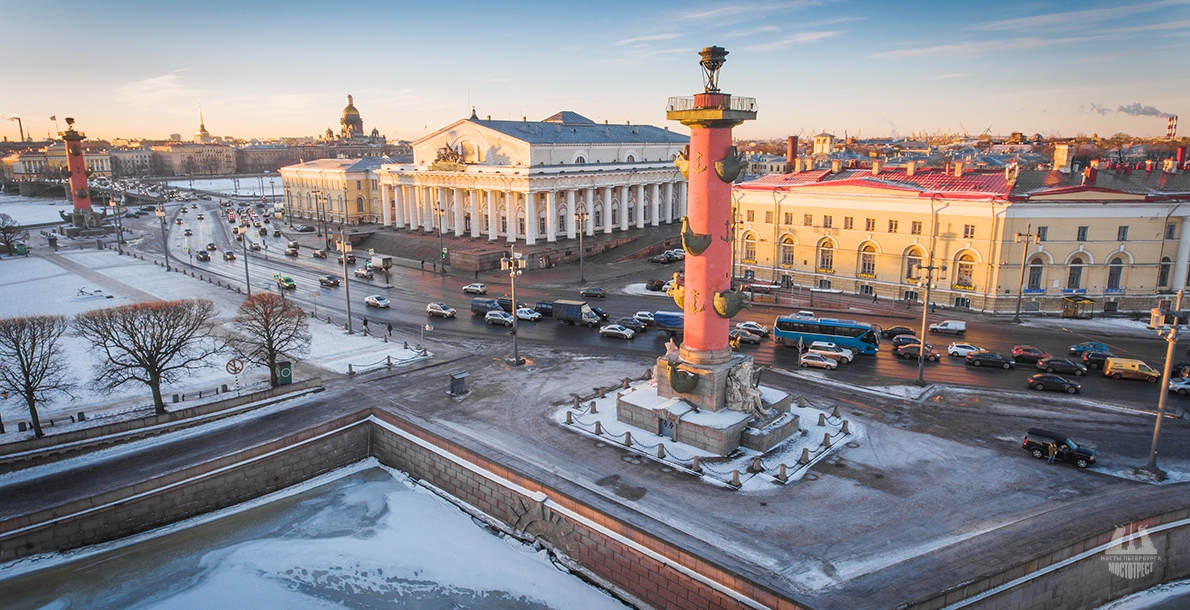 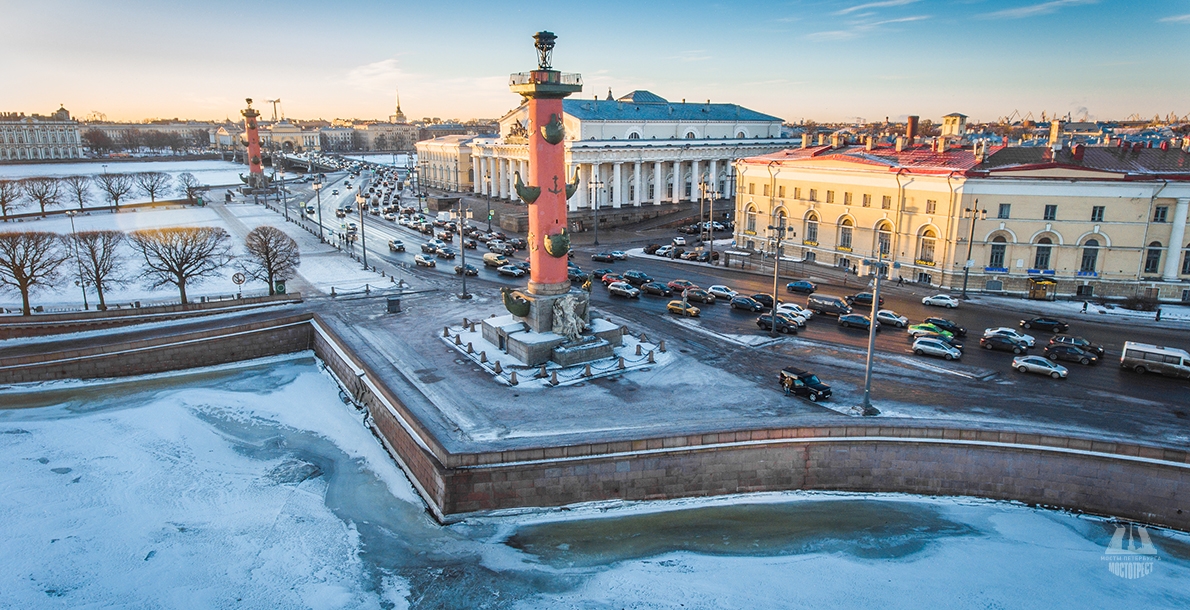 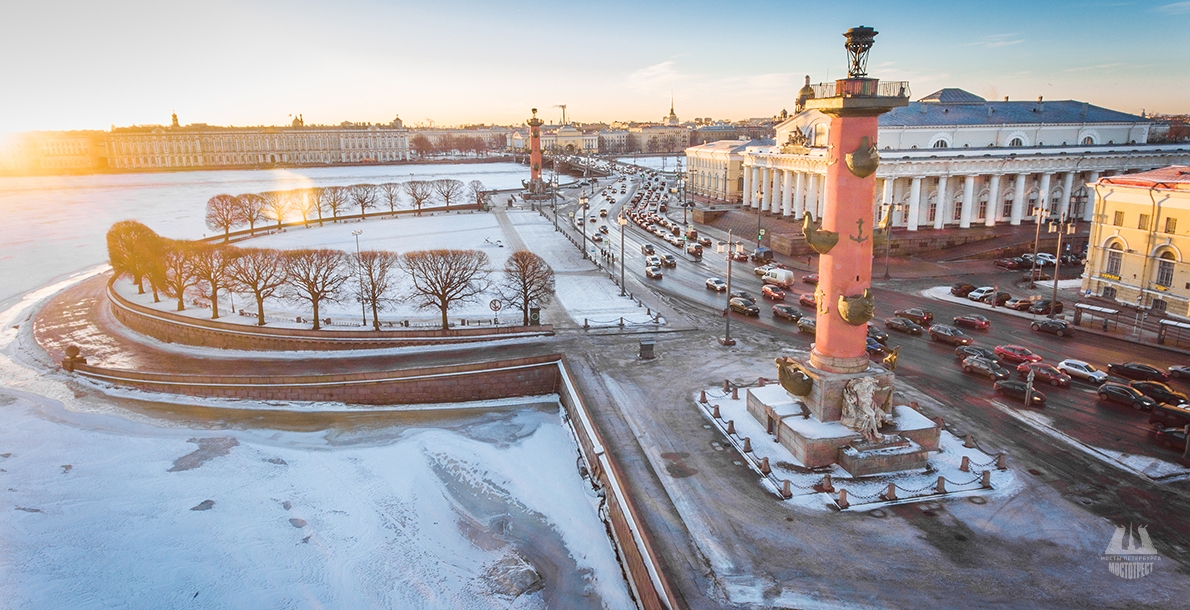 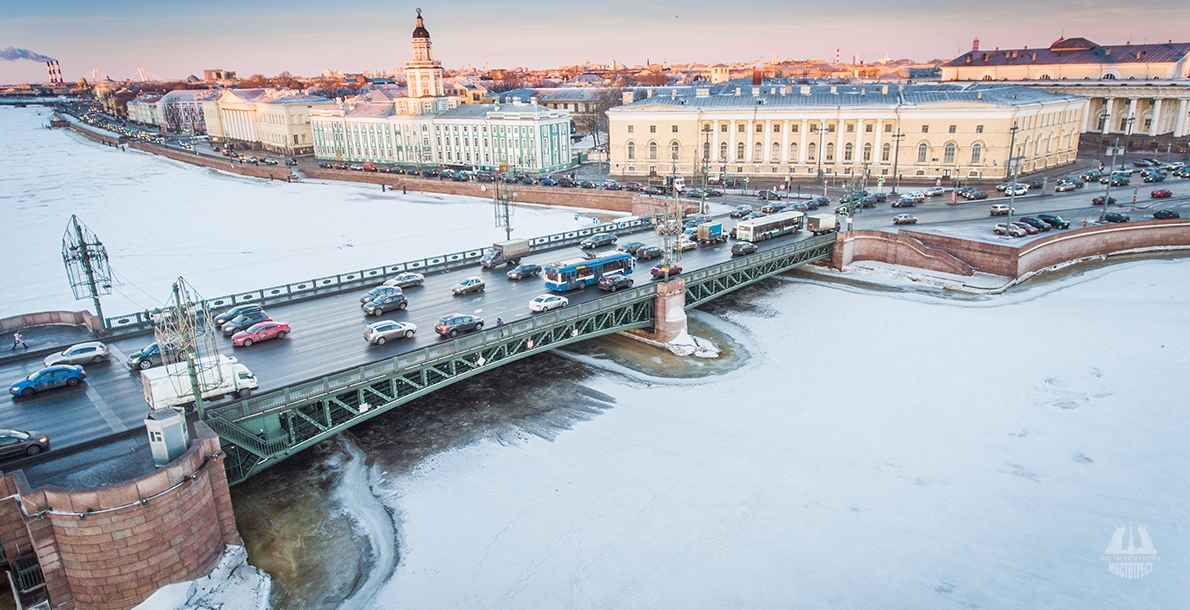 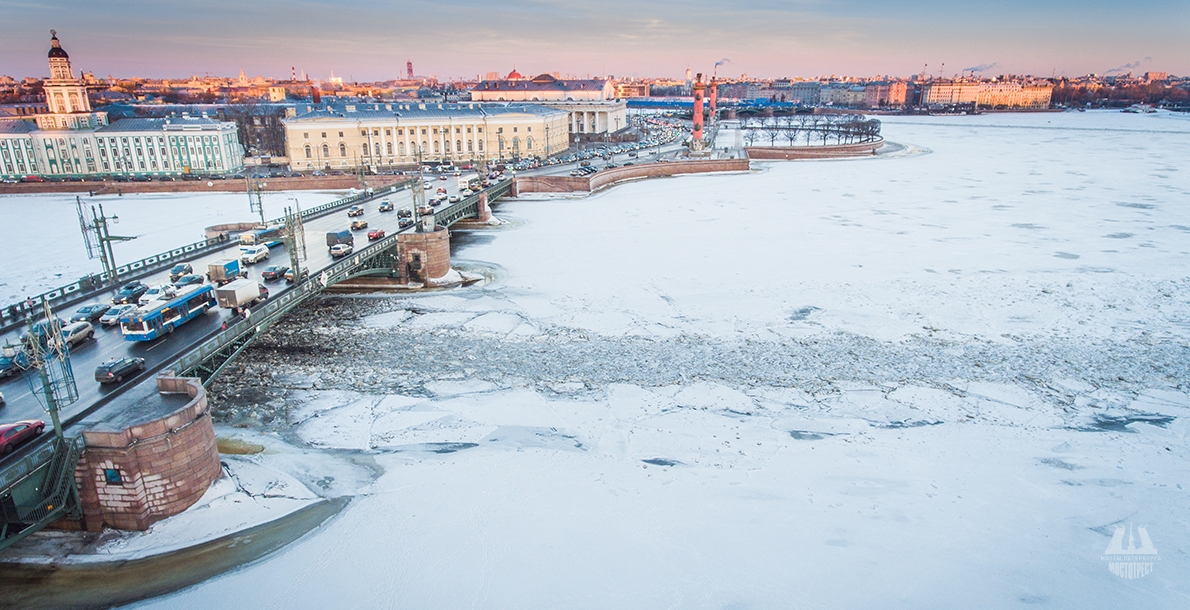 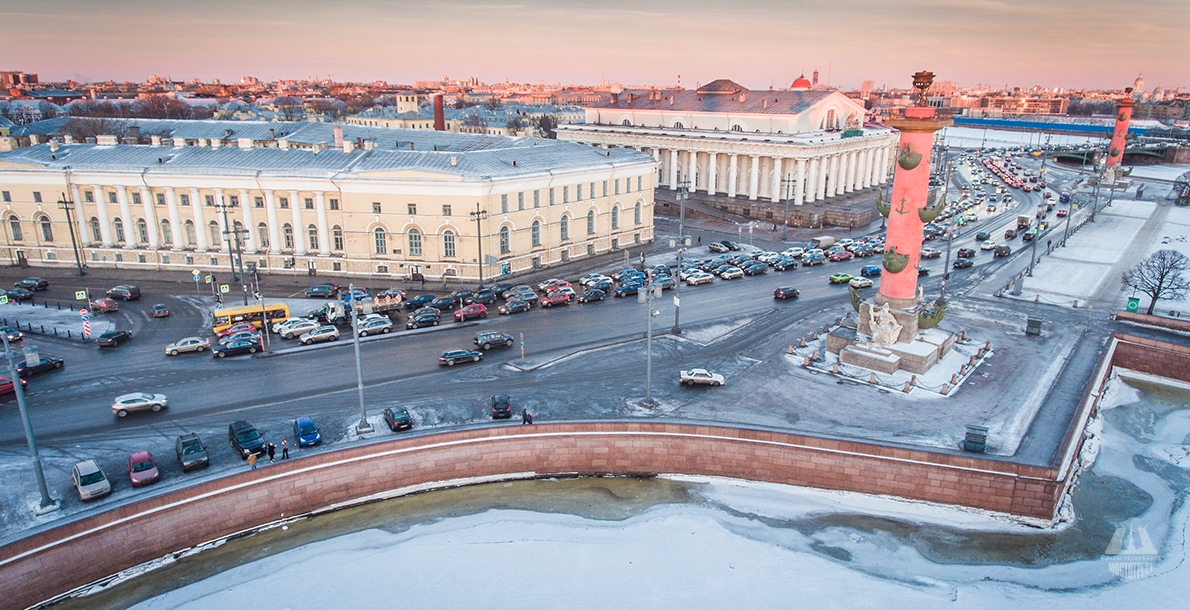 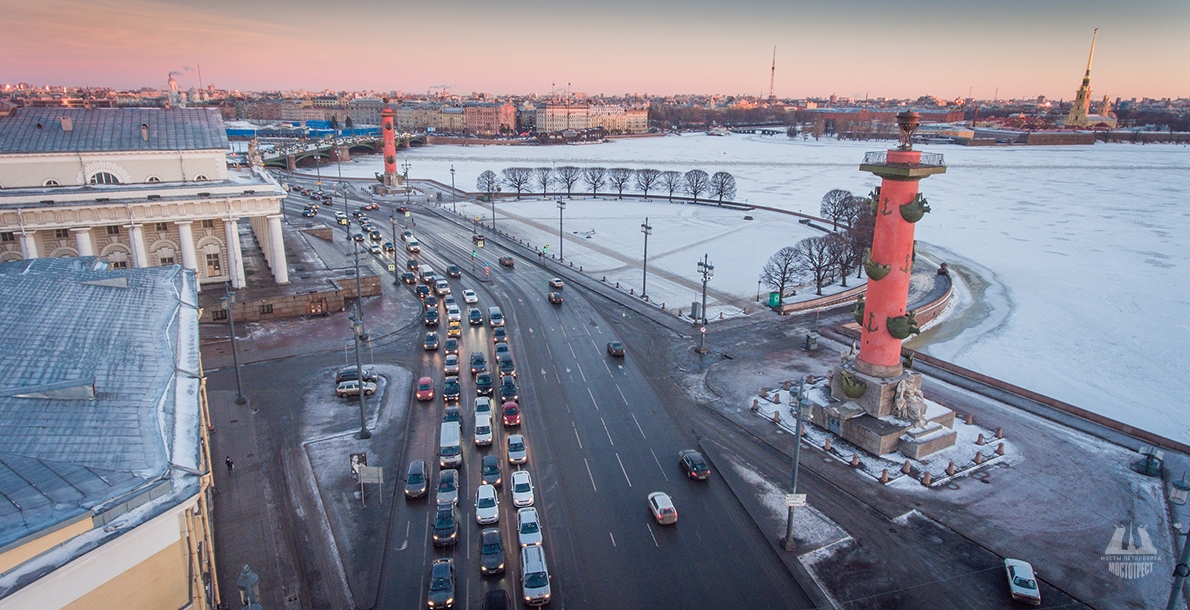 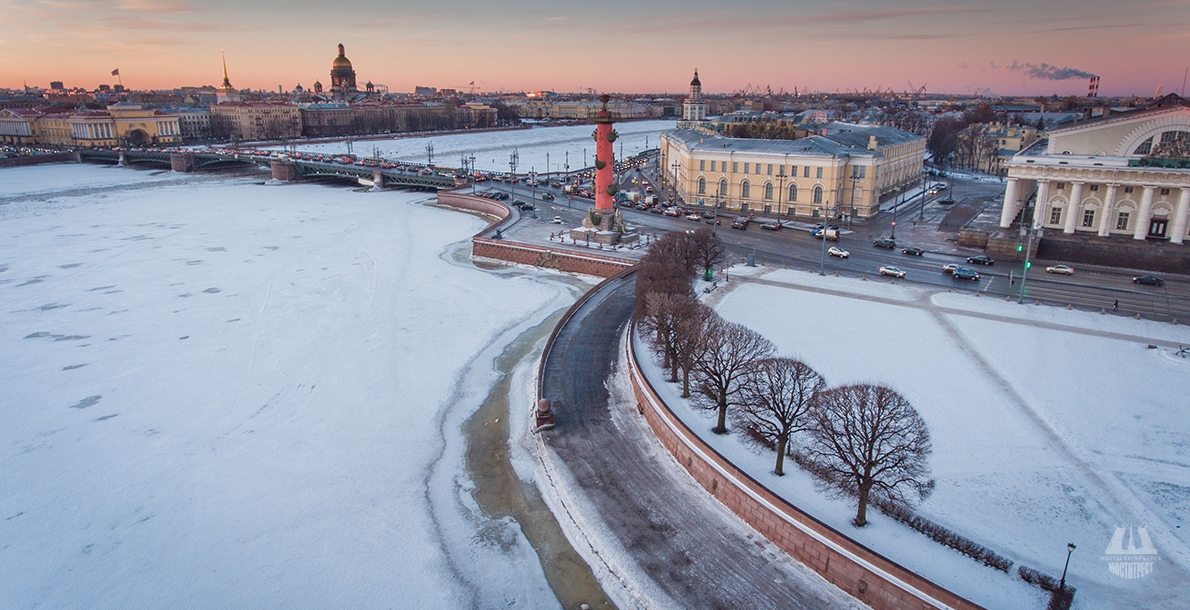 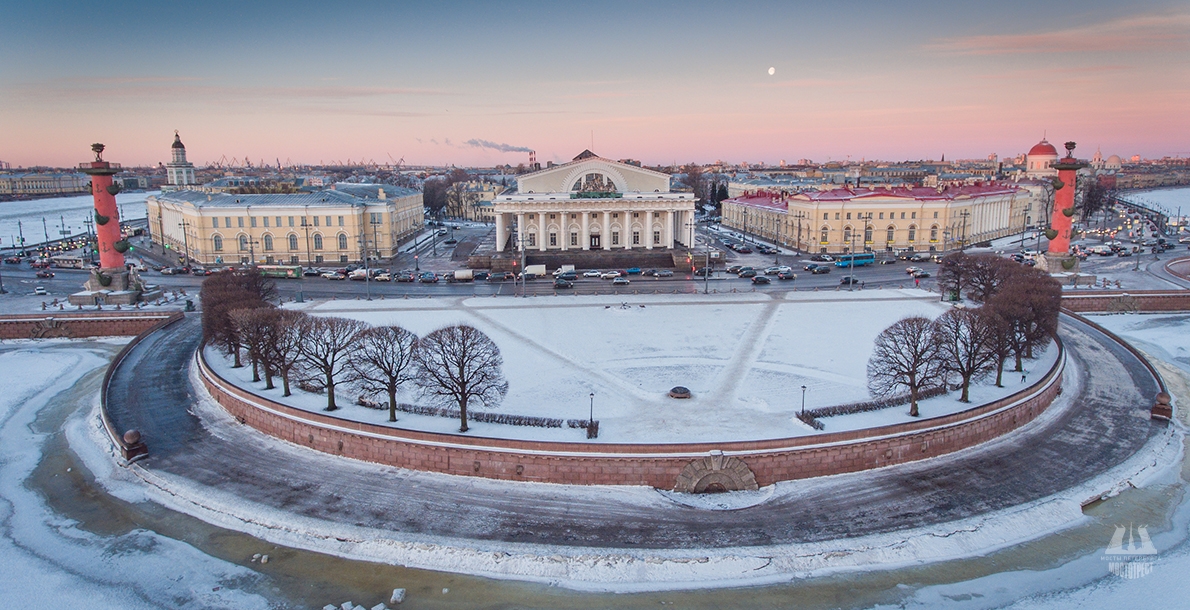 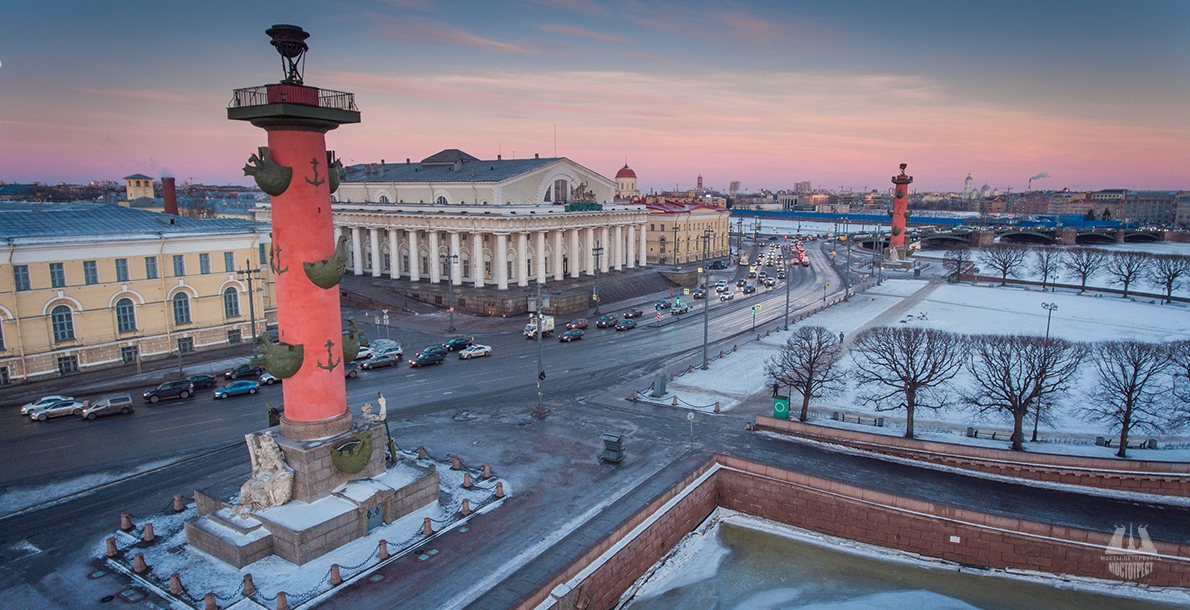 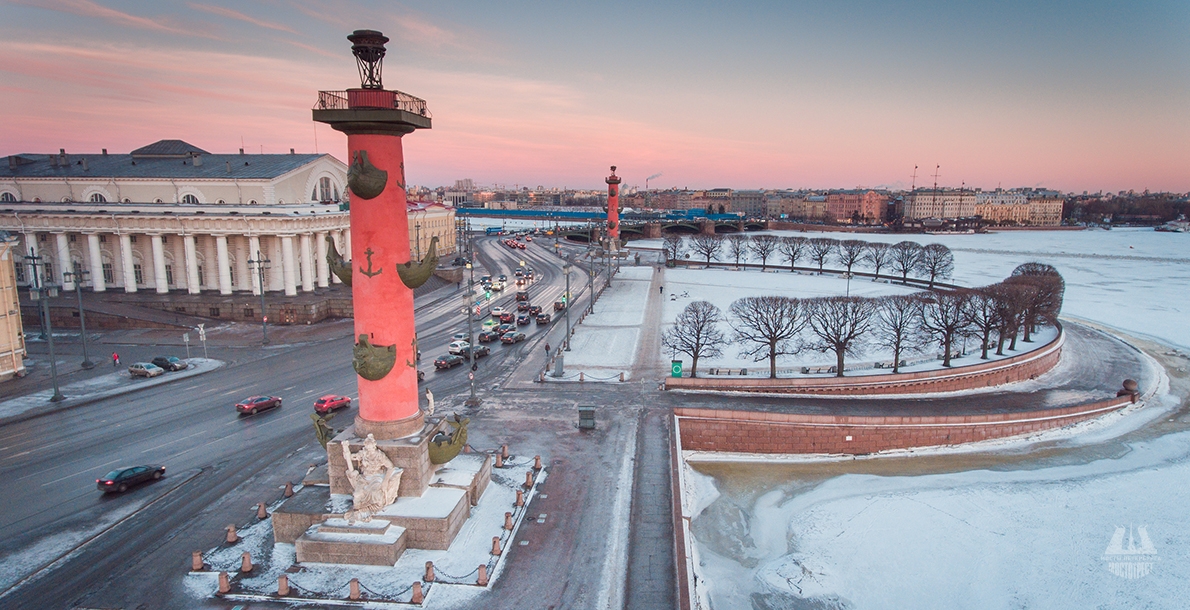 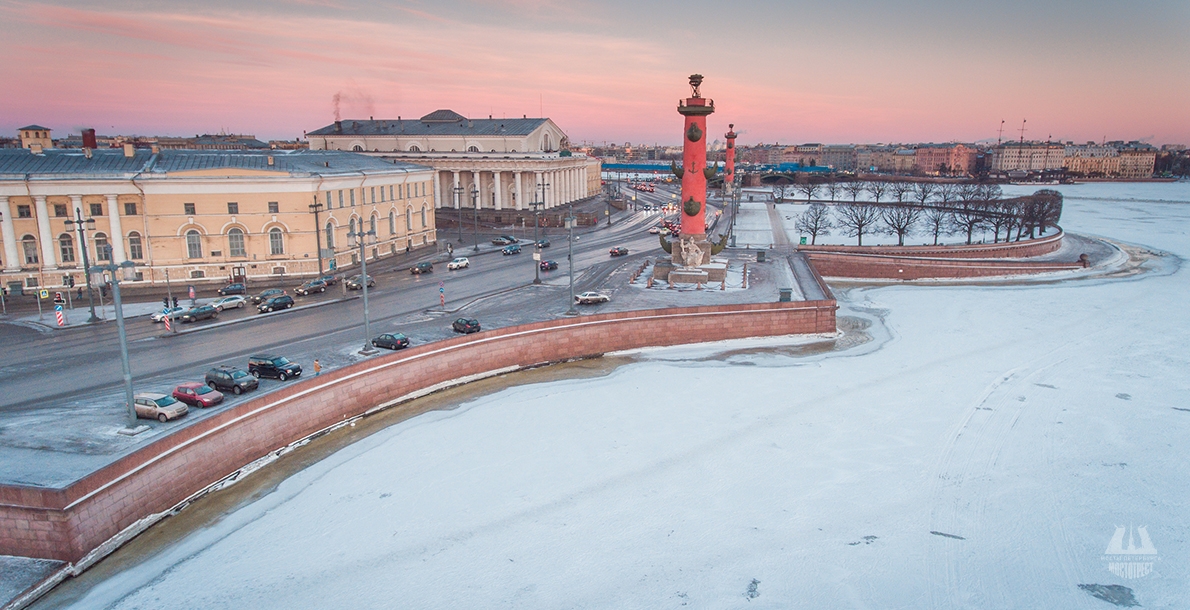 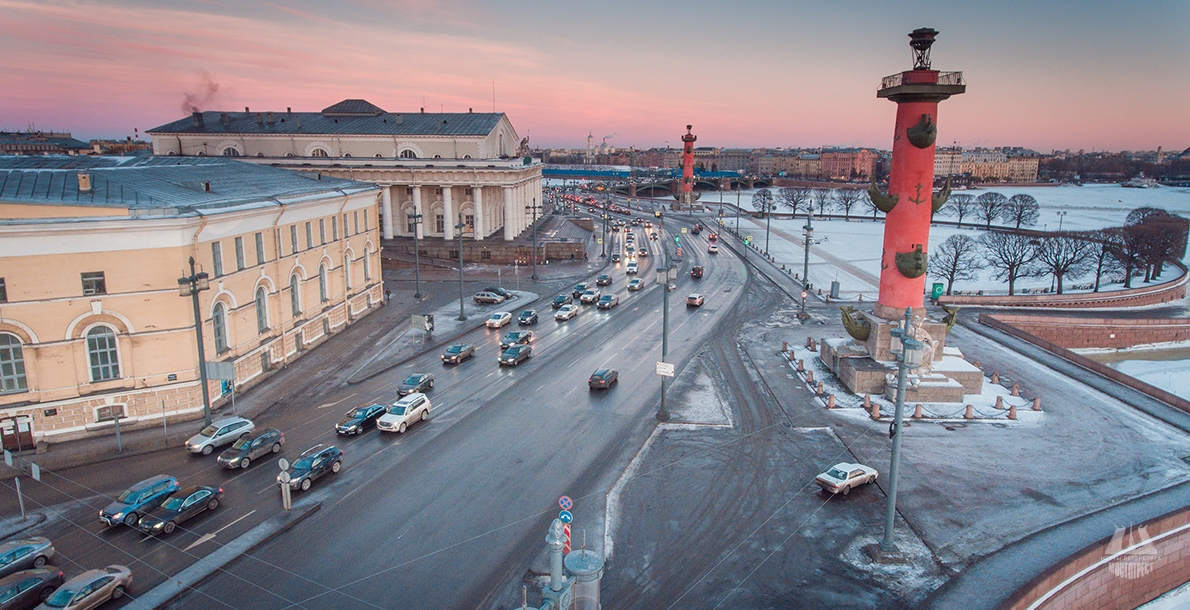 The embankment is located on the eastern end of Vasilievsky Island where the Neva River is divided into the Bolshaya and Malaya Rivers. The abutments of Birzhevoy and Palace Bridges are considered to be its boundaries.

The bank outline and the embankment layout changed depending on the urban problems, which were imposed by the time. When Peter the Great decided to arrange the centre of the city on Vasilyevsky Island, its end was constructed by estates of dignitaries. After relocation of the Commercial port from Kronverksky flow path to the mouth of the Malaya Neva River, the construction of warehouse and commercial buildings began there: Old and New Gostinyi Dvor, Stock Exchange buildings, warehouses and the Customs.

In connection with the construction of a new building of Stock Exchange, under the project of architect Tomas de Tomon, in 1805-1810 big filling of the ground was made which resulted in the bank line extension by 120 m to the river. Along the Stock Exchange axis the large descent was built with bent ramps to the river; the ramps ended with granite balls on pedestals erected under the same project of de Tomon.

The wall of the second tier of the descent was decorated with 12 stone masks of lions with decorative bronze rings. Rostral Columns were erected in projections of high massive embankment wall to the left and to the right of the descent.

In 1925-26 a park was planted on the square in front of Stock Exchange. In 1929 a wall of the lower descent area was rearranged. During the siege years the northern wing-wall of the embankment adjoined the descent was destroyed and restored in 1950, and in two years the ramps and the lower area were paved with diabasic blocks.

In 1963 lion masks were reconstructed as per the project of special scientific and restoration workshops under the supervision of architect A. L. Rotach.

During the construction of permanent Palace Bridge the descents with side stairs were erected at its right-bank abutment, on the upstream and downstream sides, and, additionally, on the upstream side the high massive granite wall was built which reached the existing wall bend angle at the nearest Rostral Column. During the construction of Birzhevoy Bridge the adjacent upstream wall elongated and became bent similar to the wall at Palace Bridge.

Thus, the formation of the embankment of the Spit of Valilyevsky Island was finished. From the side of the Neva River there was the bent descent, which was used as a base of Stock Exchange removing its outline from the water surface, and as if the huge granite balls were floating by themselves along the river during floods of the Neva River.

The Spit of the Vasilyevsky Island is one of the most popular places for newly wedded couples. And the Stock Exchange building has become very popular among young people keen on skateboarding.