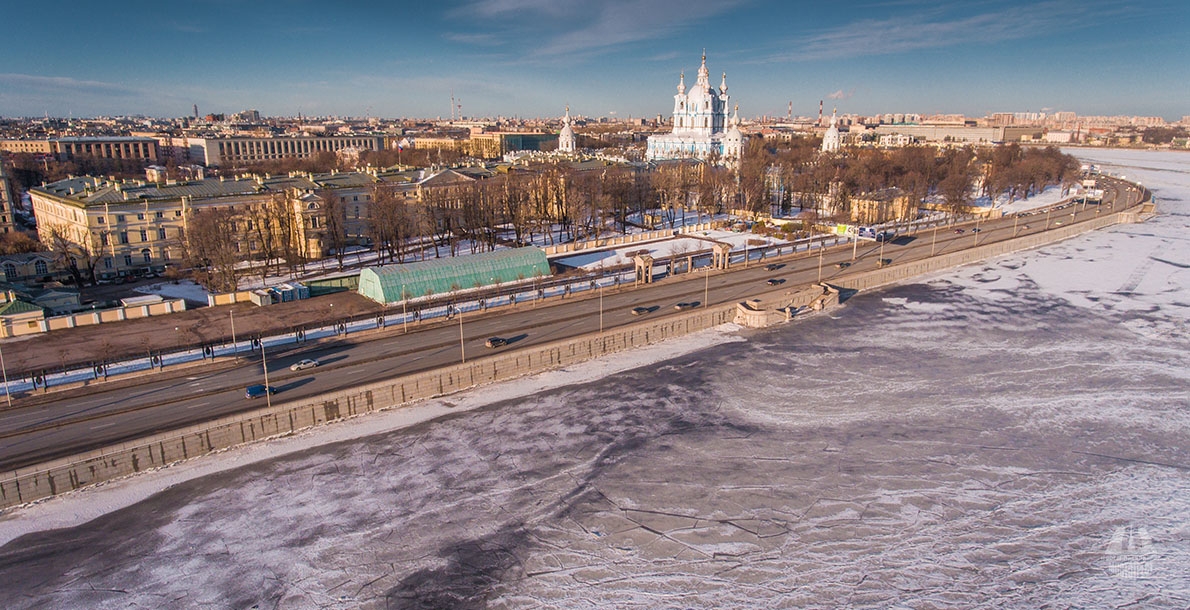 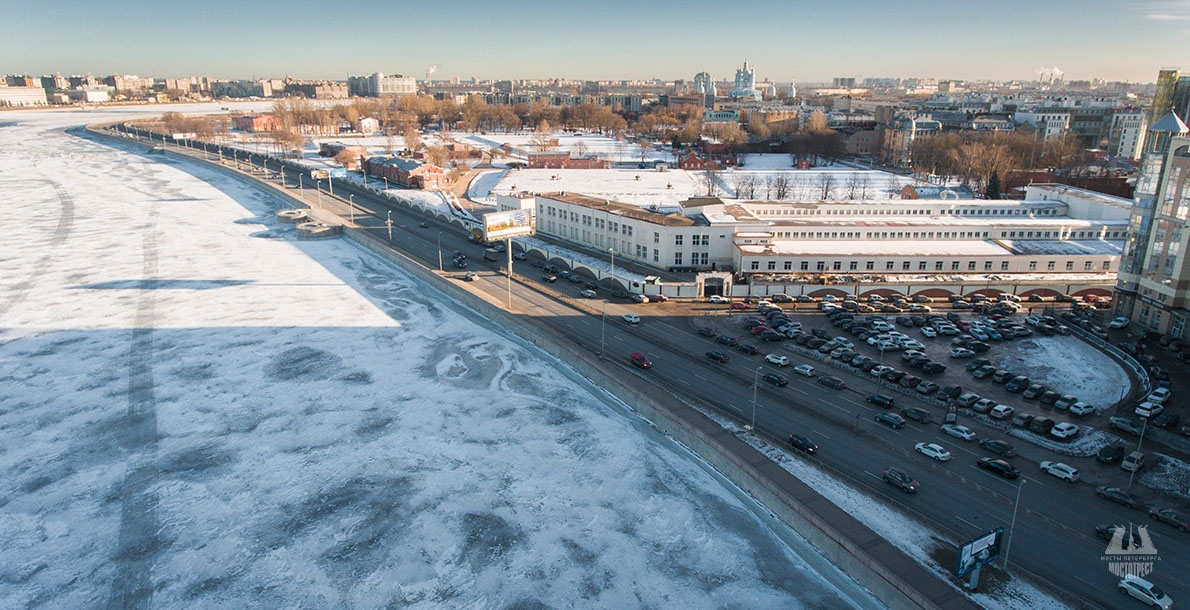 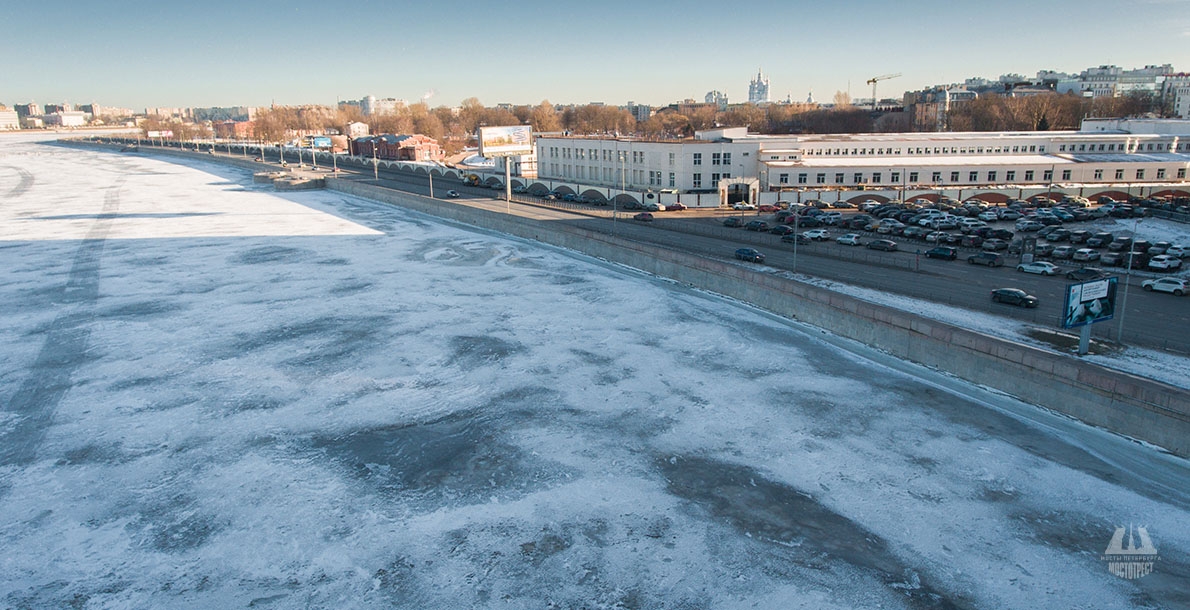 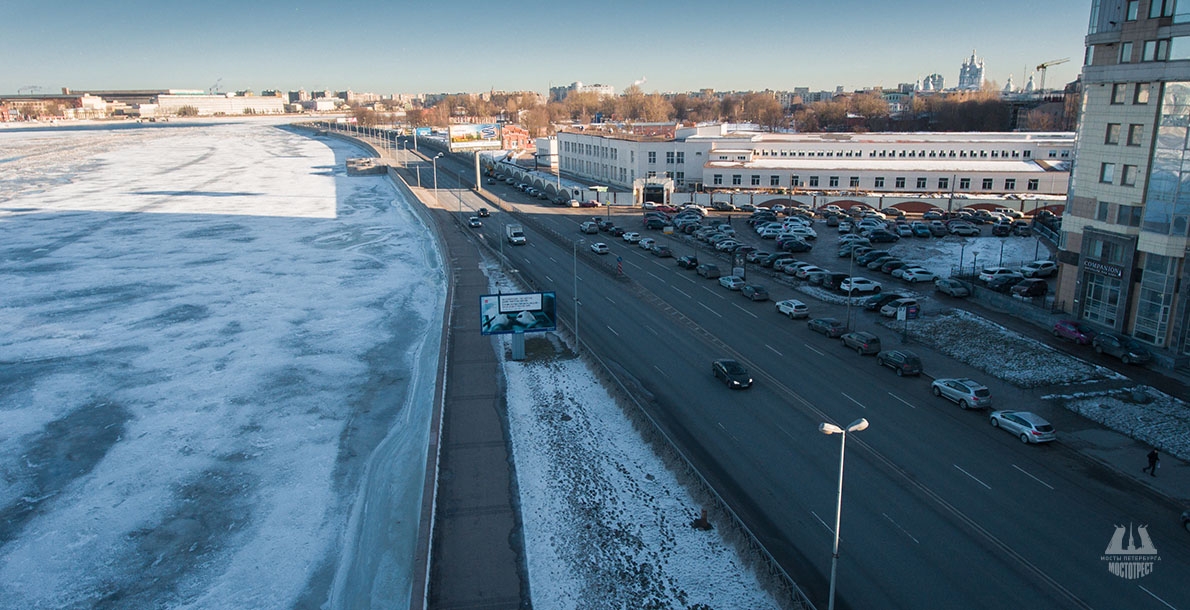 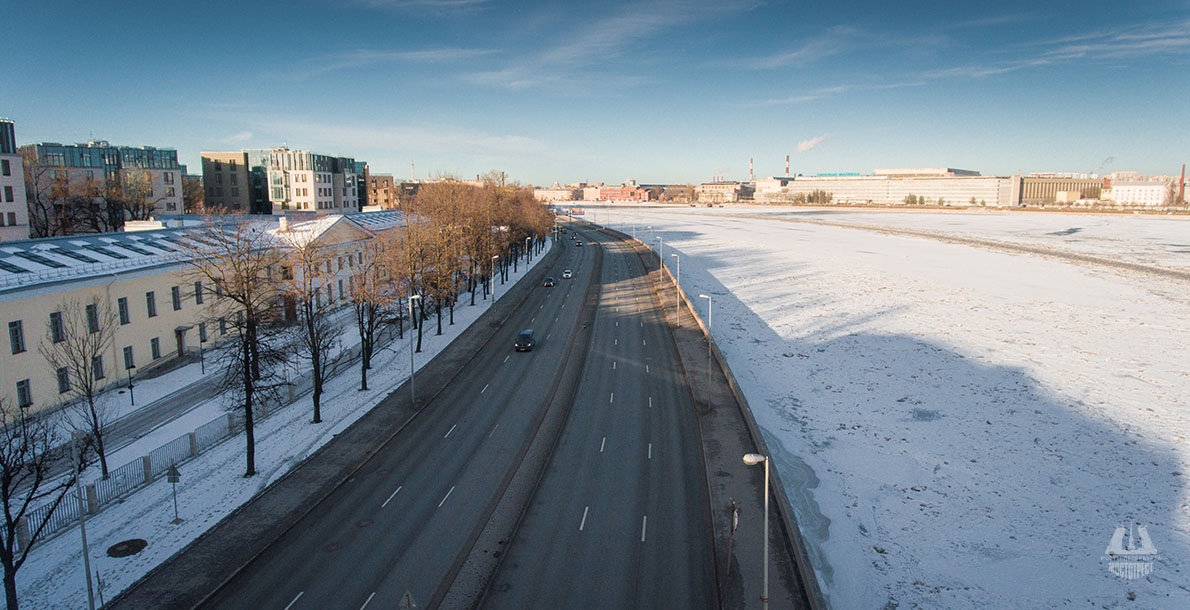 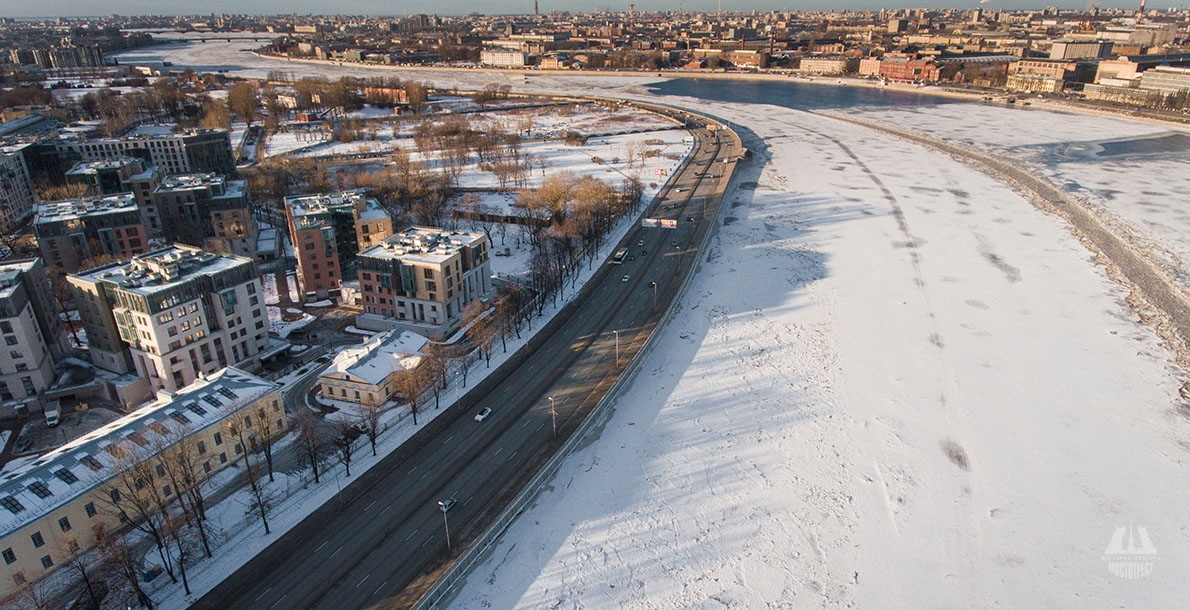 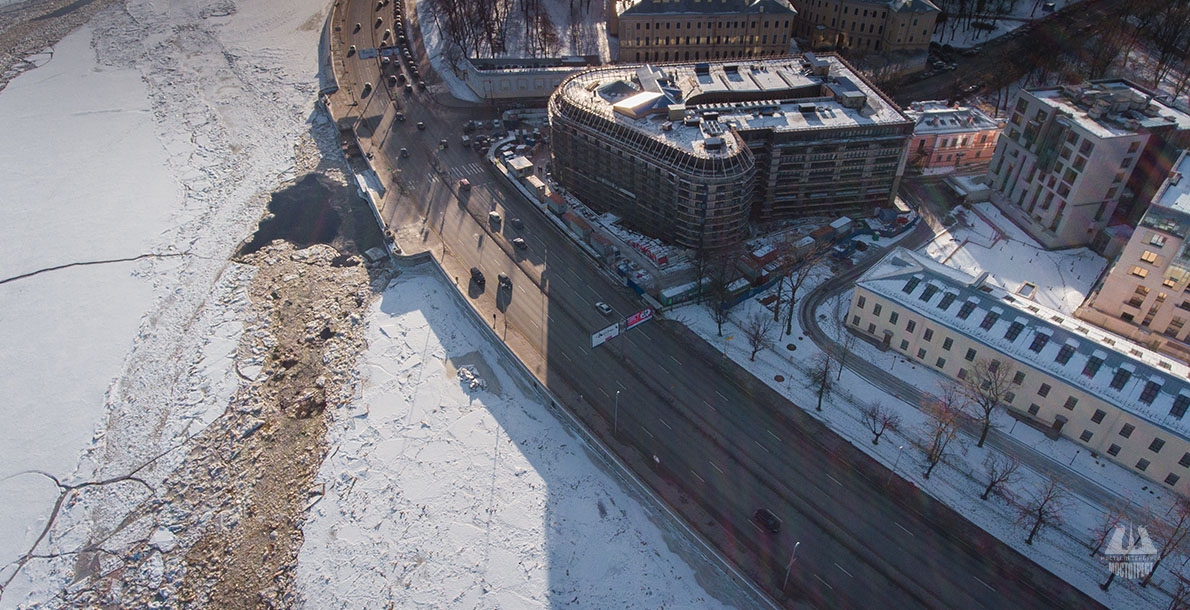 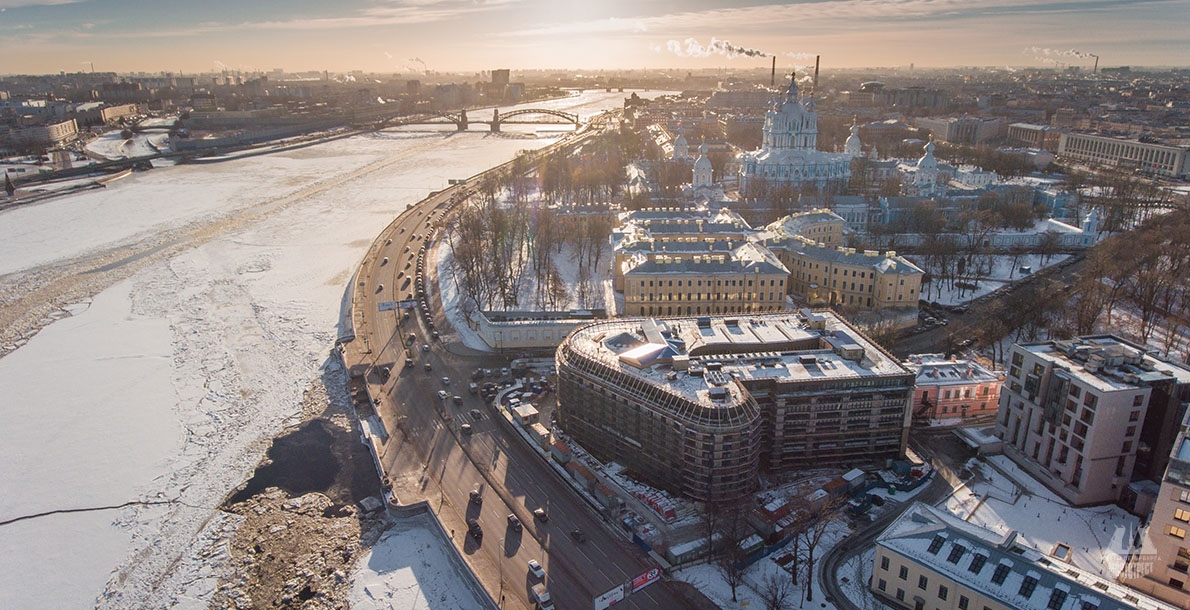 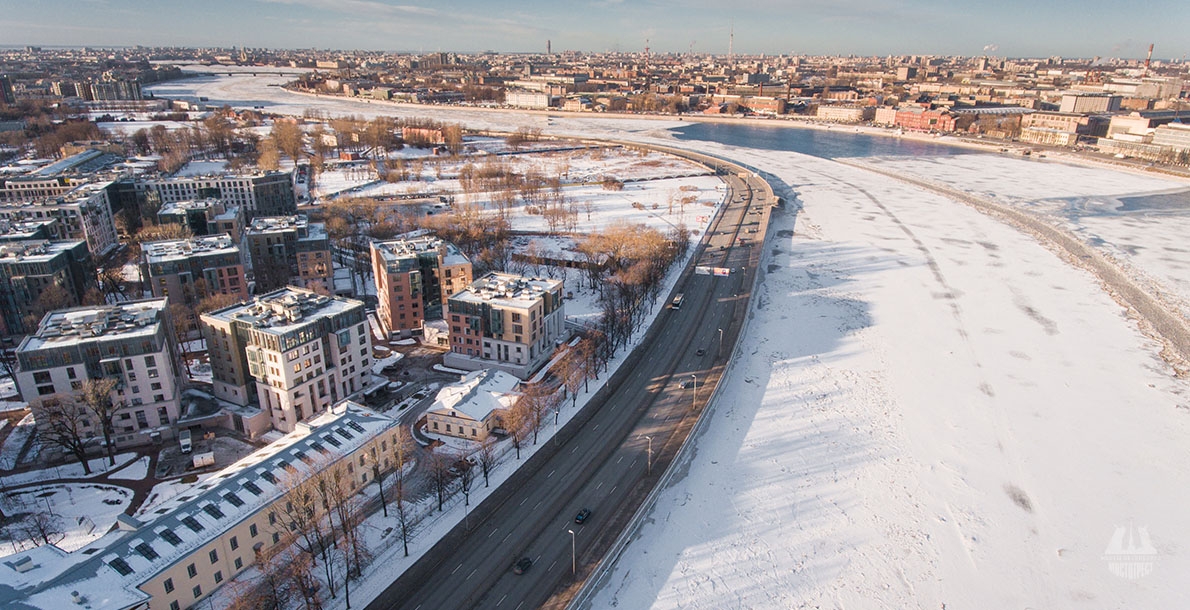 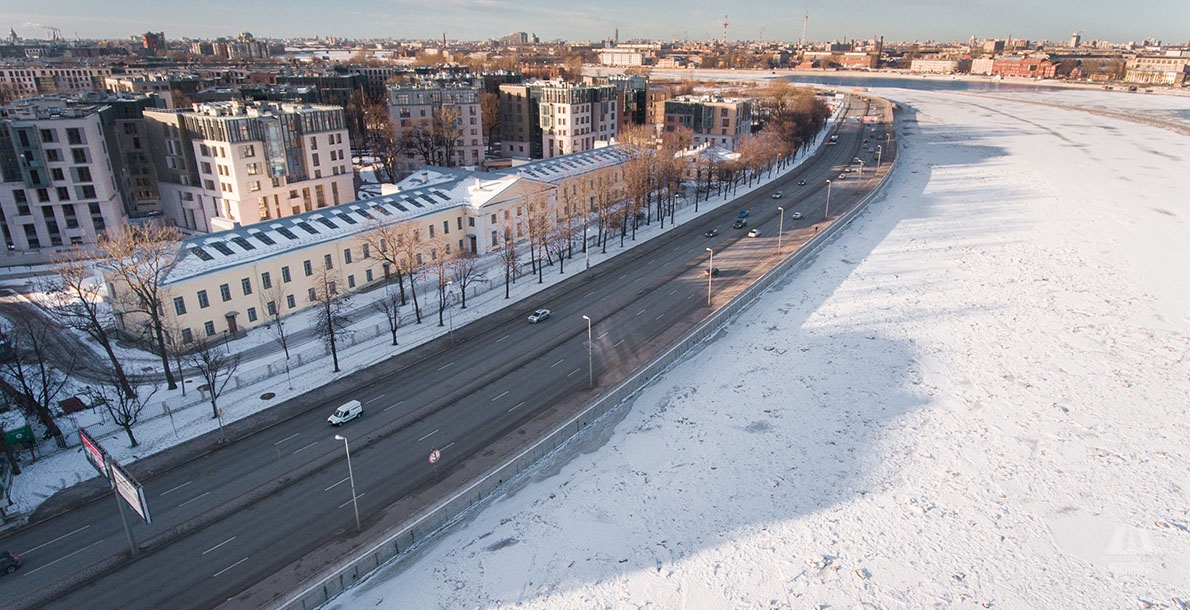 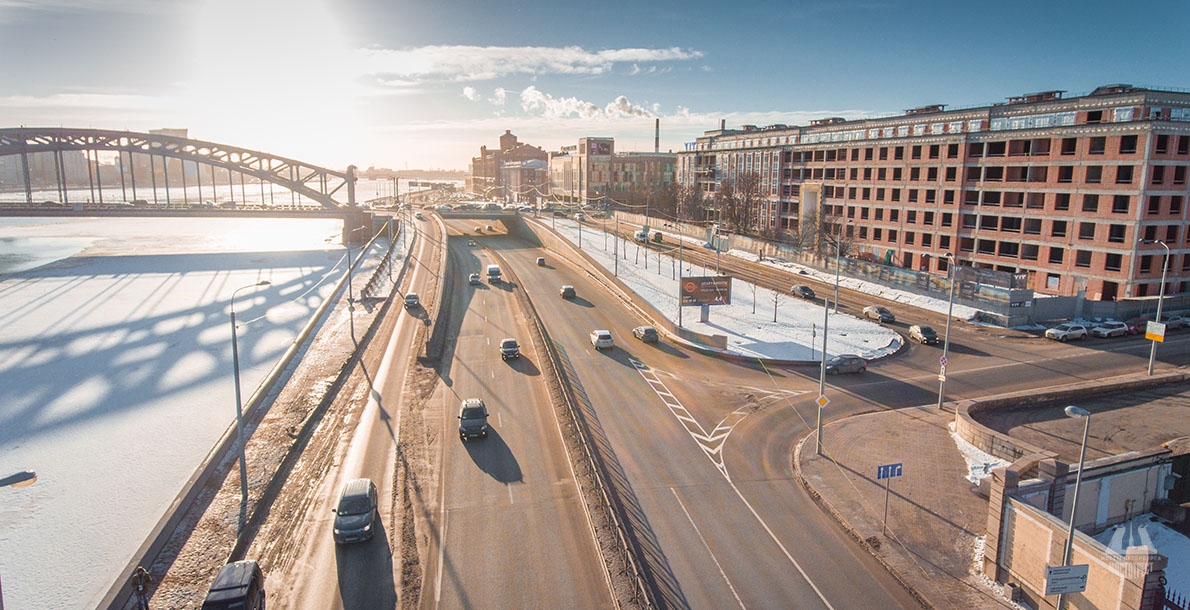 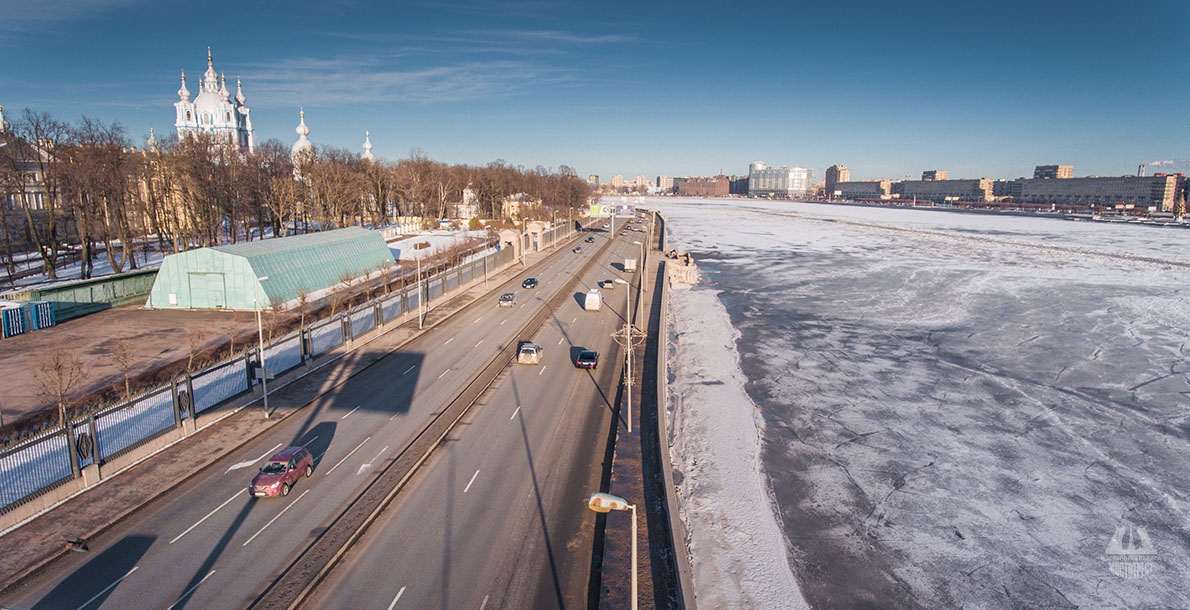 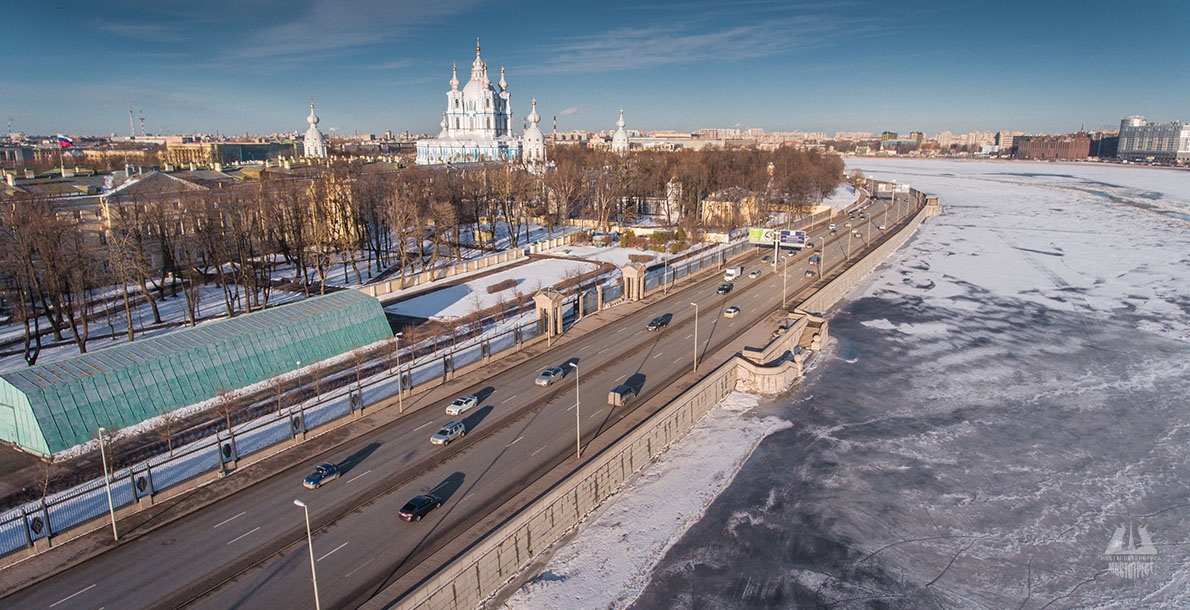 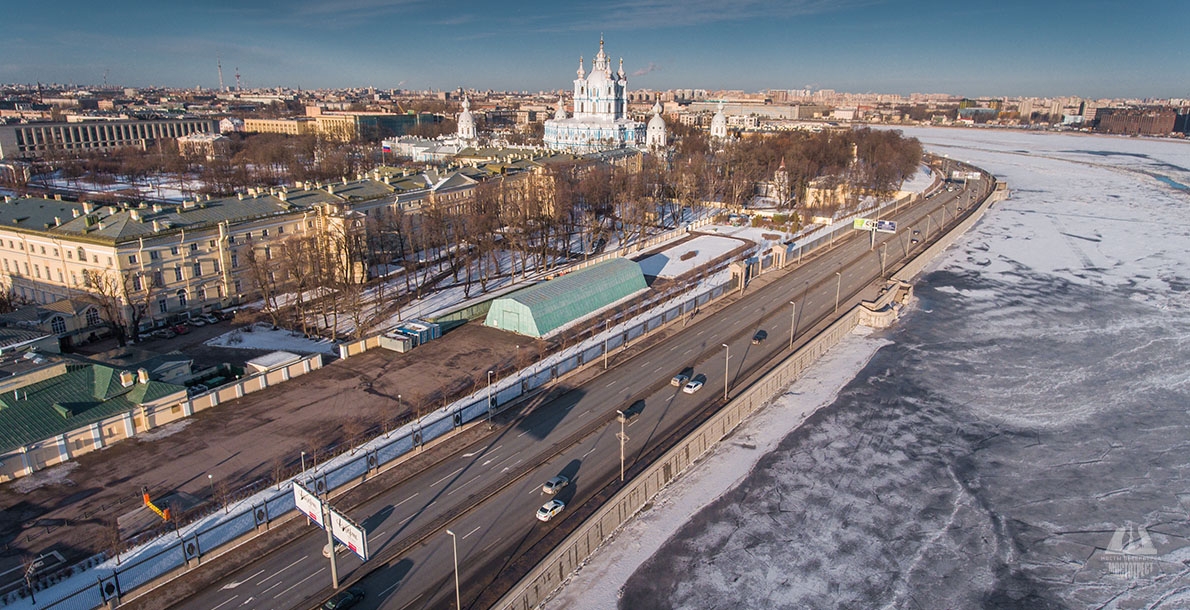 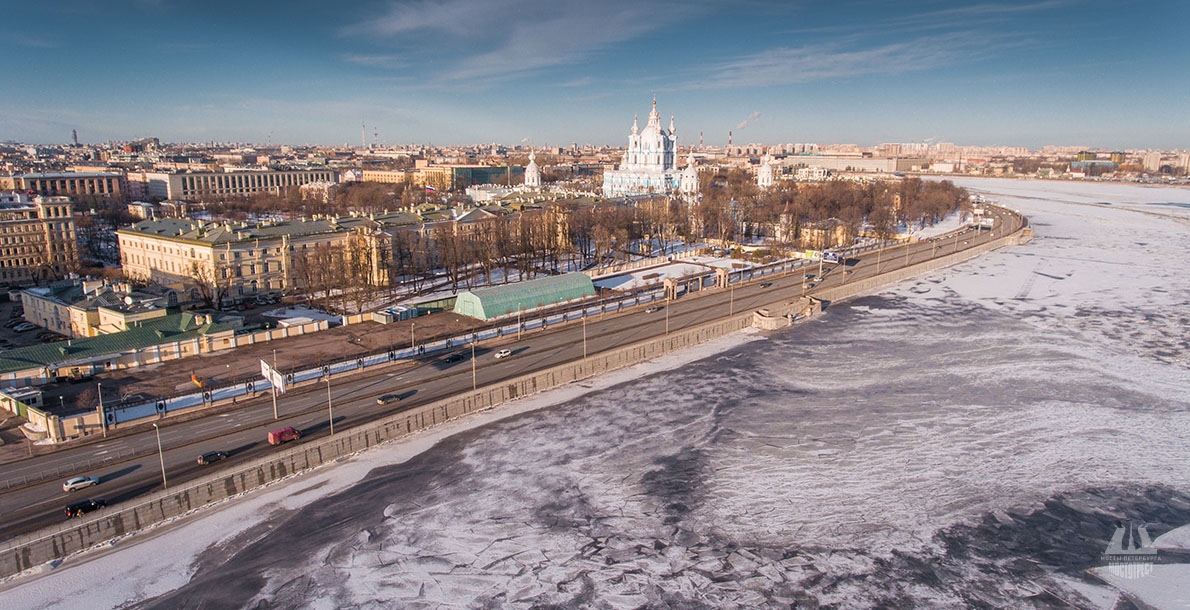 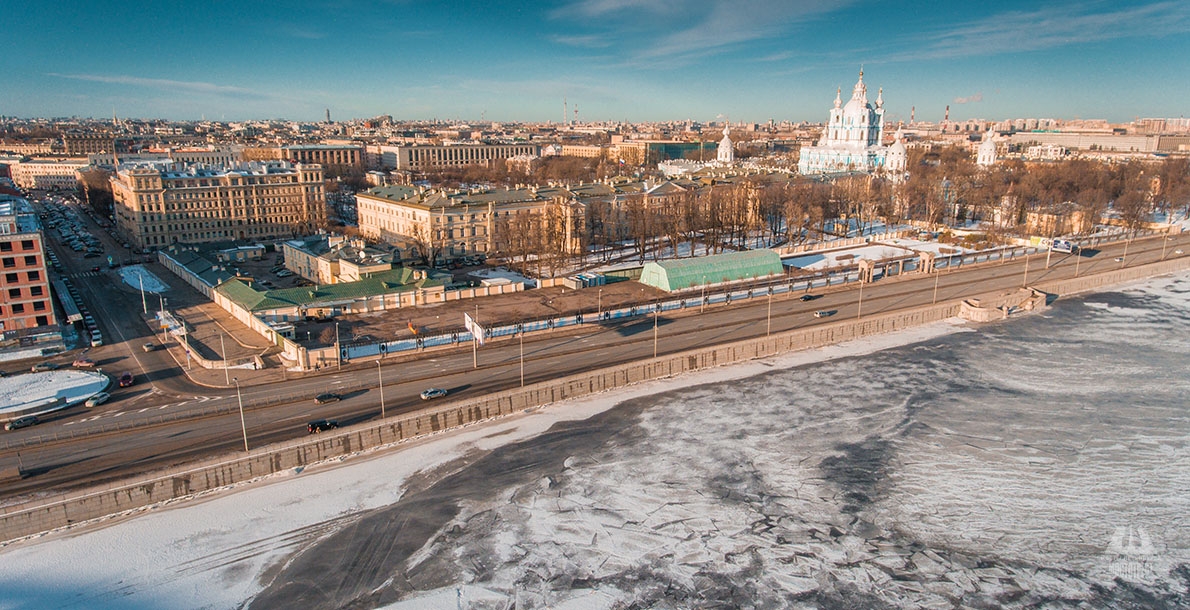 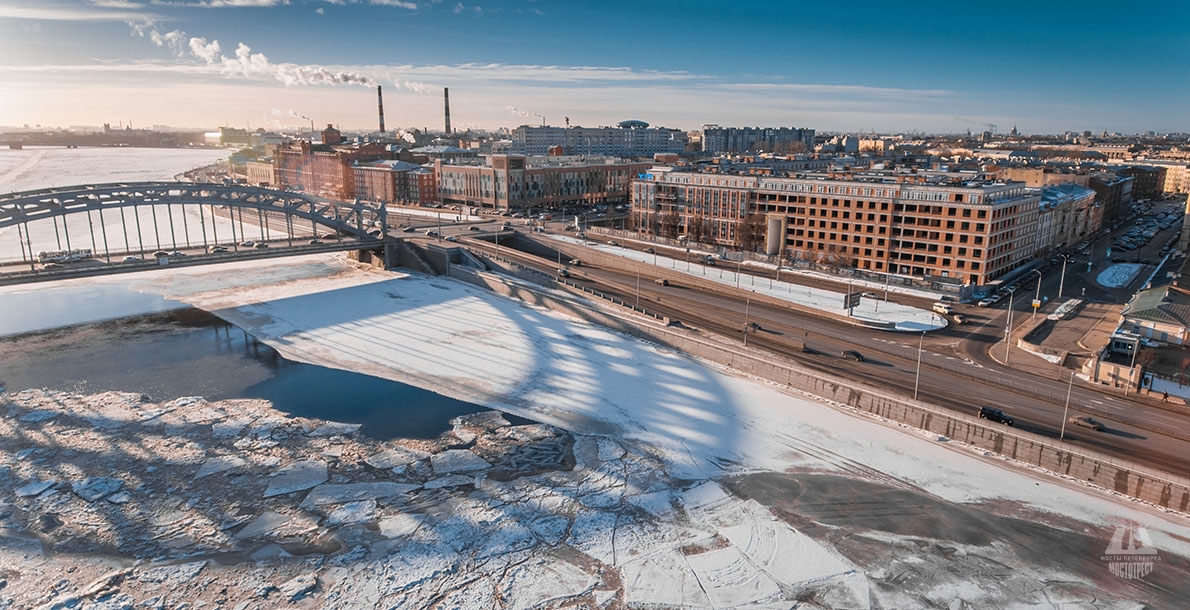 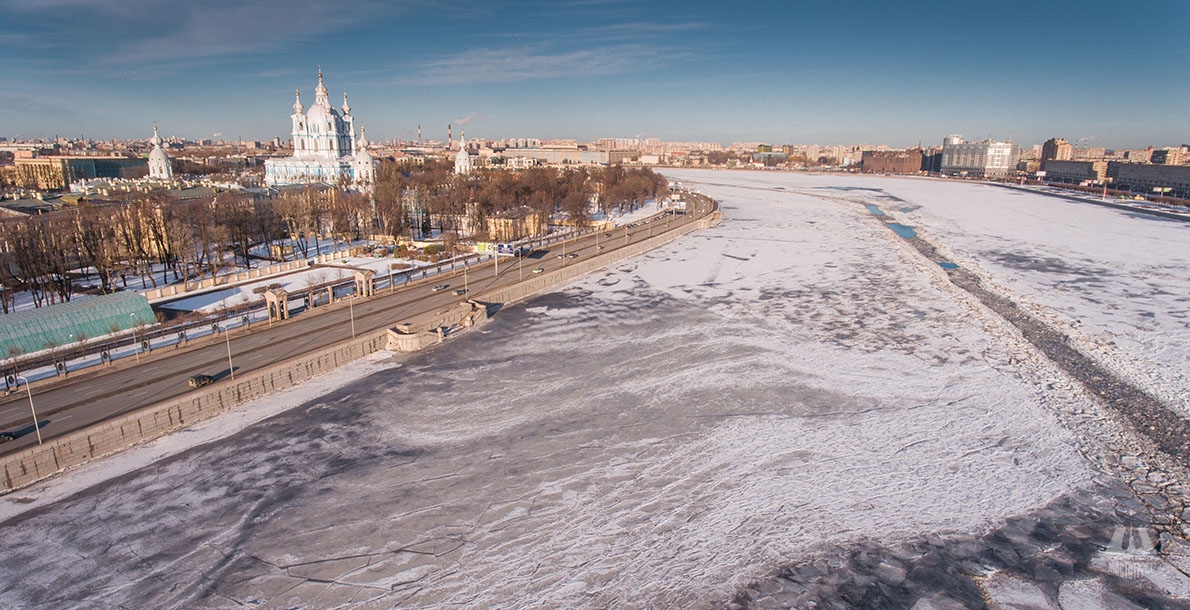 The embankment is located on the left bank of the Neva River downstream of Bolsheokhtinsky Bridge. It extends from Smolny Prospect to Vodoprovodny Lane. The embankment has its present name since 1887.

The river bend where the Neva River turns its flow to the West, was habitable from the dawn of time. In the XIII century there was settlement of Novgorod - Spasovschina (Spasskoye). At the beginning of the Great Northern War, Swedish fort Sabina was erected – in front of the Nienschanz Fortress, on the opposite bank. When Peter the Great conquered the Neva River banks, the Swedish Fortress and fort were destroyed. Shortly after founding of St. Petersburg, a place on the left bank of the Neva River was taken for the arrangement of Smolyanoy (resin) yard. Resin and tar were needed for construction of ships at the Admiralty Shipyards. In the first half of the XVIII century Smolny yard was moved to Vyborg Side, but this area got the name Smolnoye.

Once the area adjacent to the Smolny yard belonged to the daughter of Peter the Great - Elizabeth, who spent many years there in a country palace. On accession to the throne the Queen has decided to build a nunnery on the place of the palace. Since that time, the complex of Smolny buildings traced its history back to the middle of the XVIII century.

The history of the architectural ensemble began from the erection of the Voskresensky Novodevichy Convent which soon became known as Smolny Convent. The Smolny Institute building was built in 1806 for noble maidens. Thus, the riverbank was built.

By 1897 the slope of the riverbank along the area of Gromovskaya Yard was strengthened with stone blocks resting against a timber strip. The timber strip was fixed on wooden piles driven with a certain pitch at the slope toe along the bank length. On the slope berm there were railing columns, the sidewalk and roadway were paved. Along the embankment across the flow paths to the internal basins there were 5 wooden bridges, which were filled by 1914. Later the banks reinforcement continued upstream.

In 1959, under the project of engineer A. D. Gutzeit, the bank line downstream of Bolsheokhtinsky Bridge was arranged. A gentle slope was designed. At the length of 330 m the stone paving lodged the timber fastened on the wooden piles. On the next 336 m the stone paving bumped into stone backfilling on the river bottom.  Opposite the Smolny Yard a pier was kept (currently, it is the main descent).

In 1996-1998, due to Bolsheokhtinsky Bridge reconstruction, the embankment banks were reinforced at the area from Smolny Street to Orlovskaya Streets using long-life materials.

During this reconstruction of 1998-2001, the embankment was significantly extended, a dividing line was arranged on the roadway, granite descents to the water were erected, lighting supports and Smolny Park metal railing were installed.