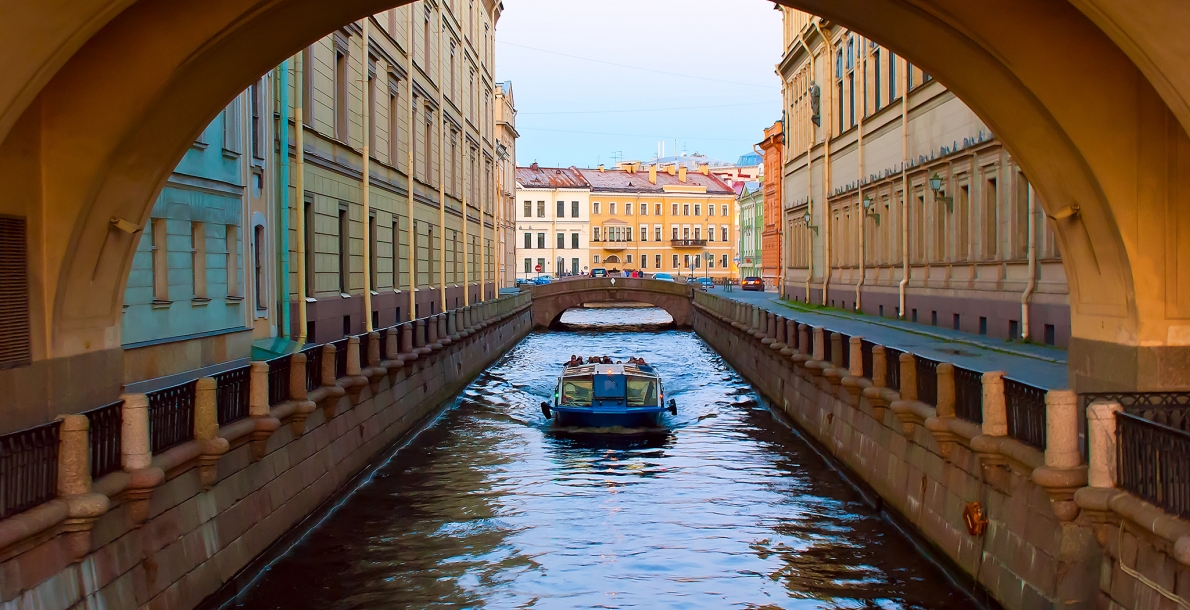 The Winter Canal is one of the oldest canals of the City. The canal connects the Neva River and the Moyka River being perpendicular to the Neva River.

At the end of the XVIII century the canal embankment was called Postal Embankment - after the Post Office Yard located nearby.

Originally, the stone wall of the embankment was installed on wooden grillages filled with stone, but the wall was unstable. The area at the canal head began to change due to construction of the stone Palace Embankment.

In 1783-1784 the canal walls were installed on continuous foundation made of driven wooden piles. The wall body consists of stone masonry with facing of granite blocks.

The railings of the embankment on the section between Hermitage Bridge and the 1st Winter Bridge is a Gothic forged lattice between the hewn round bollards. Due to insufficient width of the embankments on this site railings are installed on special granite brackets.

In 1929-1930 the embankment section on the left bank adjacent to the 1st Winter Bridge was repaired.

In 1934, under the project of architect K.M. Dmitriev, reconstruction of Hermitage Bridge was performed. The scope of works included the Winter Canal Embankment repair. The granite facing and stone masonry reinforcement were rebuilt while maintaining the structure appearance in details.

In 1950 skew lattices of two descents of the 1st Winter Bridge were restored.

The great works on major repair of the embankments walls were made in the 1960s.

In 1961 the embankment sections adjacent to the 1st Winter Bridge were repaired: from the upstream - on both banks, each 80 meters long, from the downstream - on the right bank, 50 meter long. Upstream the bridge wooden dowel was driven in the foundation, whereas from the downstream the foundation was reinforced by one row of piles and sheet piling. Granite facing was dismantled together with a part of stone masonry that was replaced by reinforced concrete. The work was carried out in a dry pit fenced by webs. It is indicated in the commissioning certificate that 14.5 meter long area adjacent to the bridge and located under the right bank descent was not rebuilt.

In 1964, under the project of A.Kulikov and architect L.A. Noskov, wooden the 2nd Winter Bridge on the Moyka River was rebuilt in concrete one. The bridge was widened; the scope of works included reconstruction of the embankments walls adjacent, both on the Moyka River and on the Winter Canal. On the left bank of the canal the wall was rebuilt in full, on the right bank - the upper part of the existing wall was demolished to increase the height on the approaches to the bridge.

The canal is located in the area of historical development and is guarded by the Committee on State Control Use and Protection of Historical and Cultural Landmarks.

The scene of the opera of P.I. Tchaikovsky "The Queen of Spades" takes place on the embankment of the Winter Canal. Lisa, the heroine of the writing, jumps into the water from Hermitage Bridge.