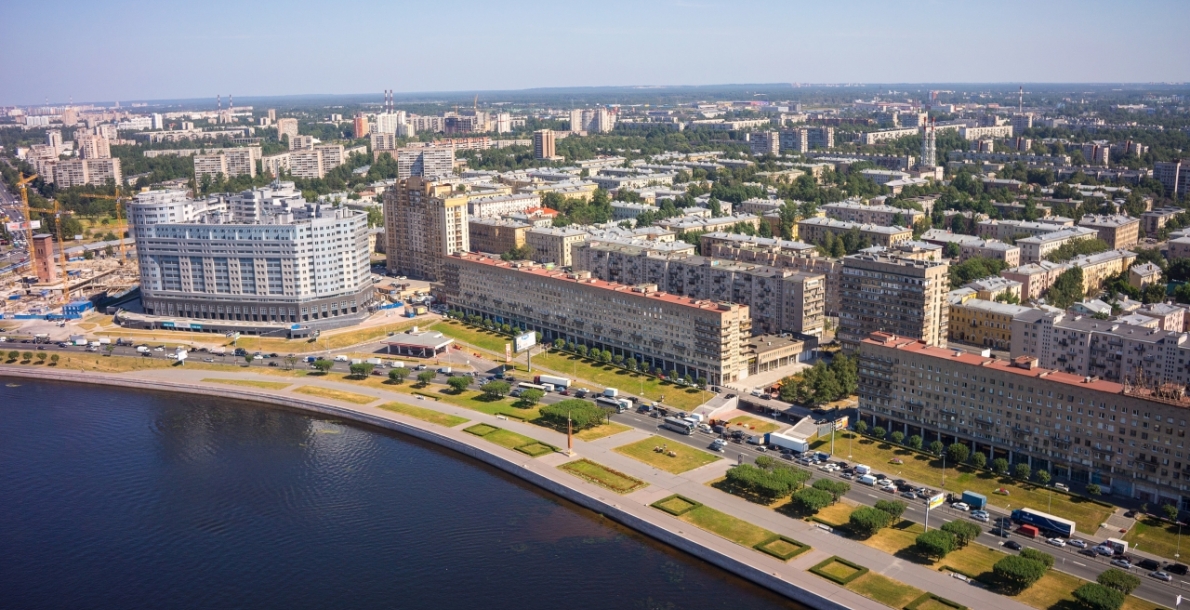 From 1887 to 1925 one of its sections was named Polustrovskaya Embankment. This name comes from the Latin word "palustris", which means "swamp". The area in the river bend near the present Piskarevsky Prospect was swampy, rich with chalybeate mineral springs which medical properties were discovered in the XVIII century. At the beginning of the XIX century, drainage works were carried out and a balneary was built in Polyustrovo which became the centre of a small resort.

In 1868 a great fire destroyed the resort, it was impossible to restore it again. The resort territory was sold out, a new and industrial construction were developed on it. Such future giants of Soviet industry as Leningrad Metal Works, Krasny Vyborzhets, Machine-Building Association named after Ya. M. Sverdlov have been established there.

Sverdlovskaya Embankment is located in a river bend where the flow is accelerated and washes away the right bank. In addition, a maximum depth of the Neva River reaching down to 24.5 meters was marked in Arsenalnaya Street. The historical materials contain the information, while St. Petersburg exists, the river depth at this point is increased down to 2.5 m. At the same place there was a mouth of a small stream, then it was  filled up.

The combination of weak soils and high flow rates makes the bank state unstable. So, in 1927 at this location on the section of 80 meters there was a landslide with a draft of the roadway by 2.5 m with an offset in the river by 3 m. Due to the landslide it was necessary to dismount the tram lines. Landslides took place in 1948, 1957, 1962.

Sverdlovskaya Embankment started to strengthen from the upstream section. In 1967-1970, due to a large-scale housing development on the area from the Okhta River to Piskarevsky Prospect, an embankment with a wide roadway reinforced with the high granite wall with a granite parapet of 1274 m long was created. Along the embankment a spacious walking park with lawns was arranged where one can meet a lot of skaters, families with baby buggies.

The planning concept of the embankment area from Arsenalnaya Street to Piskarevsky Prospect differs from the upstream area. Here, the bank becomes steeper, so the embankment has two levels.  The wall of the second level ends with a cut-off wall on the descent of Vatutina Street, and goes into a green slope. Sidewalks are located at the bottom and the top. The upper sidewalk is separated from the roadway by barrier fencing. The existing 8 m wide passage has turned into a six-lane highway with the width of 24 m.

Currently a large-scale housing construction is performed; Leningrad Metal Works keeps working which is a part of the concern Power Machines. The asphalt surface is frequently updated on the embankment roadway.